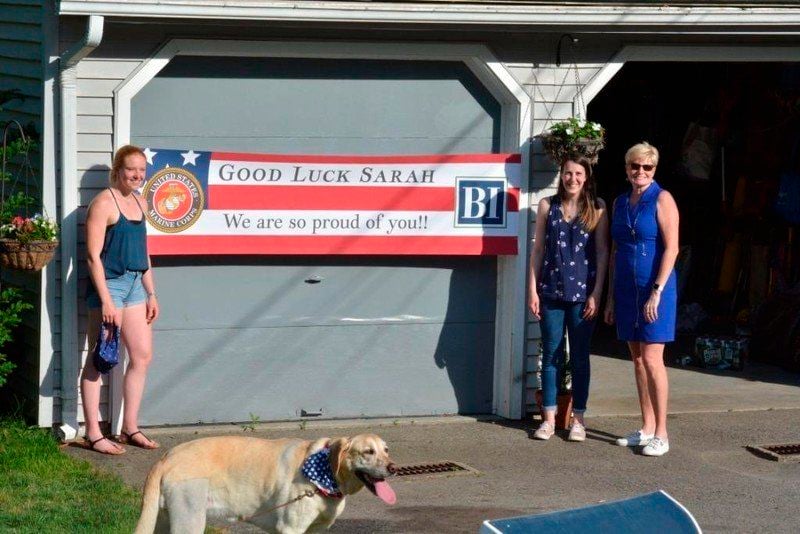 Courtesy. Sarah Dockham, left, is joined by co-workers Amanda Ciofolo and Jennifer Borislow, at right, at Dockham's home in Methuen. Ciofolo organized a car parade to congratulate her on being accepted into the U.S. Marine Corps Officer Candidates School. 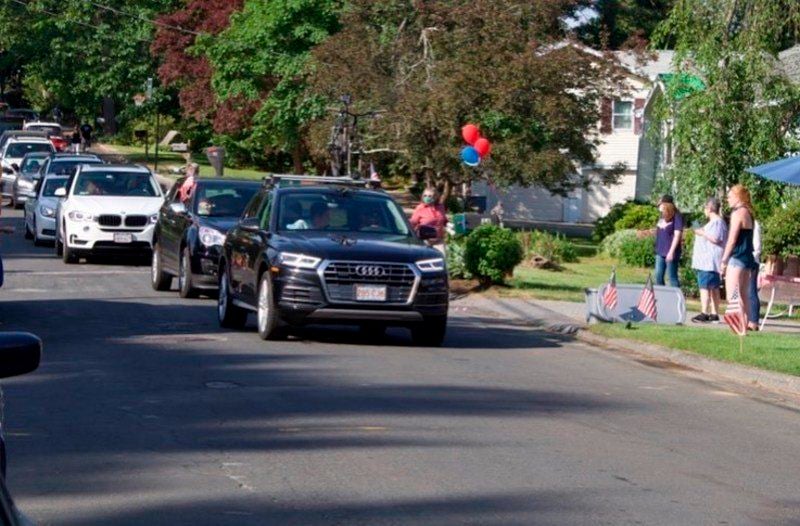 Courtesy. Sarah Dockham, her sisters Kate and Jennifer and parents Sally and Gary, stand on their front lawn as some 35 cars drive by as a way of honoring Dockham for being accepted into Officer Candidates School in the U.S. Marines. 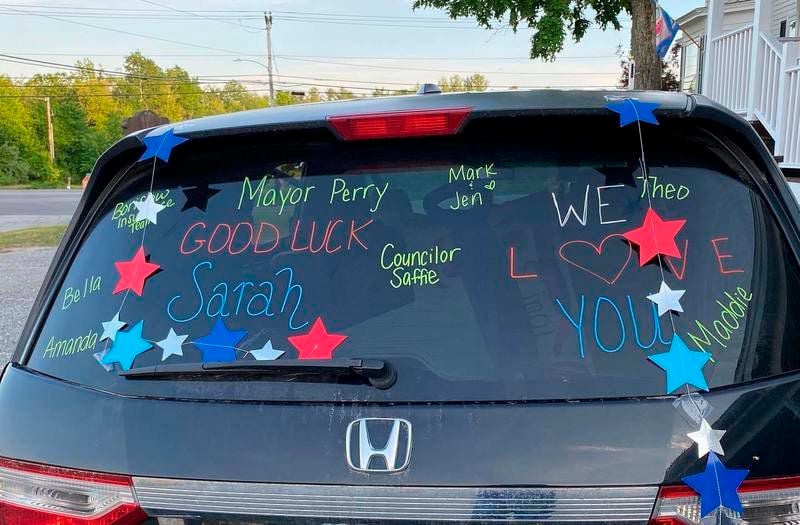 Courtesy. The rear windshield of a car is decorated by well-wishers, including Mayor Neil Perry and City Councilor Allison Saffie.

Courtesy. Sarah Dockham, left, is joined by co-workers Amanda Ciofolo and Jennifer Borislow, at right, at Dockham's home in Methuen. Ciofolo organized a car parade to congratulate her on being accepted into the U.S. Marine Corps Officer Candidates School.

Courtesy. Sarah Dockham, her sisters Kate and Jennifer and parents Sally and Gary, stand on their front lawn as some 35 cars drive by as a way of honoring Dockham for being accepted into Officer Candidates School in the U.S. Marines.

Courtesy. The rear windshield of a car is decorated by well-wishers, including Mayor Neil Perry and City Councilor Allison Saffie.

METHUEN — Days before she left for Quantico, Virginia, to begin her career with the United States Marine Corps, Sarah Dockham was surprised with an enthusiastic and patriotic sendoff.

Dockham, 20, a 2017 graduate of Methuen High School, left last Tuesday for Officer Training School in Virginia, where over the next 10 weeks she and 65 other women in a class of 500 recruits will be put through the rigors of boot camp.

Last Friday as she prepared to depart, she was greeted by dozens of cars decorated with well-wishes and flags as they drove by her family home off Tyler Street.

"I was absolutely blown away," Dockham said. "I saw the first car, it was a neighbor, a retired Marine. Flying over the roof were an American flag and a Marine flag and he was playing the Marine Corps hymn, 'From the Halls of Montezuma, to the shores of Tripoli,'  out of the car windows.

"I was in tears just by that, but then I saw the amount of cars and realized some people must have driven from an hour away."

It hit her then that she never would have made it this far without the help of the people she saw that day, including friends, family, co-workers, neighbors and many others.

"I just finished a long list of thank you notes for every person who drove by," she said. "I know that without their support, I wouldn't be in this position."

She said she'll remember them when things get tough in boot camp and, next year, when she goes through basic training.

"The passing rate, especially for women, is very low," she said. "So when I'm feeling down, I'll remember all those people, to help get me through."

One of those friends, Amanda Ciofolo, said she was driven to organize the drive-by — an increasingly common show of support in the era of social distancing caused by the coronavirus — because she saw how hard Dockham worked to get as far as she's gotten.

"She's an awesome person," said Ciofolo, who has worked with Dockham at Borislow Insurance for the last seven years. "She has a lot of energy, she's very driven and she's worked so hard to get here."

She noted that Dockham, who was a track star in high school, still has "crazy workouts."

"She put so much time and dedication into this, we wanted to show her our support and love," Ciofolo said.

The road to the Marines for Dockham was clearly paved with a lot of sweat and hard work.

As a standout long-distance runner at Methuen High School, where she received numerous awards and accolades, Dockham said her college of choice, Washington College in Chestertown, Maryland, didn't have a track team.

But she spoke with a U.S. Marine recruiter who told her about the workouts officer candidates did every day at a location about an hour from her campus. While she couldn't become an officer candidate until her junior year at the earliest, Dockham joined the group as a freshman and was soon doing the same workouts they were doing.

"It fell together naturally," she said. "Once I started working out with the Marines, I knew I'd enjoy working toward becoming a Marine."

She said despite the fact that women make up just one-eighth of the total number of people in Officer Candidates School, she's looking forward to the challenges and camaraderie that go along with being a Marine.

"It's pretty much the same rigor as men's training," she said when asked if boot camp was just as hard for women. "Being a female in the Marines, it's different than other branches. There are fewer of us, so we are in more of a spotlight."

After boot camp this summer, Dockham will return for a final semester of college. After graduation, she will go back into the Marines for basic training, with an eye toward eventually going to law school and becoming a JAG, or member of the Judge Advocate General Corps.

She said she can go to a law school of her choice, which the government will pay a portion of depending on how long she commits to the Marines for.

It's the kind of work portrayed in one of her favorite movies, "A Few Good Men," where a JAG attorney played by Tom Cruise defended a pair of Marines accused of a crime.

"I could see myself serving into my mid-30s," she said. "It's something I'm really passionate about. I'd like to use my law degree to help Marines and defend their honor."