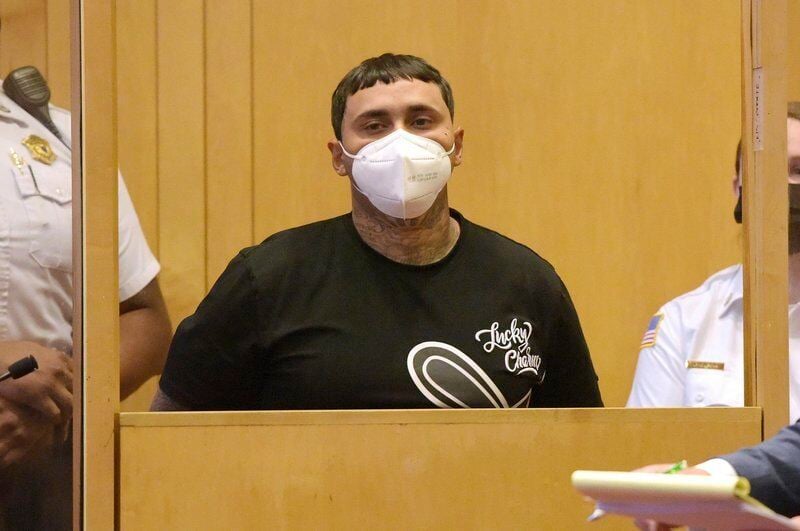 TIM JEAN/Staff photoPedro Nieves stands with a medical mask on during his arraignment Thursday in Lawrence District Court. 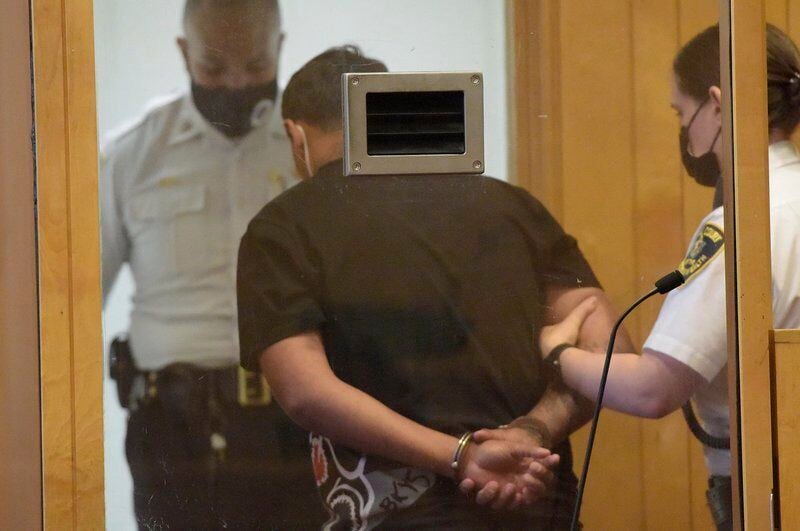 Pedro Nieves is led back to his holding cell in handcuffs. A judge ordered Nieves held without bail following his arraignment Thursday in Lawrence District Court. 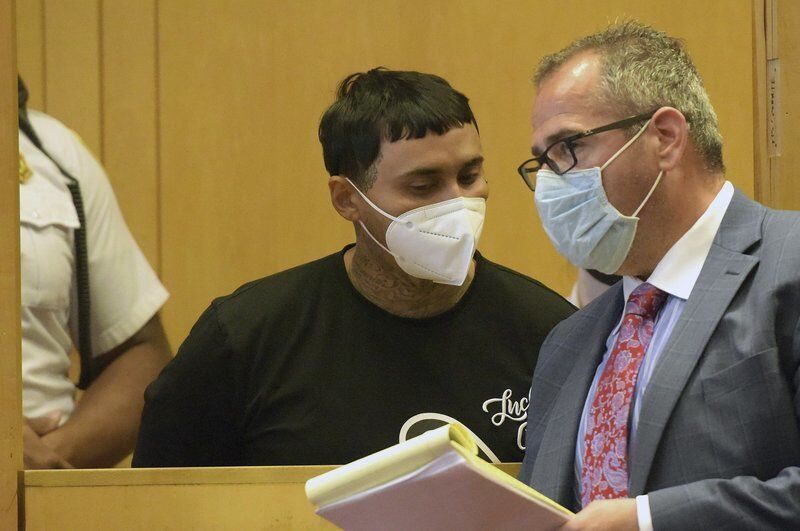 Pedro Nieves talks to his attorney during his arraignment in Lawrence District Court on Thursday. 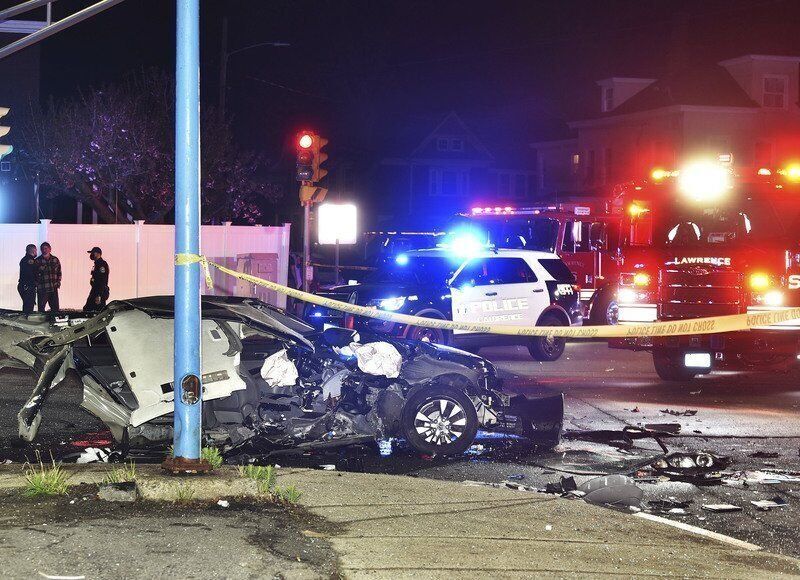 The April 29 crash at Winthrop Avenue and South Union and Exeter streets in Lawrence left one dead and four seriously injured. 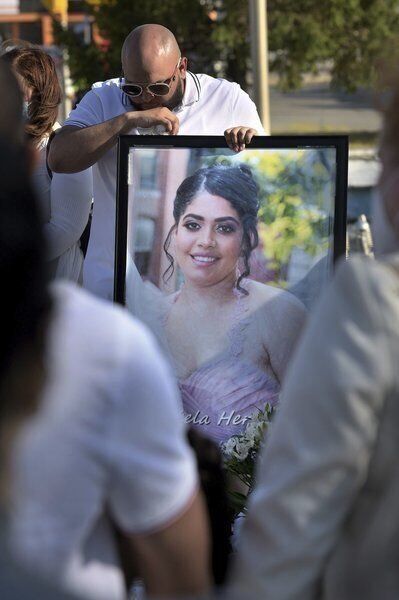 TIM JEAN/Staff photoPedro Nieves stands with a medical mask on during his arraignment Thursday in Lawrence District Court.

Pedro Nieves is led back to his holding cell in handcuffs. A judge ordered Nieves held without bail following his arraignment Thursday in Lawrence District Court.

Pedro Nieves talks to his attorney during his arraignment in Lawrence District Court on Thursday.

The April 29 crash at Winthrop Avenue and South Union and Exeter streets in Lawrence left one dead and four seriously injured.

LAWRENCE — Drunk and in "demon mode," Pedro Nieves blasted his Acura RL through a red light before striking a Honda Civic at more than 100 mph and ripping the small car in half, according to investigators.

The impact of the April 29 crash ejected and killed Gabriela Hernandez, a 24-year-old mother of two young children, and seriously injured several others.

Testing indicated Nieves' blood alcohol content was .17, which is twice the legal limit, according to court papers.

A series of investigators' reports released Thursday detail the intensity of the grisly early morning crash at South Union Street and Winthrop Avenue.

"All available units responded and upon my arrival to this five-way intersection, I observed a very horrific accident scene, with two vehicles (Honda/Acura) totally destroyed. One of the vehicles (Honda) was sheared in half and there were obvious serious injuries to several of the victims, including a fatality," wrote Lawrence Police Sgt. Michael Simard, the patrol supervisor that morning and a lead crash investigator.

Simard noted firefighters were using two set of the Jaws of Life hydraulic tools to extract trapped people from both the Honda and the Acura.

The first officer on scene found the Honda Civic sawed in half, with the back end of the car having careened 100 feet away into the parking lot of a convenience store.

The Honda driver, a 20-year-old Lawrence woman, was trapped in the driver's seat and was later Medflighted to a Boston hospital. Her passenger, Hernandez, was pronounced dead at the scene, police said.

Nieves and his two passengers, Brandon Wiggins, 29, of Methuen, and Jonathan Vega, 31, of Lawrence, were also hurt, police said.

Vega, once freed from the wreckage, offered bystanders $1,000 to get him away from the crash scene, according to Simard's report.

"He stated he was in panic mode and was afraid," according to the report.

Moments after the crash, police were able to access video taken from city-owned cameras at the scene. The footage "clearly revealed, the Acura traveling at a very high rate of speed, south on South Union Street, run the red light and crash into the passenger side of the Honda, traveling east on Winthrop Avenue, in the intersection," Simard wrote in his report.

"The aftermath of the crash was horrific as the force from the Acura split the Honda into pieces, killing the passenger. The Honda had the green light and it appeared the traffic signals in that intersection were functioning properly," Simard wrote.

Police later obtained video evidence showing Nieves getting into the Acura at 12:19 a.m. and driving away. Four minutes later the crash occurred at the intersection.

Detectives estimated Nieves' speed "in excess of 100 mph," according to police.

Vega told police he remembered Nieves' driving on South Union Street prior to the crash.

He said Nieves "gunned it and sped off" and that he told him to slow down.

"...but it was too late, they crashed," Vega told Simard.

Wiggins offered a similar account saying "Nieves stepped on it and went into 'demon mode.' He yelled at him to slow down and saw the red light. By then it was too late, they crashed," according to Simard's report.

Also, Wiggins said he then remembers being pulled out of the passenger's side window of the car.

Friends and family held a vigil for Hernandez in the days after her death.

That morning, she was on her way to Wendy's on Winthrop Avenue to get food with a friend while her husband, Darwin Hernandez, was in the Dominican Republic with their children, ages 2 and 3.

Her sister-in-law, Elizabeth Hernandez, said Gabriela could be initially be shy with people she didn't know.

Once she warmed up to them, though Gabriela was warm and friendly.

"She always had a smile on her face," Elizabeth said, in an interview after the vigil.

Hernandez said she and Gabriela both shared a love of good food. Gabriela was an excellent cook and had perfected many Dominican dishes.

After a funeral service in Lawrence, Gabriela's body was returned to the Dominican Republic for burial.

Nieves is due back in court on June 24 for a hearing to determine whether he poses a danger to himself or others.

However, Salach noted Nieves will likely face indictment on the charges by the Essex County grand jury. If he is indicted, his case will be moved to superior court and another another attorney will be appointed to represent him.