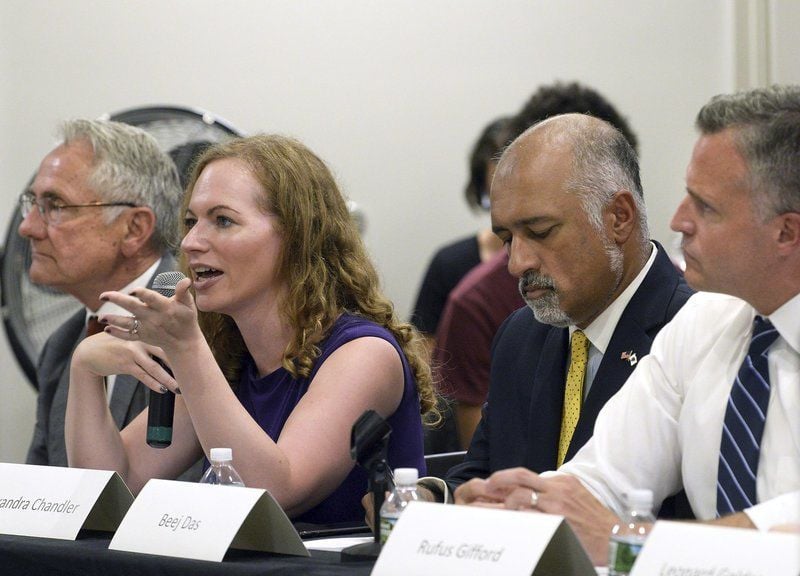 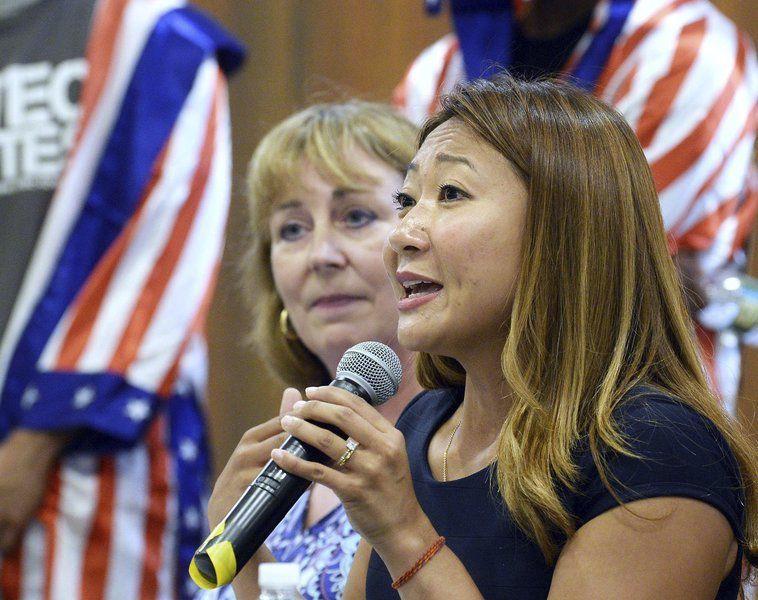 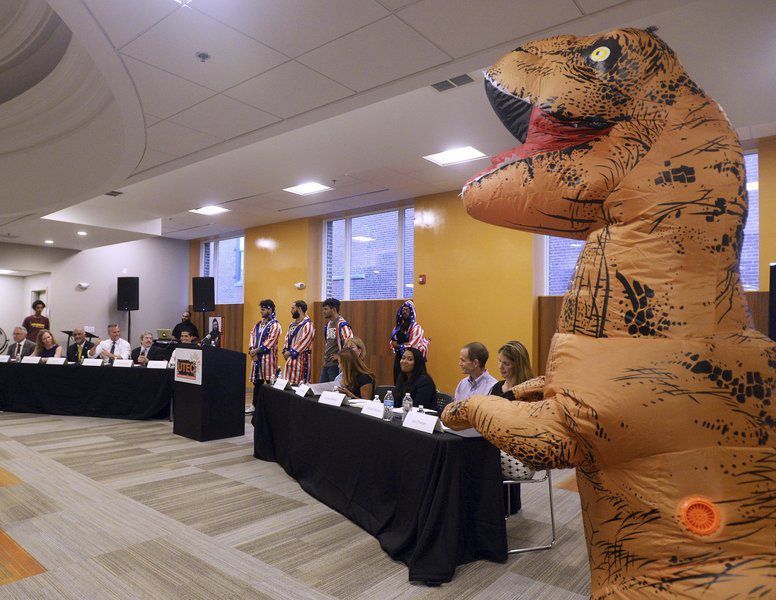 CARL RUSSO/staff photoThe 3rd Congressional District candidates had to deal with T-Rex, the time keeper if they went over the time limit when responding to the question at the  youth-led candidate forum on Wednesday night. 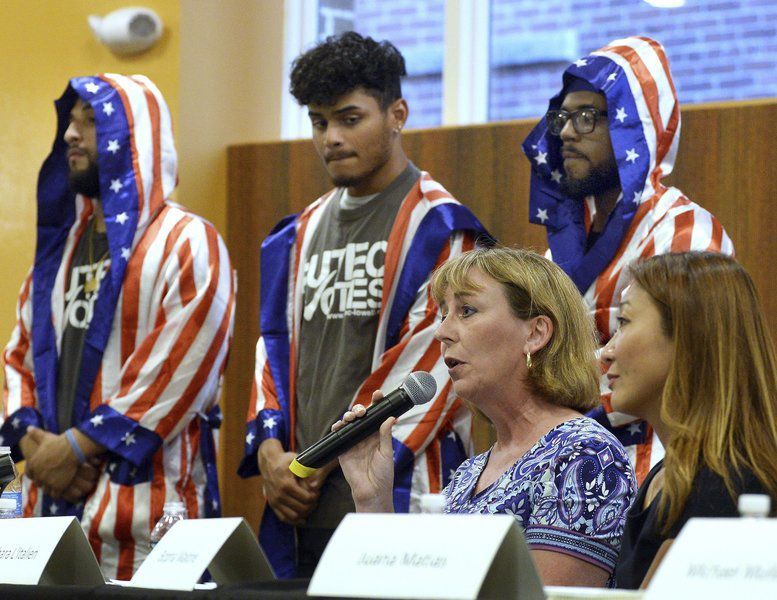 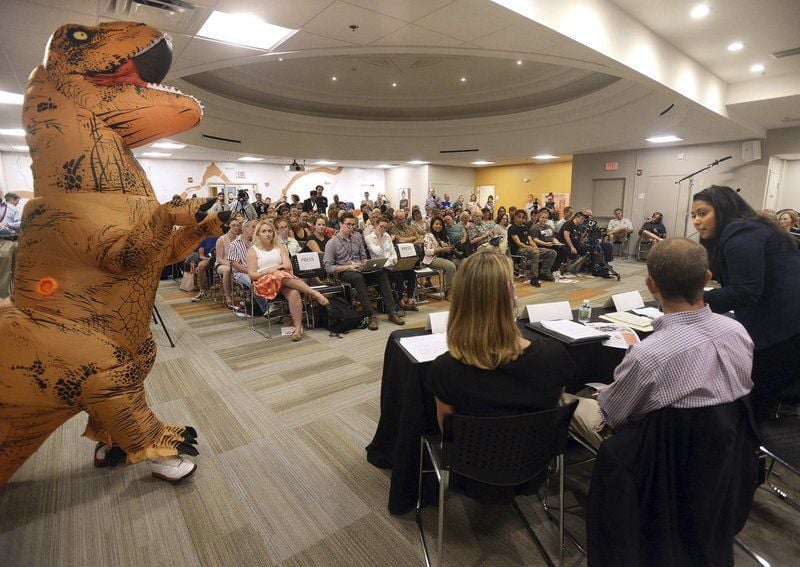 CARL RUSSO/staff photoJuana Matias, 3rd Congressional District candidate starts to sit down as T-Rex the time keeper indicates her time is up to respond to a question with the MA-03 Congressional Candidates in Lowell Wednesday night. 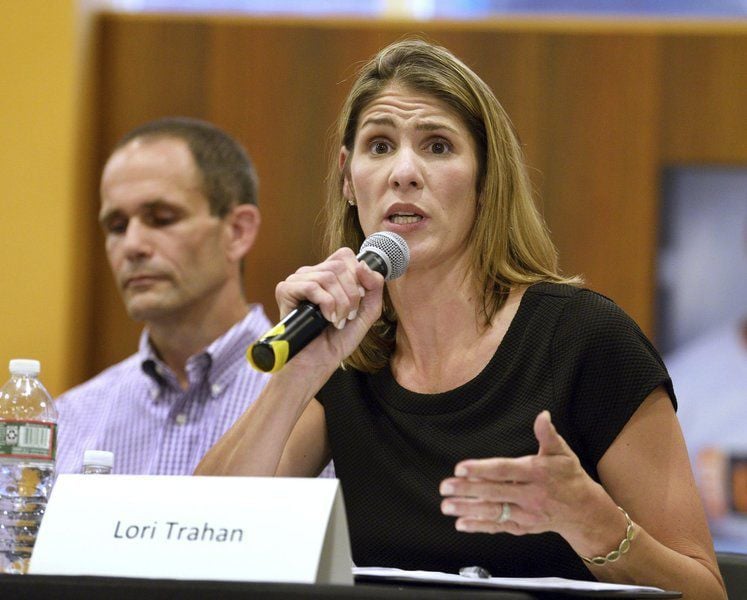 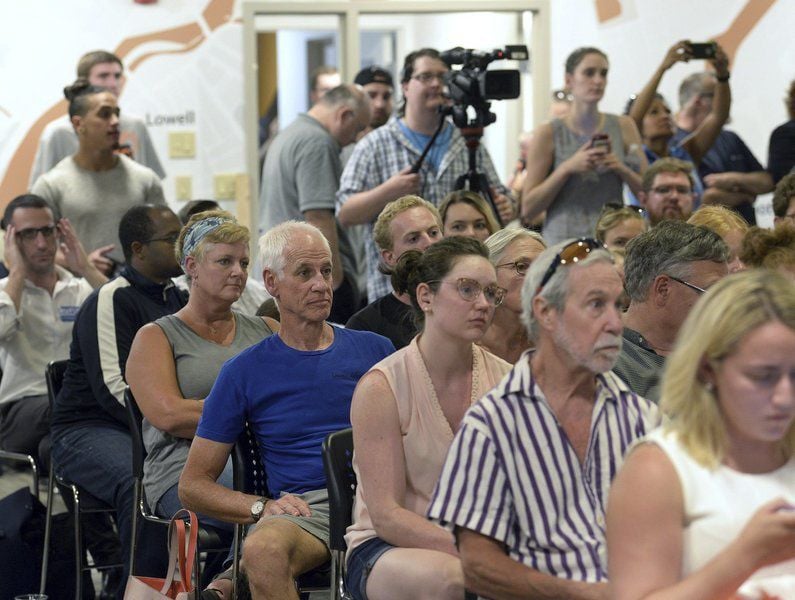 CARL RUSSO/staff photoThe 3rd Congressional District candidates had to deal with T-Rex, the time keeper if they went over the time limit when responding to the question at the  youth-led candidate forum on Wednesday night.

CARL RUSSO/staff photoJuana Matias, 3rd Congressional District candidate starts to sit down as T-Rex the time keeper indicates her time is up to respond to a question with the MA-03 Congressional Candidates in Lowell Wednesday night.

LOWELL — What do you get when you mix 10 Democrats, one Independent, four emcees, a DJ and a dinosaur? A third congressional district candidate forum organized by UTEC youth organization, of course.

Wednesday night, 11 candidates vying for the third congressional district seat gathered at the UTEC Catalyst Center in Lowell to discuss policy questions created by the youth at the organization, which aims to lift "proven-risk" people ages 17 to 24 away from drugs, gang activity and violence.

Candidates had 60 seconds to answer questions ranging from criminal justice reform to services for mental health and substance abuse, to housing access and combatting homelessness. In an effort to effectively manage time with such a crowded field, a man in an inflatable T-Rex suit would waddle over and wave his tiny arms to cut candidates off.

What issue would you lead on regarding comprehensive criminal justice reform?

Koh: "End the senseless war against marijuana ... disproportionately affected people of color for far too long ... Federal legalization of marijuana."

L'Italien began her first answer by stating, for the record, that she is not Ann Kirkpatrick, alluding to her campaign's recent stunt to get airtime on Fox & Friends and call out President Donald Trump.

She said she would eliminate the school to prison pipeline, decriminalize minor infractions for marijuana and other substances, ensure the court system isn't locked into mandatory minimums, and expunge records for nonviolent drug offences.

Malone focused on restorative justice, and programs like UTEC and Girls Inc, that help mentor young people as opposed to "continuing to put them in prison."

Matias said the criminal justice bill passed in the statehouse doesn't go far enough. "When (inmates) are about to be released, we spend no money to make sure they have access to substance abuse services," she said. She also spoke of how the criminal justice and courts system disproportionately affects communities of color, and said she would focus on what happens after people are released back into society.

Mullen, the independent candidate, said he would remove the "profit motive" in the criminal justice system, which is a "role for government" not business.

Trahan called for "banning the box," referring to a push for employers and school admissions officers to not ask people about their criminal backgrounds. She also called for ending mandatory sentencing for nonviolent drug offences.

Chandler said her number one priority would be to decriminalize marijuana at the federal level, citing disparities in application of marijuana laws to people of color and of low income communities. She also supports expungement of records and "reducing or eliminating cash bail".

Beej noted his time working as a law clerk to a chief judge in Maryland, where he did drug sentencing. He called for records expungement and the end of private prisons.

Gifford focused on the value of community in criminal justice reform.

"The federal government has an enormous role to play to help organizations, frankly like this one we're sitting in right now, to get rid of crimes against oneself," he said. "Our prisons are overloaded with people who've committed the crime of drug possession, those are people who need treatment, not imprisonment."

Matias said she would work to increase resources within prisons, such as caseworkers and mental health providers, and again touched on resources for inmates once they've been released.

Mullen said he would take a "multipronged approach."

"I don't think we can treat mental health separately as physical health," he said.

Trahan said the issue of opioid addiction goes hand in hand with mental health, and noted how hard Lowell, Lawrence and Haverhill have been affected by the opioid epidemic. She said she supports Senator Elizabeth Warren's CARE Act, which would send $100 billion across the country over 10 years to combat the opioid epidemic, and would advocate for early education.

Ballinger focused on getting the "Democratic party back from corporate interests," and for reallocating money from the defense budget to social issues.

Chandler, noting that she is transgender and had mental health issues herself, said access to quality healthcare is necessary.

"For people to have access to the best mental health providers for them, a single payer health system, that's the key," she said.

Das said he has weathered two overdoses in his campaign office, and said the healthcare system has "impersonalized" many issues. He said he would augment early childhood education, mental health services, and drug intervention programs.

Gifford advocated for Medicare for All, and said "we need to combine mental health services associated with addiction with the larger healthcare industry in the U.S."

Golder said he would work to end the stigma around mental health issues.

"We need a strong healthcare system that pays for and allows, and doesn't stigmatize, the whole issue of mental health."

Koh agreed with Golder about ending the stigma, noting that he grew up with a learning disability and used to take medication in a bathroom stall "because I was afraid people would find out I had a mental issue."

L'Italien, whose campaign slogan is "mom on a mission," said she is the mother of a child with autism who saw two of his friends die from overdoses recently, and noted she is endorsed by MassCare, the statewide campaign for Medicare for All.

Many young adults at UTEC are struggling to find a stable household. How would you address this issue?

Ballinger said he would advocate for unions to organize freely.

Chandler called for increased Housing and Urban Development funding, while also advocating for smaller developers to have a fair chance in communities.

"Big developers don't have to be part of the solution when these grants come in," she said.

Das said "gentrification and the success of the university" have enhanced the problem of affordable housing in Lowell and beyond, noting that he's part of the gentrification problem.

"We don't have the jobs to support that kind of cost structure," he said, referring to housing costs compared to the price of tuition, "We need federal grants that will support housing that allows young people to get a start in life without having to suffer and face homelessness."

"We have a HUD secretary in Carson that seems not to care about this issue...since the onset of the Trump administration, we've seen housing programs slashed slashed slashed."

Golder, drawing on his 12 years experience on a planning board, said "we need to create greater supply of housing, and we can't go back to the era of 1950s where we build public housing, public housing doesn't work ... the affordability rate has to be lower, and incentivize people to create more housing, and more affordable housing."

Koh also called for an increase in housing supply, drawing on his time as chief of staff with Boston Mayor Marty Walsh and that office's efforts to deal with the city's housing crunch.

L'Italien said housing is one of the "most vexing issues I deal with every day" as representative for Lawrence.

"It's disheartening when 700 people show up for 70 units," she said, and called for a wide range of housing opportunities from starter houses for families, to apartments for college students, to downsizing options for the aging population who wants to remain in their community.

Malone addressed the UTEC youth directly, and said nobody should have to experience the threat of homelessness.

"In Massachusetts right now there are over 17,000 people who are homeless ... due to no fault of their own, basically unpaid medical bills and loss of jobs ... it's important to create jobs and make sure people have at least a minimum wage to afford" housing.

Matias said the cost of living in Lawrence has increased from $900 for a 1 bedroom apartment to roughly $1,400, and called for a more integrated housing system.

Mullen said the laws on the books today need to be enforced, such as the Fair Housing Act, which protects buyers or renters from landlord discrimination, making it illegal to refuse to sell or rent to any person because of their inclusion in a protected class.

He said he is running as an independent because the current party system is broken, noting the influence the real estate lobby has on politicians, and called for more transparency.

Trahan said she would focus on public and private partnerships, and getting people on a path to education that gives them the skills necessary to succeed in the economy while not leaving them in debt.

There are 20 days until the primary election, on Sept. 4. Voters will narrow the dense field of Democrats trying to distinguish themselves as the best candidate for the district, while largely agreeing on most policy issues.

Massachusetts has a semi-closed primary, meaning voters affiliated with a political party can only vote in that party's primary, and unenrolled voters can pull the ballot of a party of their choice.