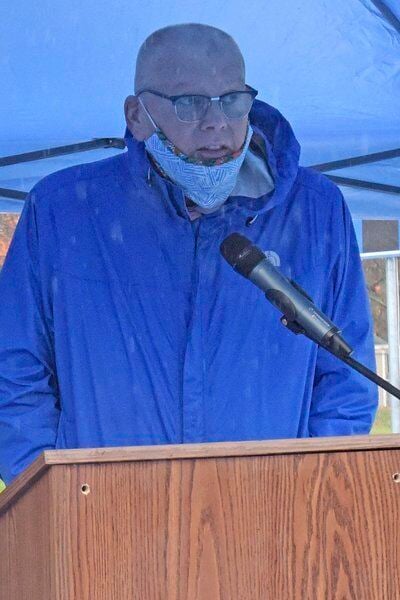 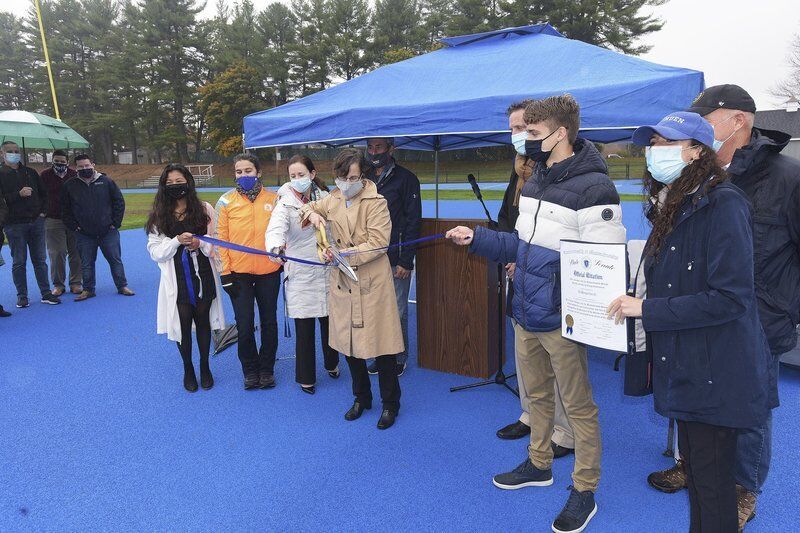 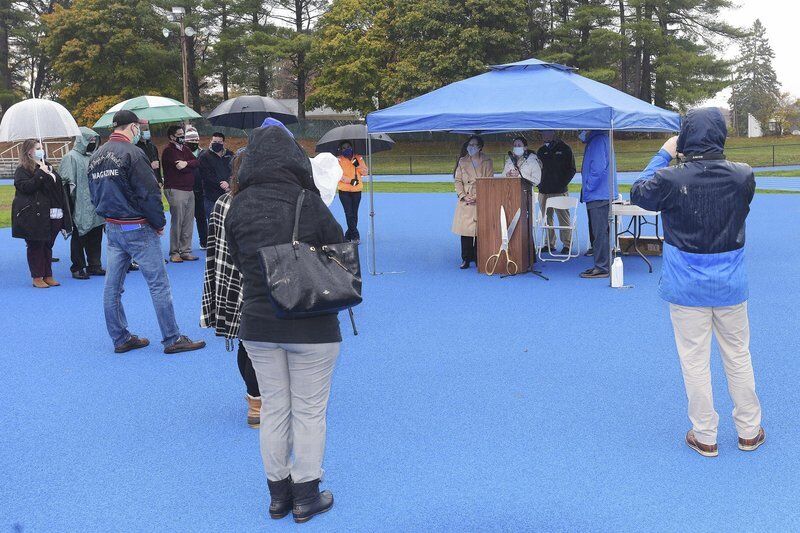 TIM JEAN/Staff photo. A small crowd of city officials gathers in the rain as Methuen Superintendent of Schools Dr. Brandi Kwong speaks at the podium during a ribbon-cutting ceremony for the Nicholson Stadium Outdoor Track. The running track was fully reconstructed and has a new surface, extra sprint lanes, new fencing and improved event areas. 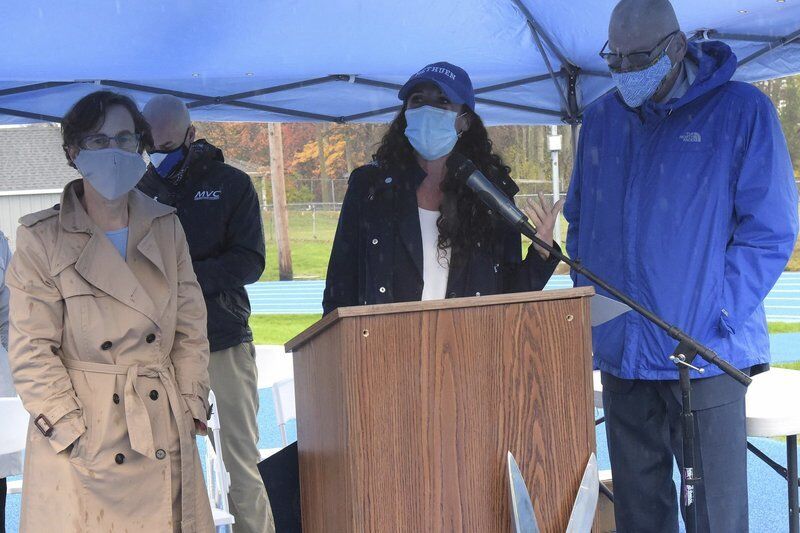 TIM JEAN/Staff photo. A small crowd of city officials gathers in the rain as Methuen Superintendent of Schools Dr. Brandi Kwong speaks at the podium during a ribbon-cutting ceremony for the Nicholson Stadium Outdoor Track. The running track was fully reconstructed and has a new surface, extra sprint lanes, new fencing and improved event areas.

METHUEN — Renovations to the Methuen High School track have been completed and the track is now ready for those who are fleet of foot.

State and local officials gathered recently under tents as rain poured down around them for a ribbon-cutting ceremony to commemorate the opening of the new, Ranger-blue track.

“Significant wear and tear on the track left it in such disrepair that Methuen student-athletes could not host competitive meets with other communities,” said Methuen state Rep. Linda Dean Campbell, who secured $200,000 in state funding to help pay for the $550,000 project.

“Because of the renovations, the track is now suitable for athletic events and everyday use," she added. "I am very much looking forward to Methuen hosting its first meet."

Since track is a spring sport, it won't be used until next year for competitions. However, it is available for general use by the community and student-athletes.

"It provides a safe place to walk and exercise, and the timing could not be better with the need for all of us to be outdoors as often as possible," Campbell said. "I am so thankful for the strong support of my Methuen delegation colleagues for this project, as well as the work of Mayor Neil Perry, Community Development Director Bill Buckley, and schools Superintendent Brandi Kwong to ensure that this state funding was put to work in the timeframe required — not an easy task.”

Buckley said the project is being paid for through a mix of funds, although one piece of the funding remains in limbo.

He said in addition to the $200,000 in state money, another $100,000 was taken from funds left over from the stadium rehabilitation project. The stadium was refurbished about five years ago with new visitors' bleachers, two turf fields and a clubhouse among other upgrades.

The final, $250,000 piece of the funding for the new track was set to come from the company Clear Channel, which owns a billboard on Merrimack Street. The company agreed earlier this year to pay the city $25,000 a year over 10 years in return for the city giving the company approval to convert the billboard from a traditional sign to a digital one.

Buckley, however, said the company has run into some kind of problem.

"It hasn't come to fruition yet," he said, adding that if Clear Channel fails to come up with the money the city would "bond an additional $250,000" and pay for the remainder of the track project using taxpayers' dollars.

"It's a done deal," he said, referring to the Clear Channel contract. "It's been accepted and agreed to, but they are experiencing some COVID issues."

Those details didn't deter the ribbon-cutting event from going forward, however, as a number of state and local officials, including Sen. Diana DiZoglio, Athletic Director Matt Curran, Mayor Neil Perry and even some student-athletes gave short speeches touting the importance of the new track.

“The effort and work that went into this new track is amazing,” said Perry. “I am so thankful to everyone involved in the process and extremely happy with the results. This new track is a plus not only for our scholastic athletes, but for our citizens and visitors who regularly use the track to stay active and fit.”

School Superintendent Brandi Kwong added: “I am so pleased and excited about the new track. It will allow our Methuen High School track and field program to host home meets for the first time in years. Moreover, it is another addition to our ever-improving athletic facilities. ... This track and field will be enjoyed by so many youth and adults for years to come."

Curran said the last time track meets were held regularly was in 2012.

Since then, even home meets are held in opposition venues.

"Having to travel has been frustrating," he said. "To be able to host home meets is huge."

"In the couple weeks it's been renovated, a couple athletes have already been up there," he said. "It's great to see the kids come back."