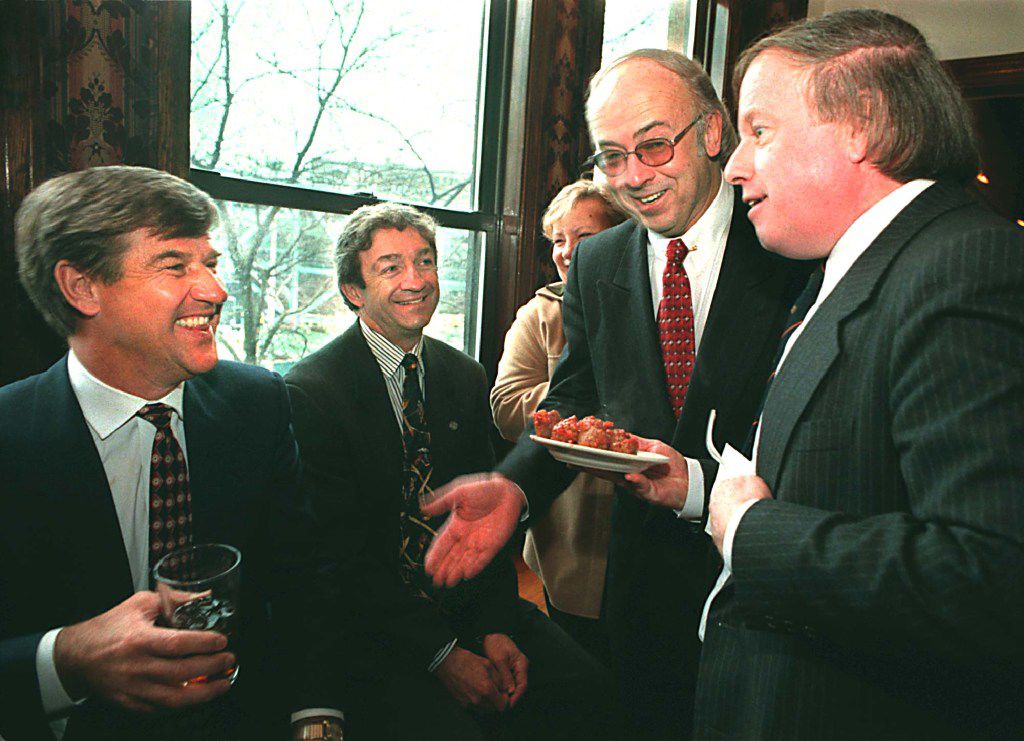 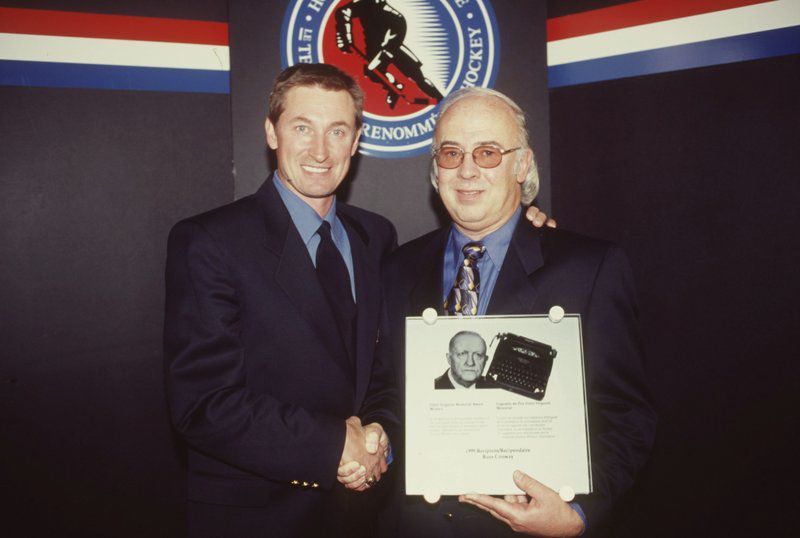 Courtesy photo/Toronto SunRuss Conway and Wayne Gretzsky shake hands at their induction into the Hockey Hall Of Fame in Toronto, Canada. 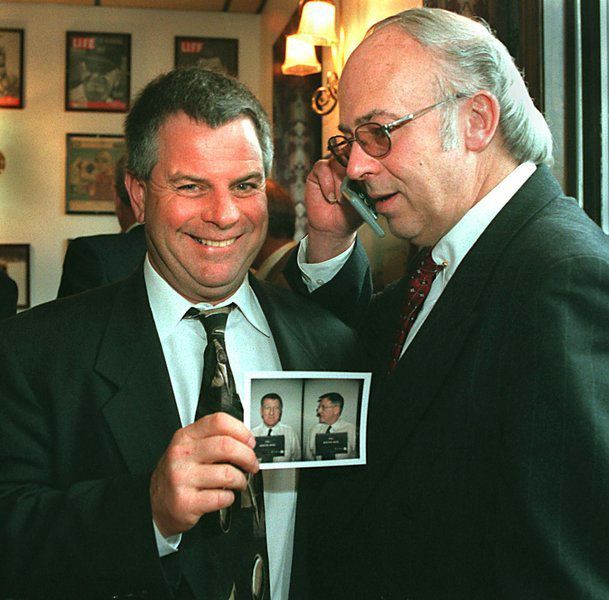 Then FBI agent Tom Daly, left, holds the mug shot of Alan Eagleson, as Russ Conway takes a call on his cellphone during the party to celebrate Eagleson's plea at The Fours on Canal Street in Boston in 1998. (Staff file photo/Judy Emmert) 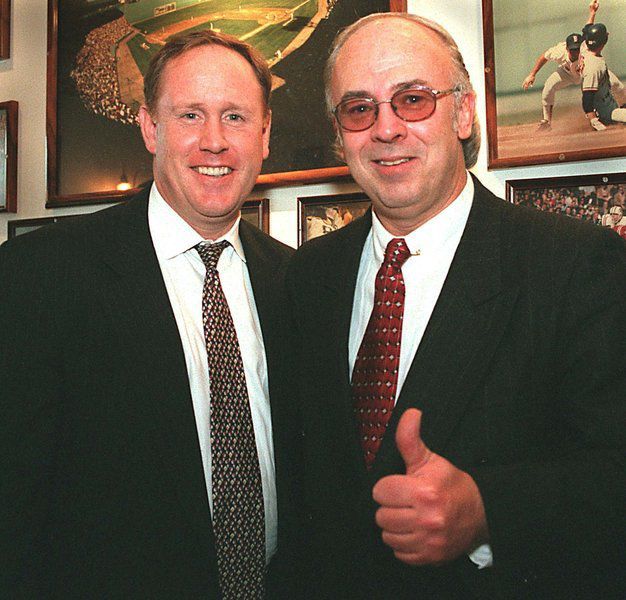 Courtesy photo/Toronto SunRuss Conway and Wayne Gretzsky shake hands at their induction into the Hockey Hall Of Fame in Toronto, Canada.

Then FBI agent Tom Daly, left, holds the mug shot of Alan Eagleson, as Russ Conway takes a call on his cellphone during the party to celebrate Eagleson's plea at The Fours on Canal Street in Boston in 1998. (Staff file photo/Judy Emmert)

Russ Conway wore many hats during his life.

Most people knew him because of the four decades he spent in the newspaper business, and five decades in the auto racing business.

Conway’s thousands of hockey stories and exposé of corruption in pro hockey earned him entrance into the Hockey Hall of Fame in 1999.

A few years later, again after hundreds of stories and more than a thousand auto racing promotions, he entered the New England Racing Hall of Fame.

But the most heartfelt of tributes since Conway’s death earlier this week, particularly from those who knew him well, are more about the person than the investigative reporter or race promoter. Here are three personal stories from those who knew Conway best.

His best bud ... and Bruins legend

When Conway was an intern at The Eagle-Tribune in the late 1960s, one of his early duties was a “dream job” — covering the Boston Bruins. He forged a relationship with a brand new Bruins player from Parry Sound, Ontario.

“Russ started covering the team and we would talk a lot, more than a writer-player relationship,” said Bobby Orr, who would go on to play a dozen seasons in the NHL, 10 of them in Boston. “I can’t explain it other than we became friends. I trusted him. I was younger than a lot of guys on the team. Russ and I were the same age.”

Their friendship grew over more than five decades. They spoke at least weekly, sometimes more often.

After Orr’s hall-of-fame career was cut short due to injuries to both knees, Conway convinced the all-time hockey great to be the guest of honor at a dinner for local youth who’d won an essay contest. Orr and Conway did the Good Sport Essay Contest for 15 years, honoring more than 2,000 boys and girls who were each invited to a dinner, with one guest, to meet and hear Orr talk about what it meant to be a good sport.

Over the years, Conway would stop by the Orr home for the holidays, oftentimes bearing gifts for his children.

“He took our family to some go-kart races, and my boys loved it,” said Orr. “Next thing you know, we have a go-kart sent to the house from Russ. I though he was crazy. But that’s the guy he was, as thoughtful a person I’ve ever met.”

Upon hearing Tuesday of Conway’s passing, Orr said it felt like losing a family member.

“A few things struck me about Russ,” he said,. “He didn’t ask for anything. That means a lot to me.

“And in terms of his character, I’ll never forget when this movie company from Hollywood wanted to possibly make a movie about his book (“Game Misconduct,” about the scandal in pro hockey). When he met with them, they talked about things they wanted to change. They basically wanted control.

Bentley Warren is one of the most successful drivers in New England auto racing history, having twice competed in the Indianapolis 500.

Like Orr, Warren forged a friendship with Conway that lasted.

“Russ Conway is one of the biggest contributors to racing in New England ever,” said Warren, 78, who owns a successful trucking business, Bentley Warren Trucking, in Ipswich.

“He started following me around in the early 1960s when I was running stock races in Groveland (Pines Speedway) and Hudson (Speedway), New Hampshire,” said Warren. “He was this kid writing racing articles that went out in pamphlets. I was winning races and he was interested, which helped me a lot.”

“I needed the support back then, and he was a big help,” said Warren. “One thing led to another, and we became friends. Then we became great friends. The last few decades I’ve considered Russ one of my best friends.

“It wasn’t just me but other drivers and people in the racing business,” said Warren. “He really learned the business and started promoting races, and we did a lot together.”

“What Russ has done for racers and families of racers who have been hurt or killed is beyond special,” he said. “He is incredible at fundraising. We had someone who died and the family couldn’t afford to pay for the funeral, and Russ got a bunch of well-off people to donate about $500 apiece to help pay.

“When he was inducted into the Hockey Hall of Fame in Toronto, there was no way I was going to miss that,” he said. “I rented a tuxedo and had the time of my life watching him. I was shocked at how many well known people knew and loved Russ. It was just like the racing community.”

Warren saw up close Conway’s ability to promote racing, many times over the years, including during annual trips to south Florida for a five-race circuit there.

“Russ would print out fliers, maybe a thousand, which people don’t do any more,” he said. “He’d maybe get drivers to bring their stock cars to a mall, signing autographs, and talking about the five races they were competing in.

“It was amazing how Russ would drum up interest. He always had great ideas,” he said.

During his journalism career, Conway became an intrepid investigative reporter. In the early 1970s he crossed paths with the FBI.

Tom Daly, then with the Boston office of the FBI, remembered getting a phone call about inside information on a race-fixing scandal at Suffolk Downs.

Howie Winter’s gang, known as the Winter Hill Gang, was under investigation. Conway was at the other end of the phone.

“I was skeptical at first, getting information from the media,” said Daly. “But he had some interesting tidbits. I went to my superiors to see if I could meet with Russ and got permission.

“He had great information,” said Daly. “Honestly, Russ was like a dog on meat. He was all over it.”

Daly and Conway remained friendly over the years that followed. It was nearly two decades later when Conway was hot on another story, about corruption high up in the National Hockey League’s Players Association, involving its executive director, Alan Eagleson.

Because former Bruins were involved, including some who lived locally, it was a local case for the Boston FBI office.

“The hockey case was a different ballgame,” recalled Daly. “We talked almost every night. The case doesn’t get done without Russ pushing and pushing. The Justice Department wasn’t really interested in pursuing because there were two jurisdictions (Canada and the United States).

“But Russ gave us so much good information that nobody else had, that the Justice Department decided it was a go,” he said. “It was amazing work, over seven years of hard work. But it was worth it.”

Eventually Eagleson was charged in both the United States and Canada on charges of fraud and embezzlement. While seeing him leave a courtroom in handcuffs was a victory, Daly said the bigger prize was his relationship with Conway.

“We became not good friends but great friends,” he said.

“I really got to see what kind of person he was when one of my sons (Tim) was in a very serious car accident,” he said. “He was in a coma and not expected to live.

“Well, ‘Uncle Russ’ as my kids know him, was there once a week for the five weeks he was in the hospital,” said Daly. “He would sit with my wife, Pat, and I for a few hours each time. It was beyond the call of duty.”

Conway visited several times during rehab, while Tim was still in a daze. During one visit, he got Tim to smile for the first time.

“What he did for my family will never be forgotten,” said Daly. “My son later made a miraculous recovery. And Russ became more than a friend.”

Daly said Conway had many of his own personal health struggles throughout the past decade, some of which involved hospital visits and operations.

“It was amazing. You’d see him. He wouldn’t look great. The news wasn’t great.

“Then, a few months later he was better,” he said.

“I knew he was going through some struggles recently,” said Daly. “He had a cane. He had lost weight. But to be honest, I thought he’d bounce back. He always did.

Bill Burt is executive sports editor of The Eagle-Tribune. Email him at bburt@eagletribune.com. Follow him on Twitter at @BurtTalksSports.