NORTH ANDOVER — School officials have threatened a third North Andover High student who alleges she was sexually assaulted by a fellow classmate with suspension or possibly a call to police if she fails to comply with the terms of a School Safety Plan.

The North Andover School District's practice of using School Safety Plans became public last week when several students came to The Eagle-Tribune with documents supporting their allegations of sexual assault and the contracts the school asked them to sign.

The "safety plans" limit the movement of the girls around the school to keep them away from their accused attackers.

Attorney Wendy Murphy, a professor of sexual violence law at New England Law School in Boston and a former Middlesex Country prosecutor, believes the North Andover School District could be sued for issuing the contracts because they violate state civil rights laws and the Massachusetts Constitution.

She also said "it's not uncommon to see a school retaliate against a victim" in the same ways.

A student’s liberties cannot be restrained for bringing another student to court, Murphy said.

"It is grotesque that the school is calling them safety plans," because they restrain the victim, she said.

The Eagle-Tribune has reported the stories of two young women who allege sexual assaults occurred while they were students at North Andover High, both accusing the same boy, Eliezer Tuttle. Both girls were asked to sign their own School Safety Plans, limiting movement around the school to avoid their attacker. One signed, one did not.

Tuttle, an 18-year-old senior, was charged with raping a girl twice in Salem and Epping, New Hampshire, last month. He was on probation at the time for sexually assaulting one of them, a classmate, and had been investigated by police for allegedly raping the other, according to police and court records.

The mother of a third female student came to the newspaper with a similar experience Monday, which she described and provided documents to support. That case did not involve Tuttle, but a classmate whom the girl once dated and against whom she now has an active restraining order.

The Eagle-Tribune does not name victims of sexual assault without their consent.

According to documents provided by the girl, there was an investigation by the school, required by federal Title IX standards. It delved into five reported instances of sexual assault between the girl and her ex-boyfriend. She described assaults inside and outside the school between August and September 2018.

An outline of the investigation appears in an Oct. 16, 2018, letter sent to the girl's guardians. It is signed by high school Assistant Principal Brooke Randall.

Unlike other School Safety Plans brought to The Eagle-Tribune, this one includes detailed consequences. 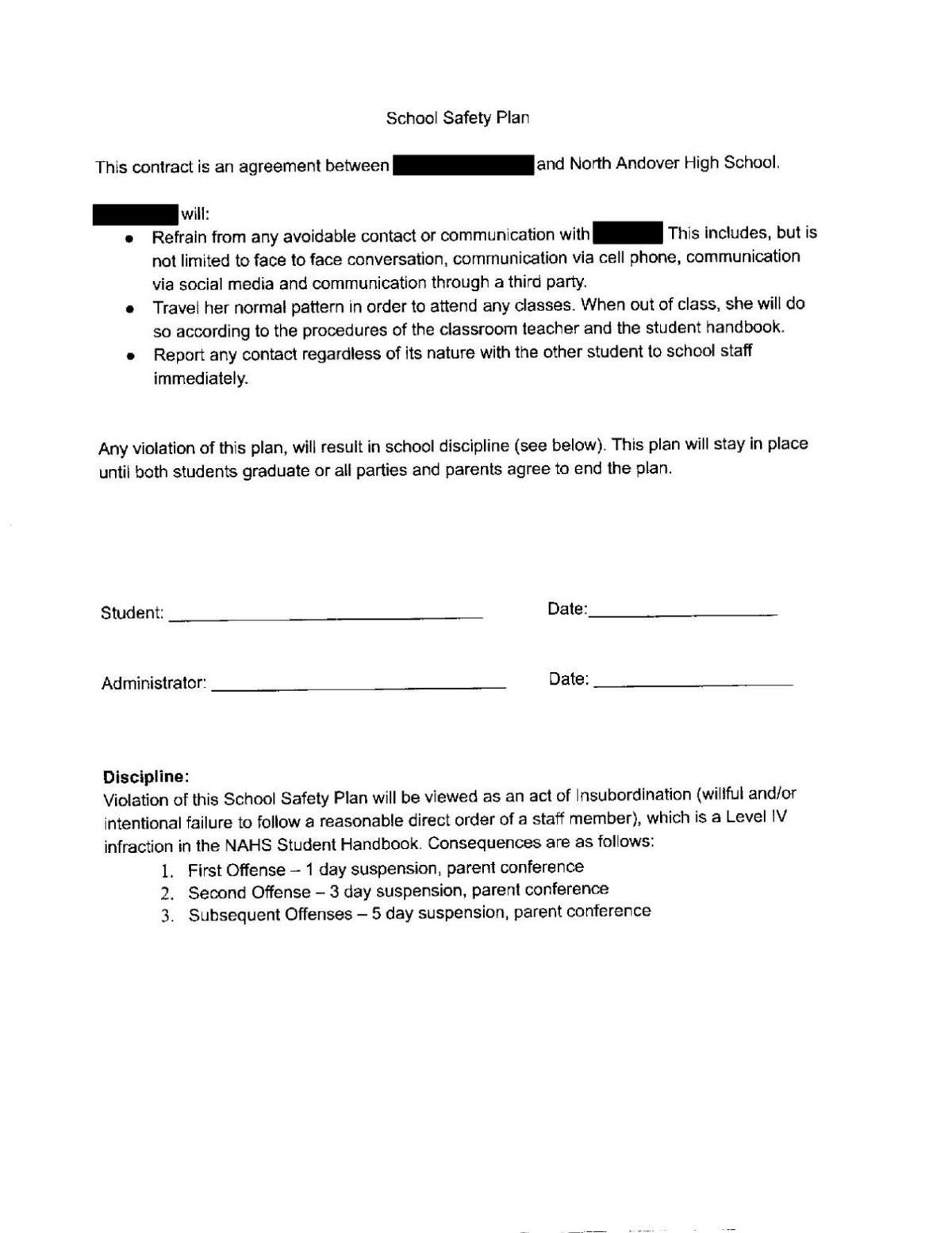 If the girl who says she was assaulted doesn’t follow her plan, she will be suspended for a day for the first offense, three days for a second offense, and five days for subsequent offenses.

The offenses are considered “insubordination,” the contract states, and considered a “Level IV infraction” in the student handbook. That means police could be called, according to the handbook.

Gross disrespect, gambling, stealing, lying, forgery, fighting and vandalism are also listed in the handbook as Level IV infractions. The most serious infractions are labeled Level VI: starting fires, bomb scares and assault. In those instances "police and/or fire will be notified, charges may be filed," the handbook reads.

In each case The Eagle-Tribune has reported, Superintendent Gregg Gilligan said he cannot comment on specific cases. He also repeatedly declined to answer general questions about when School Safety Plans are used.

After investigating the latest girl's assault claim, school officials decided that conflicting statements made it “not possible to establish beyond a preponderance of the evidence that Student A did engage in gender-based harassment, inappropriate sexual communications or contact of a student at North Andover High School under Title IX.”

“In the first instance of reported assault, (the girl) stated that she was visiting Student A (her accused attacker) at their place of employment approximately two weeks before the start of school,” the letter reads.

The girl said the other three assaults happened in stairwells and isolated hallway areas in North Andover High School, as well as in a hallway between the cafeteria and auditorium.

“Statements made by both (the girl) and Student A (her accused attacker) were contradictory on several points,” the letter reads. “Witness accounts could not corroborate either student's narrative of events.”

One witness, however, confirmed that the girl was in the hallway with her accused attacker when she said she was, according to the letter.

The week after the school’s investigation wrapped up, the girl obtained a restraining order from Lawrence District Court against the boy she said attacked her. Police were not informed, meaning criminal charges were never brought against the accused attacker.

The restraining order required him to stay 100 yards from her, not go to a store where she works, and states, “You are ordered to stay away from the plaintiff’s school located at North Andover High School.” 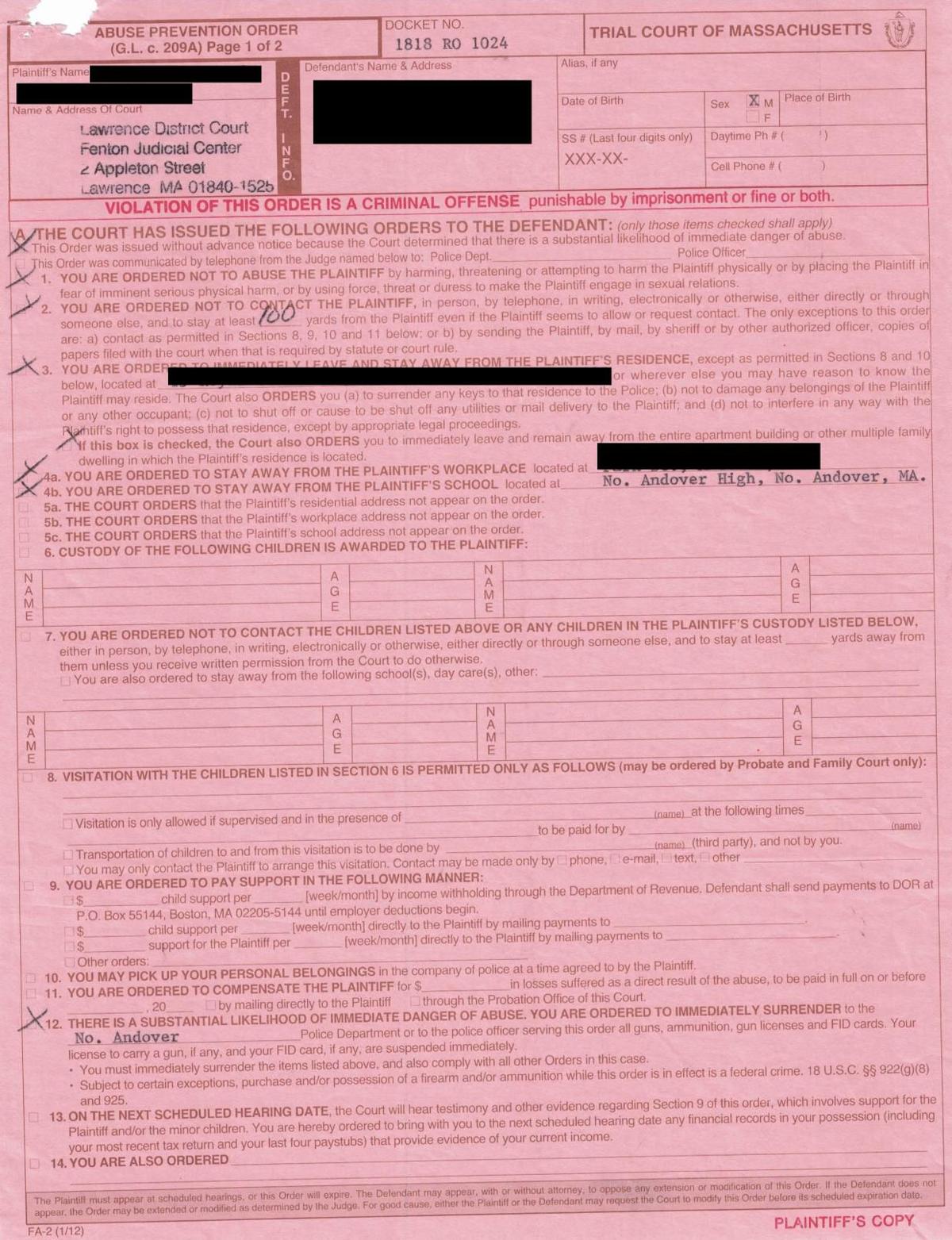 But the boy still wanted to go to school, court documents explain, so he asked Judge Holly Broadbent to alter the restraining order against him.

In a new order dated Oct. 23, 2018, the judge decided that the boy was allowed at school, but that he had to stay 10 yards away from the girl seeking the restraining order at all times and abide by the School Safety Plan in place for both parties. 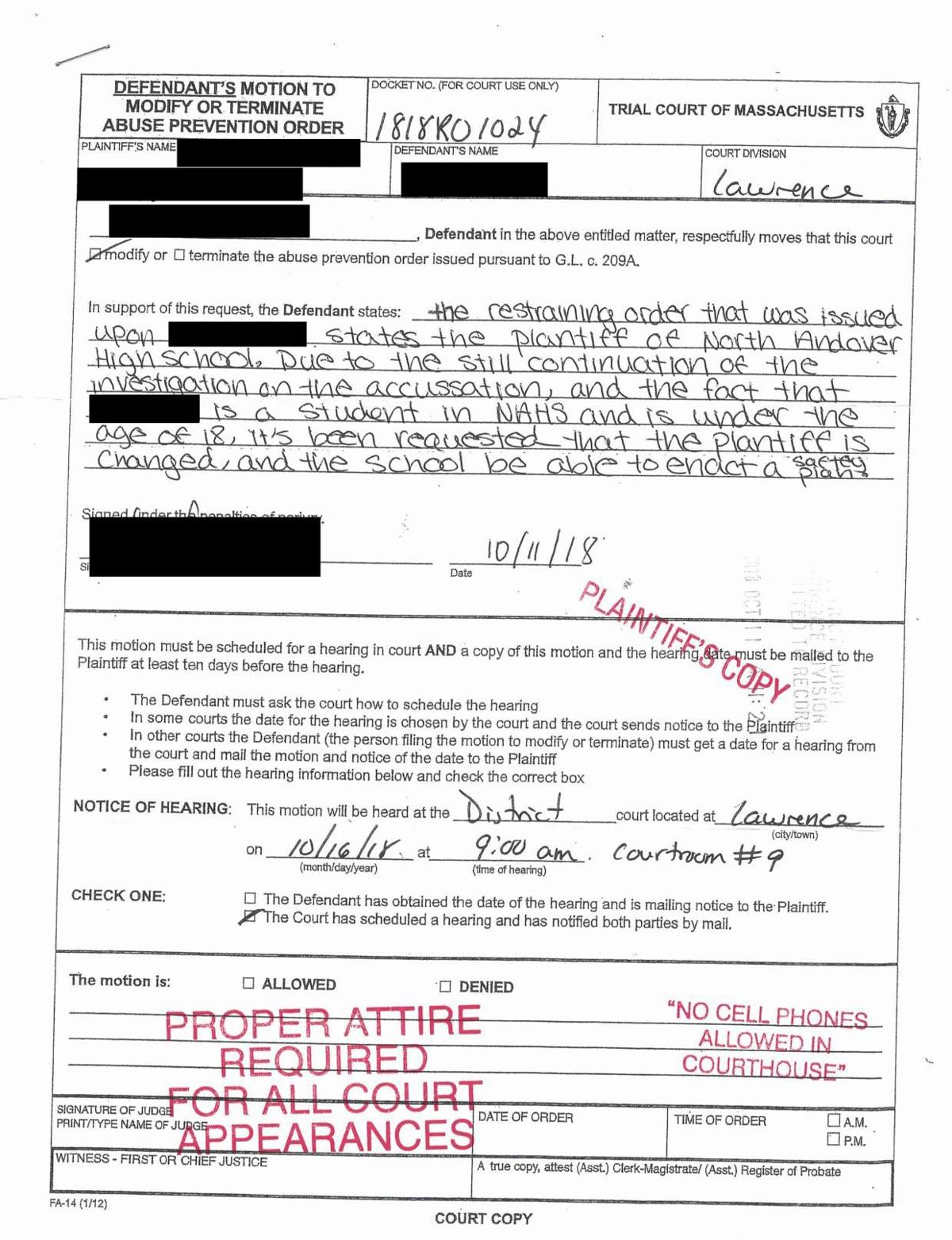 The newspaper has not been given a copy of the boy's agreement with school administrators.

The girl's plan notes that she must eat breakfast at the cafeteria, "then may find quiet space on first and third floors."

For the rest of the day, she's directed to "proceed directly to class." In one instance the contract indicates a staircase that she cannot use.

"Even if the judge knew that the School Safety Plan restrained a victim, the judge couldn't then require a victim to comply with it," Murphy, the attorney, said. "The school and the court do not have authority to restrain a victim. It's just not legal to restrain someone's freedoms solely because they requested protection."

She said that "when the court issued her that restraining order, they sided with her," Murphy said. "The school had no business coming to a different conclusion."