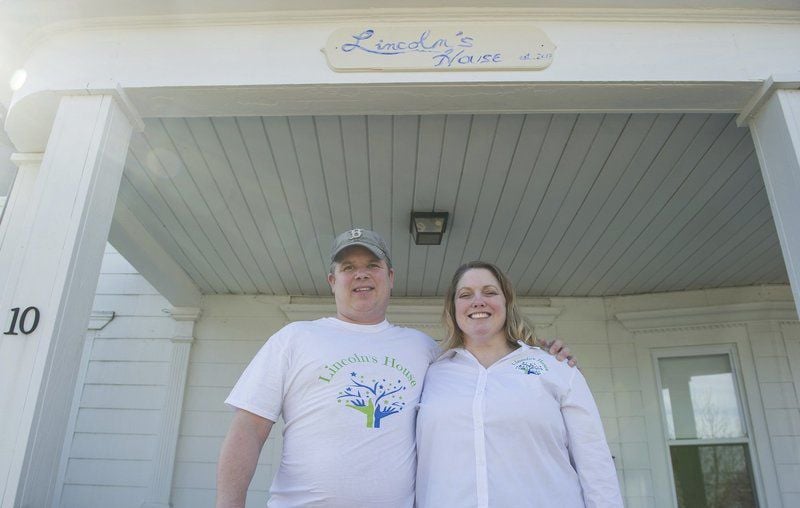 AMANDA SABGA/Staff photoJason Loomer and Danielle Donohue, founders of Lincoln's House, pose in front of the sober home at 10 Quincy St. in Methuen. 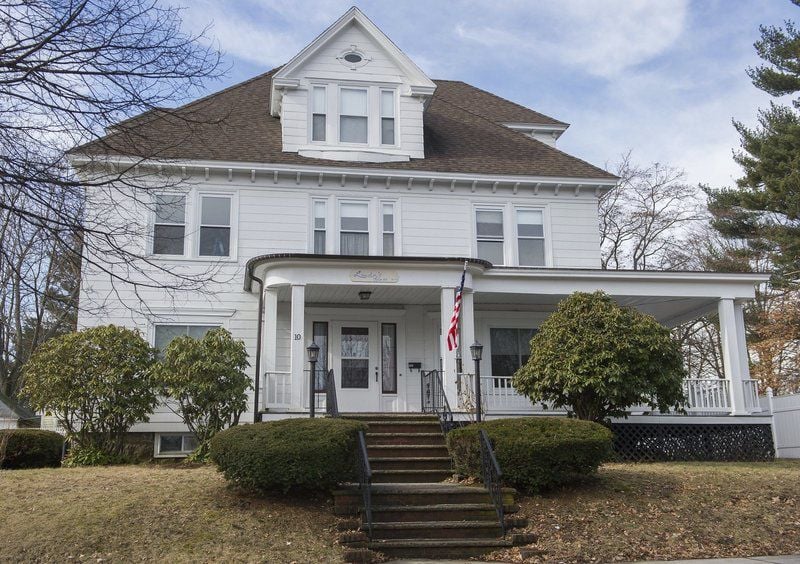 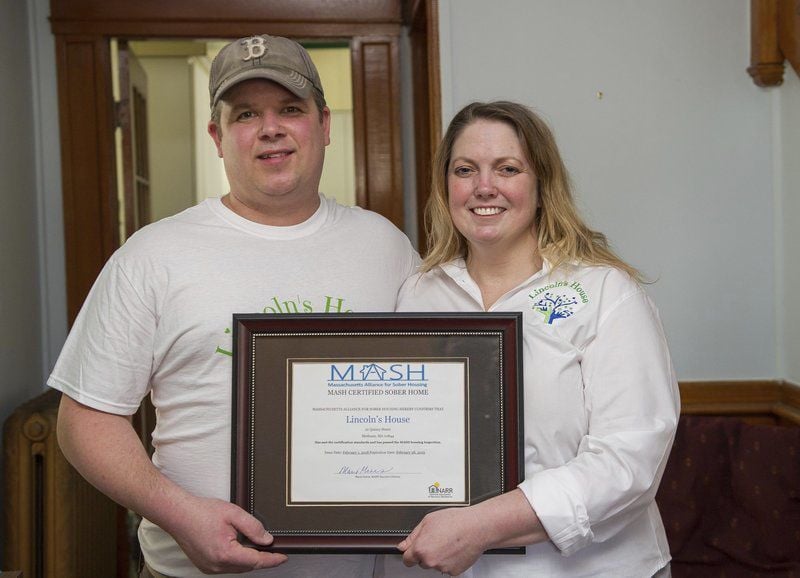 AMANDA SABGA/Staff photoJason Loomer and Danielle Donohue, founders of Lincoln's House, pose with their Massachusetts Alliance for Sober Housing certificate in the foyer of Lincoln's House at 10 Quincy St. in Methuen. 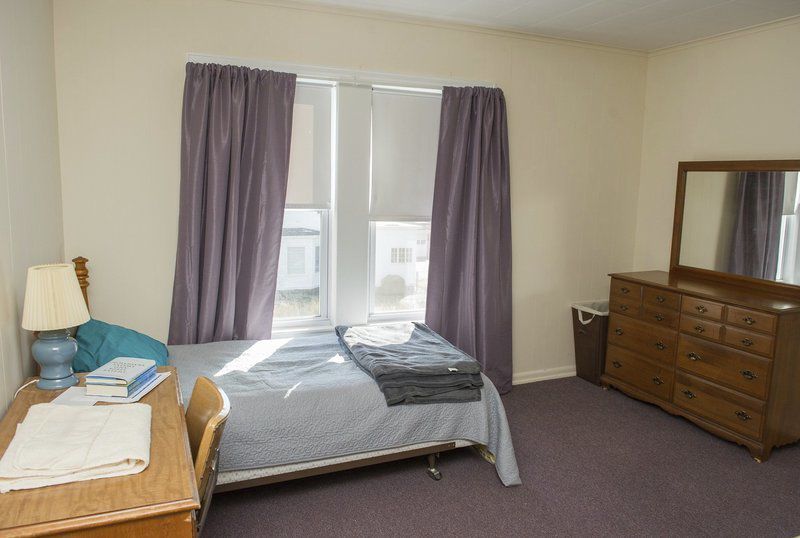 AMANDA SABGA/Staff photoBedrooms at Lincoln's House, a sober home that recently opened at 10 Quincy St. in Methuen, vary from singles to triples. 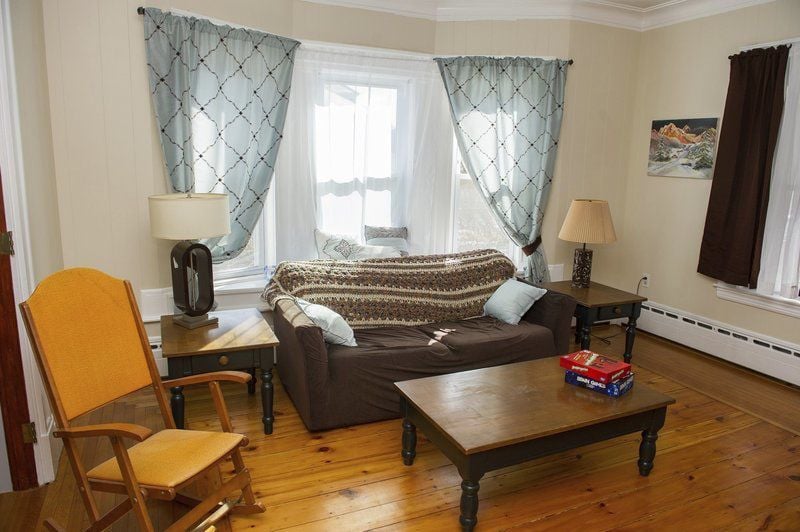 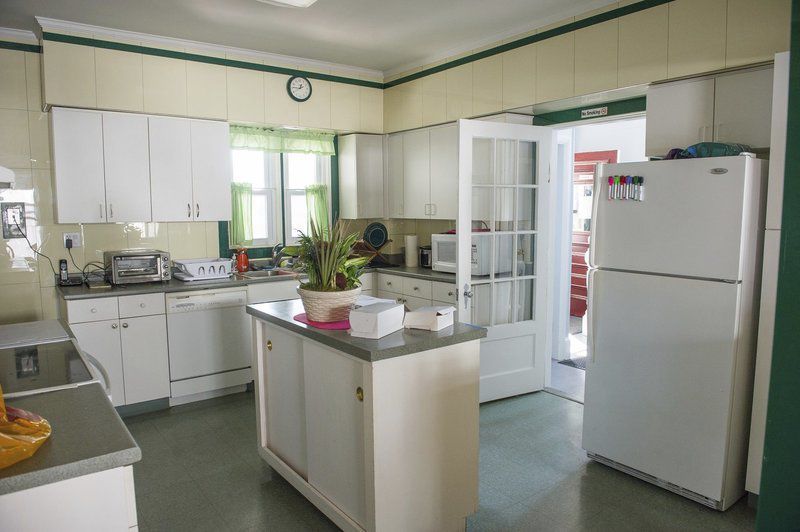 AMANDA SABGA/Staff photoThe kitchen at Lincoln's House, at 10 Quincy St. in Methuen, features two refrigerators as well as a multitude of storage for residents' food. 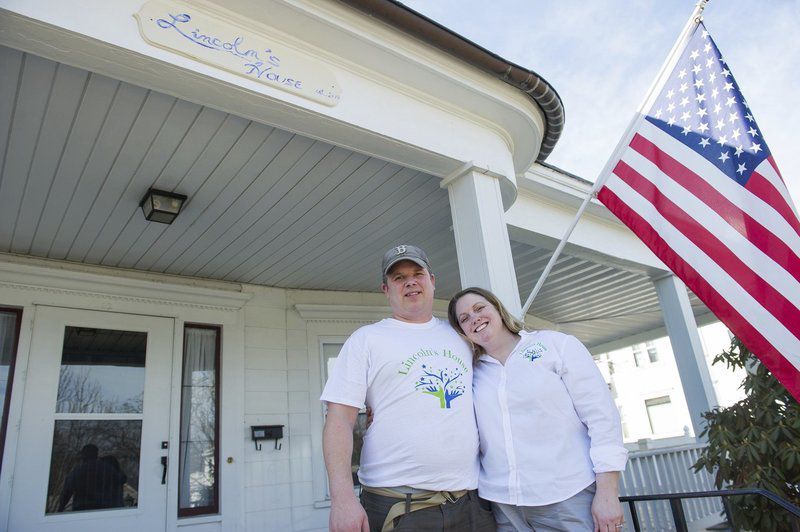 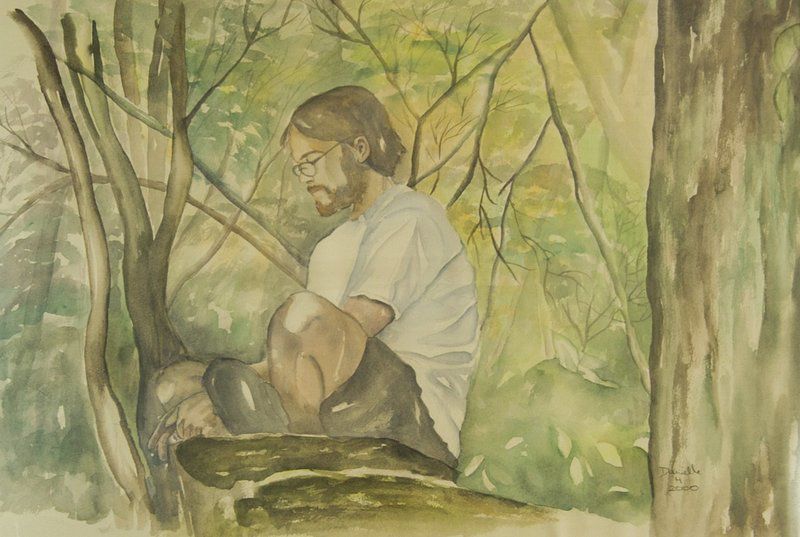 AMANDA SABGA/Staff photoArtwork by Lincoln's House founder Danielle Donohue, including this portrait of her brother, Lincoln, is displayed throughout the sober home at 10 Quincy St. in Methuen. 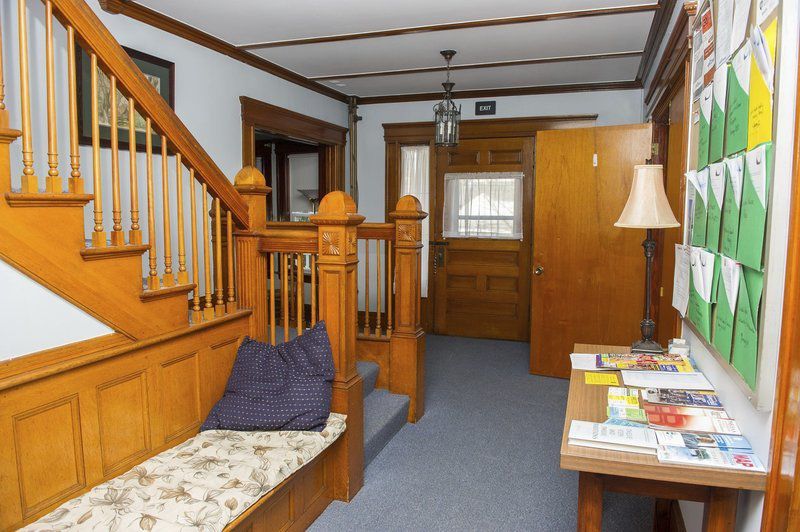 AMANDA SABGA/Staff photoJason Loomer and Danielle Donohue, founders of Lincoln's House, pose in front of the sober home at 10 Quincy St. in Methuen.

AMANDA SABGA/Staff photoJason Loomer and Danielle Donohue, founders of Lincoln's House, pose with their Massachusetts Alliance for Sober Housing certificate in the foyer of Lincoln's House at 10 Quincy St. in Methuen.

AMANDA SABGA/Staff photoBedrooms at Lincoln's House, a sober home that recently opened at 10 Quincy St. in Methuen, vary from singles to triples.

AMANDA SABGA/Staff photoThe kitchen at Lincoln's House, at 10 Quincy St. in Methuen, features two refrigerators as well as a multitude of storage for residents' food.

AMANDA SABGA/Staff photoArtwork by Lincoln's House founder Danielle Donohue, including this portrait of her brother, Lincoln, is displayed throughout the sober home at 10 Quincy St. in Methuen.

METHUEN — The city issued a cease and desist order Wednesday afternoon to the owner of a sober home that recently began operating at 10 Quincy St.

Methuen officials say they have been trying to gather information for weeks about the sober living home, which is called Lincoln's House and owned by Danielle Donohue. They claim the facility opened without city knowledge.

It is unclear how many residents are living in the sober home at this time. However, Donohue said a total of six residents have come through since the end of December.

With the cease and desist order, economic and development Director William Buckley said the city is ordering Lincoln's House "to kick out the people in the home and they need to cease operations operating as a sober home."

Donohue said, however, that “no resident will be on the street.” She did not offer further information about what would happen to the residents as of Wednesday evening.

Police Chief Joseph Solomon says that as a civil order, compliance with the cease and desist can be enforced if the city attorney goes to court to get an execution order. As of now, he said law enforcement is not involved.

Based on an inspection conducted Feb. 9, the cease and desist order says the home appears to be operating in violation of the city's zoning ordinance, as well as state building and sanitary codes such as noncompliance with proper egresses and fire and smoke protection features.

Delivered shortly before 3:30 p.m. Wednesday, the order tells Donohue to immediately cease operations until she provides detailed descriptions of the following:

* The proposed use of the building, for the city to determine whether it's exempt from zoning.

* A code analysis that shows compliance with building and sanitation codes.

* A proposed plan of action and schedule of completion for any work that needs to be done to bring the home into compliance.

* Completion of that work and the issuance of a certificate of occupancy.

Donohue has 24 hours to comply with the order. Failure to comply will result in fines of $300 per day.

After the Feb. 9 inspection, the city claims it was agreed upon that there would be no occupancy on the third floor of the home and that it would be restricted to five residents and one overnight staff person until further research was done on compliance requirements.

Donohue, who lives across the road, purchased 10 Quincy St. in October from the Congregation of the Presentation of Mary Inc. for $460,000. It was previously used as a home for nuns.

Opening a sober home is a deeply personal mission for Donohue and her fiance, Jason Loomer, the house manager. Donohue is in recovery from substance abuse issues, as is Loomer, who said he's six years sober and “would've been sober even longer if there had been a bed for me.”

Loomer and Donohue expressed frustration at the shortage of beds for people seeking to get clean, an issue that drove them to open their own sober-living facility.

“Everyone's just waiting for beds and they're just not there. People get lost in the shuffle,” Loomer said.

To operate the sober house, Donohue and Loomer went through training by the Massachusetts Alliance for Sober Housing (MASH), an association of sober homes and operators.

MASH sets certain standards for sober living facilities, is qualified to certify sober homes to its standards and has a contract with the Department of Public Health to do so, according to the state. However, because they do not offer treatment, sober homes in Massachusetts are not regulated and do not require licensing by the Department of Public Health. Their certification is voluntary, and is a fairly new process in Massachusetts.

A representative from MASH did not respond to Eagle-Tribune inquiries about the certification process as of press time.

As soon as Donohue bought the house in October, she and Loomer went to work readying it for occupancy, including ripping out the carpets and stripping the wallpaper, painting and buying furniture. Donohue said the first resident arrived at the end of December, shortly after Christmas.

In all, there are eight bedrooms and four-and-a-half bathrooms across the four-level house, which includes three residential floors and a basement. Bedrooms are on the second and third floors, while community and meeting rooms, a kitchen and a dining area take up the first floor. Another meeting room is in the basement.

Rooms have either one, two or three beds, and are equipped with a dresser for each occupant, as well as nightstands and desks. Rent is $225 per week for a single-bed room, $200 for a double and $175 for a triple, along with a $100 security deposit and $45 lock fee.

Each incoming resident also goes through an interview process “to see the level of sobriety and to see if they'd be a fit for our community,” Donohue said. Residents are often referred through courts, detox programs or come in off the street. They must have some level of sobriety, typically about 30 days, she added.

Residents are subject to three random, 12-panel urine-based drug tests a week, as well as breathalyzer testing. They must attend meetings as part of their recovery program – Donohue referenced the 12-step Alcoholics Anonymous recovery program as a guide – and secure a sponsor. They also must attend Sunday house meetings. And they are required to complete household chores, cook their own food and abide by curfews, Loomer said.

“We're basically here to make them ready to live on their own,” he said.

'It's a good group of guys'

Donohue said her neighbors shouldn't be afraid of the sober home and its residents, and encouraged her neighbors to stop by and see the house. Loomer said they would “never take anyone who would harm our community.”

“It's a good group of guys,” Donohue said of her residents. “These individuals (the neighbors are) slamming are in new recovery.”

Buckley, the city's economic and community development director, said the cease and desist order will help the city gather the information it needs to make informed decisions about the sober house's operations. That includes determining if Lincoln's House is exempt from city zoning under Massachusetts General Law Chapter 40a, Section 3, which deals with congregant living.

Donohue has contacted MASH and the National Alliance for Recovery Residences (NARR), as well as her attorney, to see how to proceed.

“It's sad because I really feel the whole thing is because they're mad because we didn't go to them first and their feathers are ruffled, if you will,” Donohue said. “I did go there (to City Hall), but I didn't know who to speak to... I just didn't do the right thing.”