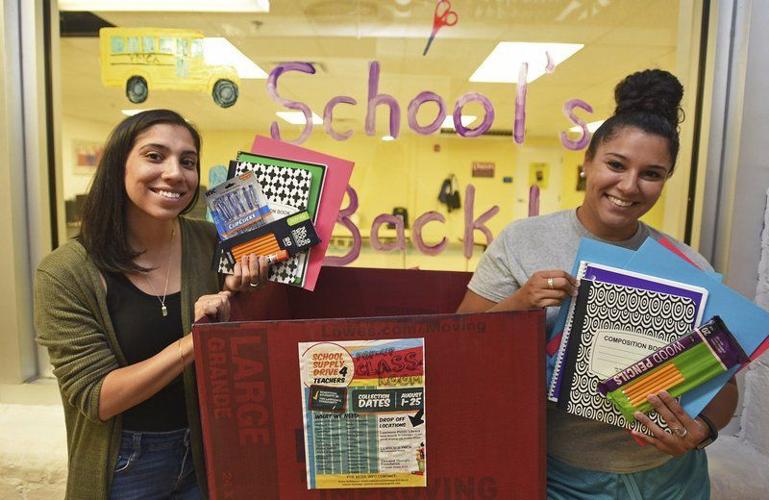 RYAN HUTTON/ Staff photo Keyla Rodriguez, left, and Janina Santiago, right, with just some of the school supplies they have collected so far for Lawrence teachers as part of the Pop-Up Classroom supply drive. 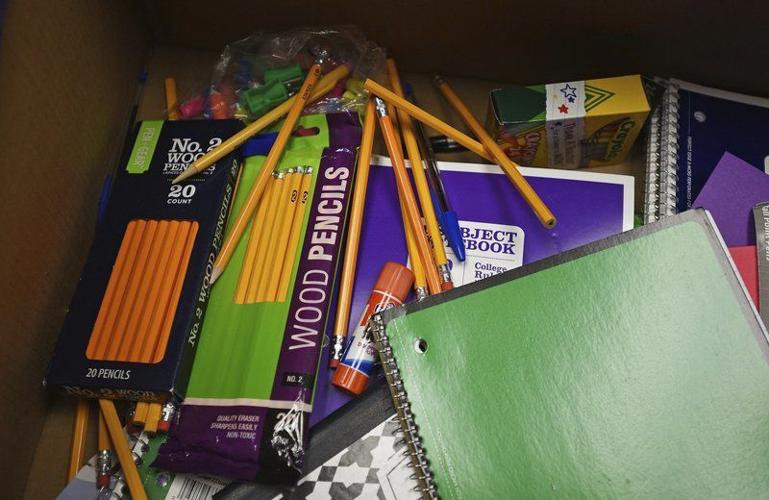 RYAN HUTTON/ Staff photo Some of the school supplies collected so far for Lawrence teachers as part of the Pop-Up Classroom supply drive.

RYAN HUTTON/ Staff photo Keyla Rodriguez, left, and Janina Santiago, right, with just some of the school supplies they have collected so far for Lawrence teachers as part of the Pop-Up Classroom supply drive.

RYAN HUTTON/ Staff photo Some of the school supplies collected so far for Lawrence teachers as part of the Pop-Up Classroom supply drive.

LAWRENCE — Two local women have been spending a lot of time this month readying for back-to-school, but not buying items for their family or themselves.

Keyla Rodriguez and Janine Santiago, both 26, have launched Pop-Up Classroom, which is an effort to raise money to buy and collect school supplies at locations around the city for use by teachers in Lawrence.

Throughout the month of August, Rodriguez, a paraprofessional at the Parthum Middle School, and Santiago, director of school-age programs at the downtown YMCA, are accepting donations. So far, they have exceeded their online fund-raising goal of $1,000, having collected $1,400. Their new goal is $2,000.

They placed bins around the city which have been filling up with binders, pencils, notebooks, erasers and more.

The pop-up shop will actually take place Sept. 5 and 6 at the Lawrence Public Library auditorium, when the well-meaning duo will put out all of the supplies they've either gathered or purchased. Teachers are invited to pick up the materials they need.

The idea, they both said, is to keep teachers from having to spend their own money on basic supplies that many of the students entering local schools either can't afford or simply don't have.

"It will be set up like a market," Rodriguez said. "Teachers can come in a get the stuff they need."

The list of items to purchase and collect was arrived at based upon input from teachers. Rodriguez and Santiago both have a lot of friends who teach here and elsewhere. They polled them to find out what they need at the beginning of every year.

"We are buying what the teachers want," Rodriguez said. "I double-checked with them."

Santiago said it's their way of giving back to the community where they were raised and went to school. Both graduated from Lawrence High School.

"With all of the things going on in the world, a small act of kindness can go a long way," Santiago said.

"Every September I stock my classroom with pens, pencils, erasers, pencil sharpeners, highlighters, notebooks and hand sanitizer," Nunez said. "By Thanksgiving, all of the supplies are depleted. I teach an average of about 115 students and sometimes pencils break, ink runs out, erasers are used up, notebooks get lost or destroyed in the rain and even filled up."

She said it's hard to buy enough supplies for the whole school year.

"I’ve had students write with sharpies, board markers, colored pencils, anything they could find to make it through class. I teach in a very big school and sometimes the office doesn’t have pencils, pens, or other supplies," she said.

"Any amount of classroom supplies would help my students immensely," she added. "It alleviates the burden of having to scramble for materials last minute and helps the kids run smoother transitions between tasks."

Rodriguez and Santiago noted that in many cases, teachers will spend up to $400 at the start of the school year for a half-year's supply of classroom necessities. The supplies usually run out by December, at which point they have to do another round of purchases.

Lawrence Public Library Director Jessica V. Vilas Novas, who has placed collection bins in both the Main Branch at 51 Lawrence St. and the South Branch at 135 Parker St., may want to expand the program and possibly make it year-round to be managed out of the library.

Rodriguez and Santiago said the need for supplies is great.

"You have parents working two or three jobs who can't help fill book bags in the morning," Rodriguez said. "Some kids come to school with empty book bags."

She noted that sometimes "parents can't afford to buy supplies or are just focused on survival."

"I see the necessity for basic materials and supplies," she said. "There are a multitude of reasons."

There are different ways to donate to Pop-Up Classroom:

* Via Cashapp: Search for $popupclassroom.

Bins have been set up at the following locations: