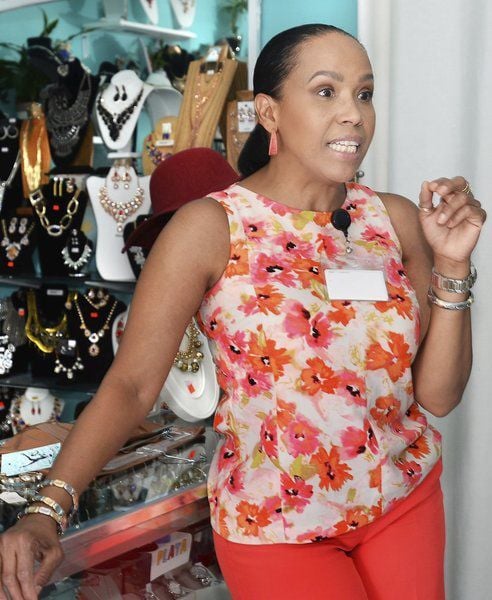 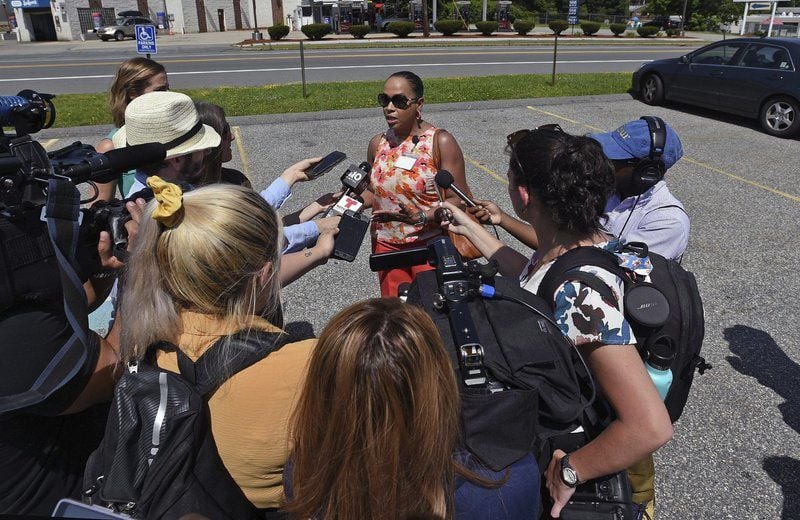 RYAN HUTTON/ Staff photo Maria Lopez, center, owner of the shop, Curiosity, in Lawrence, speaks to the press about how businesses like hers can truly be made whole after the Merrimack Valley gas disaster. 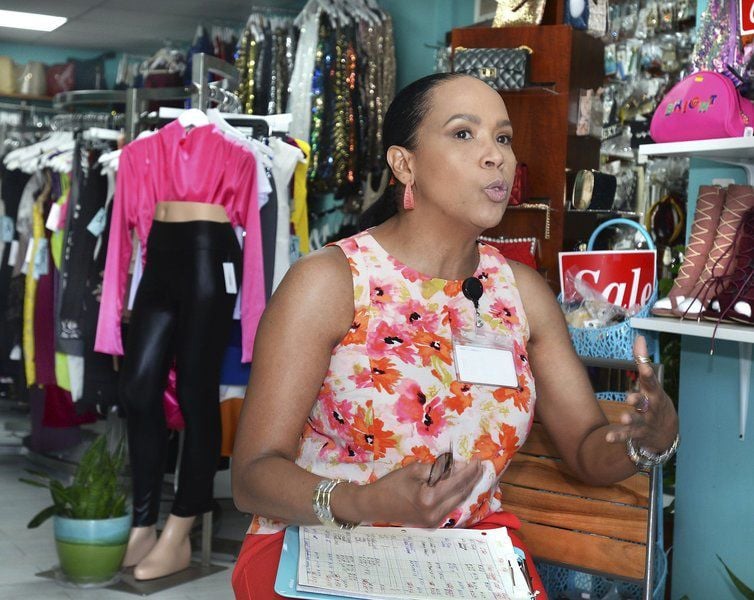 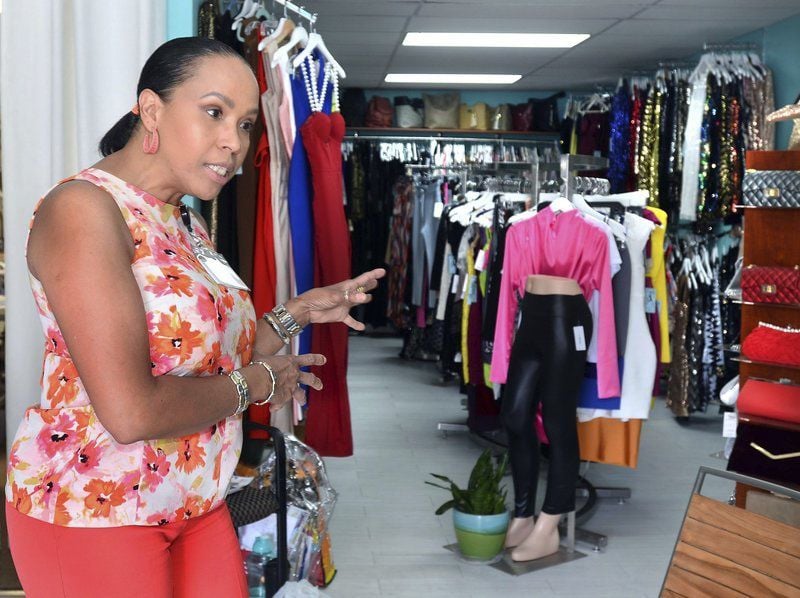 RYAN HUTTON/ Staff photo Maria Lopez, center, owner of the shop, Curiosity, in Lawrence, speaks to the press about how businesses like hers can truly be made whole after the Merrimack Valley gas disaster.

And what's on her mind these days? Her 134 South Broadway clothing and jewelry business, Curiosity, which has suffered badly since the Sept. 13, 2018, gas disaster.

Sales have dropped through the floor, she said. And making matters worse is that she's not getting the help she says she needs from the city, or the money she deserves from Columbia Gas.

Sitting in her colorful, cozy shop, which is filled to capacity with excess inventory, she held up ledger sheets showing sales figures over the last few months. The boxes are filled with zeroes, as she made zero dollars day after day, week after week.

In the month of December, leading up to Christmas, she made less than $1,000. During one recent, 14-day period, she didn't make any money at all. During another stretch of four days, she points out, she made $0  a day.

The cause, she said, is obviously the gas disaster, caused by overpressurized lines that set off explosions and fires all over Lawrence, North Andover and Andover last fall.

More specifically, she said, it's the fallout from the gas disaster that is proving most detrimental.

For weeks, roads in South Lawrence were closed or detoured as Columbia Gas crews scrambled to shore up the system to prevent more explosions and fires. The disaster damaged nearly 500 businesses in Lawrence alone and hundreds more homes and businesses across the Merrimack Valley.

As work crews bottled up streets, customers found other places to shop that weren't on South Broadway, she said. And they haven't come back.

Over the next four years, said Lawrence Mayor Daniel Rivera, that work will continue until the entire area affected by the explosions, including sidewalks, has been restored.

Lopez said she can't wait. And she wants Rivera to do something about it.

She said she wonders, specifically, what happened to the $2 million Columbia Gas gave to Lawrence in December as part of a disaster mitigation package for businesses. The same amount was given to Andover and North Andover. Both communities have spent some of the money.

"That money was supposed to be specifically spent on small businesses. Where is it? Lawrence hasn't spent a penny," she said. "It's been nine months since they (the city) got the money."

The money is being managed by the Lawrence Partnership, which is working with a board of directors on a plan to spend it, according to a Columbia Gas spokesman.

Rivera said that so far, however, none of the money has been spent because nobody has come up with an equitable way to distribute it.

He said it's been sort of a two-pronged problem.

On one hand, Columbia Gas hasn't reimbursed business owners for all of their losses. If a business lost $100,000 and can show it, he said, they should be reimbursed for $100,000. Instead, they are being reimbursed for less than that amount.

On the other hand, the distribution of the $2 million in business mitigation money has been fraught with problems.

In Andover and North Andover, only some of the money has been distributed through voucher or coupon programs. But both towns realized quickly, Rivera said, that they didn't have the infrastructure in place to operate an effective voucher program that equally helped all businesses affected by the disaster.

Rivera admits the problem is complicated, adding, "On the $2 million, I never wanted the money."

He said the money given to the communities was basically a way for Columbia Gas to look good without anyone having a plan on how it was to be spent.

"The real answer to the problem is compensating people for every penny the businesses lost or spent," he said. "If a business says they lost $30 grand, cut them a check for $30 grand."

He said the company is requiring so much documentation that the process has become too onerous for most business people to handle.

"The question of what to do with this money has been problematic because the need is much worse than the money we have," he said. "I'm not going to waste $2 million. If pay it out across all (490) businesses affected, it's only $4,000 per business."

Lopez countered that not all businesses need to be treated equally.

Huge chain stores like CVS or Dollar Tree don't need help since they are backed by giant corporations, she said.

Lopez said that so far, she, like other businesses, has gotten some money, but that it's not enough.

She was paid $511 to repair the front window after a Columbia Gas crew cracked it while cutting the padlock on the gate in front of the store so they could get in and turn off all the gas appliances.

She got another $3,000 to compensate her electrical costs because of the space heaters she used while her gas heat was shut off.

Finally, she got another $10,000 to pay rent and other utilities.

But her biggest loss, she said, is that she was unable to open or customers were unable to get to her store.

"The traffic was really bad," she said. "Nobody wanted to come to South Lawrence to shop and be stuck in traffic for 45 minutes."

She implored Mayor Rivera to "meet with us and help us."

If that doesn't work, she said she'll march on City Hall and demand to be heard.

"We are going to show up in City Hall and he'll have to answer to us when he sees all the people there," she said.

Rivera, surprisingly, agreed with most of what she said, but noted that her problem is with Columbia Gas, not the mayor's office.

"She wants to march on City Hall, well I'll join her," he said. "But let's go march to Columbia Gas. They can answer her questions."

Columbia Gas, in a statement to The Eagle-Tribune issued Tuesday, said the company has spent $36 million to help businesses in the Merrimack Valley.

"We understand that there are a small portion of business claims that are still outstanding or have a portion of their claim still open," said spokesman Scott Ferson. "We are working with business owners to try and address these. However, these claims are often unique, and, in many cases, there have been challenges with sufficient documentation needed to reimburse the claims."

He went on to say that the company is working with EparaTodos, or E-for-All, to help small businesses compile their claims. He said "we have directed adjusters to be flexible with business claimants with respect to the type of documentation needed to support a claim. In some cases, claimants have worked with forensic accountants to identify alternative documentation and sources of data that could support of resolution of a claim."

Finally, he added, "claims can be reopened at any time if the customer has additional information or documentation to provide and we encourage customers to contact their adjusters if they have additional detail on any claim that has been closed."