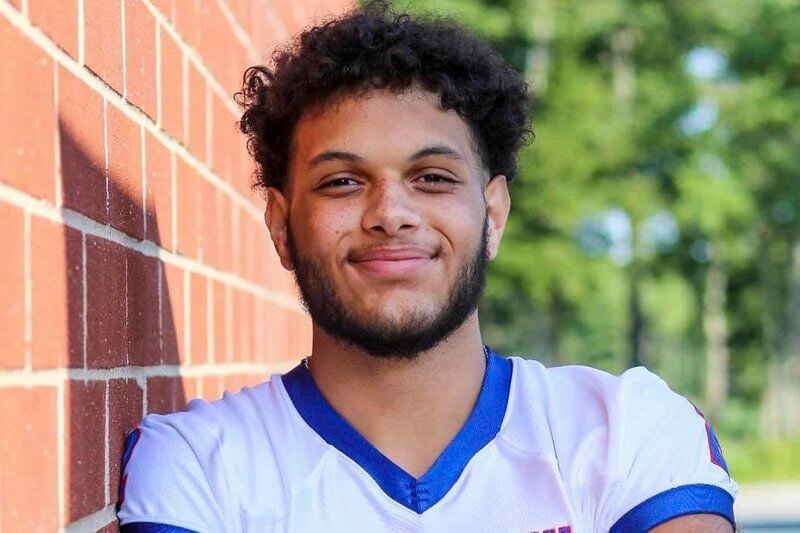 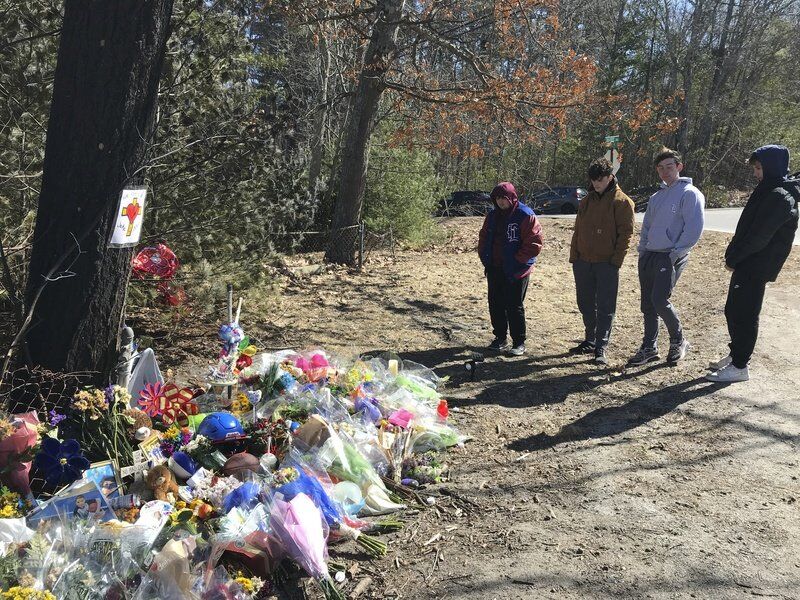 Julie Huss/Staff photosStudents gather at the site of the crash where Londonderry High senior Jacob Naar was killed last Friday night. The memorial is growing, full of flowers, photos, notes and tributes to Naar’s No. 2 football jersey.

Julie Huss/Staff photosStudents gather at the site of the crash where Londonderry High senior Jacob Naar was killed last Friday night. The memorial is growing, full of flowers, photos, notes and tributes to Naar’s No. 2 football jersey.

LONDONDERRY — The final few moments 17-year-old Jacob Naar spent with his parents in the family’s kitchen before walking out the door are personal, his dad said, but a far-reaching message was born there.

“Please, whether kids want it or not, give them that hug. The universe is indiscriminate in how it chooses,” said Reginald Naar. “Share that love, say it, express it.”

His only son, a Londonderry High senior and standout athlete, died in a car crash last Friday night. Jacob was alone in the vehicle and no others were involved, according to police.

The unexpected death of the football and lacrosse captain shook the community, drawing about 200 students to the high school cafeteria Saturday morning when school officials announced the availability of grief counselors.

A memorial at the site of the crash — near the intersection of Hardy and Hovey roads — appeared quickly with many stopping to pay respects. The growing display features flowers, photos, stuffed animals, a football and tributes to Naar's No. 2 football jersey.

“Friday night when this happened, the world caved in on my family,” Reginald Naar said. “We were being crushed.”

The overwhelming pressures of grief were only relieved by the outpouring of support online. Reginald said his family did not leave their home until Monday – only to go to a local funeral home – but were well aware of what was happening around them.

“People saying things you didn’t even know your son did, and how he impacted their children and how the community came out and showed my son so much love,” Jacob’s father said. “That helped hold up the ceiling.”

Many of the stories shared with Reginald, his wife and their three daughters are new to them.

“Small things, like a parent from Nashua North that we played this year. We lost to them. But she sent a message to my wife that my son came across the field and shook hands and said ‘great game.’”

That memory is in line with the type of man Reginald saw his son becoming: impactful, positive and genuine. He credits Jacob’s interactions in the Londonderry community as much as his upbringing.

“There’s a lot others have done to make Jacob who he was. This broader community was involved in that. I want to say thank you to them,” Reginald said. “That kid was loved here. He was loved outside of here. There were a lot of people caring for that child. A lot of people feel our pain.”

Londonderry High Principal Jason Parent said Naar was a popular, well-respected member of the class of 2021.

"He touched so many lives and he will be remembered for the kindness he showed to others, as well as his positivity in our high school," Parent said. "Jacob was the captain of our football and lacrosse teams, and a spirited leader in Lancer Nation. He will be greatly missed in the Londonderry community, and our thoughts and prayers are with the Naar family at this time."

"The best thing about Jake was the way he made people feel," Sullivan said "He simply made everyone's day better and if you needed a smile, you could count on Jake to give you one."

Lacrosse Coach Roger Sampson said Naar's memory will remain the heart and soul of the program.

"He was so well loved and so fun to be with," Sampson said. "He worked hard to be the best athlete he could be and played these sports with all his friends for years since they were little guys. The attachments to each other in this senior class are very strong and everyone is hurting as they come to grips with his passing."

Efforts are underway to establish a scholarship fund: The Naar Scholarship Foundation Lancer For Life.

This Thursday from 6 to 8 p.m. at Londonderry High yard signs and car decals will be sold to support the scholarship and monetary donations will also be accepted. Checks can be made out to LHS and sent to Londonderry High School, 295 Mammoth Road, Londonderry, 03053, Attn: Katie Sullivan.

A GoFund Me fundraiser called "Jacob Naar Scholarship Fund" quickly raised over $9,000 within five hours of being posted on Tuesday.

Reginald said he will work annually with the Londonderry High School football and lacrosse coaches to choose a hard-working student-athlete who is reminiscent of Jacob.

“I want it to be the kid that was average and excelled to be good, not great, not excellent, but pick a kid who you realize started slow and picked up speed,” he said. “Hopefully that scholarship will give them an opportunity to go forward, like Jacob would have.”

Reginald reflects now with pride. “My kid was a good soul.”