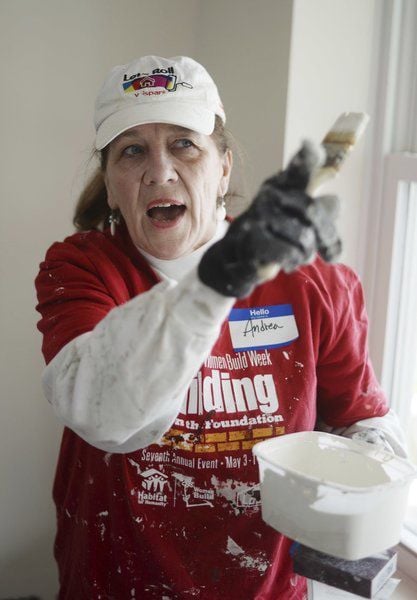 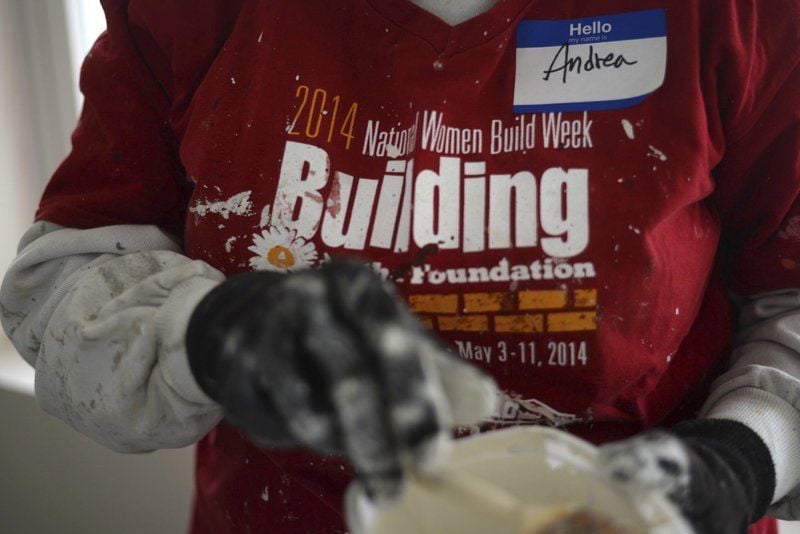 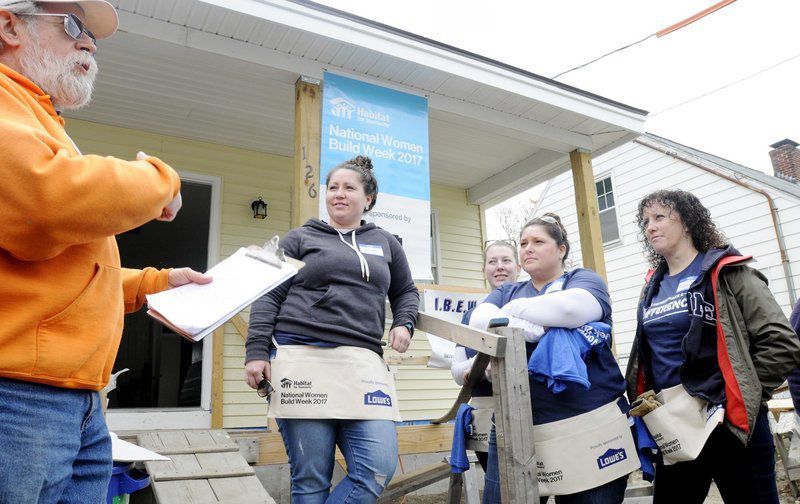 PAUL BILODEAU/Staff photoBuilding Director Emerson Dahmen talks with a group of women before they are sent out to different build sites for 10th Anniversary of Habitat for Humanity's National Women Build Week effort. 5/11/17 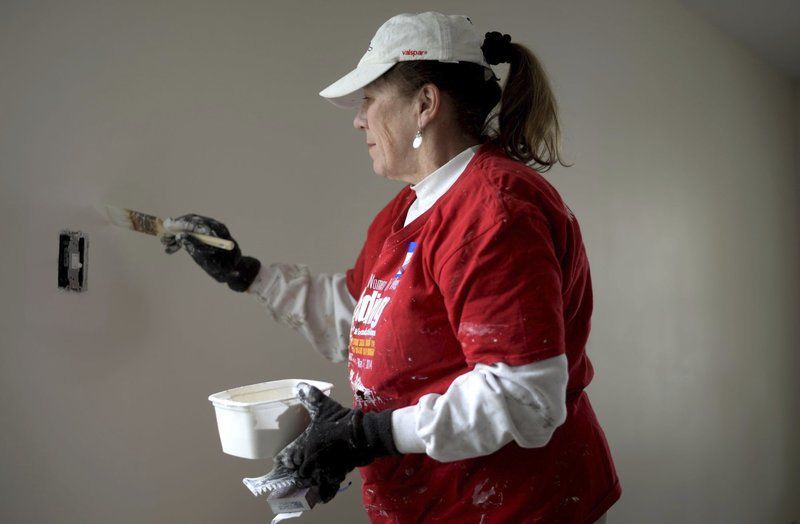 PAUL BILODEAU/Staff photoBuilding Director Emerson Dahmen talks with a group of women before they are sent out to different build sites for 10th Anniversary of Habitat for Humanity's National Women Build Week effort. 5/11/17

LAWRENCE — Andrea Vannett flitted around the right side of the duplex at 124-126 Phillips St. with a paintbrush in hand, adding strokes of paint to the walls near outlets with a few quick flicks of the wrist.

Her clothes – from the red T-shirt advertising Habitat for Humanity's 2014 National Women Build Week, to her dark gloves and off-white pants – were stained with flecks and smears of color. Far from marks of clumsiness, though, they instead served as the signs of a woman who's a seasoned professional at the task.

Vannett wasn't on a job Thursday, however. She was donating her time and expertise as a painter at the Merrimack Valley Habitat for Humanity's first veterans build, a cheery yellow duplex that's been under construction now for more than a year in Lawrence.

An arm of the larger Habitat for Humanity organization, veterans build provides housing throughout the country specifically for veterans. The Lawrence build will benefit veterans Joseph Maldonado, Isidoro Velazquez Jimenez and their families. The project has received an outpouring of support from the community in volunteer hours and financial donations.

This past week, two Habitat for Humanity initiatives came together as ongoing work on the veterans build coincided with the yearly National Women Build Week. That's what brought Vannett out Thursday morning for a few hours of work on the build site to mark her 10th year participating in Women Build Week.

“I can't financially donate a lot, but I can donate my time,” she said.

Vannett first heard about National Women Build Week – put on in partnership with home improvement company Lowe's – after seeing an advertisement for it in a newspaper about a decade ago. A house painter by trade who owns a local painting business that she took over from her father, Vannett wanted to contribute her professional touch to the volunteer-built homes.

The Lawrence native began volunteering with Merrimack Valley Habitat for Humanity and now tries to paint every Habitat house she can in Lawrence and the surrounding area. Each year she comes for the Women Build Week and regularly volunteers on Saturdays, as well as other times during the week if her schedule allows.

Working on the veterans build holds special meaning for Vannett. Her husband, like Velazquez, is a Vietnam War veteran.

She also knows the importance of home ownership and helping people achieve it. Vannett said she once was homeless, living in a shelter in Florida for about a month while escaping from an abusive former husband.

Being in a shelter was a “rude awakening,” she said. But the experience showed her that “affordable housing is very important to a lot of people, especially in Lawrence.”

Calling herself “blessed” to have a roof over her head, Vannett said she's glad to give back to those working to aspire to become homeowners themselves. The two veterans and their families who are the recipients of the Phillips Street build have been putting in “sweat equity” hours to help build their home, a down payment of sorts for their future abodes.

As the weather turns warmer, work continues to move along at the veterans build. The right side of the duplex is further along in the construction process, already insulated with dry wall in place and painting going on in the interior. Next up will be installing doors and cabinets, said Emerson Dahmen, building director for the Merrimack Valley Habitat affiliate.

On the left side, rough electrical work has been done, and finishing the rough plumbing is next on the list, he said. Then, work will mirror that on the right side, with the installation of insulation and drywall.

The duplex is expected to be completed sometime this summer, Dahmen said.

“It's going pretty well,” he said, adding that the build has seen support from veterans, corporate groups and church groups, and in-kind donations from local unions and tradespeople.

As Vannett continued to do paint touch-ups at the Phillips Street build on Thursday, Cathy Lachance was working across the city at another Habitat build, a new duplex at 11-17 Mason St.

Lachance is a project manager at WEI, an IT solutions provider based in Salem, New Hampshire. A group of WEI employees including Lachance and several other women spent the day volunteering with Merrimack Valley Habitat in honor of the Women Build Week. It's the second year the company has participated in the event through its Step Up program to give back to the community.

For Lachance, volunteering with Habitat is something she's "always been interested in doing, helping families get a new home."

Thursday was Lachance's first time volunteering on a Habitat build. But she appeared to handle a buzz saw with ease, cutting pieces of wood to be used as studs in the walls. It's not a task the single mom of two boys typically does at home in Hudson, New Hamsphire, but she relished in the opportunity to do tasks more traditionally thought of as a man's work.

“I've always wanted to learn to do this for myself, as a woman,” she said.

Lachance said it's always good to be self-sufficient, to be able to provide for her family on her own.

“As a single mom you learn to do a lot of this yourself and you're not counting on or finding another guy to help you,” she said.

Being able to come to Habitat with a group of women and being given a “real task” to show she could lift and handle large power tools the same as anyone else was inspiring.

“Seeing all the stuff I can do, it empowers me more,” she said.

She hoped others took note of the opportunity to see her in a different role. As a project manager, Lachance said she dresses up for her job, typically walking around in heels. Volunteering with Habitat allowed coworkers to see another side of her.

“You don't always see me getting dirty – but I can do it,” she said.