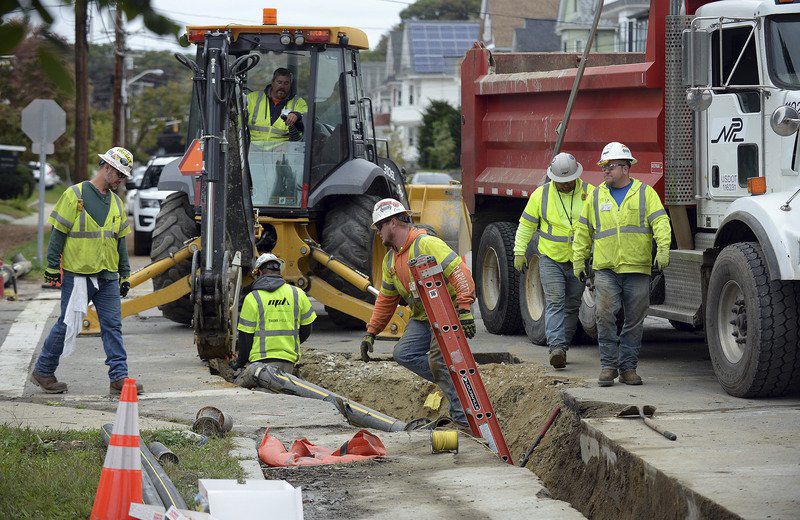 Technicians work in a freshly cut trench at the intersection of Osgood and Salem streets in Lawrence last October. Work to repave miles of roads following the Sept. 13, 2018, gas disaster is expected to go on for four years.

After every disaster, no matter the scale, come the questions: When have we recovered? When is the work done?

In the year since Sept. 13, 2018, when overpressurized Columbia Gas lines caused hundreds of fires and an explosion that killed a young man, much of the physical damage in Lawrence, North Andover and Andover has been repaired.

Police officer Ivan Soto’s burned-out home at 60 Jefferson St. in Lawrence has been rebuilt, taller, but painted nearly the same blue as the original.

Most of the irrevocably damaged houses have been torn down.

The demolished remains at 35 Chickering St., where 18-year-old Leonel Rondon died in the driveway, sat for nearly a year. But now that — toppled bricks, shredded siding and heaps of splintered furniture — has all been hauled away, too.

A total of 18,500 boilers, stoves and water heaters have been replaced.

Look at many of the once-charred buildings, and you can’t tell anything happened at all.

After two recreational areas served as a temporary trailer park for displaced people, the $2.8 million restoration of Lawrence's Sullivan Park and the South Common is all but done. Passing time is doing the last of the work on the baseball fields — they have to wait for grass to grow.

Preliminary school enrollment numbers in all three communities, often used as an indicator of how well recovery is going after a disaster, have shown relatively little change from last year, indicating few people had to permanently move.

“The community was really supportive of those who were impacted by the gas crisis,” said James Mealy, assistant superintendent for North Andover schools. “We’re hopeful that that minimized any chances of people having to leave because of it.”

The scars that remain — most of them at least — are harder to see.

But you can feel them.

When Columbia Gas came in to repair the damaged gas lines, they carved trenches into 65 miles of road in Lawrence, Andover and North Andover.

That “wa-womp” you sometimes feel through your tires? Those are the filled trenches — the scars — left behind.

Even the way the men and women charged with repairing the damage talk about this work sounds surgical. “Reconstruction,” they call it, same as the work you get done after an injury to make you whole again. And that work isn’t quick.

Officials in the three communities announced in May that they had settled with Columbia Gas for $80 million. That money covers municipal claims and expenses like Lawrence’s park restoration and Andover’s Senior Center renovations, but the largest chunk — $57.1 million — is for road restoration.

In the upper left corner of a whiteboard in Lawrence Mayor Daniel Rivera’s office, a guiding question is scrawled in block letters: “Can we do it today?”

Sixty-five miles of roads won’t be fixed today. Or tomorrow. The current plan for reconstruction in all three communities is expected to take 1,460 days — four years total.

The work has already begun, but that's a long time.

“It’s frustrating because the process is long, but it’s the right thing to do,” Rivera said.

Contractors won’t be simply scraping down the damaged surface — a process called milling — then repaving and calling it done.

Nothing that sits on earth is static, and roads, what we think of as being solid — at least until we hit a pothole — are no different. They shift, and move, and flex by millimeters.

New Englanders know better than most that roads slowly expand just a tiny bit with a freeze, then get compacted down. Some of that compaction, and the time it takes, is necessary as road reconstruction goes forward.

“Bottom line, whenever you do trench work, you’re always going to have settlement,” said Jim Stanford, director of the Department of Public Works for the town of North Andover. “You like to have your trenches settle over the winter.”

But roads with seams, like those created by filled trenches, can also be damaged by time, winter weather and get wrenched by snow plows. With a four-year timeline, some of those trenches will be expanding and contracting for a while.

Until the three communities complete their work on road restoration, responsibility for maintaining the filled trenches stays with Columbia Gas.

“I have to admit that the trenches have held up pretty well,” Stanford said. “We had the gas company come back and do a number of trenches over again.”

Each community is dividing its miles of road work — approximately 19 in Andover, 15 in North Andover, and a whopping 31 in Lawrence — into phases.

North Andover is reconfiguring some sidewalks to create better access for people with disabilities and to make the city more walkable.

"The thought process is if we're going to go ahead and proceed with pulling back the roads, we are going to do all the water work that needs to be done," Flanagan said.

Lawrence has similar plans, though the city had water and sewer work in progress at the time of the gas disaster, including some sites where roads were repaved just before the crisis. Now they'll have to be repaved again. The rest of that work now will happen in tandem with road reconstruction.

“We were going to fix these streets eventually, but I didn’t want to do it this way.” Rivera said. “I’m frustrated that we're going through this because a company was sloppy and irresponsible in the way they did their work. So now we have to go through this thing. I have the unsatisfactory job of having to do this the right way even though I know it’s the most frustrating way.”

Lawrence’s Phase 1 of road work started in early September, focusing on the streets that have few complications and simply need to be repaved. That phase is slated to be finished by the end of October.

“Because of the long timeline we didn’t want to lose one construction season, so we’re sneaking it in at the end,” said Rivera.

North Andover plans to work on roads near Route 125 — including Pleasant and Osgood streets — this fall.

In Andover, School Street from Main Street to Essex Street is on deck this year, among a few others. And streets in the neighborhood between Balmoral Street and Burnham Road are being paved now, or about to be.

Stanford has been in civil engineering for 28 years and said the scale of the job is “unprecedented, from a public works perspective.” So, he said, it has required those in charge of fixing the problem to learn on the fly.

“We lean heavy on the subject matter experts,” Rivera said. “We make them tell us in common English what the hell they're talking about, and then we hold their feet to the fire. That’s the only way to subside my fear of doing it wrong, is to make them explain it to me like I’m a 3-year-old and then holding them to that language.”

But the question on most people’s minds, if they live on one of those 65 miles of road: When is mine getting fixed?

Officials in all three communities noted that keeping residents apprised of when their roads will be worked on is paramount, but that individual streets likely won’t be listed on a calendar years out.

“We don’t want to set up a false expectation,” Flanagan said. “Weather conditions are going to have some impact on the schedule.”

Talk to the leaders of these cities on any given day and they won’t be far removed from a conversation with a citizen, concerned at best, boiling mad at worst, about gas disaster recovery and the state of their roads.

A complaint makes its way to Stanford who then sends one of his guys out to survey the situation and determine if a trench needs to be refilled by Columbia Gas. Rivera says he hears from justifiably frustrated citizens often.

“Being on a street that needs to be fixed is helpful. I sympathize with the frustration,” he said. “They’re not mad at Dan Rivera, they’re mad at the mayor and they want somebody to do more for them, and I don’t ever take that personally. I don’t ever get frustrated with that, because it’s the exact right emotion.”

A year later, after explosions and fire and fear, though much of the recovery is complete, the literal road to being finished is still long.

Stanford summed it up: “We’re hoping for very good weather over the next three years.”

Reporters Jessica Valeriani and Bill Kirk contributed to this story.

Alexandra Nicolas is an award-winning writer, multimedia producer and editor. She has been awarded fellowships from the Knight Digital Media Center, Investigative Reporters & Editors and The Institute for Journalism and Natural Resources.