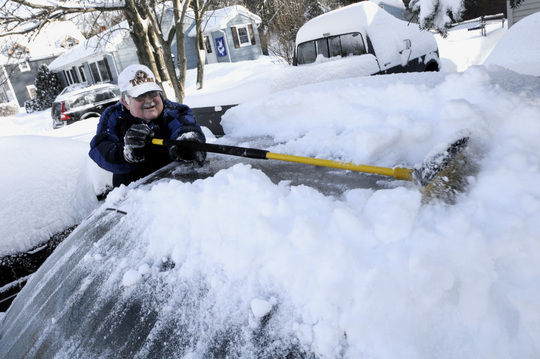 Dave Pyles, originally from Texas, clears snow off his wife's car on Ruth Street in Salem after the latest snowstorm. 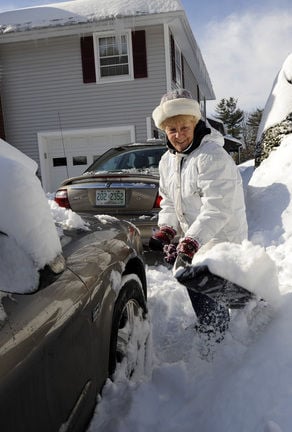 Doris Thibodeau, 81, of Salem digs out her daughter&rsquo;s car on Cole Street in Salem after the latest snowstorm. 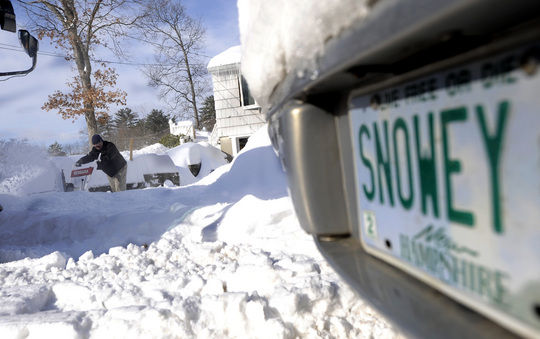 Jean Yves Lavoie of Salem clears his driveway with a snowblower yesterday morning. The license plate on a family vehicle says it all.

Dave Pyles, originally from Texas, clears snow off his wife's car on Ruth Street in Salem after the latest snowstorm.

Doris Thibodeau, 81, of Salem digs out her daughter&rsquo;s car on Cole Street in Salem after the latest snowstorm.

Jean Yves Lavoie of Salem clears his driveway with a snowblower yesterday morning. The license plate on a family vehicle says it all.

The sun was shining and the roads were clear yesterday morning — with almost no sign of the storm that pummeled Southern New Hampshire with more than a half-foot of snow only hours earlier.

The slippery roads that made travel difficult for some Wednesday night and early yesterday were no longer a problem as of 7 a.m. The snow had stopped, providing relief for many commuters on Interstate 93 and other local roads.

Although flashing signs indicated the speed limit on I-93 was reduced to 45 mph because of the storm, there were no major problems despite the heavy snowfall, according to Sgt. Lawrence Bolduc of the New Hampshire State Police.

"We had very few accidents," Bolduc said. "DOT did a very good job cleaning the roads this morning."

Bolduc said only two accidents were reported on the 19-mile stretch of I-93 that runs from Salem to Manchester.

"We had a number of extra patrols out there, but we really didn't have much this morning, which is nice," he said.

Yesterday's storm came only two days after a light snowfall wreaked havoc on local roads, causing more than three dozen vehicles to slide off the road or crash on I-93, Route 101 and Interstate 293. There were no serious injuries. It also was just one of several snowstorms in the last month to hit during the morning commute, causing dangerous travel conditions for those heading to work.

Timing was everything for this storm. The bulk of the snow fell when few drivers were on the road, giving plow crews time to clean up before the morning commute.

Schools were closed in most local communities, including Derry, making it easier for plow operators since fewer drivers were on the road, Thomas said.

"It allows the plows to do their job," he said. "They did a nice job plowing and cleaning up."

While there were no major accidents in Derry, four or five cars did go off the road early yesterday morning before the storm ended, Thomas said.

But even after the last snowflakes had fallen, many local residents found themselves trying to remove snow from their driveways, including 81-year-old Doris Thibodeau of Salem.

Thibodeau smiled as she dug out her daughter Lisa's car. Although many people say they are sick of winter, Thibodeau isn't one of them.

Thibodeau said she especially enjoyed the opportunity to get fresh air on a bright, sunny day.

"I think it's lovely," she said of the snow. "It was so beautiful," estimating about a foot fell in her Cole Street driveway. "We live in New Hampshire, so what do you expect?"

But another Salem resident, Kellie Lavoie of Ruth Street, has had enough of winter's fury.

Yesterday morning, she watched as her father-in-law, Jean Yves Lavoie, cleared the family's driveway with a snowblower.

Although their license plate says "SNOWEY," it's not because she loves winter.

Snowey happened to be the name of her American Eskimo dog. Although her beloved pet died 10 years ago, the license plate is one way to make sure Snowey is not forgotten, she said.

For Paul Wright of Londonderry, who also was out with his snowblower, this winter hasn't been too difficult to deal with.

"I'm from northern Maine, so this isn't much snow," he said.

Those who think New Hampshire must be close to setting a record for snowfall this winter are wrong, according to Bob Marine, a meteorologist for the National Weather Service in Gray, Maine.

"I don't see us approaching any kind of records," he said. "We're only 9 inches above normal."

Based on snow totals recorded in Concord, 43.2 inches of snow had fallen as of yesterday, only 5 inches more than this time last year.

The average for this date is 34.1 inches, with about 71 inches of snow falling during a typical winter, he said.

Most of Rockingham County received about 4 to 7 inches in the latest storm, Marine said.

He said the next several days will not bring any storms, though there might be light snow showers over the weekend.

Temperatures today, Saturday and Sunday will be in the high 20s to low 30s and in the single digits at night, Marine said.