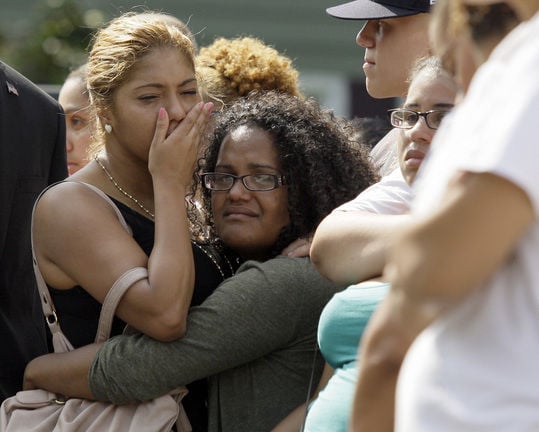 Carmen Rivera, the sister of Milka Rivera, center, is consoled by a family member at the crime scene of yesterday's triple homicide. 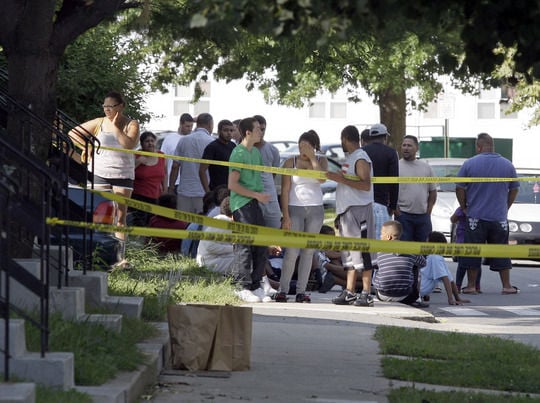 People gather at the crime scene of a triple murder at 15 Maginnis Ave in Lawrence. 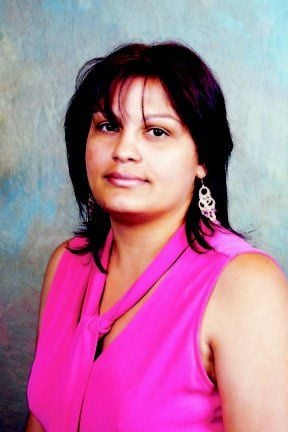 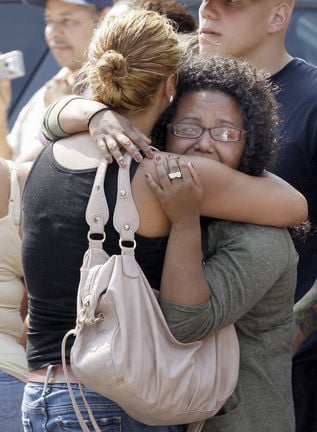 Carmen Rivera, the sister of Milka Rivera, is consoled by a family member at the crime scene of a triple murder at 15 Maginnis Ave in Lawrence. 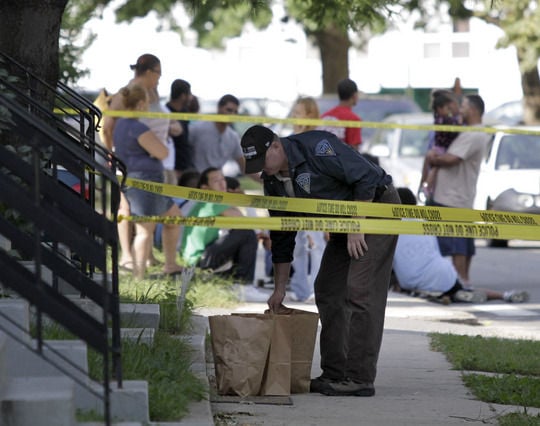 A State Trooper sets down some paper bags as people gather behind the yellow tape at the crime scene of a triple murder at 15 Maginnis Ave in Lawrence.

Carmen Rivera, the sister of Milka Rivera, center, is consoled by a family member at the crime scene of yesterday's triple homicide.

People gather at the crime scene of a triple murder at 15 Maginnis Ave in Lawrence.

Carmen Rivera, the sister of Milka Rivera, is consoled by a family member at the crime scene of a triple murder at 15 Maginnis Ave in Lawrence.

A State Trooper sets down some paper bags as people gather behind the yellow tape at the crime scene of a triple murder at 15 Maginnis Ave in Lawrence.

LAWRENCE — Milka Rivera was a doting mother with a "bright smile" her co-workers loved. Her daughter Sachary Montanez had just started her freshman year in college studying business, and her son Max Ariel was a standout sophomore on his high school football team.

While police said there was no reported history of domestic abuse at the 15 Maginnis Ave. home they shared in South Lawrence, neighbors, family and friends said Tejeda was kind to others, but violent with Rivera.

Tejeda reportedly walked out of the Beacon Court townhouse at 2 a.m., approached a stranger, and indicated something bad had happened inside, police said. The stranger alerted police who arrived, broke in, and found the bodies of Rivera and her two teenage children. A gun was discovered outside.

Police Chief John Romero would not say how long the family may have been dead before officers arrived on scene. The chief said police received no reports of gunshots in the area prior to finding the bodies.

Romero said Tejeda was found across the street shortly after the 911 call, in another apartment complex. He would not say if Tejeda confessed to the killings.

"It's the ugly spectre of domestic violence showing its head," Blodgett said.

There were at least 200 people standing around the apartment as the bodies of Rivera, Sachary, 19, and Max Ariel, 16, were taken from the home.

Ramilka Santiago cried out "Oh my God! No!" "It can't be!" and "Ay Titi!" Spanish for "my auntie." Santiago is the daughter of Carmen Rivera, Milka's sister, and one of the dozens of family members who gathered.

Also there was the childrens' father, Maximino Montanez Jr. He stood against the wall of one of the townhouses, watching from a distance.

"I'm in shock, in pain, devastated and wondering, 'God, why do these things have to happen?'" he said.

The childrens' grandfather, also named Maximino, was at his son's side.

"This is very hard for me," the grandfather said. "I'm asking God to console me. They were really good kids and loved by every one."

With his eyes red from crying, Maximino Montanez Jr. smiled as he talked about his children.

"She was studying to become somebody and he loved his sports," Maximino Montanez Jr. said "I am so proud of both. To me, they are not dead because they will forever live in my heart."

Last night, friends of Max Ariel and Sachary held a vigil in front of their home. They lit candles and placed sunflowers, along with notes. Among those attending were members of the Boys and Girls Club of Lawrence which has a satellite office on nearby Duckett Avenue.

Sachary's best friend Anishka Arivas was also there. She described Sachary as a smart young woman who had big plans for her future. She was studying business at Hesser College.

"She was a really happy person and liked to have fun," Arivas said.

Arivas, a senior in the Health and Human Services High School on the Lawrence High campus, said she didn't think anything was wrong when Sachary did not text her back at 11 p.m. last night.

Five hours later she found out her best friend was dead.

"I didn't believe it. I thought they were kidding."

Luis Santiago was a cousin of Sachary and Max Ariel. He got a call at 4 a.m. and said "I started shaking and crying."

"He was one of my closest cousins," Luis Santiago said. "I took care of him when he was baby."

Santiago and other cousins including Cano Figueroa, 17, were playing pool with Max Ariel yesterday. They then headed out to the Feast of the Three Saints downtown, where they ate steak and cheese sandwiches.

"He was a funny kid who also had a serious side," Figueroa said. "He respected his mother and did everything she said."

Max Ariel just celebrated a birthday on Aug. 24. In a Facebook message to him, his mother wrote: "Sixteen years ago, my lovely Max Ariel was born and today he is a man. God bless you my son. Happy birthday and may this new year be filled with eternal happiness and much success."

Max Ariel was to start his sophomore year at Greater Lawrence Technical School in Andover this morning, where he studied in the auto body shop. At 5 feet, 11 inches tall and weighing 280 pounds, Max Ariel was described as a standout lineman and had already started football practice with the team.

"He was a gentle giant who was fun to be around," football coach Ted Sarkis said. "He was a great kid who was always smiling and had a great sense of humor."

Family members said Max Ariel repeated his freshmen year, but was taking more interest in his academics, thanks in part to being on the football team.

"He was a student that when he came to the school, had some struggles, but he was able to overcome those and became a good student," Lavoie said.

Lavoie said administrators and staff members met yesterday to come up with a plan to help students and teachers deal with the tragedy.

"It makes it a very difficult moment for them," Lavoie said.

He said grief counselors and members of the Trauma Intervention Program will be at the school early to meet students as they get off the buses at 7:10 a.m. School starts at 7:40 a.m. Members of the football team will spend time as a whole with counselors in the gym.

"They don't always understand death, difficulties they face in their lives or why it happens," Lavoie said. "For myself, it's always sad when I see a young person who is starting to turn his life around, be successful and taken away from us. The important thing is the students have everything they need to help them."

Milka Rivera was well-known through her work at the Greater Lawrence Family Health Clinic. A co-worker said she was always smiling and loved to laugh. When she laughed, so did everyone else in the room, the co-worker said.

The agency's spokesman Marc LeMay also said Rivera had a "bright smile." He said grief counselors will be available at the agency today to help co-workers "deal with the emotional nature of the news we have received over the weekend."

"GLFHC has lost a valued member of our family. Milka was well-liked by both staff and patients and was always there to lend a helping hand to anyone," Lemay said in the agency's statement. "She was a model staff person and a great friend to many, both in and out of the Health Center. Our thoughts are with her family and friends at this tragic time."

Wendy Luzon, founder of De la Mano, a helpline for battered women, said she knew Rivera, but doesn't know if she ever sought help for any domestic abuse.

"If it's difficult for a regular woman to call, it's even greater for a woman like her who worked at an agency which renders services for others," Luzon said.

Vilma Lora, co-director of Women's Services at the YWCA of Greater Lawrence, said emergency services for battered women are "extremely limited" in the Merrimack Valley. But both women said they hope women who may be in abusive relationships realize help is out there.

"This is a tragedy that puts the entire community in mourning," Luzon said.

Blodgett said last year was the deadliest in state's history for domestic violence.

"It's a terrible phenomenon we're experiencing in Massachusetts," Blodgett said.

Rivera never took out a restraining order and Tejeda had no criminal record before yesterday, Romero said. This morning, Tejeda will be in Lawrence District Court, facing three murder charges.

Where to go for help if dealing with issues of domestic violence: