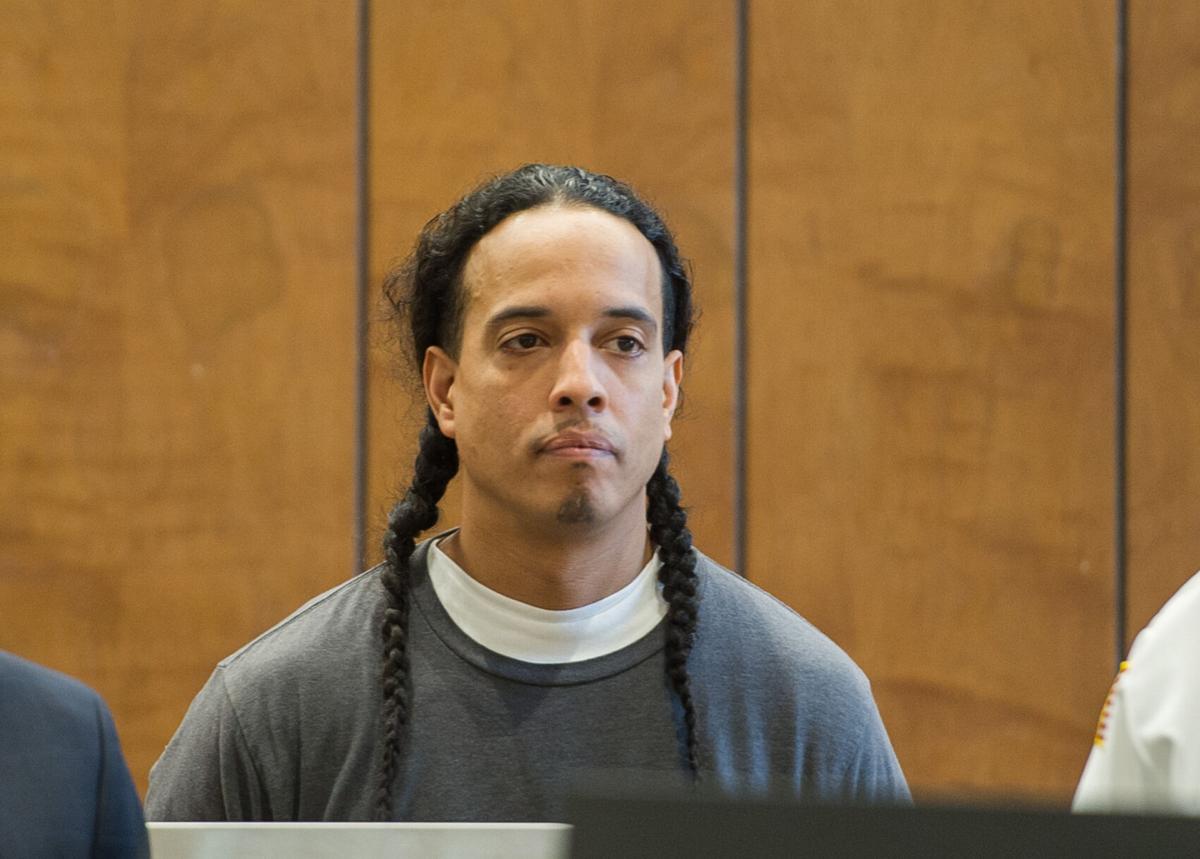 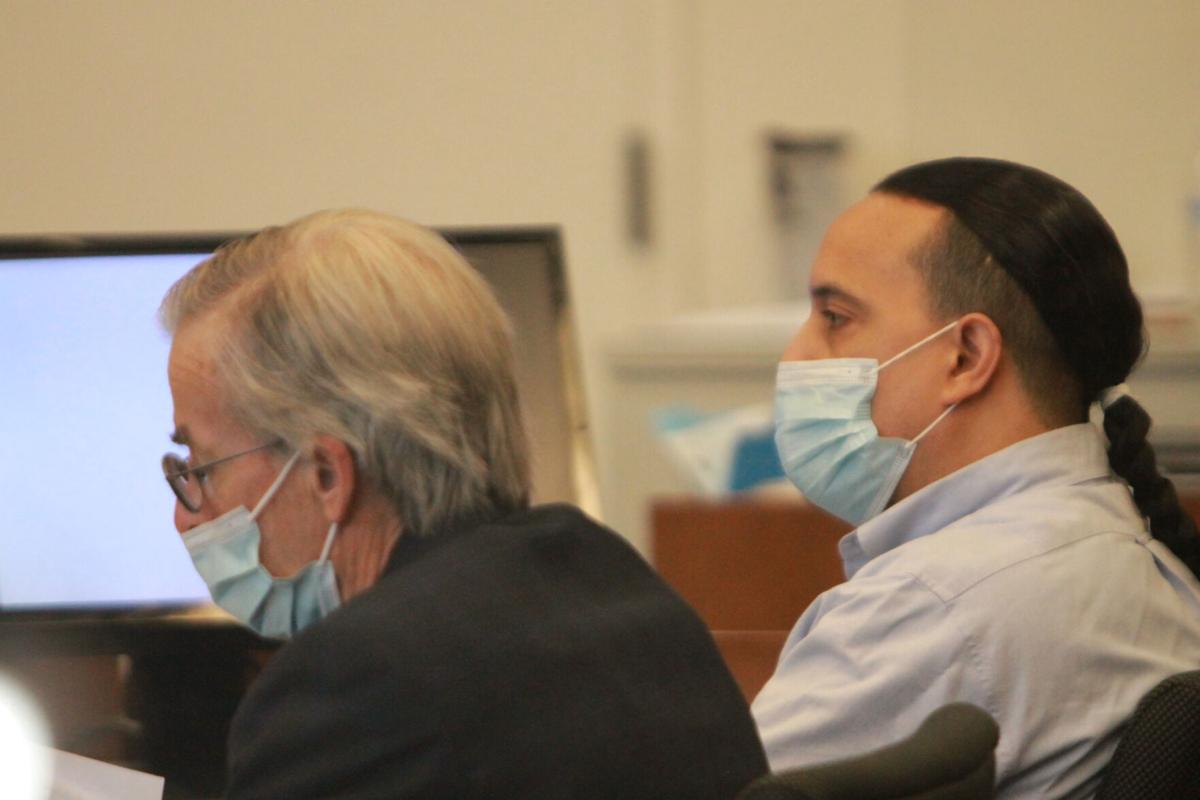 Carlos Manuel “Chin” Rivera at his trial in Salem Superior Court on Wednesday. At left is his defense lawyer, Edward Hayden.

Carlos Manuel “Chin” Rivera at his trial in Salem Superior Court on Wednesday. At left is his defense lawyer, Edward Hayden.

During her opening statement, Essex Assistant District Attorney Susan Dolhun said most of the people involved in the case were chronically addicted to drugs, including Sky Stefanelli, who Dolhun said is the only eyewitness to the murder.

“In the end it was drugs that brought all these people together, Dolhun said. “But for the drugs, there would be no case.”

Police said that on May 6, 2018, around 10:45 p.m., they were dispatched to Grand Avenue near Emerson Street in Haverhill.

When officers arrived, they found Larkin on the ground on the south side of the street with a bullet wound in the left side of his chest. Police said Larkin was transported to Holy Family Hospital in Haverhill, where he was pronounced dead.

Rivera, who police said goes by the nickname “Chin,” was subsequently indicted by a grand jury for murder in the first degree, possession of a loaded firearm and carrying a firearm without a license.

Dolhun said that through a cooperation agreement with the government that requires her to testify, Stefanelli’s indictment for being an accessory after the fact will be dismissed, regardless of the outcome of the case.

Dolhun said that on the day of Larkin’s murder, Stefanelli had contacted her mother, Carly Carney, to purchase cocaine from Larkin for her and Rivera.

Larkin subsequently sold Stefanelli two $40 bags of crack cocaine, Dolhun said, but Stefanelli learned that she had overpaid by $10 and wanted the money back.

“She was homeless and couch surfing and she was broke, so $10 meant a lot to her,” Dolhun said, noting the $10 became the source of an argument between Stefanelli, Larkin, Rivera, and Carney.

About an hour before the shooting, Rivera tried calling Larkin twice to get the $10 back but Larkin would not answer his calls, Dolhun said.

Stefanelli was able to get in touch with Larkin, which caused Rivera to feel disrespected, Dolhun said.

Around 10 p.m., Stefanelli and Rivera, in a black Kia sedan, picked up Larkin then dropped him off at his apartment at 2 1/2 Little River St.

“Carlos Rivera gets out of the Kia and starts following Jeffrey Larkin down Grand Avenue toward Emerson Street,” she said, adding that Larkin tried walking away but was pursued by Rivera who wanted to settle the score.

Words were exchanged, Dolhun said, then Rivera pulled out a black semi-automatic handgun and fired two shots at Larkin, one of them striking him in the left side of his chest causing his death.

Rivera’s defense lawyer, Edward Hayden, told the jury that Stefanelli told a different version of what happened to police, the prosecutor and a grand jury.

Haverhill Police Officer Justin Graham testified that two bullet casings were retrieved from the area where Larkin was found and that a bullet was retrieved from the siding of a house. The jury was also told that a crack pipe and a torch cigarette lighter, a plastic Baggie with residue and a white Nike sneaker were also found near Larkin’s body.

A State Police crime lab expert testified that no DNA or fingerprints were detected on the bullet casings, crack pipe or lighter.

The gun used to kill Larkin was recovered in November 2018 by a State Police dive team from a body of water in New Hampshire. It also showed no traces of fingerprints or DNA, a crime lab expert testified.

Dolhun said that following Larkin’s murder, Rivera hid the gun in the basement of an apartment on Temple Street in Lowell where Stefanelli was staying with a friend.

Several months later, Dolhun said. Stefanelli sold it to a man who wanted a gun for protection and later gave it to one of his brothers who disposed of it in a river near his aunt’s Seaverns Bridge Road property in Merrimack, New Hampshire.

Exeter - Peggy Williams, 81, of Exeter, NH, died peacefully on October 18, 2021, surrounded by her loving family. She was born Margaret "Peggy" Casey, to her parents, Daniel J. Casey and Bernice (Walsh) Casey, of Bradford, MA, the founders of the DJ Casey Paper Co. in Haverhill. She resided …