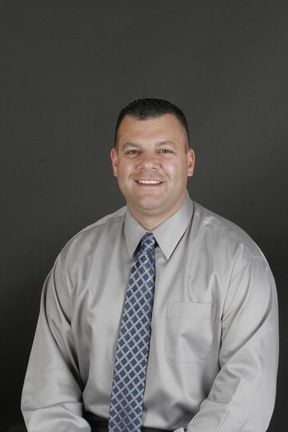 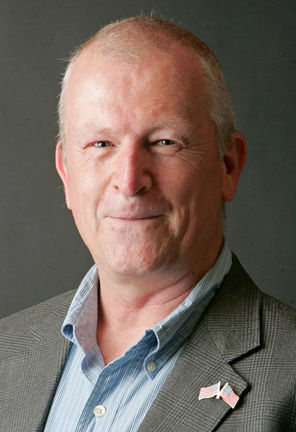 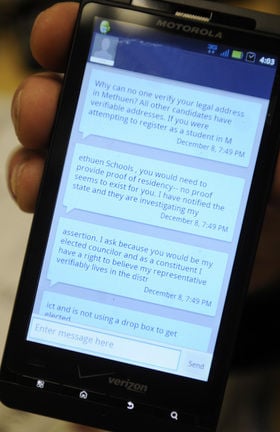 Fountain — a North Andover firefighter — was working Thursday night when he received four text messages from Methuen resident Jack Burke, according to a police report.

Fountain said yesterday Burke has also been following him for several weeks.

"I'm newly elected. I just want to get in there," said Fountain, who will take office in January. "I don't understand what this person's obsession with me is."

Burke identified himself only as one of Fountain's constituents in the text messages, which Fountain provided to The Eagle-Tribune yesterday.

"Why can no one verify your legal address in Methuen?" Burke wrote in the messages. " ... I have notified the state and they are investigating my assertion. I ask because you would be my elected councilor and as a constituent I have a right to believe my representative verifiably lives in the district and is not using a drop box to get elected."

Yesterday, Burke told the newspaper he did send the text messages and that there is nothing wrong with them. He said he simply wants information about Fountain's address because he is an elected official.

Both Fountain and Burke live in Methuen's West District.

The police report noting Fountain's complaint about the text messages describes them as "harassing.''

Fountain upset incumbent West District City Councilor Jim Hajjar in the Nov. 8 municipal election. Fountain said he has lived at the Spicket Commons apartments, 19 Hampshire Road, Methuen, since May. Before that, he said he lived in the city's Central District beginning in 2008.

Fountain said he first moved to Methuen in 1999.

Burke, a Canobieola Road resident, ran unsuccessfully for West District council in 2009. He is a volunteer with Methuen Community Television and frequently attends City Council meetings.

"I'm a watch-dog for this city, and I keep in pretty constant contact with my elected officials, whether they like it or not," Burke said yesterday.

Fountain said he has spotted Burke parked outside his apartment several times in recent weeks. But Burke said yesterday he only went to the apartment complex once.

Burke said he has filed several Freedom of Information Requests inquiring about Fountain's legal address, including with the town of North Andover and city of Methuen.

"He's an elected official in Methuen," Burke said. "I should be able to know where he lives. It should be public knowledge. It's almost as if you have to take his word for it."

According to the police report, Fountain said he received an email Nov. 28 from Assistant North Andover Town Manager Ray Santilli, informing Fountain that Burke came into Town Hall asking to see Fountain's personnel file. Santilli told Burke the information was confidential, "especially since Mr. Fountain works in the public safety field," according to the report.

North Andover police left a message with Burke Thursday. Burke said that early yesterday evening he called police back and left a message of his own, but had yet to hear back.

"Quite honestly, I didn't do anything wrong," Burke said. "I didn't cross any lines."

Fountain said he and Burke have attended the same City Council meetings, but that they had not interacted with each other before the text exchange Thursday night.

Fountain said he contacted police out of concern for his safety and that of his son.

"It makes me a little apprehensive and the protective instinct kicks in," Fountain said.