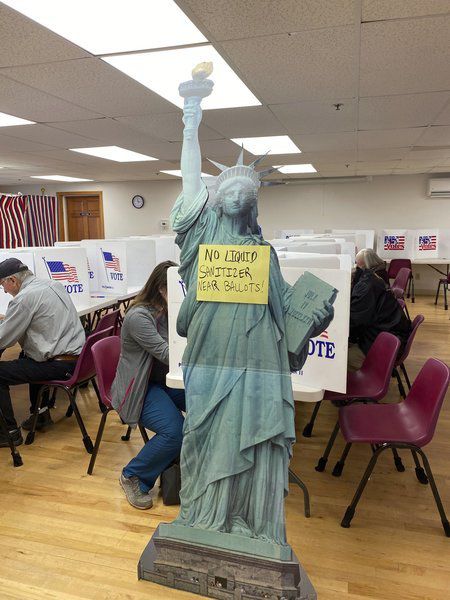 A sign orders voters to keep liquid sanitizer away from ballots Tuesday at a polling place in Atkinson.ERIN NOLAN/Staff photo 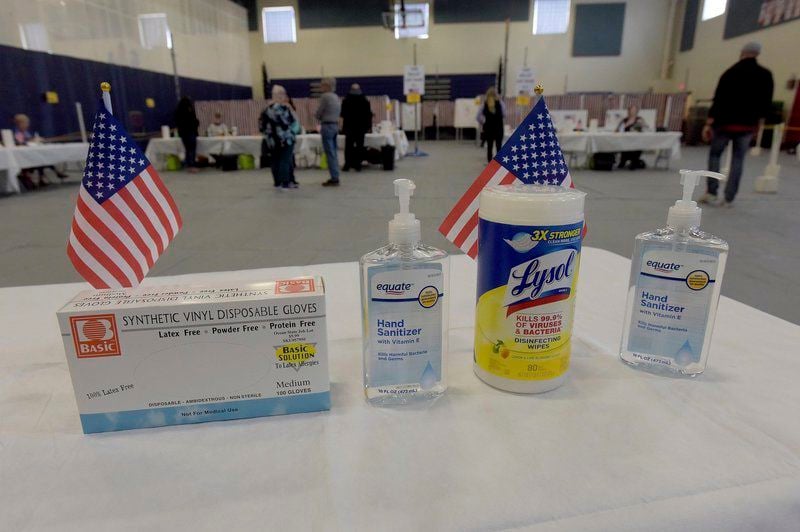 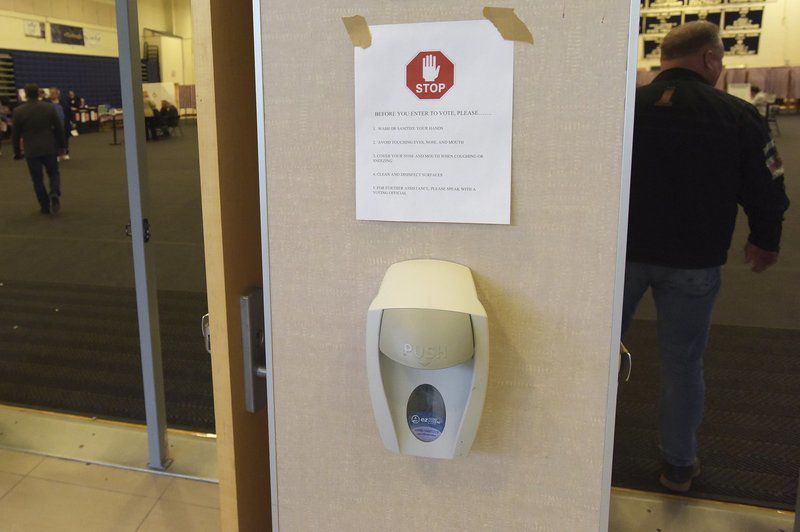 TIM JEAN/Staff photo. A sign outside the Windham High gymnasium asks residents to wash or sanitize hands before filling out their ballots.

A sign orders voters to keep liquid sanitizer away from ballots Tuesday at a polling place in Atkinson.ERIN NOLAN/Staff photo

TIM JEAN/Staff photo. A sign outside the Windham High gymnasium asks residents to wash or sanitize hands before filling out their ballots.

Hale said that both of Atkinson’s ballot scanners were temporarily clogged by ballots that were wet with disinfectant or hand sanitizer.

“It is definitely the year of coronavirus,” she said, referencing the highly contagious, flu-like illness commonly called COVID-19 that has prompted multiple states, including Massachusetts, to declare a state of emergency.

She said that some voters brought their own alcohol-based disinfectant to clean both their hands and the voting booths. When ballots came into contact with the disinfectant, she said, they began to break down and clog the machine.

“The disinfectant is weakening the paper structure,” Hale said. “That’s what I’m seeing, anyway. I am not an expert, but that is what I am seeing.”

The issue was only able to be remedied by calling LHS Associates, the company that distributes the machines.

Hale said the first machine clogged at around 12:30 p.m. She said an LHS employee promptly came and fixed the machine, but the second scanner broke at around 2:30 p.m., about 45 minutes after he left.

“He was able to pull out the ballot, but the little pieces are getting jammed in the rollers,” Hale said. “People are freaking out about it, but you can’t put in a moist ballot.”

Hale said one of the LHS employees who fixed a voting machine said this issue was highly unusual. According to Hale, the LHS worker said the company typically has very few, if any, issues during municipal elections. By the afternoon, Hale said the company had already heard of 26 cases of a machine being clogged by moist ballots.

Atkinson wasn’t the only town running into problems related to an increased use of hand sanitizer.

“We had a couple of issues with the boxes because of hand sanitizer,” said Salem Town Clerk Susan Wall. “They needed to swap out two machines because of paper jams at Barron and North Salem School.”

Wall noted that, despite the issue, every vote was counted.

“When placing the chips back into the machines the numbers remained the same,” she said.

“What people are doing is they are making the ballots wet with either wipes or the actual hand sanitizer and then they are putting it through the machine and making it jammed,” Bottai said. “So we’ve been dealing with that, luckily our vendor has been very responsive and helpful.”

In Hampstead, Town Clerk Patricia Curran said the town was providing wipes to voters and only had an issue with one ballot.

While not every town struggled with voters casting wet ballots, many towns took extra steps to keep polling places clean amidst coronavirus concerns.

“We got everything we could find yesterday,” Wall said, describing the last-minute precautions taken to get disinfecting supplies due to the outbreak.

In Danville, Town Clerk Christine Tracey said the voting stations were cleaned at least once an hour, and she pointed out that hand sanitizer was available.

Sandown Town Moderator Kevin Major said the town didn’t have any issues with machines clogging, but was sure to put hand sanitizer at both the check-in and exit. He also said they had someone disinfecting all of the voting booths and pens every hour.

RAYMOND - William Sarofian, of Raymond, N.H., passed away peacefully at the age of 56, May 14, 2020, from heart disease. Bill was born in Haverhill, Mass., and raised In Plaistow, N.H. He worked for many years for his father at Plaistow Drywall. Bill loved fishing especially the Kangamangus …