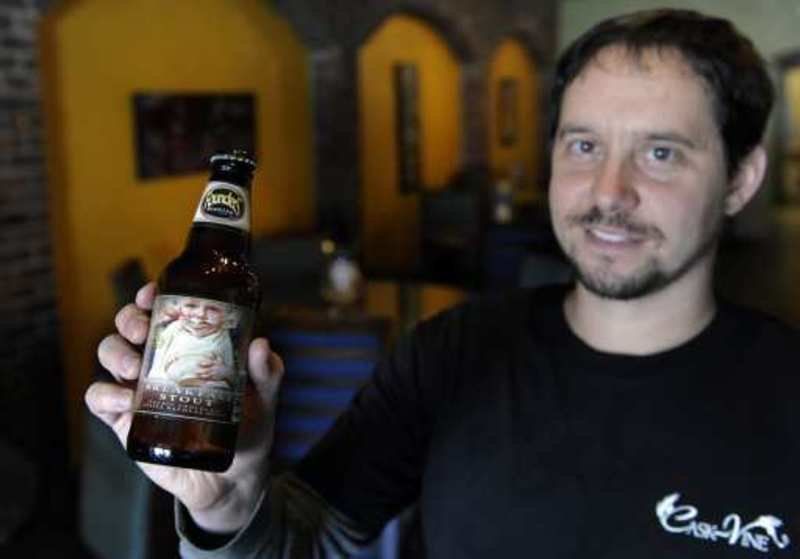 Andy Day, co-owner of Cask and Vine restaurant in Derry and The Drinkery in Londonderry, holds a bottle of Breakfast Stout. It's been illegal to sell bottles of the beer in New Hampshire but a new law will allow its sale if approval is granted by the state Liquor Commission. 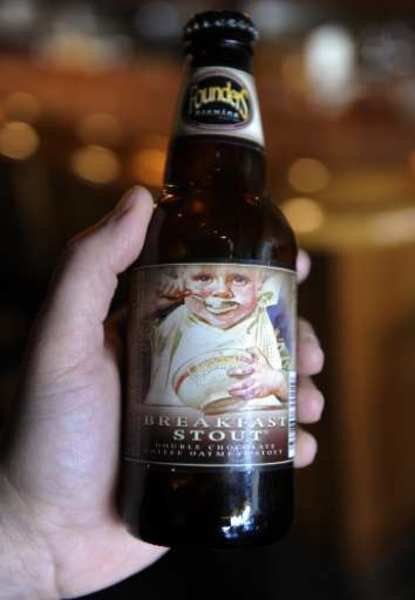 The New Hampshire Legislature recently passed a law allowing the sale of bottles of Breakfast Stout. It’s been illegal to sell the beer in the state because of the child’s image on the label.

Andy Day, co-owner of Cask and Vine restaurant in Derry and The Drinkery in Londonderry, holds a bottle of Breakfast Stout. It's been illegal to sell bottles of the beer in New Hampshire but a new law will allow its sale if approval is granted by the state Liquor Commission.

The New Hampshire Legislature recently passed a law allowing the sale of bottles of Breakfast Stout. It’s been illegal to sell the beer in the state because of the child’s image on the label.

A battle that's been brewing for more than two years is finally over — or is it?

When the New Hampshire Legislature recently overrode a veto by Gov. Maggie Hassan, lawmakers permitted the sale of bottles of Breakfast Stout.

It's a hearty seasonal beer restricted from distribution in the Granite State because the label featured an image of a young child.

"We've had customers ask about it two or three times a week for the past year," said Matt Morin, co-owner of Lazy Dog Beer Shoppe in Londonderry. "Once it becomes available, there will be lines out the door."

But store, restaurant and bar owners eager to place their orders will have to hold off.

The New Hampshire Liquor Commission — opposed to the sale of Breakfast Stout in the past  — must still grant approval.

The beer, crafted by Founders Brewing Co. in Michigan, could not be sold in the state because of the image of the child eating oatmeal on the label. It didn't prevent Breakfast Stout from being sold on tap at restaurants and bars.

Opponents claim that minors are more likely to consume a bottle of alcohol if there is a child on the label. Proponents say it's an economic issue since people are traveling to Massachusetts to buy the beer,

The Liquor Commission refused to allow the sale of Breakfast Stout because of a state law, RSA 179:31, that says "Advertising of liquor or beverages shall not contain: any reference to minors, pictorial or otherwise."

But beer lovers, including establishment owners, fought back. Legislation to repeal the ban failed until Rep. Keith Murphy, R-Bedford, successfully led the charge to pass House Bill 122 and lawmakers later overrode the veto.

Now, law or no law — the Liquor Commission must decide if it will allow bottles of Breakfast Stout to be sold.

James Wilson, the Liquor Commission's director of enforcement and licensing, said Wednesday his office will make its recommendation to the commission after reviewing Founders' request to sell bottles of its beer in New Hampshire.

"NHLC has been in communication with Founders and has been informed that they will be resubmitting a copy of the label and packaging for review," Wilson said. "A determination should be made regarding this label in late August.”

Wilson has said in the past the commission would strongly consider allowing the beer if a state law were passed.

The new law, effective Aug. 23, was sponsored by Rep. Keith Murphy, R-Bedford, after a similar bill was defeated during the previous legislative session.

Murphy, owner of Murphy's Taproom in Manchester, said he sponsored the bill to make the highly sought after beverage available to Granite Staters and not to benefit his business since he can already sell it on tap.

"This helps beer store owners because many people say this is the best beer in the country," Murphy said. "When we get it, we sell out almost immediately."

Murphy, Morin and Andy Day, co-owner of Cask and Vine restaurant in Derry and The Drinkery in Londonderry, are among those who say it's a matter of principle and economics, not about minors drinking alcohol.

The manufacture and sale of craft beer in New Hampshire is playing a growing role in supporting the state's economy, they said.

"I'm losing revenue from not selling this product because people are going out of state to buy it," Day said.

"This just isn't people saying, 'We need more beer.' There are economics to it," he added. "Breweries are hesitant to come into the state because of the liquor laws."

Day, who has rallied in support of legislation for the past few years, circulated a petition for allowing the beer and hosted an event at his restaurant in October that attracted 55 loyal supporters of the cause.

"We had a Founders Breakfast Stout party where everyone was wearing pajamas," he said.

The three proprietors said it's absurd for anyone to think having a picture of a child on a beer bottle would entice minors to drink alcohol.

"It's not intended to appeal to minors," Murphy said. "No minor is going to pick up a bottle with a baby eating oatmeal."

The proprietors said the commission had no problem granting approval for Baltic Porter, a beer brewed by Smuttynose Brewing Co. in Hampton that also features a child on the label.

Day, the father of 10- and 14-year-olds, said young people are more likely to drink fruit-flavored beverages already being sold with the commission's approval. There's also Not Your Father's Root Beer, which contains 5.9 percent alcohol, he said.

"I don't want to sell beer to kids," Morin. "They wouldn't like it anyway."

The legislation sailed through both the House and Senate on voice votes before it was opposed by the governor.

In her veto message, Hassan said alcohol abuse is a serious issue in the state, saying New Hampshire has one of the highest underage drinking rates in the United States.

"In changing the way that we regulate, and in some cases, loosening restrictions on referring to minors in the advertisement and sale of alcoholic beverages, House Bill 122 could undermine our efforts to prevent underage drinking," the governor said.

Now, the proprietors are now waiting to see if Breakfast Stout will receive final approval from the Liquor Commission.