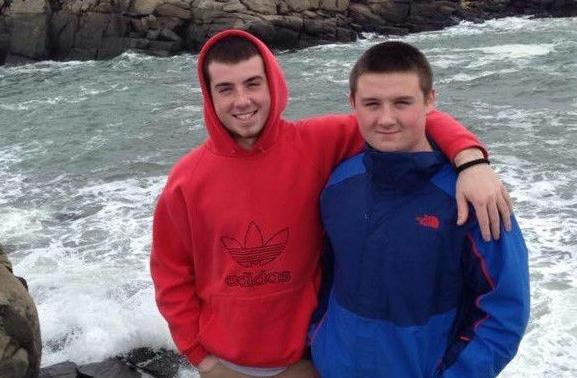 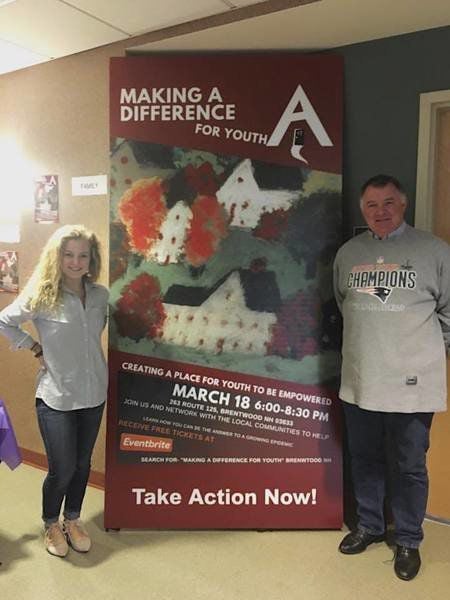 Courtesy photoAustin 17 House Communications Director Lindsey Messina, left, and founder Mark Anderson pose for a photo at the Youth Summit on Opiod Awareness, where they promoted Austin 17 House to students from across the region. 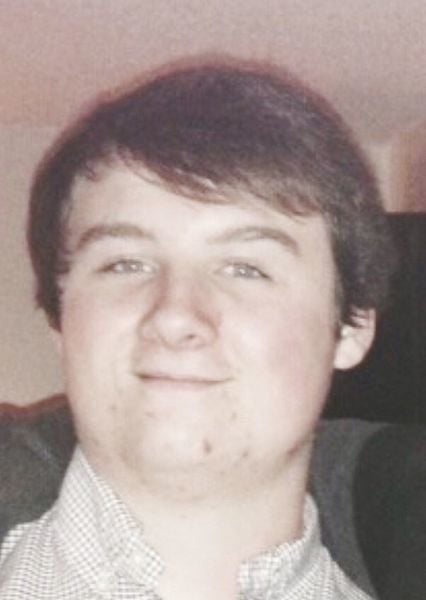 Courtesy photoAustin 17 House Communications Director Lindsey Messina, left, and founder Mark Anderson pose for a photo at the Youth Summit on Opiod Awareness, where they promoted Austin 17 House to students from across the region.

BRENTWOOD —  Vacant for the last five years, a gymnasium attached to Grace Ministries International Church on Route 125 rumbles with an echo.

But Mark Anderson, a Fremont, New Hampshire resident from Belfast, Northern Ireland, plans to change that with the help of volunteers from across the Merrimack Valley.

Anderson has dreamed of opening a community center for years, but his plan was set into motion when his 17-year-old son, Austin, died in a car crash on Dec. 3, 2016.

Three months after the tragic loss, Austin 17 House is becoming a reality organically, he said. The project is being funded with $11,000 raised by 170 people on a GoFundMe page posted online three months ago.

Several relatives, who run the Andover-based paving and construction company J.W. Watson, will use decades of experience to tend to 23 acres of land out back, creating trails and greenhouses.

"We're going to help with anything we can give manpower to," said Ryan Watson, Austin's 27-year-old cousin.

"We're also going to be finding as many people who want to help out as possible. I'm sure there will be a ton of them," he said. "(Austin) was just an awesome kid, always outgoing, always willing to help anyone out."

Sue Gerstenberger, a longtime family friend from Windham, is one of several people helping with the interior, which will include a basketball court, sports equipment, pool tables, couches and a coffee bar.

It's a place that Austin would have spent time at, his father said.

Recently earning the status of a non-profit organization, the goal is to create a place where youth and adults — from anywhere — can strengthen their identity and develop leadership skills.

"This is prevention," Mark said. "This is us trying to get our kids something to do before they get into drugs. If they're on the edge of it, they can come here (for guidance and resources). We're not blind to the fact that not everyone coming in will be fine. The essence of what we're trying to do is give them space to enjoy themselves."

Austin did not struggle with addiction, but the region's monstrous opioid-related death toll is not lost on the mourning father, he said.

"Austin was just a fun kid," Anderson said. "He loved art and all of that stuff. At his wake, there were over 250 kids there who talked about how Austin made them smile. They loved him and they appreciated the help he gave them when they needed it."

A week before his 18th birthday, Austin was in the passenger seat of a 2002 Nissan Altima driven by his friend Taylor Nelson, 19. Both attended Sanborn Regional High School.

Austin, however, was in his senior year at Great Bay Charter School in Exeter at the time.

The car veered off Route 107, in Seabrook, before striking a tree and killing both teens. The cause of the crash remains under investigation.

Gerstenberger said she remembers the funeral clearly — it was where she heard Austin's father commit to cultivating his longtime dream of opening a community center.

"I knew he was going to do something, and he knew it at the funeral, too," she recalled. "This could be just the beginning. With a good heart, good things will happen. I totally believe in this cause and the good it will do."

Gerstenberger has been recruiting volunteers to assemble the empty Brentwood space, as well as businesses willing to make donations.

Anyone interested in getting involved can email her at thegerstys@aol.com.

"(My husband) and I want to be mentors in different areas, too," she added. "We'll do whatever it takes to make these teens feel part of a community."

The Rev. Allen Cook of Grace Ministries International, who is also a state representative, is overjoyed by his church's newest tenant.

"When Mark approached me, I thought it would be amazing if people could be drawn together; For families of whatever type, people who live and work together, to be impacted," he said. "I see Austin 17 House going to the root of the problem.

"If this thing really takes off, like we hope and anticipate that it will, we may be able to have a counseling center there in the back of the building. There's space to lend itself to that and I would fully support it in any way possible. The space used to be a school, but that closed down years ago."

Austin 17 House communications director Lindsey Messina said all are welcome to a March 18 informational gathering at the 263 Route 125 church. It will start at 6 p.m.

"My passion for this comes from my four younger siblings," she said. "They have so much talent and so much driving them to be successful. When things don't play out, it's too easy for people to turn to drugs and bad things. Society says success is one-track, but it's not."

"This place is the community's," she added. "We're just here to guide them."