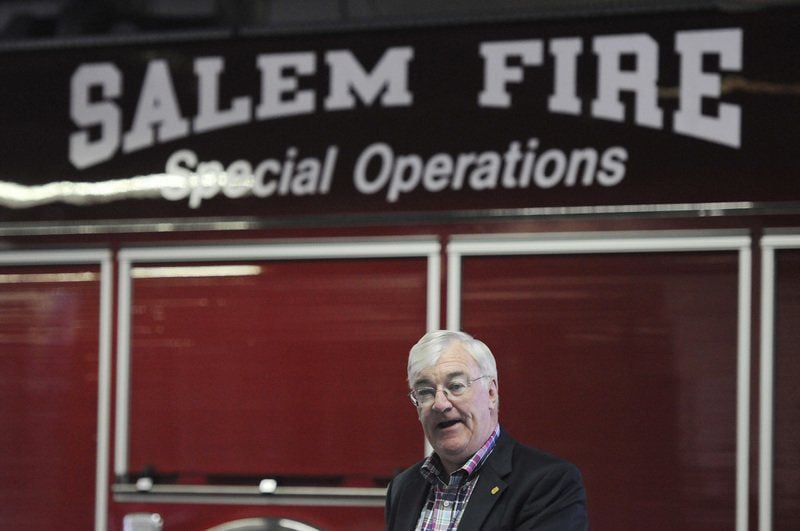 PAUL BILODEAU/Staff photoGuest speaker Barry Mawn, who was the Assistant Director of the FBI in New York City at the time of the 2001 terror attacks, speaks during the Salem Rotary Club's Sept. 11 remembrance breakfast held at the Salem fire station on Main Street. 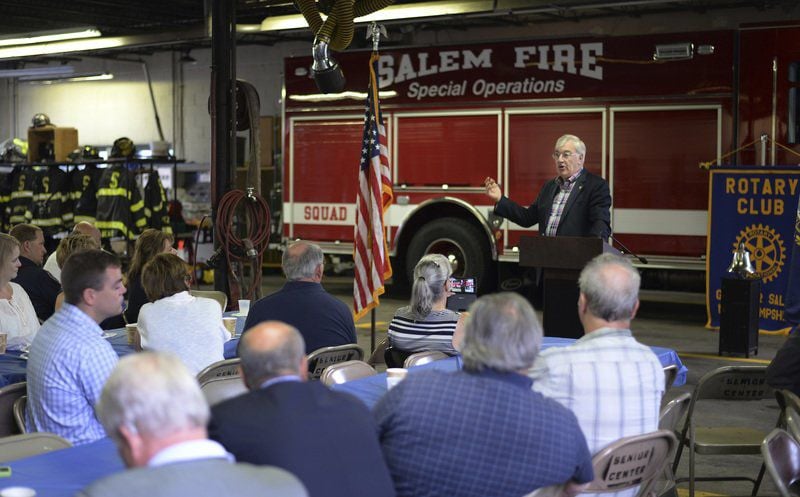 PAUL BILODEAU/Staff photoGuest speaker Barry Mawn, who was the Assistant Director of the FBI in New York City at the time of the 2001 terror attacks, speaks during the Salem Rotary Club's 9/11 remembrance breakfast held at the Salem fire station on Main Street.

PAUL BILODEAU/Staff photoGuest speaker Barry Mawn, who was the Assistant Director of the FBI in New York City at the time of the 2001 terror attacks, speaks during the Salem Rotary Club's Sept. 11 remembrance breakfast held at the Salem fire station on Main Street.

PAUL BILODEAU/Staff photoGuest speaker Barry Mawn, who was the Assistant Director of the FBI in New York City at the time of the 2001 terror attacks, speaks during the Salem Rotary Club's 9/11 remembrance breakfast held at the Salem fire station on Main Street.

SALEM, N.H. —Barry Mawn said he wouldn't be alive today if it weren't for the firefighters who saved him several times on Sept. 11, 2001.

When two hijacked airplanes crashed into the World Trade Center, he was the assistant director of the FBI's New York City bureau headquartered just down the street. He was quickly thrust into the epicenter of each graphic scene witnessed by most Americans only on television.

Mawn, now 71, recalled the defining day Friday before the Greater Salem Rotary Club. He was an honorary guest at the group's annual Sept. 11 remembrance breakfast.

More than 50 Rotarians and first responders from Salem, Windham and Derry gathered in the garage of the Salem Central Fire Station on Main Street to remember the 2,996 lives lost 15 years ago. The name of each victim was read to the crowd.

Mawn, who splits his retirement between Massachusetts and Florida, said he narrowly escaped becoming another statistic.

His office was so close to the city's business hub that he heard a bone-chilling boom. He described it as if a jet had broken the sound barrier on the nearby Hudson River.

His assistant let out a scream that had him on his feet, running toward her. Her window provided the first glimpse of destructive chaos.

"People were turning to me and asking, 'What are we going to do next, boss?'" he said.

Past experience with high-profile cases — including the Olympic bombing in Atlanta, the "Unabomber" Ted Kaczynski and Boston mobster Whitey Bulger — were said to help in each decision that followed.

"I sent SWAT out with response teams," he explained. "And on second thought, I told them to send the terrorism attack force."

Mawn assigned himself to work directly with the police commander in the middle of the action. It was just before 9 a.m., and within minutes of arriving, another plane destroyed the second tower.

It created an "ungodly rumble" the assistant FBI director said he would never forget.

Salem Fire Chief Paul Parisi noted that 5,400 people have since battled cancers and related illnesses from the smoky, soot-filled air that resulted.

"We need to stay steadfast in our support," Parisi said. "A single loss in the line of duty affects all of us. And there was far too much loss overall that day."

Mawn recalled one death that occurred just feet from him.

After seeking refuge at nearby 7 World Trade Center, a firefighter yelled out to a few people who congregated there to hold onto each other regardless of what happened next. Before he could tell them to cover their noses and mouths, part of the falling building killed him.

Several weeks later, Mawn would unexpectedly meet one of the only other survivors — who he'd been side by side with — at a retirement party for a New York City police officer.

That was about the same time Parisi and his Salem colleagues visited ground zero to pay their respects.

"It's poignant when you hear the names of victims being read off," he said. "It seems like they're never going to stop."

A 38-year Rotarian Nick Czifrik — who is also a longtime friend of Mawn — agreed that remembering each victim should remain an annual tradition.

"Everyone who survived that day carries scars," he said. "Whether they be physical or emotional. We must remember that."

As a Hungarian refugee who came to the United States in 1956 with no belongings or understanding of the English language, Czifrik sees the club as a way to give back to the community and welcome guests like Mawn who can enrich their understanding of historical events.

In closing, Mawn told the Rotarians about the hours that ensued following the initial collapse of the twin towers.

"We were forced to set up a staging office several blocks away," he said. "That ended up saving lives because we got everyone in the bureau away from the site. We only ended up losing one agent."

Three crime scenes were established at ground zero, the city's morgue and a nearby landfill, but never led to the discovery of key evidence, Mawn said.

By that October, the Justice Department was leading the case from Washington.

He has yet to return to ground zero and see the memorials that have been erected in place of the World Trace Center. He's unsure if he ever will.