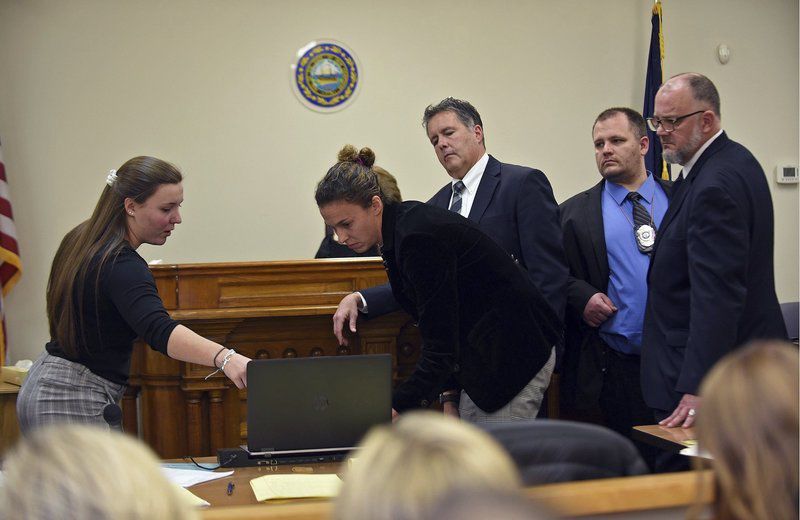 RYAN HUTTON/Staff photo. From left, Victoria Boutin, 19, prosecutor Kate Coyle, defense attorney Richard Monteith, a Plaistow District Court officer and Daniel Joyce examine a surveillance video from Timberlane Regional High School recorded on Oct. 9, 2018. The video showed Joyce committing, what the court decided, was simple assault on Boutin. Joyce was found guilty, ordered to stay away from Boutin and her family, and to pay a $250 fine. 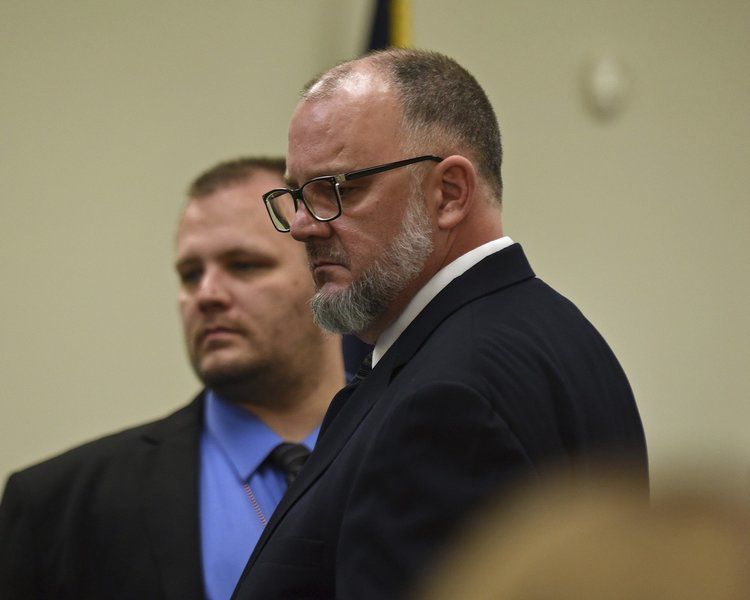 RYAN HUTTON/Staff photo. Former Timberlane Regional High School teacher Daniel Joyce views a school surveillance video from Oct. 9, 2018 in Plaistow District Court on Tuesday. The judge found Joyce guilty of simple assault on former student Victoria Boutin, and ordered him to stay away from Boutin and her family and to pay a $250 fine. 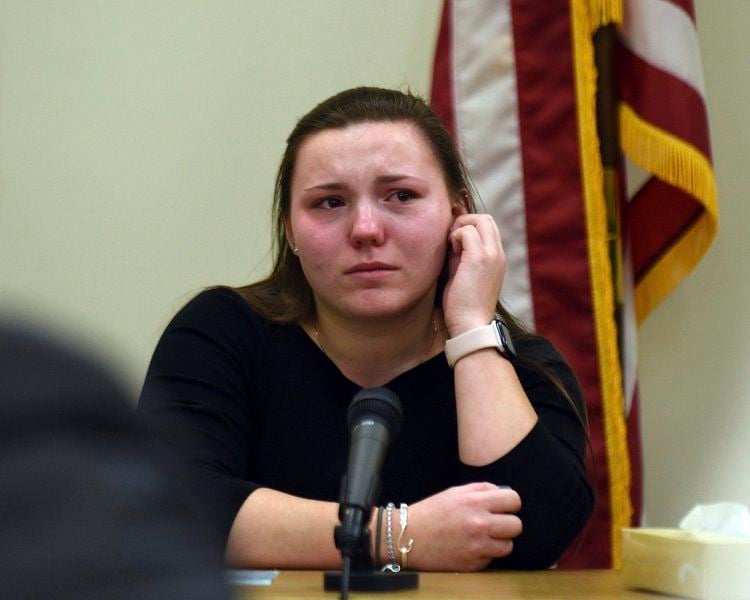 RYAN HUTTON/Staff photo. From left, Victoria Boutin, 19, prosecutor Kate Coyle, defense attorney Richard Monteith, a Plaistow District Court officer and Daniel Joyce examine a surveillance video from Timberlane Regional High School recorded on Oct. 9, 2018. The video showed Joyce committing, what the court decided, was simple assault on Boutin. Joyce was found guilty, ordered to stay away from Boutin and her family, and to pay a $250 fine.

RYAN HUTTON/Staff photo. Former Timberlane Regional High School teacher Daniel Joyce views a school surveillance video from Oct. 9, 2018 in Plaistow District Court on Tuesday. The judge found Joyce guilty of simple assault on former student Victoria Boutin, and ordered him to stay away from Boutin and her family and to pay a $250 fine.

PLAISTOW — A former Timberlane Regional High School social studies teacher was convicted Tuesday of assaulting a student at the school in 2018.

“This physical contact should never have happened,” DeVries said.

Joyce is required to pay a $250 fine or perform 31 hours of community service. Until Tuesday, Joyce was on paid administrative leave from the school, according to Superintendent Earl Metzler.

Richard Monteith, Joyce’s lawyer, said that while Joyce respects the court’s decision, he does not agree with it. He added that they are considering an appeal.

“It was very brief innocuous contact and it is very unfortunate,” Monteith said, adding that Joyce is “devastated.”

Boutin and prosecutor Kate Coyle could not be reached for comment before press time.

According to both Boutin’s and Joyce’s testimonies, the incident occurred on Oct. 9, 2018. Court documents show that Joyce emailed Boutin, then 17, at 3:05 a.m. asking her to come meet him in his classroom between first and second periods. Joyce testified that he is usually awake at this time and preparing for the work day.

Boutin, visibly upset, testified that she felt uncomfortable about meeting Joyce in his room. She said she came to school early to consult her guidance counselor about the email and decided not to meet Joyce in his room.

According to court documents, the quote read “The tests we face in life’s journey are not to reveal our weaknesses, but to help us discover our inner strengths. We can only know how strong we are when we strive and thrive behind the challenges we face. Kemi Sogunle.”

Joyce testified that the quote was meant to refer to a sick relative of Boutin’s.

The gift was a leather lanyard, according to court documents. Boutin and Joyce both said that Joyce had given five school community members a similar lanyard, and that if Boutin was able to identify all five, Joyce said he would give her a lanyard as well. Boutin said she had identified two staff members with a lanyard.

Joyce acknowledged that giving students gifts was against school policy.

“I pushed it to the side of my desk because, at that point, everyone was looking at me and I didn’t want the attention,” Boutin said on the witness stand. She said she was not aware of what the gift was at the time.

Joyce testified that he placed the gift on Boutin’s desk on his way to use the bathroom. He added that the reason he wanted to meet with her earlier was so that he would not have to single Boutin out in front of the class as he did.

At the end of class, both Boutin and Joyce testified, Boutin and the rest of the class were stacking chairs onto the desks to prepare for the end of the day when Joyce blocked Boutin’s route to the door.

“Tori had tried to move towards the door, which I don’t allow,” Joyce stated on the stand. He added that he asked why she was moving closer to the door.

Boutin said Joyce was very close to her, so close that his water bottle was centimeters from her face, according to court documents.

Boutin knocked the water bottle out of Joyce’s hands, she said.

After class, Boutin testified, she walked outside and Joyce came out of the emergency exit. She said he raised his voice at her.

Both Boutin and Joyce remembered Joyce saying something along the lines of “You have nothing to say? Nothing at all?” to Boutin.

Joyce said he was smiling and joking about the fact that Boutin did not thank him for the lanyard.

“He walked up to me and put his forearm on me and pushed me against the right wall,” Boutin testified.

According to Joyce, he did not push Boutin, but rather put his hand on her knapsack to signal that he was having a conversation with her.

According to both Boutin and another student who also testified, Joyce called Boutin “a little (expletive)” as she walked away.

A video recording of the incident acquired by the Plaistow Police Department shows the interaction occurring over the course of two seconds.

Boutin said she briefly discussed the ordeal with her friend who was ahead of her and then reported the incident to the assistant principal.

“I was just in shock. I was shaking. I was crying. I didn't know what to do,” she testified.

After the incident, Superintendent Earl Metzler said, Joyce was placed on paid administrative leave while an internal investigation took place. In January of 2019, the school board conducted a hearing with evidence presented by the administration and unanimously voted to reinstate Joyce as a teacher, Metzler said.

For approximately 10 days, according to Metzler, Joyce was not paid, and then he returned to Timberlane as a teacher.

“These were two separate, unique trials,” Timberlane School Board Chair Shawn O’Neil said. “The trial he was dealing with today, I understand there was new information brought forward.”

He said unanimous decisions by the board are uncommon.

Joyce’s return to the school lasted only a few days, according to Metzler. Boutin’s family filed a stalking order against Joyce, and the teacher was put back on paid administrative leave.

Joyce remained on paid administrative leave until Tuesday, when he was convicted of assaulting Boutin.

“It is important that there was some sort of closure,” Metzler said. “What that closure will look like going forward is still to be determined.”

At the beginning of his testimony, Joyce spoke about his 18 years as a teacher at Timberlane.

“Teaching is my life's passion,” he said. “It is the identity I derive from being a role model that is trying to help younger members of our community understand the importance of being educated, of finding something that interests them to better their lives, and ultimately, all of our lives by them being successful.”