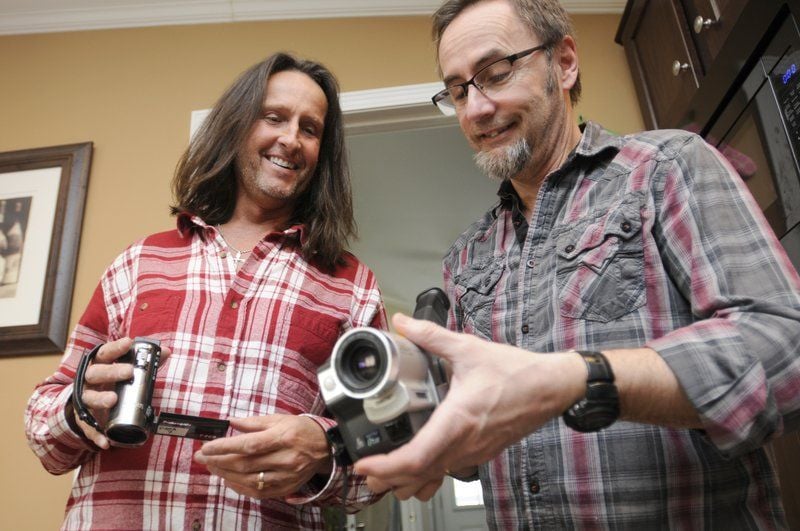 TIM JEAN/Staff photoFormer professional wrestler Jerry “The Candyman” Seavey, left, of Salem and friend Rich Damboise of Goffstown look at old video cameras they may use to record an upcoming project. The two have been filming paranormal adventures at haunted sites around New England and hope to get their own reality TV show. 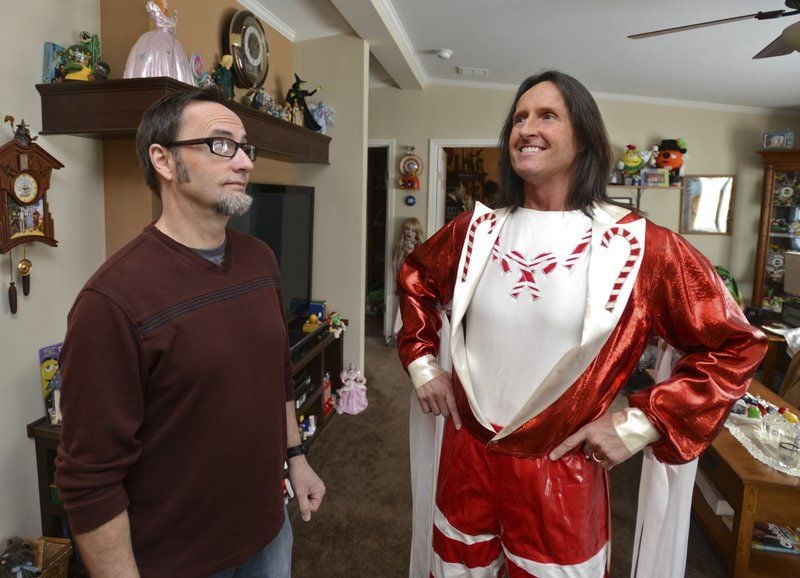 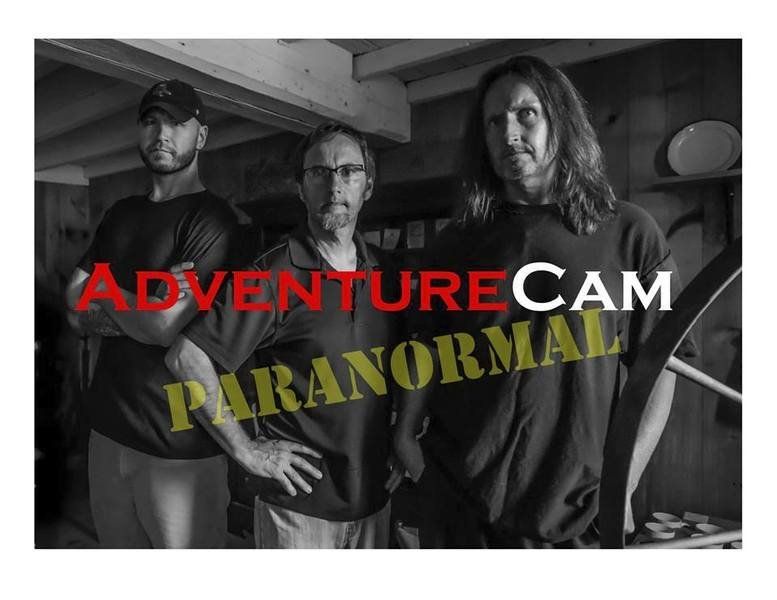 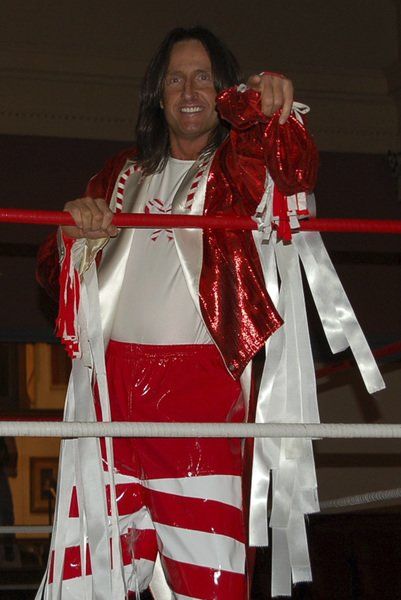 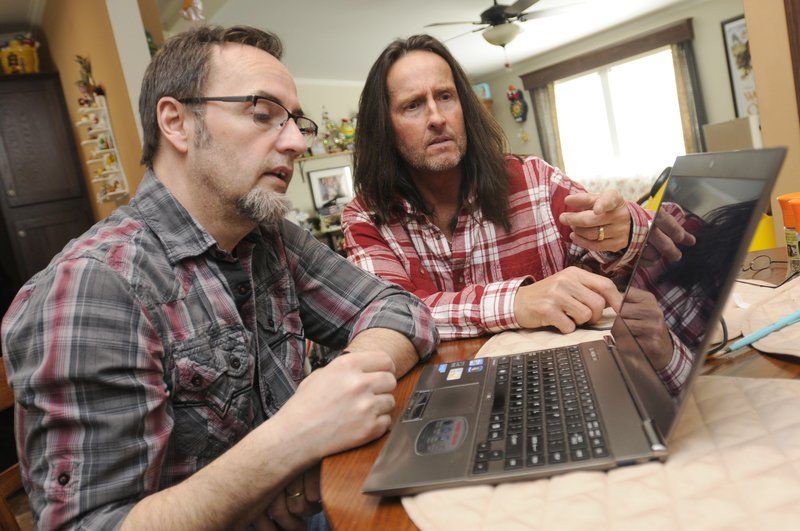 TIM JEAN/Staff photoJerry Seavey, right, of Salem, N.H., and Rich Damboise of Goffstown, edit video on a laptop they shot for an upcoming project. The two have been filming paranormal adventures at haunted sites around New England and hope to get their own reality TV show.

TIM JEAN/Staff photoFormer professional wrestler Jerry “The Candyman” Seavey, left, of Salem and friend Rich Damboise of Goffstown look at old video cameras they may use to record an upcoming project. The two have been filming paranormal adventures at haunted sites around New England and hope to get their own reality TV show.

TIM JEAN/Staff photoJerry Seavey, right, of Salem, N.H., and Rich Damboise of Goffstown, edit video on a laptop they shot for an upcoming project. The two have been filming paranormal adventures at haunted sites around New England and hope to get their own reality TV show.

SALEM, N.H. — As a child, Jerry Seavey dreamed of becoming a pro wrestler, building a makeshift ring in his Haverhill backyard.

He just never realized that dream would someday come true.

For 25 years, Seavey — known worldwide as “The Candyman” — enjoyed fame in the World Wrestling Federation and on the big screen.

He learned his craft from the legendary Walter “Killer” Kowalski and was known for his trademark red-and-white-striped outfit. Seavey, now 56, appeared in a handful of movies and television shows as well.

They include the popular game show “Deal or No Deal.” His most recent movie appearances were small parts in the 2010 films “Grown Ups,” starring Adam Sandler, and “The Fighter” starring Mark Wahlberg.

Serving as an extra in films was fun for Seavey, but it didn’t compare to competing with wrestling icons such as Hulk Hogan, Jake “The Snake” Roberts and George “The Animal” Steele.

But three decades of body slams and other wrestling moves took a toll on Seavey’s body, forcing him to officially retire three years ago.

“I broke my nose and my sternum, and I screwed up my back,” he said two years ago. “I can’t wrestle anymore and I want to keep my face in the spotlight.”

Seavey now works a local manufacturing job and seeks a return to the fame he once knew.

He just never realized he would become an amateur ghost hunter.

“I love this stuff more than you can imagine,” said Seavey, who now lives in Salem with his wife, Tina. “Everybody is watching it.”

Seavey and friends Rich Damboise of Goffstown and Christian Whitton of Chester have launched their own ghost hunting series on YouTube, called “Adventure Cam Paranormal.”

They hope it will become as popular as the hit television series “Ghost Adventures” and “Ghost Hunters” and that will someday have their own reality show.

As a matter of fact, they have filmed their escapades at some of the same haunted homes featured on those shows — the Houghton Mansion in North Adams, Massachusetts, and the S.K. Pierce Mansion in Gardner, Massachusetts.

Later this month, they will seek out spirits at The Governor’s Mansion in Hampton Falls and then at The Foot Hills of Warner in May.

The friends fell into ghost hunting by accident while filming a previous series, “Adventure Cam.”

“These two houses are so notorious for being haunted — it’s been unbelievable,” Damboise said Monday. “We’re having a great time.”

The first big break was last year when Rick Revett of the Houghton Mansion invited them to investigate and film their exploits at the 19th century haunted home.

“The caretaker was a big wrestling fan and he remembered Jerry,” Damboise said. “It got us right through the door.”

“Having the name really makes a difference,” Seavey said

Since then, the trio has been seeing shadows, hearing strange noises and watching objects move on their own. They have also been joined by local physic medium Colleen Costello.

At the Houghton Mansion, they watched in awe as a child’s pinwheel turned without assistance. An apparition of a 4-year-old girl, known as Laura, is believed to haunt the basement.

“It’s made a believer out of me,” Damboise said.

Laura is just one of several people whose spirits are said to haunt the home.

“We would say, ‘Turn on the flashlight’ — and it would go on,” Seavey said. “We would hear knocks and bangs on the wall.”

The home was once inhabited by North Adams’ first mayor, Albert Charles Houghton, who was injured in a car accident in 1914 that killed himself, his daughter Mary and a family friend.

Their chauffeur survived the crash but shot and killed himself 10 days later because he blamed himself for the tragedy.

They spent about seven hours one night at the Pierce Mansion, also known as the “The Victorian Mansion.” The group heard a lot of strange noises but didn’t see anything that night, Seavey said.

The mysterious occurrences there include a boy often seen looking out a window, he said.

It’s been challenging recording their adventures, said Damboise, a part-time photographer who also has a full-time job.

“It was tricky,” he said. “In both places, the batteries of (the video cameras) were getting drained in about five minutes. They usually last hours.”

It takes nearly 50 hours of editing to produce an hourlong video, Damboise said. He’s working on their second one now. Whitton does a lot of the group’s research.

But it’s a labor of love for the budding ghost hunters. They hope their videos will become a hit and lead to something bigger and better for the three friends.

“I do get the willies,” Seavey said of the haunted homes. “But I love it.”

Fortunately for “The Candyman, none of the spirits they have encountered have been willing to take on a former pro wrestler.

“They would probably want to wrestle me and throw me down,” Seavey said.