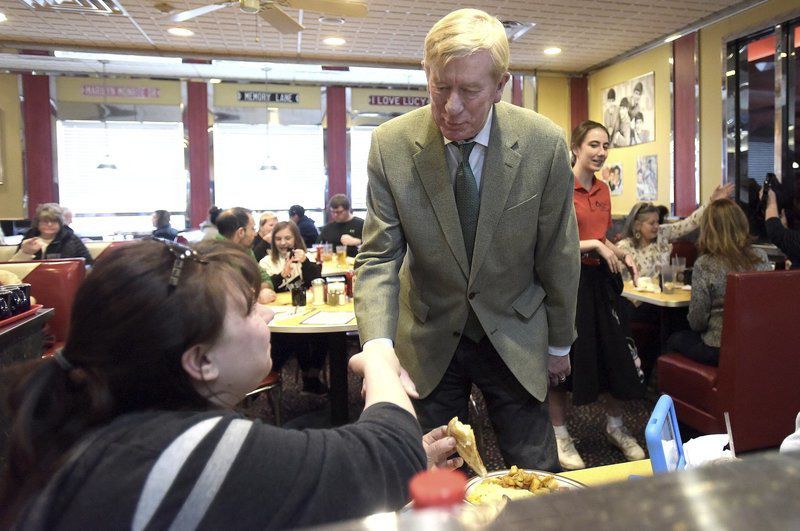 TIM JEAN/Staff photo. Bill Weld shakes hands with Chelsea Geneau, of Derry, during a campaign stop at MaryAnn's Diner. The former governor of Massachusetts is running as a Republican in the presidential primary. 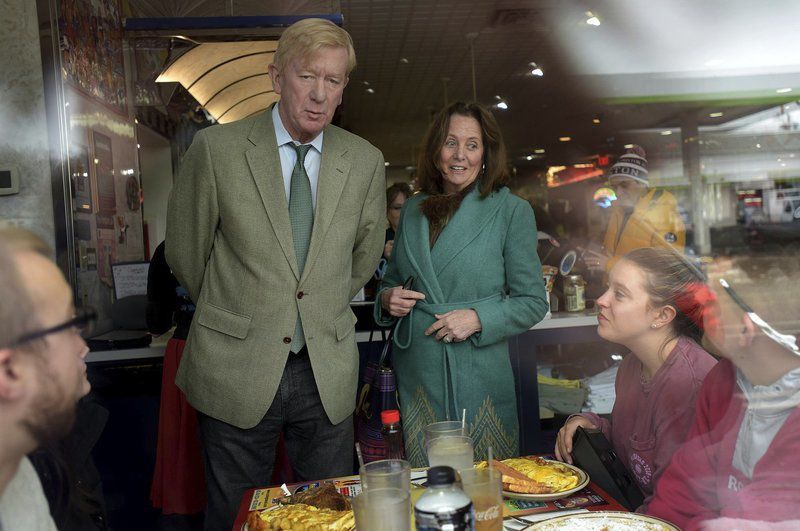 TIM JEAN/Staff photo. Bill Weld and his wife Leslie Marshall, seen through the windows, talk with voters during a campaign stop at MaryAnn's Diner in Derry. The former governor of Massachusetts is running as a Republican in the presidential primary. 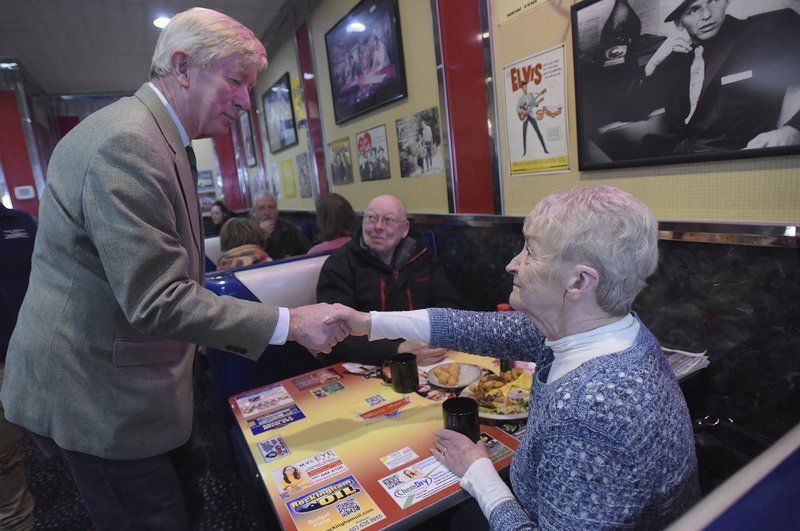 TIM JEAN/Staff photo. Bill Weld shakes hands with Sharon Dobbie, of Hampstead, during a campaign stop at MaryAnn's Diner. The former governor of Massachusetts is running as a Republican in the presidential primary.

TIM JEAN/Staff photo. Bill Weld shakes hands with Chelsea Geneau, of Derry, during a campaign stop at MaryAnn's Diner. The former governor of Massachusetts is running as a Republican in the presidential primary.

TIM JEAN/Staff photo. Bill Weld and his wife Leslie Marshall, seen through the windows, talk with voters during a campaign stop at MaryAnn's Diner in Derry. The former governor of Massachusetts is running as a Republican in the presidential primary.

TIM JEAN/Staff photo. Bill Weld shakes hands with Sharon Dobbie, of Hampstead, during a campaign stop at MaryAnn's Diner. The former governor of Massachusetts is running as a Republican in the presidential primary.

A few weeks away from New Hampshire’s first-in-the-nation primary, one presidential candidate strolled through MaryAnn’s Diner in Derry.

He approached a table with a smile, playfully put his hands up as if to apologize for being so bold and introduced himself. He exchanged a few laughs with the group of young people, and a campaign representative left a pamphlet on the table before they moved on.

There was a time when Bill Weld’s face was known in almost every household in the region, but today a few diners could be heard asking, “Who is he?”

But Weld, the former Republican governor of Massachusetts, continues to be optimistic that he can gain traction in Tuesday's New Hampshire primary.

“When I started running for governor back in the '90s in Massachusetts, I was zero percent, below asterisk,” he said. “And everybody told me not to run. And I said, ‘Thank you very much for your advice,’ and then I went on.”

With all the coverage and anticipation around the Democratic primary, it is easy to miss that Republican voters will also be heading to the polls on Tuesday. In actuality Weld is one of more than 15 Republicans appearing on the New Hampshire ballot.

Why run against Trump?

“I think Mr. Trump is a danger to the health of our democracy, and I felt that someone needed to plant a flag. He couldn't be unchallenged,” Weld said. “That would embolden him even further.”

Zoltan Istvan, Matt Matern and Joe Walsh — who dropped out of the race Feb. 7, but was in the running at the time this story was reported — all echoed Weld’s assertion that Trump needs to be challenged, and they cited that as one of the reasons they are on the primary ballot.

“I felt it was important for a Republican to take a stand against Trump,” Walsh, a former Illinois congressman, said.

Matern, a lawyer from California, said he acknowledges the fact that his campaign is an uphill battle, but he has spoken to a lot of Republicans who are unhappy with Trump’s presidency. He said he hopes to be an option for those voters.

“I think the main purpose is to send a message to President Trump and the Republican Party at large that there are a lot of dissatisfied voters,” he said.

Istvan, an ex-journalist and former California gubernatorial candidate, also acknowledged that it is unlikely he will win the Republican primary.

Weld said that he has never been shy about the fact that he does not agree with every aspect of the national Republican platform, and he is glad he can provide voters with a different option.

“I’ve referred to myself as a Libertarian, and I do to this day,” he said, adding that he doesn’t agree with the national Republican Party on most social issues. Weld is pro-marriage equality, pro-choice, and he is for the legalization of marijuana.

In addition, Weld advocates for more stringent environmental protections, and he said that New Hampshire voters in particular seem to agree with him on that front.

“They do think the risk of catastrophic weather is a real risk, and I strongly agree with that,” he said. Weld said that if he were president, he would put a fee on carbon emissions.

Istvan and Matern join Weld on the list of Republican challengers to Trump pitching themselves as radically different than Trump when it comes to certain policies. While they hope to woo Trump’s base, they said that they hope to appeal to more voters than just Trump supporters.

Matern, like Weld, argues for more environmental protection and views climate change as a great risk.

“Younger voters are more and more concerned about the environment. They see Australia is on fire,” Matern said, noting that his views on conservation and environmental protection are drastically different than Trump’s views on those topics.

Istvan also suggests some bold ideas that are bound to be controversial among conservatives. Like Weld, he pitches himself as a fiscally conservative, socially liberal Republican, but Istvan also advocates for “universal basic income,” where every American would receive $1,000 per month from the government.

“Monetize these federal lands, and we might be able to deal with poverty,” he said. “It doesn't raise taxes a dime.”

While Matern and Weld propose adding federal protections to the environment, Istvan recommends continuing Trump’s policies of allowing protected lands to be drilled and mined for natural resources, but rather than the money going towards big companies, the money would hypothetically go back to the voters.

Weld said that Republican voters in New Hampshire do seem to be divided by Trump in some ways.

“The normal people that I meet on the street and in diners, at fairs and parades, no they're not swinging obediently to Mr. Trump at all,” he said, adding that Republicans in Washington are “slavishly obedient” to the president. “Some of them are Trump supporters, but everybody in New Hampshire is decent about these things. It's not like Washington.”

Weld, Matern and Istvan have all spent time campaigning in New Hampshire, and they said that New Hampshire residents are unique.

Clara Monier, a lifelong Republican and the co-chair of Weld’s New Hampshire campaign, said she started campaigning for Weld this past summer when she saw him speak at a town hall event for candidates to speak on a variety of issues.

“I was a never a Trumper from the beginning,” she said, “but I figured I had to pick a candidate.”

She said Weld stood out to her as someone who exemplifies traditional Republican values.

“I feel I'm doing the right thing in voting my principle, not popularity, not the guy who I think is going to win,” she said. "And I've stuck with Weld ever since. He really, to me, embodies what Republicans should be about.”

Monier said she hopes Weld does well in the primary season, but if he is not chosen to be the Republican nominee, she will vote for “whoever she has the least objection to.” She said she hopes Trump’s democratic rival would be Amy Klobuchar or Joe Biden.

'He does have a chance'

After greeting voters at the Derry diner, Weld headed to Rockingham Brewing Company in Derry for a town hall. He traded the neon lights and rockabilly memorabilia of MaryAnn’s for the dimly lit, industrial-style brewery and spoke to a small but enthusiastic crowd of about 30 people who donned Weld 2020 buttons. Periodically, the crowd interrupted Weld's speech with thunderous applause.

Weld spoke about unity between the parties, individual freedoms, and reducing the national debt. He took questions from the crowd about topics ranging from affordable housing to the Evangelical right.

Kerrie Stamp, a Weld campaign volunteer from Windham who attended the town hall, said she is hopeful about Weld’s chances Tuesday.

“I think there is a strong undercurrent that we are not aware of. I really feel that he does have a chance,” she said.