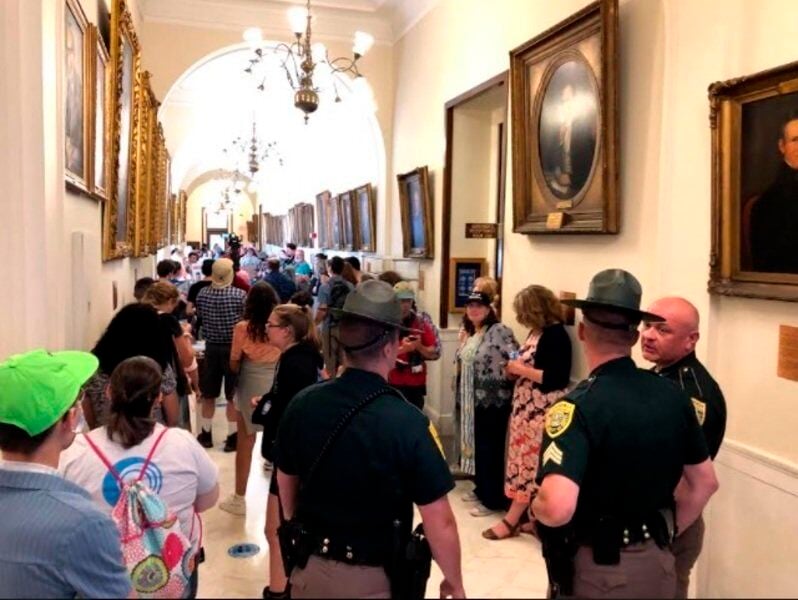 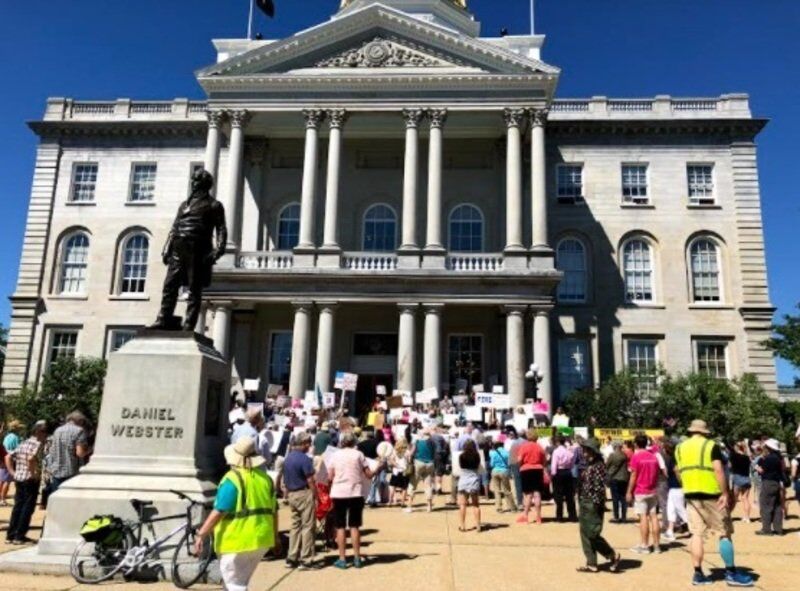 Paula Tracy photo Protesters gathered Thursday outside the Statehouse in Concord to oppose the state budget.

Paula Tracy photo Protesters gathered Thursday outside the Statehouse in Concord to oppose the state budget.

The protesters mostly left peacefully singing, “We shall overcome,” about 15 minutes after police arrived. Joe Burke, head of security for the recently reopened building, called state police as backup after telling organizers who were chanting, beating drums, and screaming that the noise was disrupting the course of “the people’s business.”

In Representatives Hall, the Senate was in session for the last time of the session after passing the state budget bills. The House was also meeting at the Sportsplex in Bedford.

In spite of the noise outside the governor’s office and that of the secretary of state, it was not so noisy that the Senate could not conduct business.

Many who came to the 10 a.m. protest on the steps were opposed to nonfinancial provisions inserted in the $13.5 billion budget, including measures that limit abortion and free speech.

Sununu has said publicly he supports the Republican-backed plan and that he will not veto all of the tax cuts included in it to oppose such things as a late-term abortion ban or language surrounding the teaching related to racism and sexism.

James McKim, president of the Manchester chapter of the NAACP, said at the rally that aspects of this budget are being driven by a national agenda of right-wing groups and that the eyes of the nation are upon New Hampshire.

He led chants that included: “Vote them out” and “We will stop them!”

Anthony Harris, who is black, spoke about the language that would ban teachers in New Hampshire from discussing divisive concepts in the classroom related to racism and sexism.

Compromise language was inserted in its place. In an op-ed piece by Republican Sens. Chuck Morse and Jeb Bradley, they wrote “we strengthen our state’s anti-discrimination laws to ensure that no one is considered inferior, superior, or oppressive because of their inherent characteristics. Using the framework of our existing anti-discrimination laws, we have given parents and public employees a legal recourse should they face such discriminatory concepts in their schools or public workspaces,” it reads.

Harris said, “We need to speak about racism,” noting “we are not holding you accountable for your ancestors.”

Asma Elhuni, of Rights and Democracy NH, said implicit bias if left without discussion, will keep all of us oppressed.

Pro-choice activists decried the language in the budget which would require ultrasounds before all abortions, forcing patients to a medically unnecessary procedure. The proposed budget would prohibit abortions in the seventh, eighth and ninth months of pregnancy and only makes exceptions in the case of saving the life of the mother.

The measure also would make it a felony offense for doctors to perform such abortions.

Andru Volinsky, the former executive councilor, Democratic candidate for governor, and lead attorney in the Claremont school funding case, said this budget bill includes vouchers for private schools and a corresponding cut to public education with upwards of $100 million diverted from public schools.

“We are probably going to lose today,” Volinsky said of the budget compromise and likely signing by the governor.

“Our job is to remember,” Volinsky said. “Then, when we win back the ‘people’s house’ we need to do something.”

“We need to talk about how we raise money,” Volinsky said, “We need to have this discussion.”

“The wealthy use loopholes and lobbyists to get off scot-free,” she said. The governor said there are tax cuts for everyone but that is not true, she said.

We give out-of-state corporations a break, she said, and tax cuts for the wealthiest.

“It’s immoral and it hurts all of us,” Fogarty said of the budget.

Several high school students spoke including ones from Bow and Bedford.

“I am damn sick and tired of budgets that don’t address the needs of the people,” said the Rev. John Gregory Davis, of the Meriden Congregational Church UCC.

Members of the climate change community also came to decry a lack of funding in the proposed budget to deal with the impacts of global warming.

Barbara Reed of North Swanzey got to the Statehouse early enough to get the handicapped parking spot on Park Street, and wheeled herself and her large protest sign to a spot where state Senators had to pass by her to vote on Thursday.

She said she intentionally wore blue, her favorite color, and used blue and red ink to make her sign, protesting the proposed $13.5 billion biennial budget.

“When they can’t pass a bill as a stand-alone bill, they hide it in the budget,” Reed said noting her concern was not so much the actual dollars and allocations but social change that has been added in particularly related to education and abortion.