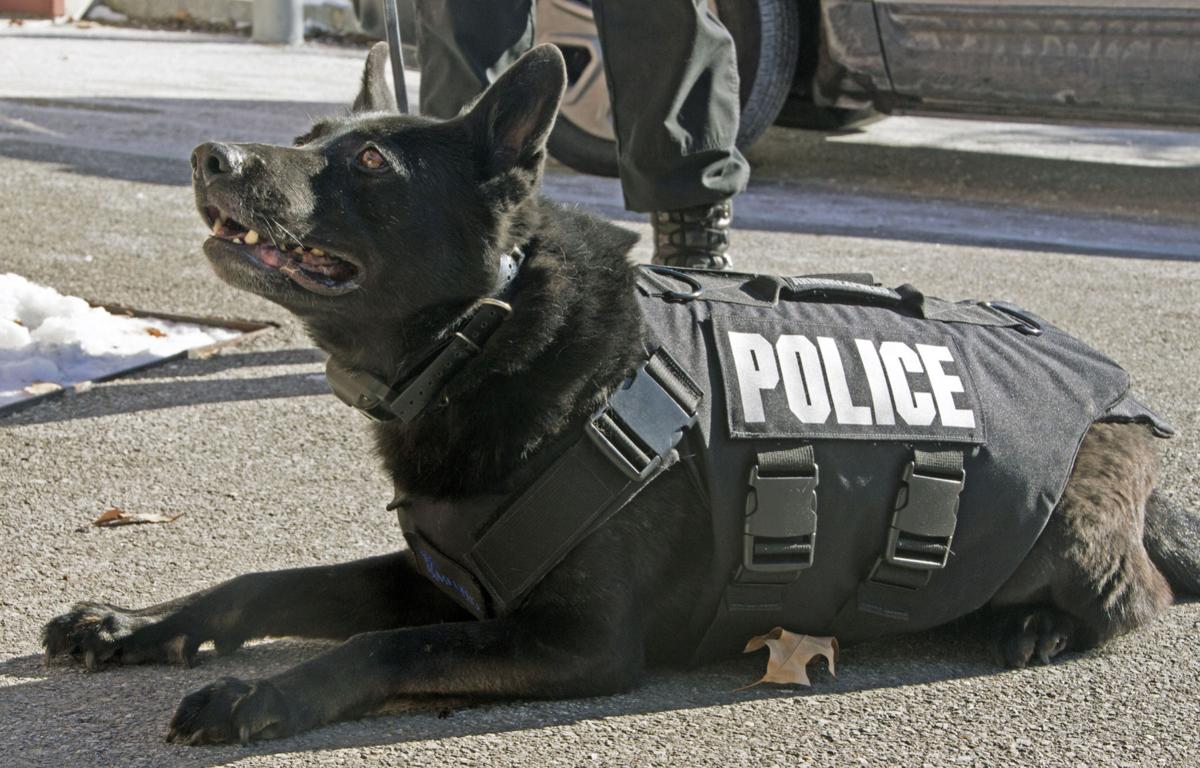 Mingo's primary job as a police dog is to search, whether it be for drugs, missing persons, or suspects. 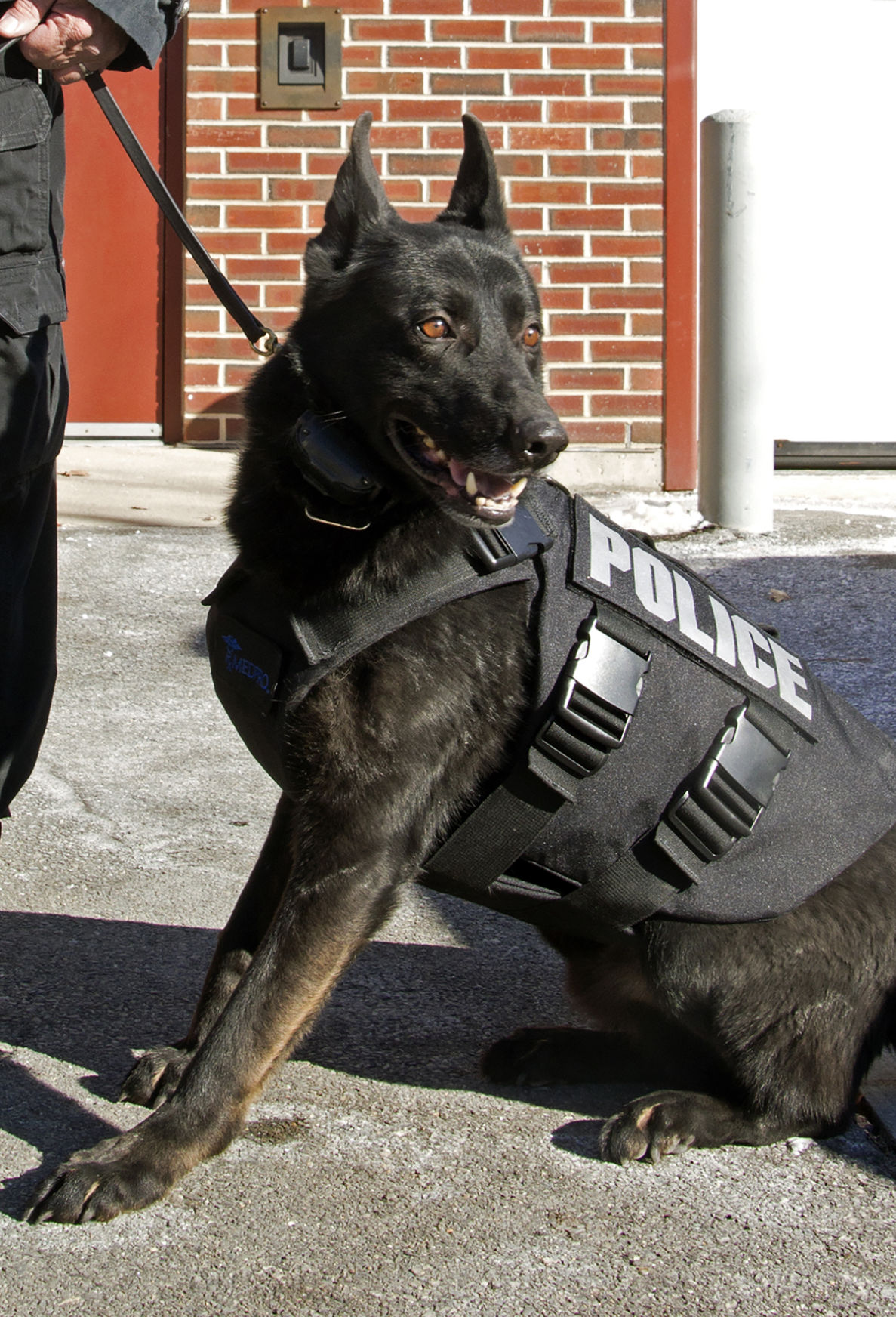 Mingo has been with the Londonderry Police Department since February of 2010. 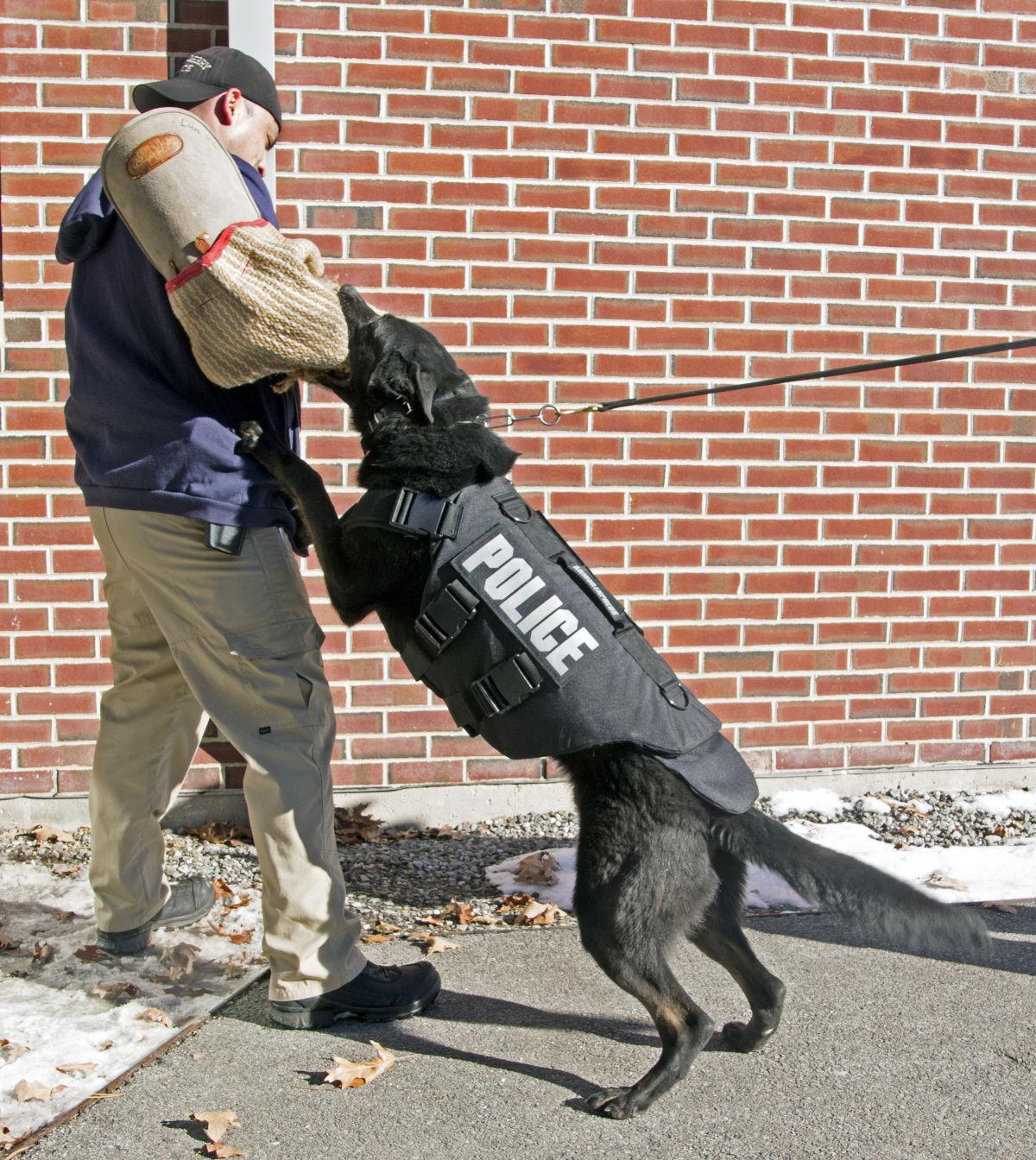 Mingo, at the direction of Officer John Perry, practices a bite on Officer Andre Uy. 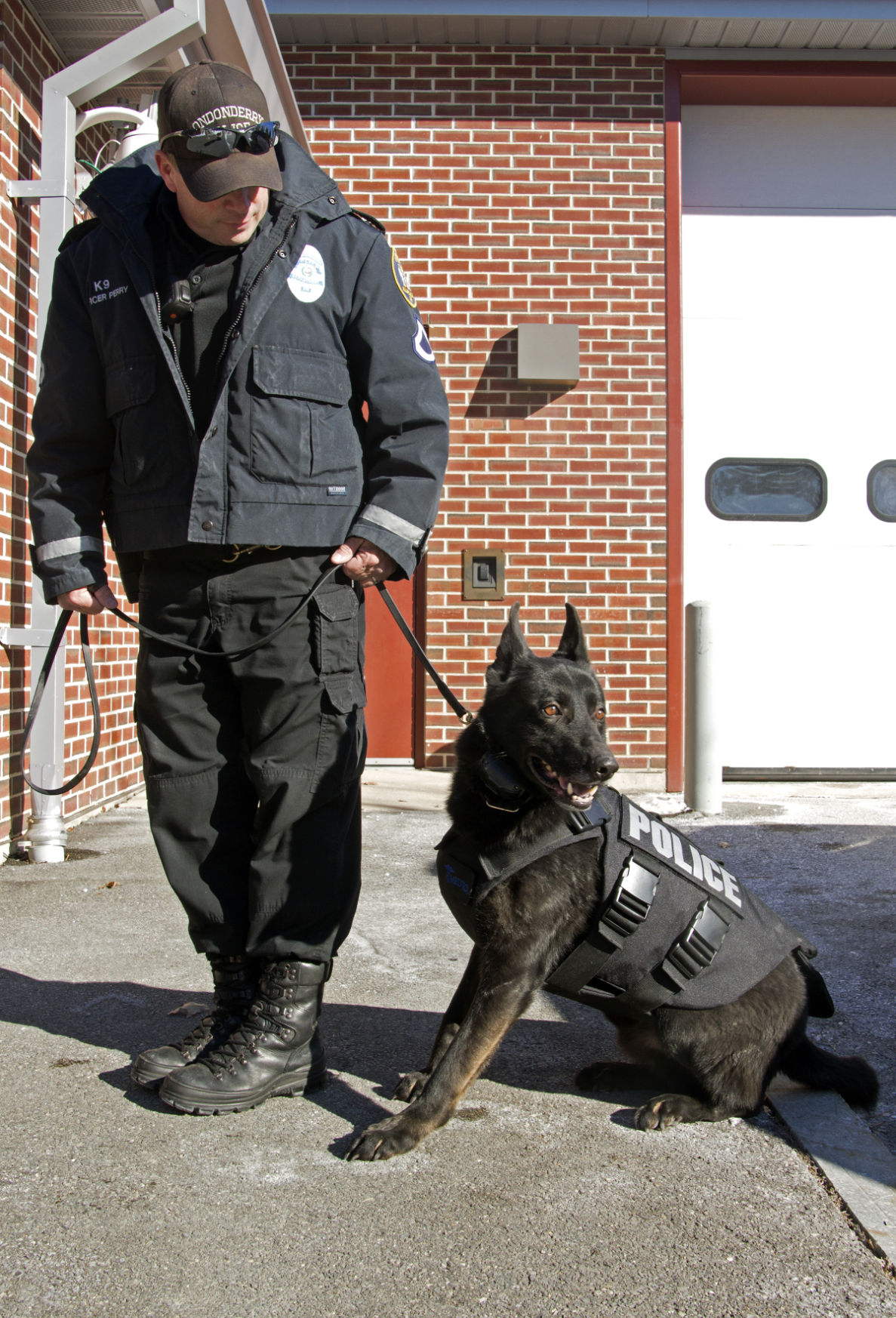 Officer John Perry commands his K-9, Mingo, to heel outside the police department.

Mingo's primary job as a police dog is to search, whether it be for drugs, missing persons, or suspects.

Mingo has been with the Londonderry Police Department since February of 2010.

Mingo, at the direction of Officer John Perry, practices a bite on Officer Andre Uy.

Officer John Perry commands his K-9, Mingo, to heel outside the police department.

This town’s smallest crime fighter is less than 3 feet tall and weighs just 63 pounds, but he’s agile, strong and lives to serve the police department.

Mingo is a 7-year-old German shepherd and the Londonderry Police Department’s resident K-9. Some of his key achievements include finding 20 pounds of hashish inside a raft shipped from California to Keene and locating suspects like Jacquelyn Laurence, the woman accused of biting a man’s lip off, who hid in freezing water underneath a culvert until Mingo caught her scent.

Wednesday, Mingo became the beneficiary of a brand-new bulletproof, stab-proof vest — a donation more than a year in the works from the Manchester-based pharmaceutical consulting company RxMedPro.

The company formed the idea of giving back to the community by helping animals in 2014, the same year it was founded, said Director of Pharmacy Operations and Managing Partner Charles Doucette of Londonderry. Upon learning the department in his own town was in need of a new K-9 vest, Doucette said he knew he wanted to replace it.

Conversations began between Doucette’s company and the police in early 2015, and a year later, the finished product — an approximately $1,200 vest custom fit for Mingo — finally arrived.

“Knowing more of what goes into their day-to-day operations, they (police dogs) are absolutely put in harm’s way and obviously, the protection of life is a very precious thing,” Doucette said. “Mingo is the first line of defense for the K-9 team and Officer Perry, and he deserves to have his life protected at any cost.”

Officer John Perry, an 18-year veteran of the department, has been a K-9 handler for nearly 15 years. His first K-9, Zip, died not long after he retired in 2010, shortly after Mingo’s arrival. Perry still wears a small locket of Zip’s ashes around his neck.

Perry trained with both dogs from the time they were about 18 months old, forging a bond that enables the two to work together seamlessly.

“We ask them to do some pretty dangerous and pretty nasty things. We ask them to do the things we can’t do. And they do it,” Perry said. “That dog lives to please me. It’s actually humbling.”

Mingo’s new vest will allow him to continue aiding Perry and the rest of the department more safely. While he won’t always wear it — Perry said it could cause him to overheat or get snagged in tight spaces — the new vest will fit Mingo better and protect him from bullets and sharp objects when searching a building or tracking an armed suspect.

The old vest was designed to fit a dog the size of Zip, who was bigger than Mingo. It was also far past its due date for replacement, approximately five years after purchase, lacked protection for the dog’s sternum, and was not stab-resistant.

Emblazoned on the new vest is the word “police” in bold white letters, as is RXMedPro’s company logo in small blue font on the breast plate, “to remind Officer Perry that we are there and willing and able to help him in any way we can,” said Doucette, who offered to cover the cost of repairs to the vest after its three-year warranty expires.

Mingo isn’t the only recipient of RxMedPro’s help. The company has also played benefactor to the Lowell Humane Society, where Doucette got his own pup, Lucy, and plans to donate 5 percent of profits made in 2016 to nonprofits or charities that benefit research and relief for diseases like Alzheimer’s, cancer and HIV/AIDS.

“As an entrepreneur, I’ve had a handful of different business ventures,” Doucette said, adding that he built each from the ground up without the aid of loans or investors. “It wasn’t that I wouldn’t have liked the help, it’s more along the lines that there was nobody to offer the help. ... Because there wasn’t anybody to give to me, I feel I have to give back to somebody else.”

Ray Bellia, the owner of Body Armor Outlet in Salem, expressed disbelief when Doucette came in late last year to order the vest.

“I was really surprised — it’s not like it’s an inexpensive item,” Bellia said. “It’s good to see that (giving back) is still out there, you know?”

RxMedPro is also in the process of developing its own K-9 program, with dogs trained in narcotics detection that will be subcontracted to law enforcement agencies or other groups as they’re needed.

“Narcotics diversion has increased drastically over the last three years, especially in the New Hampshire area with the heroin and opiate (crisis) that’s going on. There’s definitely a need for a service outside of law enforcement,” Doucette said.

In the meantime, Mingo will keep patrolling Londonderry and surrounding towns like Derry, Hudson, Pelham and Windham until his retirement in August of 2017.

“The dogs aren’t bullet catchers — we don’t send them up against guys with guns,” Perry said, but “We ask police dogs to do the things that we can’t do, and we would be doing them a disservice if we didn’t give them every opportunity to come out of it alive and successful.”