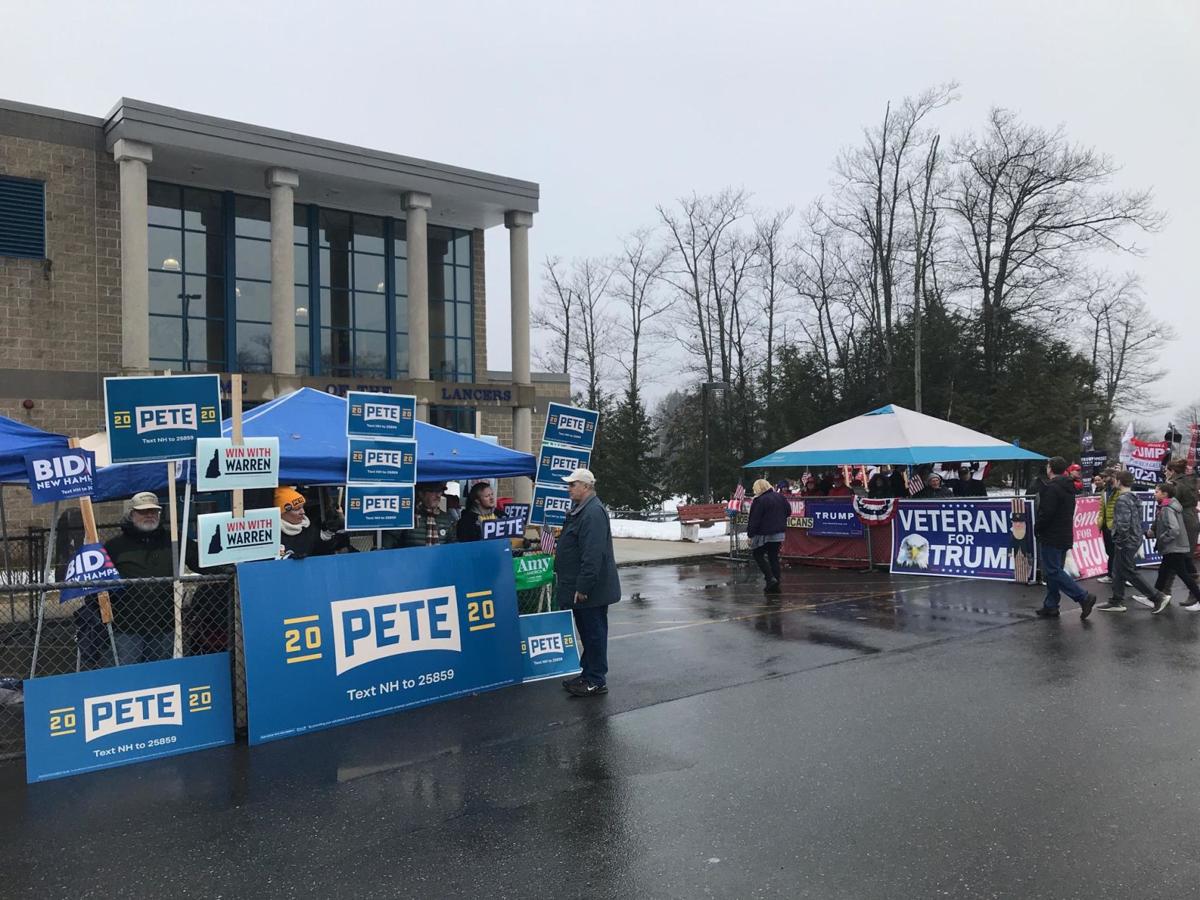 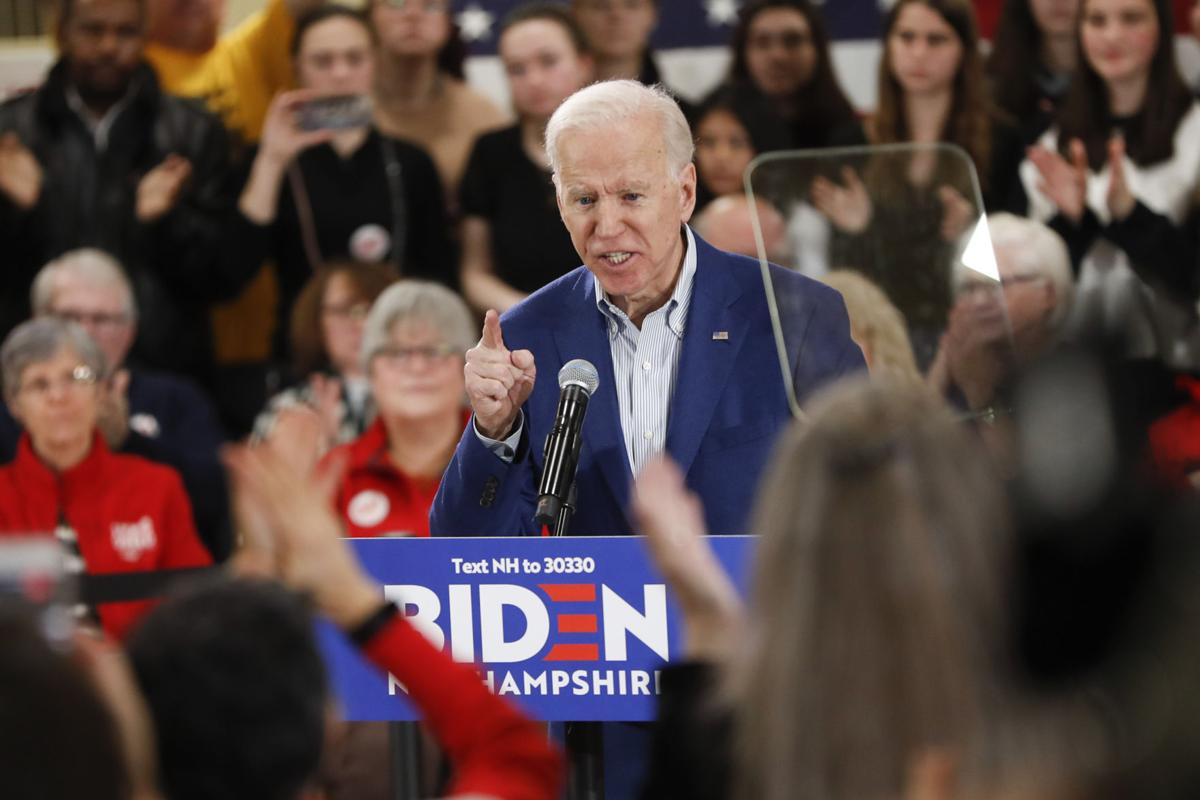 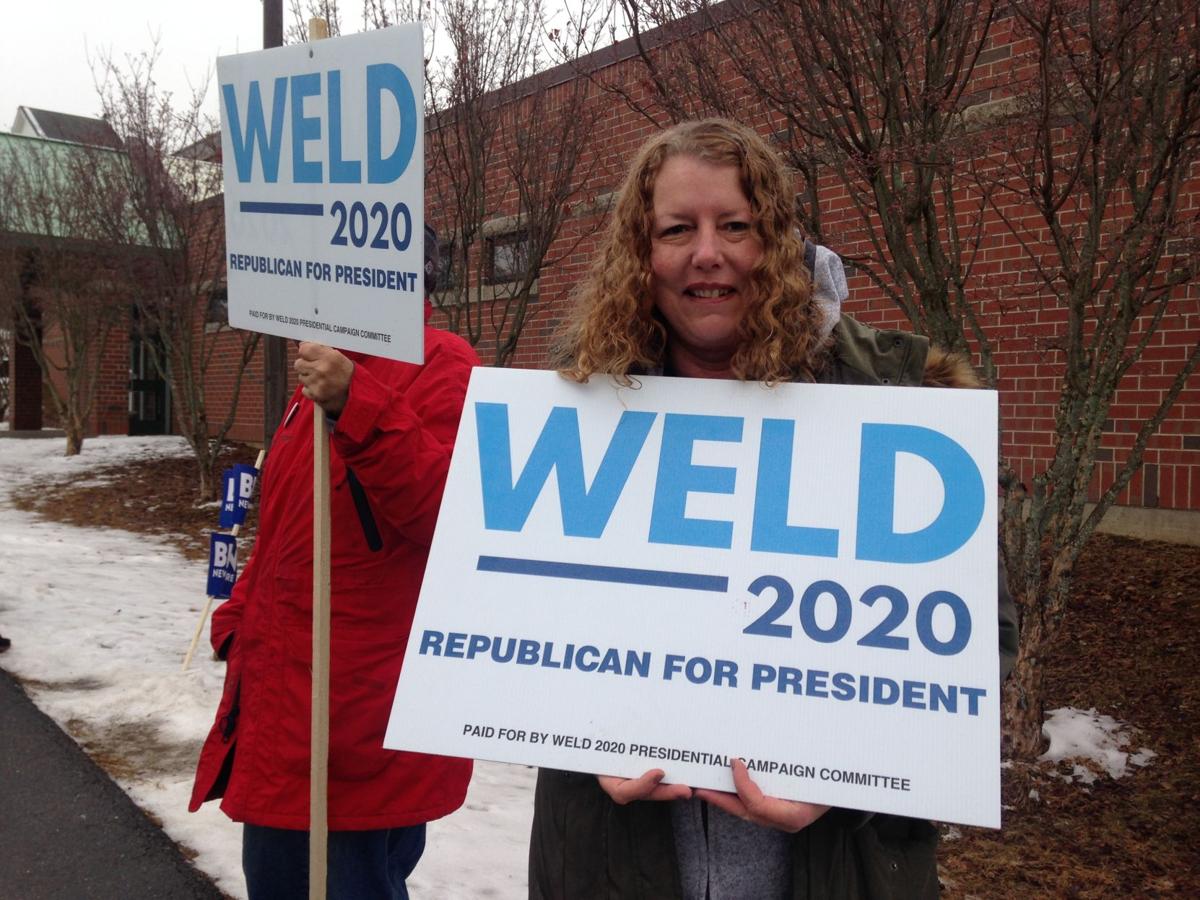 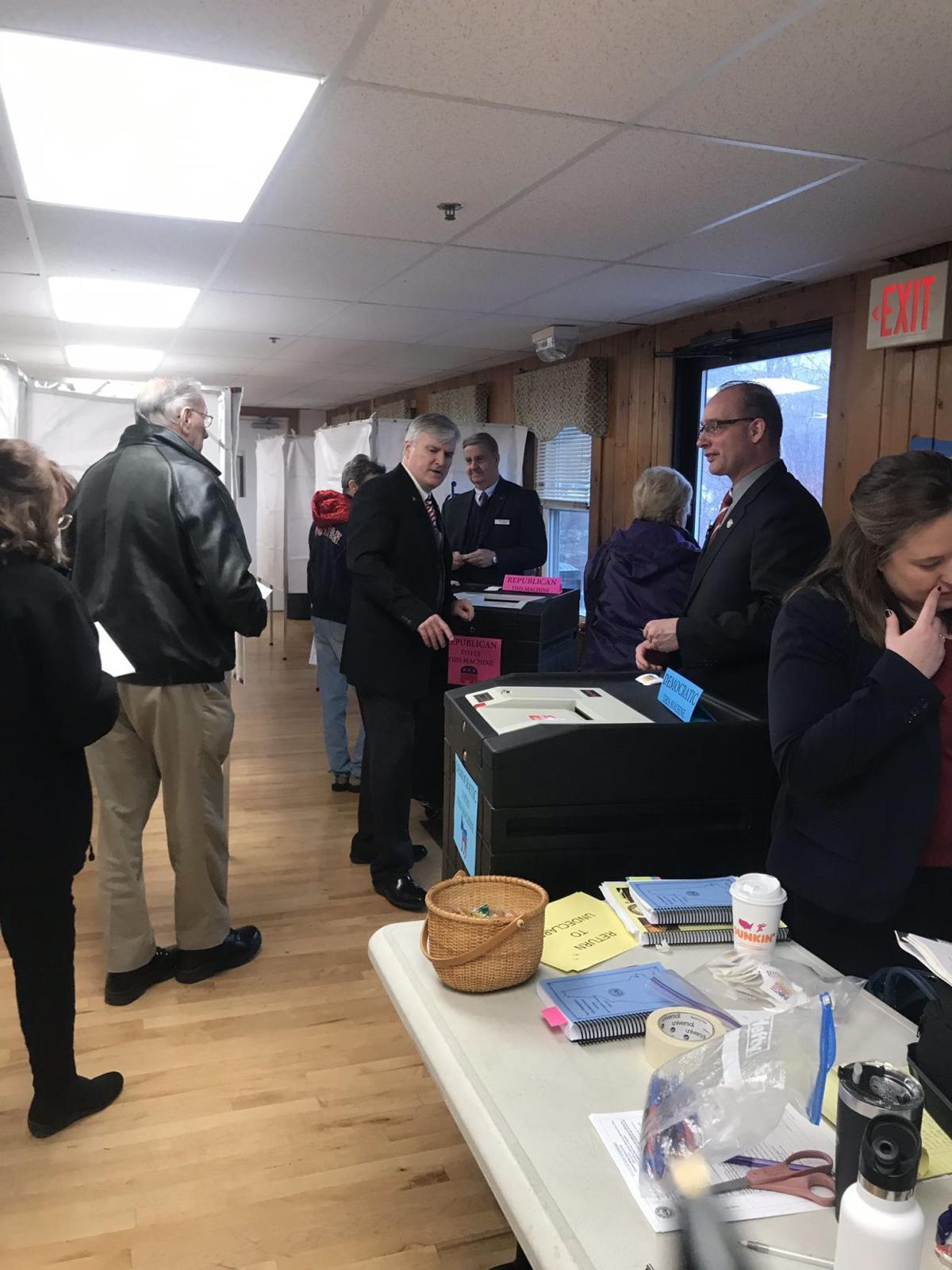 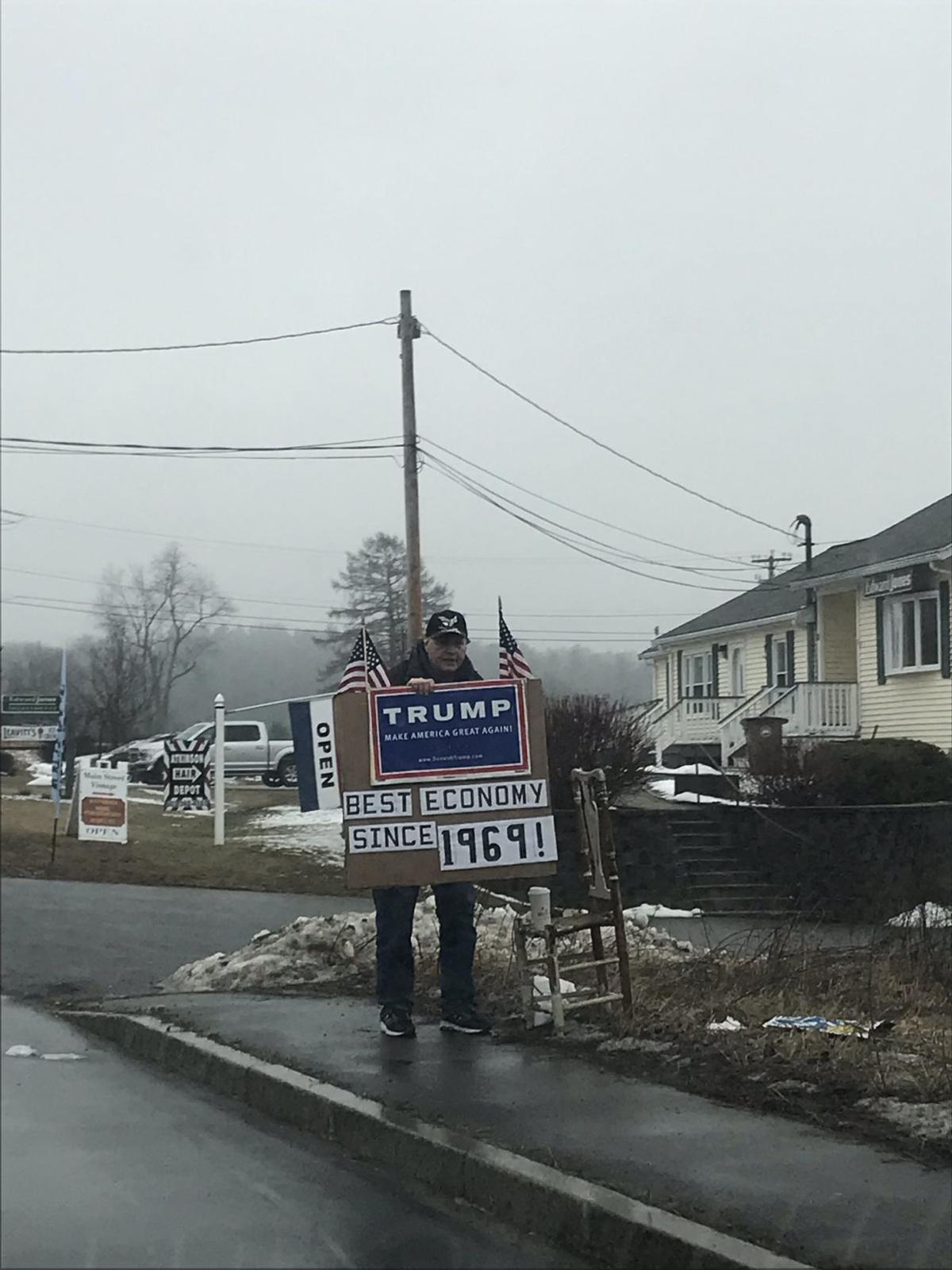 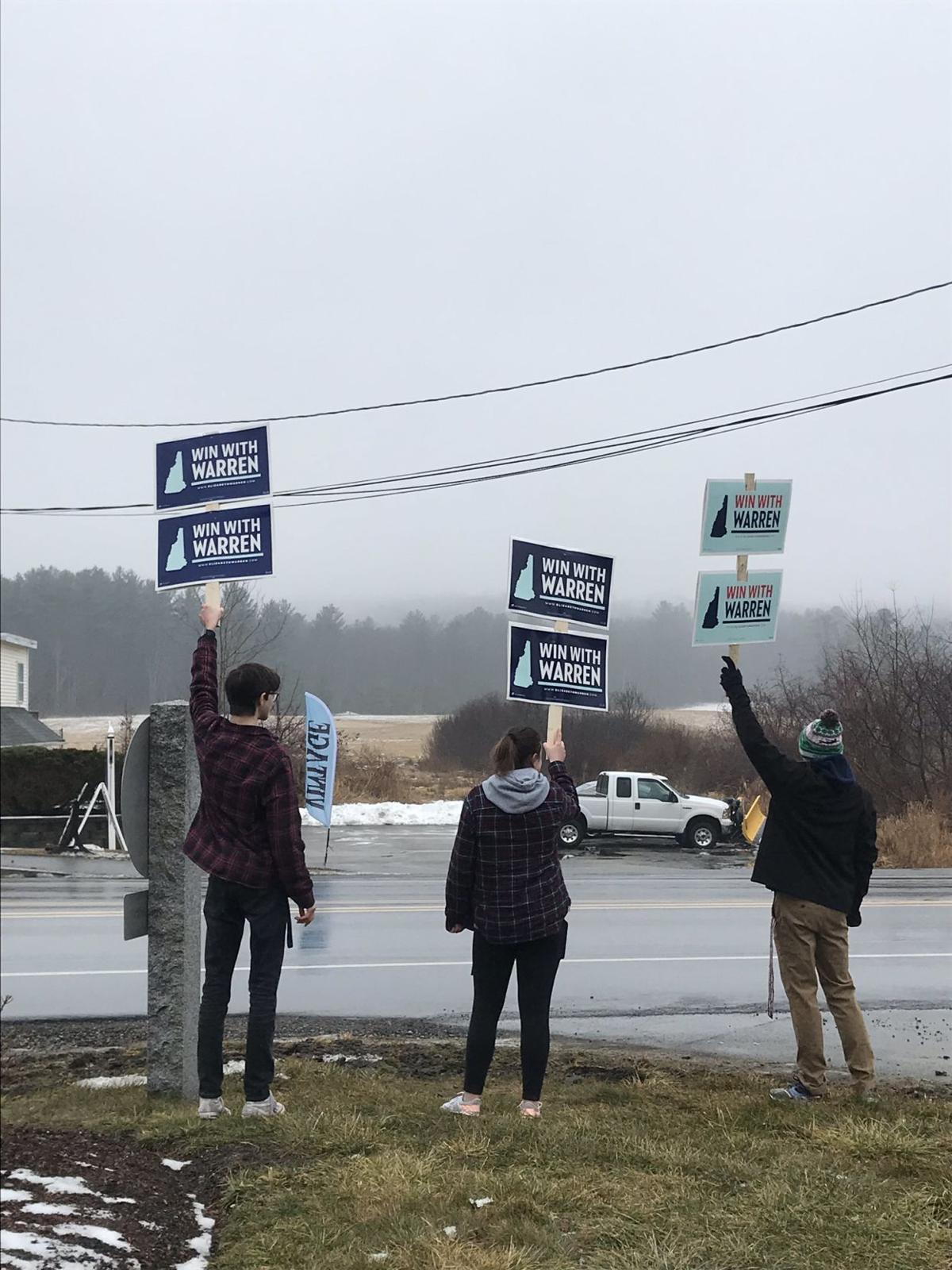 Breanna Edelstein/Staff photo. They're too young to vote, but these Timberlane students wanted to get in on the action in Plaistow. 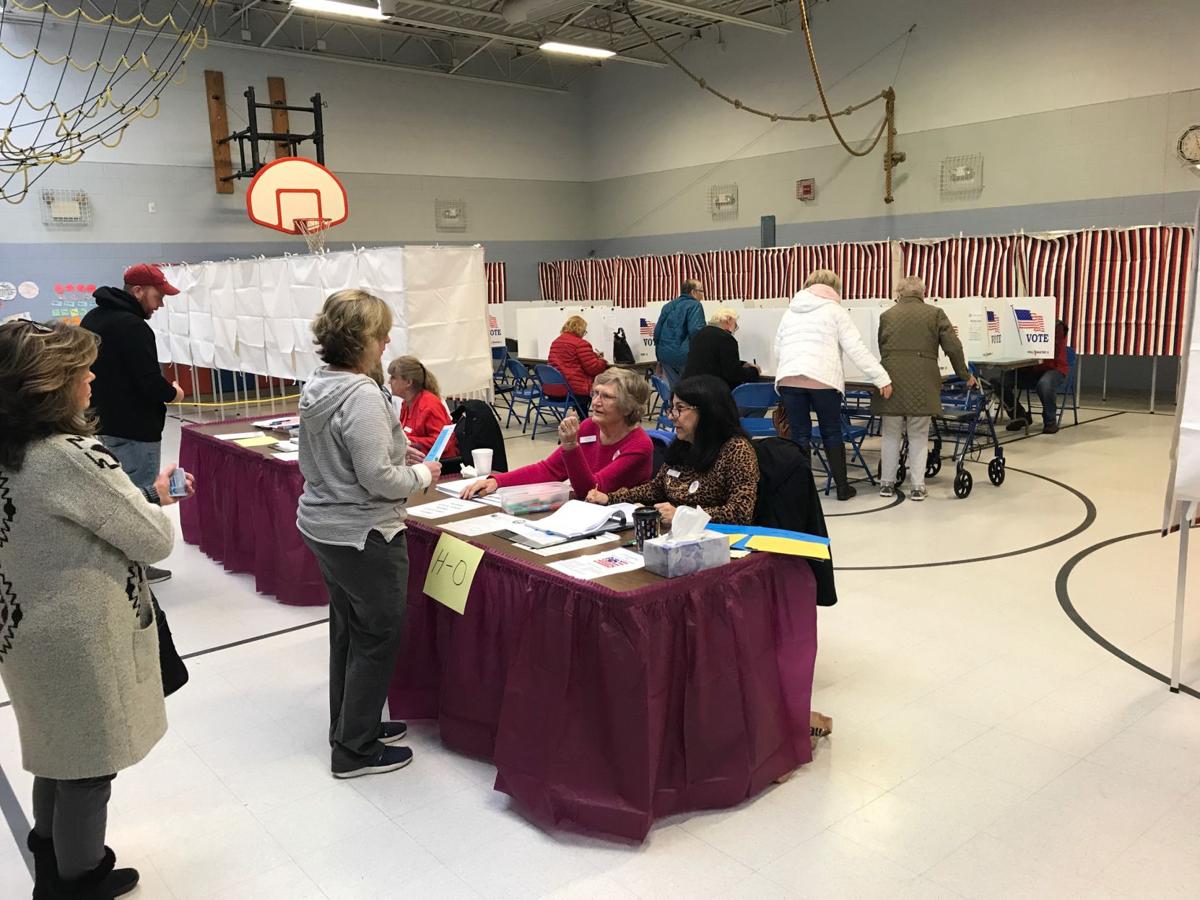 Tim Jean/Staff photo. Voters cast ballots at Pollard School in Salem. It was a slow start at the polls this morning. 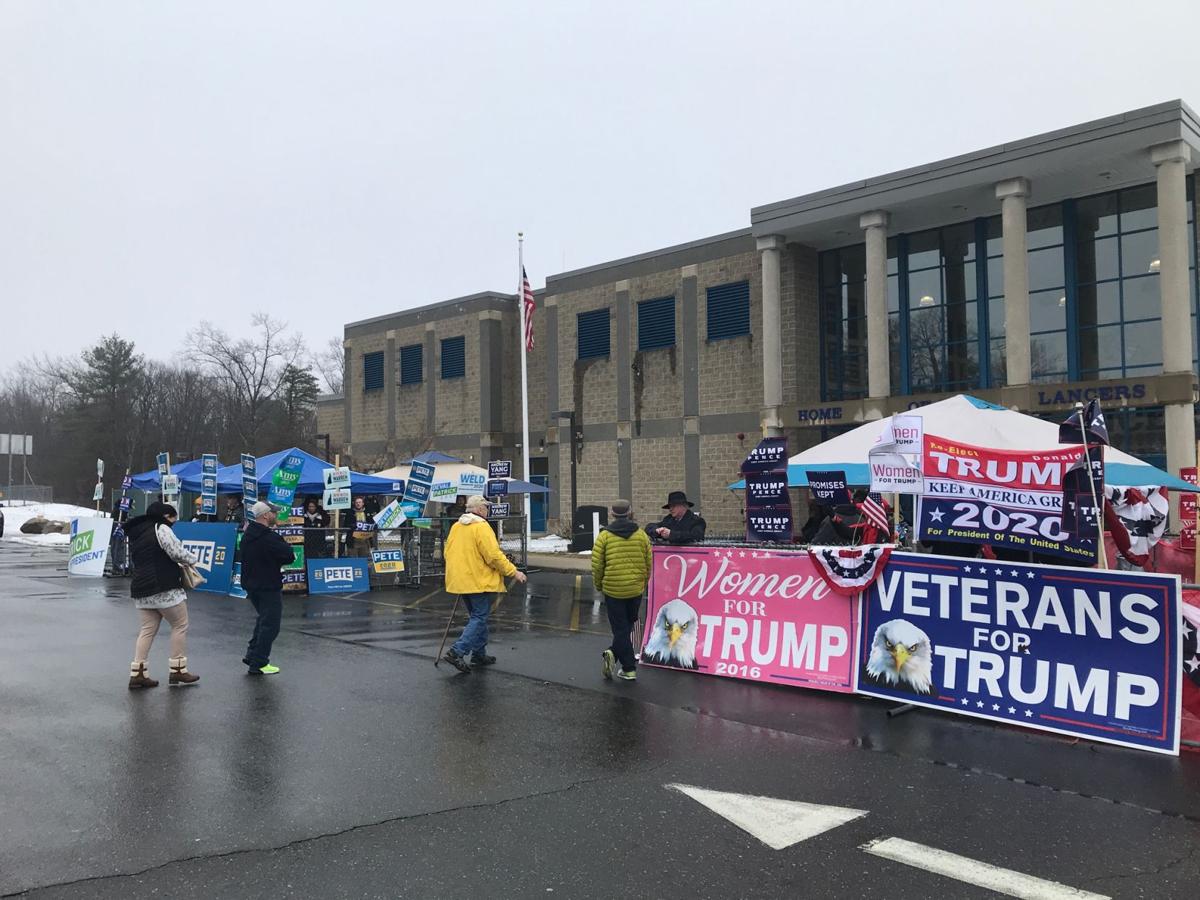 Breanna Edelstein/Staff photo. They're too young to vote, but these Timberlane students wanted to get in on the action in Plaistow.

Tim Jean/Staff photo. Voters cast ballots at Pollard School in Salem. It was a slow start at the polls this morning.

New Hampshire voters — and even those too young to vote — are heading to polling places for the first-in-the-nation New Hampshire primary today.

Reporters Breanna Edelstein and Julie Huss, along with photographer Tim Jean, are touring the region, gathering commentary and color.

Bernie Sanders speaks to his supporters around 11 p.m.

He thanks the people of New Hampshire "for a great victory tonight" and the thousands of volunteers who knocked on doors.

"This victory here is the beginning of the end for Donald Trump,” Sanders said. Then crowd erupts into "Bernie beats Trump" chants.

Sanders then thanked the other candidates for running great campaigns.

"No matter who wins ... we are going to unite together to defeat the most dangerous president in the history of the U.S.,” he said. — MH

“I admired Senator Sanders when I was a high school student, and I want to congratulate him on his strong showing tonight” #NHprimary2020 pic.twitter.com/NqJ80t2Hs9

Crowd cheers as they appear on a CNN live shot and Sanders pulls further ahead #NHprimary2020 #BernieForNH pic.twitter.com/16s03w5vCA

VoteCast: An overwhelming share of voters in New Hampshire’s Democratic primary — nearly 8 in 10 — view the economy as unfair. — AP

With 39% of precincts reporting, according to the Associated Press:

“It was the first time I heard him talk about attracting future former Republicans,” Bob Boonstra, 68 of Derry, said about when he became a @PeteButtigieg supporter. #NHPrimary2020 #FITN

Colorado Sen. Michael Bennet has dropped out of the race.

Paul Tennant is at Amy Klobuchar's headquarters in Concord, New Hampshire. He said about 200 to 300 people are there. The candidate hasn't spoken yet, but is expected soon.

Crowd cheers more as Sanders pulls further ahead. 22% of precincts are reporting #NHprimary2020

With 14% of precincts reporting, according to the Associated Press:

With 11% of precincts reporting, according to the Associated Press:

Democrat Andrew Yang, whose buzzy 2020 campaign promoted a freedom dividend of $1,000 a month for all adults, ends presidential bid. — AP

Trump was declared the winner as polls in the state closed Tuesday night.

Four years ago, the state offered Trump his first primary victory and helped catapult him to the White House. But Trump narrowly lost New Hampshire to Democrat Hillary Clinton in the November general election.

Trump has benefited from strong support from the Republican Party since then, and his campaign has worked to seize control of the nominating process to turn August’s GOP convention into a “four-day infomercial” for his campaign.

The president held a rally in Manchester on Monday night and deployed surrogates throughout the state Tuesday. It was an effort both to energize supporters and to do a test-run of the campaign’s organizing efforts for November. New Hampshire is viewed as the most likely Clinton state to swing toward Trump. — AP

Jeanne and Paul Frariza drove to #Manchester from Glastonbury, Conn. for tonight’s @ewarren #NHprimary2020 rally and are first in line. “We like Elizabeth’s strength, intelligence and competence. She’s the right person for the job — a change of venue.” @EagleTrib

Autumn Hood, who is 14 and attends a boarding school in Mass., is missing school tomorrow so she can be here with her mom Melissa Spencer to hear @PeteButtigieg speak. Both Hood and her mom have been active in Buttigieg's campaign. #FITNPrimary pic.twitter.com/LrPZWUmmpF

Salem Moderator Chris Goodnow says turnout is looking better this evening, as compared to this morning.

“It’s been very very smooth. This morning was light, but it’s been steady since about midday.” — MH

I’ll be with #TeamWarren in #Manchester tonight as votes are tallied. Follow along @EagleTrib as we cover #NHprimary2020 #FITN https://t.co/XydOzLtQZT

I’m headed over to @BernieSanders election night event in Manchester. Follow along as we await results from #NHprimary2020. Polls start closing at 6pm. The last polls in the state are open till 8 pic.twitter.com/7l035aIRHg

I’m headed over to @BernieSanders election night event in Manchester. Follow along as we await results from #NHprimary2020. Polls start closing at 6pm. The last polls in the state are open till 8 pic.twitter.com/7l035aIRHg

Bernie Sanders hugged and shook hands with supporters outside a Manchester polling place as he awaited the results of the New Hampshire primary.

Sanders wouldn’t speculate as to whether he expects a “resounding” victory today, but said he’s hoping for a win. He didn’t comment on rival Joe Biden’s decision to essentially cede New Hampshire and travel to South Carolina later.

Sanders says he’s proud “that we have spoken to tens of thousands of people in New Hampshire.”

Supporters outside the polling place wished Sanders luck and said they were proud of him.

One of those voters was Linda Bouldin, 63, who just moved to New Hampshire where her daughter lives last year.

She voted for Sanders in the 2016 Texas primary.

“I never stopped loving him,” she said. — AP

As votes are counted in New Hampshire, former Vice President Joe Biden is shifting ahead to South Carolina, where success is critical to his campaign.

Biden's Democratic presidential campaign says he and his wife, Dr. Jill Biden, will travel to Columbia on Tuesday night for a “launch” party. U.S. Rep. Cedric Richmond is Biden's campaign co-chairman and had already been planning to attend the event.

The campaign says Biden will address supporters in New Hampshire via livestream while his sister, Valerie Biden Owens, will thank them in person.

Biden has a lot at stake in South Carolina, where he has led polling and has long relationships with the heavily black electorate. But other candidates including Vermont Sen. Bernie Sanders and billionaire Tom Steyer have been campaigning hard in the state.

Biden says in a release he plans to travel later in the week to Nevada, which holds its caucus vote later this month. — AP

It’s been a light morning so far at Mary Fisk Elementary in Salem, too, according to Assistant Town Moderator Don Sorcinelli.

There were 250 ballots cast here in the first hour.

Why not more? The weather is a huge factor, Sorcinelli said. — BE

“This is a pretty typical primary,” he said.

It was a lackluster morning at the Ingram Senior Center in Salem. Just 452 ballots have been cast since polls opened as of about 10:30.

“I don’t understand it at all. I don’t know where everyone is,” said Assistant Town Moderator Ellen Emerson.

Emerson has been involved at Salem’s polls for 31 years. She said she expected more, and has historically seen more, from Salem voters.

Outside there were only two supporters with signs — campaigning for  Buttigeig. — BE

Two juniors and a senior at Timberlane Regional High School were campaigning for Sen. Elizabeth Warren, D-Mass., in Plaistow.

They’re not old enough to vote, but they say they want to get others excited about this historic New Hampshire tradition. — BE