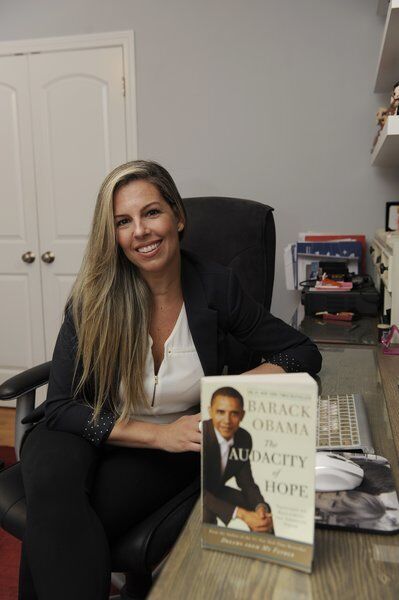 TIM JEAN/Staff photo. Windham's Alexandra Barker in her home workspace holds a copy of a book she had former President Barack Obama sign after she interviewed him for TV. 4/17/21 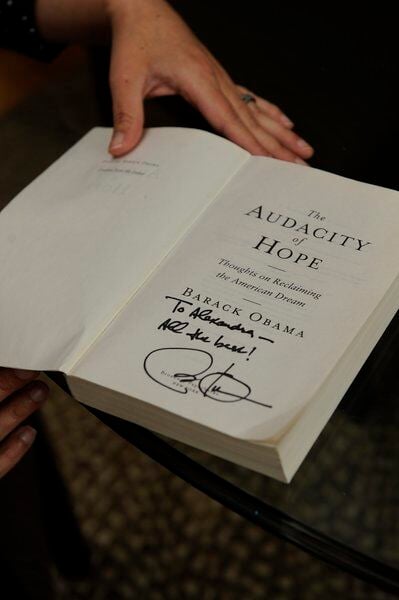 TIM JEAN/Staff photo Windham's Alexandra Barker shows a page in a book she had former President Barack Obama sign after interviewing him for TV. 4/17/21

TIM JEAN/Staff photo. Windham's Alexandra Barker in her home workspace holds a copy of a book she had former President Barack Obama sign after she interviewed him for TV. 4/17/21

TIM JEAN/Staff photo Windham's Alexandra Barker shows a page in a book she had former President Barack Obama sign after interviewing him for TV. 4/17/21

WINDHAM — It was the interview of a lifetime — not only for Alexandra Barker, but for her native Brazil.

In mid-November 2020 — seven months into a global pandemic — the Windham resident headed to Washington, D.C., to produce an international interview featuring former President Barack Obama in the wake of his new book release.

“Every news outlet in Brazil was talking about it the next day,” she recalls now.

Barker describes it as the first sit-down of its kind to be streamed to the Brazilian network that she and partner Rubinho Lima contribute to through their company, Atrium Productions.

Her decade in the business — balanced with a full-time job in communications — has ranged from covering newly landed astronauts at NASA’s Johnson Space Center in Houston, Texas, to the pool surfing world championship in a Western desert.

But for her, Obama was special.

Barker, now 40, came to the United States 18 years ago as an exchange student with plans to stay for only a year. She was a sports reporter back at home, she explains, and a chance to cover the 2004 Olympics hinged on her ability to learn English.

She thrived in her new environment — enough to follow through with a drastic idea.

“I went home, quit that job and decided to stay in the U.S. to see how that went,” Barker says. “I got a master’s degree here, I got the job I have now, and moved to Windham eight years ago for a good quality of life and good education.”

Her youngest son was a month old during the move, she says, and her oldest was 5.

“I’ve always admired (Obama). I became a citizen because of him,” Barker says. “When he was running for president the first time, I rushed to get citizenship because I wanted to vote.”

Obama continued to influence her career and life choices. He was important enough that when she learned of the interview opportunity, excitement was matched with worry.

“I got a little nervous that I was going to be disappointed,” she says. “You know, they say that about meeting your idols. When I’m in that position (around people of fame and with power), I try not to behave like a fan.”

That means there typically aren’t requests for photos and autographs.

“With celebrities and everyone really high level, we stay as invisible as we can,” she says, describing how she spent most of the Obama interview behind a camera monitor, directing angles.

Still, Barker was able to see for herself the dichotomy of the former president on camera and off. He breezed into the room, she says, warmly greeting everyone he saw.

“But when he sat in the (interview) chair, he really transformed into someone serious, presidential,” she says. “Very focused.”

Barker’s production role spans from early arrangements to set breakdown, she explains. Amid a pandemic, everything became more complicated — testing, quarantine, travel and pre-interview planning. She praises Obama’s team, who were crucial in the coordination, she says.

Obama’s trademark — extensive answers to each question — gave way to Barker’s favorite moments. When she had a little time to sit down by a monitor, put her elbows on her knees and watch. After 17 hours of preparing the interview room — with COVID-19 precautions and up to Secret Service’s standards — she sighed with relief.

“Once in a lifetime,” she says. “I was trying to take it in as much as I could. As soon as we were done, he switched back to casual. He interacted with us, and since everyone had been tested, he said we could take masks off for photos if we wanted.”

The small crew made an exception to their typical practice. Barker will cherish a photo of the two, but says that she did not tell him about his impact on her life in America.

“For me, he is just such a symbol of the opportunities I want my family to see,” she says. “He’s just that example of inclusivity.”