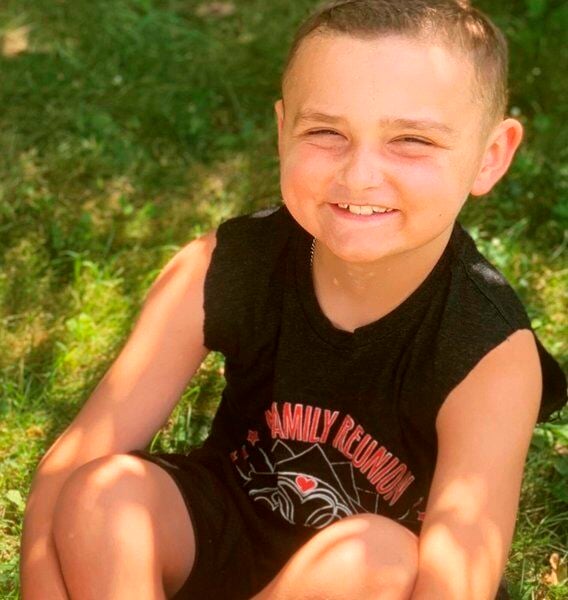 Courtesy photoGrady Smith, now 10, of Salem, New Hampshire, recently got to thank the stem cell donor who saved his life. 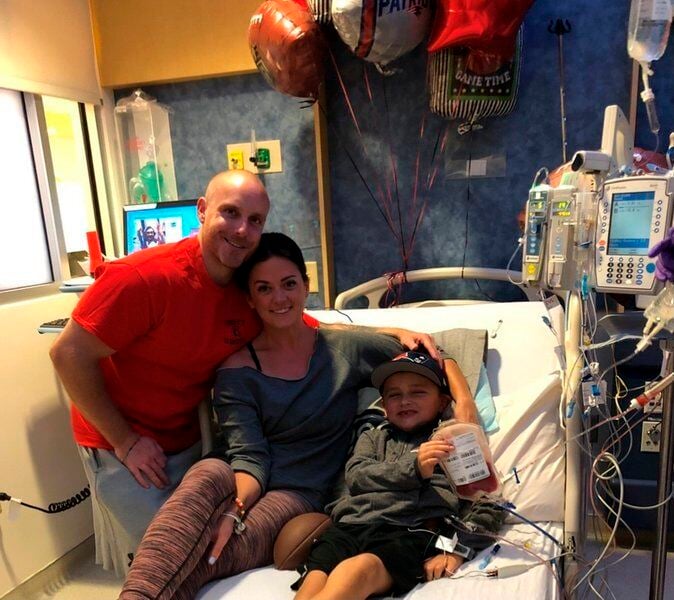 Courtesy photo. Grady Smith, 10, of Salem, New Hampshire, is shown here with his parents Jeff and Jillian Smith and a bag of donated stem cells.

Courtesy photoGrady Smith, now 10, of Salem, New Hampshire, recently got to thank the stem cell donor who saved his life.

Courtesy photo. Grady Smith, 10, of Salem, New Hampshire, is shown here with his parents Jeff and Jillian Smith and a bag of donated stem cells.

SALEM, N.H. — Grady Smith celebrated his 10th birthday Friday thanks to a 29-year-old Michigan woman who donated her stem cells.

The unlikely friends, who have exchanged some text messages since the successful 2018 transplant, planned to meet face-to-face at a September gala hosted by DKMS, the nonprofit organization that connected them.

The ongoing pandemic, however, indefinitely postponed the in-person event. Donors and recipients instead met virtually on video calls.

Two years after the life-saving procedure, Grady’s mom Jillian Smith had a hard time on that call — as she does in general — expressing her gratitude.

“She’s a hero. She saved his life. Grady literally would not be here today if it were not for her,” said Jillian. “There just aren’t any words for it.”

She and her husband, Methuen police officer Jeff Smith, learned of their boy’s diagnosis on a whim in August 2018.

“We noticed that over the course of two weeks he just kept saying ‘Huh?’ We’d have to repeat things. It was like he couldn’t hear us all of a sudden,” Jillian said. “His pediatrician knows I’m not an alarmist, so we were sent to an ear, nose and throat specialist.”

Despite a clean bill of health, Grady’s mom, who worked for 14 years in the emergency room at Holy Family Hospital in Methuen, wasn’t convinced her son was OK.

“We ended up at Boston Children’s Hospital and I told them I wasn’t leaving until they scanned him (a head MRI),” she said. “That’s when they found it. Three to six months later and he wouldn’t have had a chance for a transplant.”

The potentially deadly genetic disease found by Boston doctors is called adrenoleukodystrophy, or ALD. It affects 1 in 18,000 people, mostly boys and men.

The brain disorder destroys myelin, the protective covering surrounding nerve cells that control thinking and muscles. Experts say there is no cure for ALD. But stem cell transplants are said to help with its progression.

Grady’s hearing is fine today, Jillian explained, but he suffers from residual auditory processing issues from the lesion on his brain.

Despite the communication barriers, donor Jessica Carroll feels a one-of-a-kind connection with Grady, who at this point is mostly made up of her DNA after being treated with her stem cells.

A resident of Southfield, Michigan, Carroll found her way onto DKMS’ donor registry during college, six years ago.

It took seconds for the cheek swab to collect Carroll’s DNA, and four years before someone from the organization called to say she was a perfect match for a sick boy nearly 800 miles away — in New Hampshire.

“They told me to take a day to think about whether I actually wanted to donate,” she said. “I thought about it for all of five minutes.”

She reasoned, “Even though I was remodeling my house that I had just closed on four days prior, I emailed them back to say I was in. I knew I had to do this.”

“I understand in theory that I am ‘a hero,’” she said. “But all I did was help. Grady needed my help and I was there. That’s how I think of it.”

Carroll stresses how easy it is to join the registry, which she will remain on in the rare instance she ends up being a match for someone else. Because the pandemic has halted in-person registry drives, DKMS is mailing free collection kits to anyone interested.

Jillian remains on a mission to expand knowledge about ALD and mandate heel prick testing of babies in New Hampshire for the disease.

When the pandemic allows, they plan to welcome Carroll to their home.

"I just want to hug her," Jillian said. "And try again to explain how much what she did means to us."

For more information about DKMS and joining their donor registry, visit dkms.org.