SALEM, N.H. — Salem’s patrolmen, sergeants, and dispatchers have no confidence in Town Manager Chris Dillon to run the municipality, according to a unanimous union vote Monday.

In a letter to selectmen and citizens, the group details years of purported issues with Dillon, and requests that the four-year town manager be replaced at the end of his current contract in May 2022, or sooner.

The letter is signed on behalf of the union's 59 members. 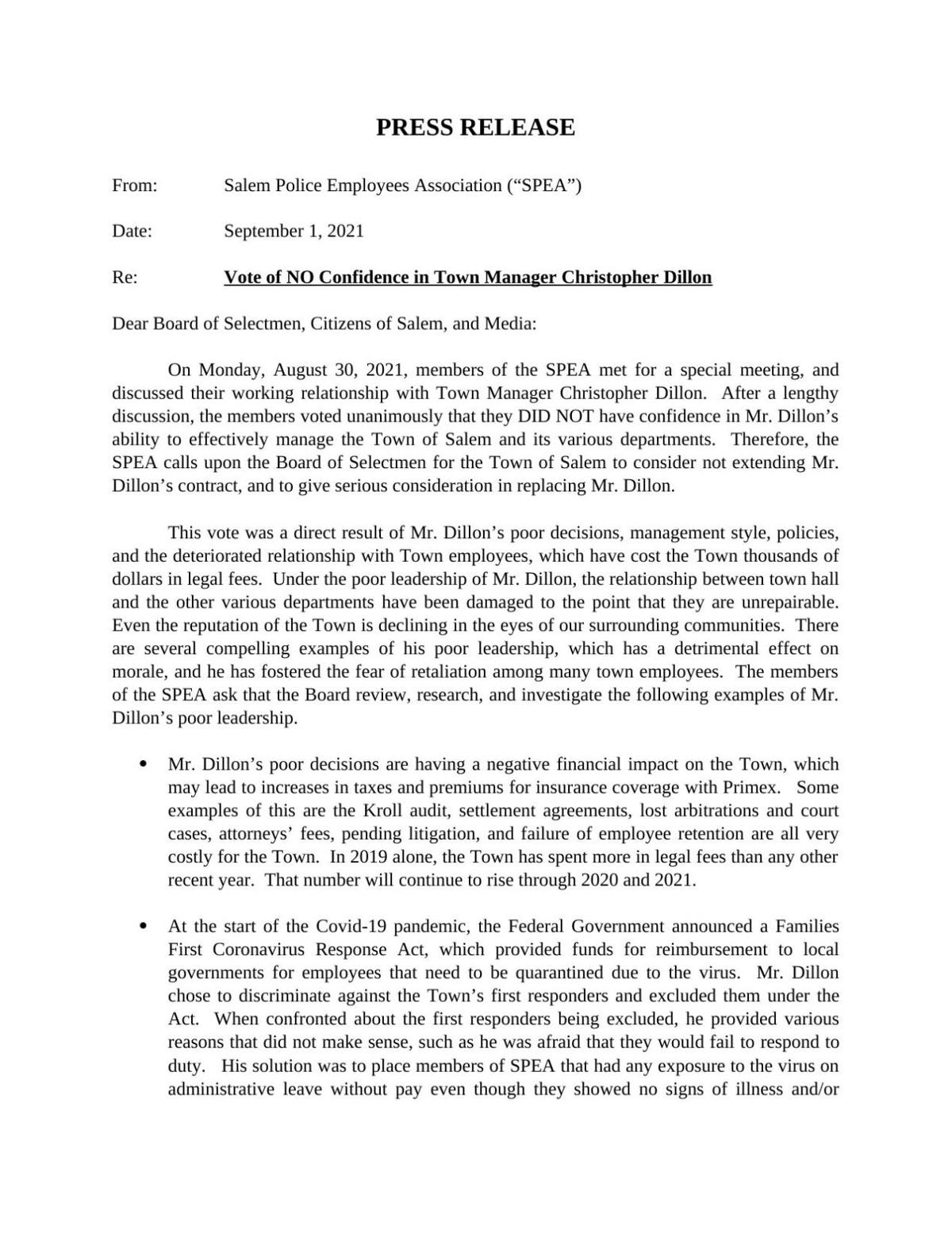 “​This vote was a direct result of Mr. Dillon’s poor decisions, management style, policies, and the deteriorated relationship with town employees, which have cost the town thousands of dollars in legal fees,” they state.

The union claims some departmental relationships have been damaged beyond repair.

The issue nearly came to a head in public, when dozens of police officers showed up at a recent meeting where selectmen were scheduled to talk about extending Dillon’s contract.

Selectman Bob Bryant, however, could not attend and was successful in requesting that the matter be pushed to Sept. 13, when all members will be present.

The union followed up with the letter in an effort to speak up about what they call “poor leadership,” which they say has been detrimental to morale and fostered a fear of retaliation among town employees.

When given a chance to respond, Dillon said via email that he is “saddened of much of the inaccurate information shared in the post/statement.”

He did not elaborate when asked.

“I do appreciate the hard work of those in our police department,” he said, going on to acknowledge failed negotiations that have left the union without a contract for several years, and a 2018 audit that still casts a shadow.

He said, “I support a collective bargaining agreement that is mutually beneficial and hope to repair and move past the culture reference in the Kroll Audit regarding the division between town hall and our men and women in blue.”

According to the union, Dillon is responsible for the stale contracts officers currently work with. As a result, police have not received a cost-of-living wage increase in three years, records show.

Meanwhile, the union is resentful toward substantial raises Dillon has been awarded in that time. According to records, selectmen narrowly approved a 2.5% raise earlier this year.

At the start of the global pandemic crisis, Salem first responders found themselves at odds with Dillon about federal funds intended to reimburse employees that needed to quarantine after possibly coming into contact with the virus or testing positive.

“Mr. Dillon chose to discriminate against the town’s first responders and excluded them under the (Families First Coronavirus Response) Act,” the union letter states. “When confronted about the first responders being excluded, he provided various reasons that did not make sense, such as he was afraid that they would fail to respond to duty.”

Union members say they were placed on administrative leave without pay after any exposure, and were only paid if they used designated sick, vacation or personal days.

An arbitrator has since ruled that the town in fact treated union members unfairly and ordered that their leave be reimbursed.

The union ends its letter by asking selectmen to consider conducting an anonymous survey of all town employees regarding Dillon’s performance before any decision is made regarding his contract.