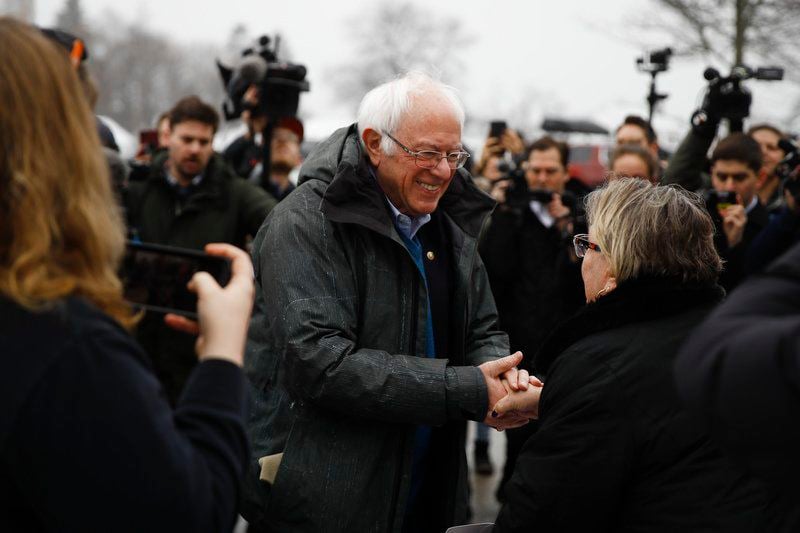 AP Photo/Matt RourkeDemocratic presidential candidate Sen. Bernie Sanders, I-Vt., meets with people outside a polling place where voters will cast their ballots in the primary in Manchester on Tuesday. 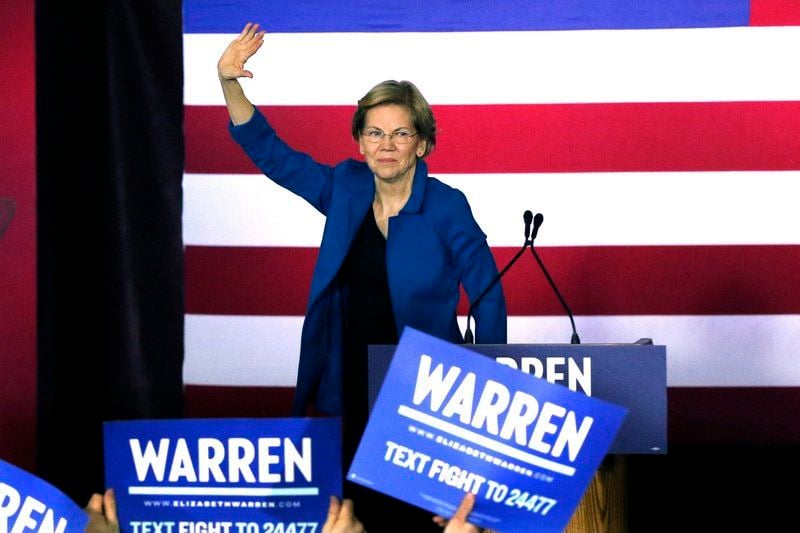 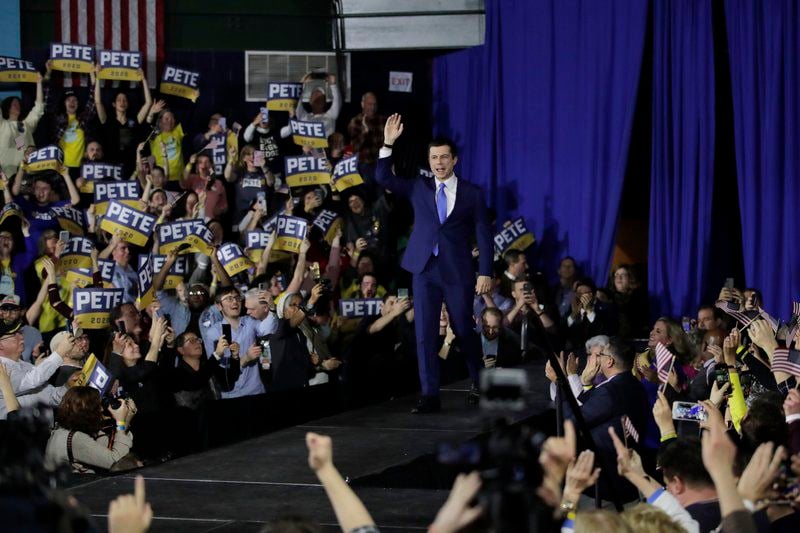 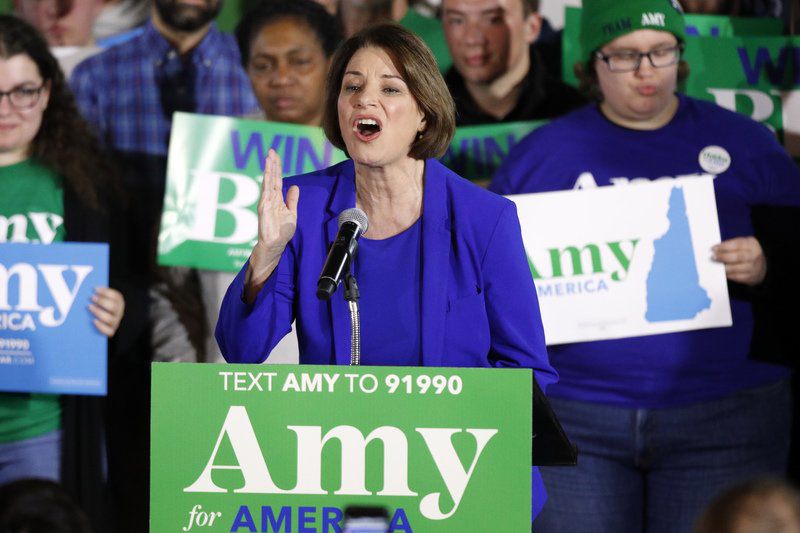 AP Photo/Matt RourkeDemocratic presidential candidate Sen. Bernie Sanders, I-Vt., meets with people outside a polling place where voters will cast their ballots in the primary in Manchester on Tuesday.

Sanders, a Vermont senator making his second run for the White House, won with 26% of the vote with more than 87% of the precincts counted in the first-in-the-nation primary.

Buttigieg, a former mayor from South Bend, Indiana, placed close behind in second-place with nearly 24% of the vote.

In a speech to supporters, Sanders thanked his supporters and said his win in New Hampshire sends a message that he is now the frontrunner in the race.

Gay Fanklefsky of Andover saw Sanders speak at his rally in Manchester Tuesday night. Though she’s still undecided as to who gets her vote on Super Tuesday, she likes Sanders’ compassion.

“He can unite people to understand what he’s doing,” she said.

Sanders maintained a lead throughout the night and won by wide margins in cities like Manchester, Nashua and the state capitol, Concord.

On the campaign trail, Sanders has made the case that Democrats need his progressive agenda and coalition of young people, working-class and first-time voters to defeat Trump in November.

Buttigieg, the only openly gay candidate in the presidential race, has campaigned as an alternative for undecided voters turned off by polar opposites in the crowded Democratic primary race.

He carried a number of affluent towns along the southern tier, including Salem, Pelham, Hudson and Hampstead, and won pockets of communities in the central part of the state.

“Here in a state that goes by the motto ‘Live Free or Die’ you made up own minds,” Buttigieg told supporters in Nashua, congratulating Sanders on his “strong showing” but stopping short of conceding the race. “You asserted that famous independent streak, and thanks to you a campaign that some said shouldn’t be here at all has shown that we are here to stay.”

Bob Boonstra, of Derry, remembers exactly when he first became a Buttigieg supporter.

“It was the first time I heard him talk about attracting future former Republicans,” he said, from the rally in Nashua on Tuesday night.

Both Sanders and Buttigieg have come under fire from their Democratic rivals over the issue of electability, with some warning that either candidate would be crushed by Trump in the general election.

Klobuchar, who has risen the polls following her strong debate performance, exceeded expectations on Tuesday which will give her a big bump heading into the next primaries.

“My heart is full tonight,” Klobuchar told supporters at a rally Tuesday night. “While there are still ballots left to count, we have beaten the odds every step of the way.”

“I was really impressed with her knowledge of foreign affairs,” he said Tuesday night at her party in Concord.

She is “the best person to bring this country together,” he said.

Warren, speaking to supporters at a rally in Manchester after her poor showing on Tuesday, called for party unity in the fractured presidential nomination process.

“The question for Democrats is whether it will be a long bitter rehash of the same old divides in our party, or whether we can find another way,” Warren said.

Both Colorado Sen. Michael Bennet and Andrew Yang dropped out before the winner was called.

Biden, who finished fourth in the Iowa caucuses, had another bad showing in New Hampshire that torpedoes his claim of a frontrunner status. He fled the state for South Carolina before the polls closed.

Trump easily defeated former Massachusetts Gov. Bill Weld with 86% of the votes tallied when the race was called by the Associated Press shortly after 8 p.m..

Trump backer Ken Patey, of Hampstead, said he was pleased to see a robust show of support for the president even though the outcome on the Republican side was less uncertain.

“I’m amazed at the people,” Patey said. “The amount coming out to support Trump is unbelievable.”

Weld was hoping to leverage his name-recognition in a neighboring state for a win in New Hampshire, or at least a good showing, as part of a strategy to hobble Trump’s support in the GOP primary.

He struggled, and didn’t received support from the Republican National Committee, which has expressed its “undivided support” for Trump as its 2020 nominee.

There’s a lot at stake for candidates, and the nation, on the road to the November elections.

Democrats are hoping to coalesce around a candidate who can retake the White House from a president they say has abused the office for political gain and divided the nation with his policies and rhetoric.

Republicans, energized by Trump’s acquittal last week in the Senate impeachment trail, are hoping to give the billionaire real estate mogul another four years to implement his “America First” agenda.

Alan Panteau, 66, a Windham Republican, wasn’t worried about Trump’s chances in Tuesday’s GOP primary but wanted to show his support for a president he says has been treated unfairly.

“The Democrats tried to steal the election by impeaching Trump and it didn’t work,” he said after voting at Windham High School. “He’s looking out for America and we need to get his back.”

The New Hampshire vote kicks off a long schedule of primaries, including the March 3 Super Tuesday contest that includes Massachusetts and 13 other states.