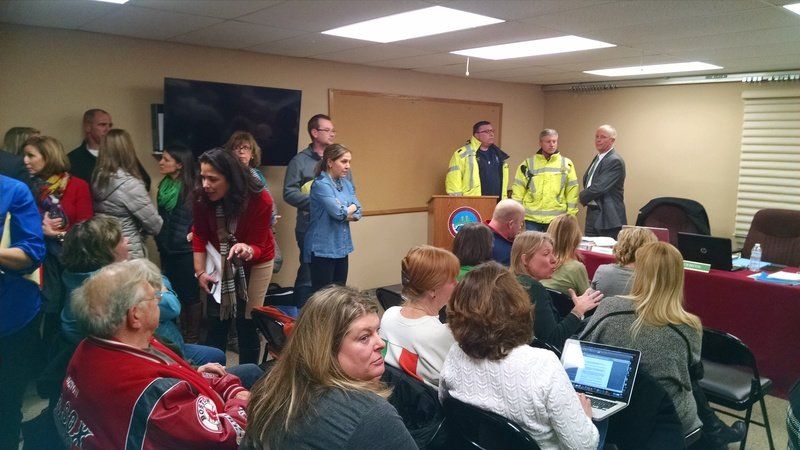 Windham firefighters talk to Windham School District Superintendent Winfried Feneberg about relocating the School Board meeting Tuesday because the room was overcapacity. SAKATA 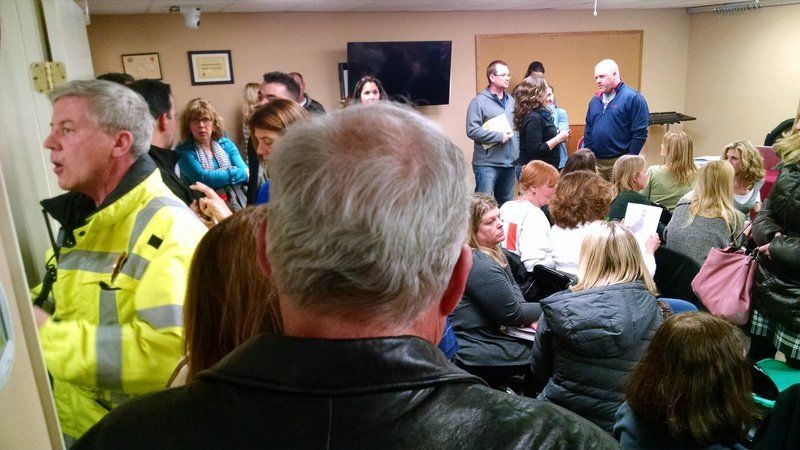 Windham firefighters talk to Windham School District Superintendent Winfried Feneberg about relocating the School Board meeting Tuesday because the room was overcapacity. SAKATA

WINDHAM — The Windham School District and their attorney will meet behind closed doors to discuss whether School Board member Ken Eyring released confidential school documents.

School Board member Dennis Senibaldi made the accusation about Eyring during a meeting Tuesday, saying he violated board procedure by sending legal opinions from the district's lawyer to a state politician.

Eyring acknowledged he sent the email, but denies he violated board procedure, citing the state Attorney General's Right-to-Know law. The document is public information under the law, he said.

The accusation was made during discussion about the board's next chairman, when Eyring was nominated and then selected over Senibaldi on a split vote, 3-2.

"I am disappointed with those who talk about transparency and would knowingly release confidential information," Senibaldi said during a break in the meeting Tuesday.

Senibaldi during the meeting produced copies of the email, which he brought to the attention of Superintendent Winfried Feneberg last week. Feneberg during the meeting agreed with Senibaldi that Eyring violated past board protocol. Senibaldi would also consult the school district's legal counsel on the matter, but he declined to elaborate what counsel told him.

Senibaldi said he wouldn't have raised the issue if there wasn't concern from the district's legal counsel.

The legal opinion relates to a draft contract between the school district and an energy-saving company, Cenergistic, the district had considered partnering with.

On Jan. 24, Eyring emailed Rep. Bill O'Brien about a clause in the contract that he claims would have made it difficult for the school district to terminate.

The School Board agreed during the meeting to have further discussions with legal counsel to determine if any board policies had been violated, and then further discuss the matter.

Eyring defended his actions, saying he was seeking confirmation, and another opinion, about language in a contract. The Right-to-Know law prevents a public body from stamping material confidential to circumvent disclosure, which was the case here, he said. The item in question was minutiae and didn't pose any harm to the district, he said.

Eyring accused Senibaldi of playing politics. He says he has no plans of stepping down as chairman, regardless of what the school district's attorney says, because he did nothing wrong.

The new board members, Popovici-Muller and Murray, were sworn in Tuesday.

Senibaldi, and School Board member Rob Breton, nominated one another for the chairman and vice chairman position, but failed to receive a majority vote. Eyring was appointed chairman by Popovici-Muller and Murray/

Murray, who has no experience on the school board, was appointed vice chairman.

"I am very disappointed in the action of Mr. Senibaldi," Eyring said. "The town has clearly spoken they want a new direction and new leadership from the school district."

Popovici-Muller said the document would be examined.

"I am obviously planning to look at the details, listen to legal counsel and use that to base my (future) opinion," Popovici-Muller said.

There were more than 70 residents who came out to the meeting in the Community Development Department room in Town Hall. Firefighters arrived about an hour into the meeting and ordered the meeting relocated to the Town Meeting room because the room exceeded the 40-person capacity.

Some residents said Senibaldi deserved the chairman position, while others disagreed. Others urged the School Board to stay focused on the students.

"I expected you to be civil and polite and not rude to each other and disrespectful," Cynthia Finn said. "I am not getting that from you."

Senibaldi said he saw the email in the inbox of Selectman Bruce Breton, who routinely asks Senibaldi for email help.

Breton said Wednesday the email was taken from his account without permission.

Senibaldi has known about the email since Jan. 26, but he held off on notifying the superintendent and school board until after the elections. Senibaldi defended his decision to send himself the email, saying he was given the password and access to the account by Breton.

"I held off because I didn't want to influence any election stuff going on," Senibaldi said. "There was enough mud slinging and mud throwing. I waited as along as I could and then sought advice from counsel."