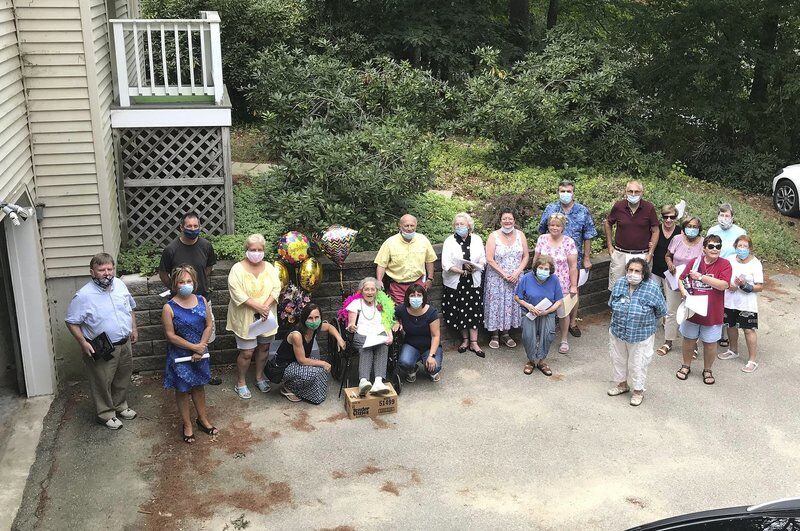 Verna Marie Carbone, 102, was recognized as the oldest person in Plaistow recently. Here, Carbone, seated in a wheelchair, is surrounded by friends and family. 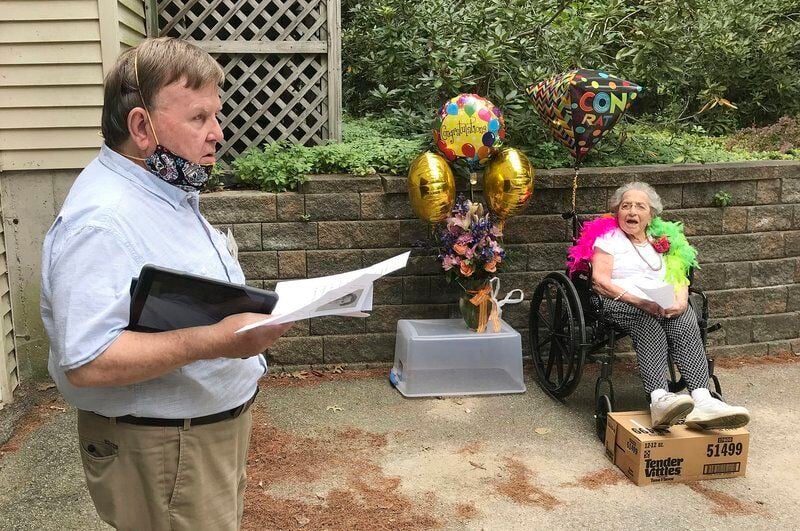 Verna Marie Carbone, 102, was recognized as the oldest person in Plaistow recently. Here, Carbone, seated in a wheelchair, is surrounded by friends and family.

PLAISTOW — Pandemics are nothing new to 102-year-old Verna Marie Carbone.

She was born July 31, 1918, when the deadly Spanish flu was in full force. Her birth was celebrated in much the same manner as her current achievement, being named Plaistow's oldest resident.

Everyone who attended both occasions wore masks.

Carbone was named Plaistow's oldest person Thursday and received the town's Boston Post Cane in front of family and friends at an outdoor, socially-distanced ceremony.

"I've waited and I've waited very well," Carbone said with a beaming smile on her face.

Carbone had her eye on the gold-tipped ebony cane for years. Her sister-in-law, Dena Carbone, held the honor as Plaistow's oldest citizen from 2010 to 2016, when she died at the age of 103 years, 1 month and 24 days, according to town records.

Mina Colcord was then awarded the cane in 2016 as the oldest resident in Plaistow. She was about a year older than Verna Carbone.

Colcord died peacefully in June surrounded by family, according to her obituary. She set Plaistow's record for the oldest living cane recipient at 103 years, 4 months and 10 days old. Carbone now sets her own record as the oldest person to receive the cane.

"I deserve one (a cane) like this, with a gold top. I'll show all my friends," Carbone said.

The Boston Post Cane began as part of a marketing program by Boston Post newspaper publisher Edwin Grozier in 1909. The newspaper gave 431 ebony canes to New England communities to be awarded to each town's oldest living resident.

Not much is known about the earliest recipients of Plaistow's Boston Post Cane. It was lost for years but then reappeared in 1975, explained James Peck, town historian and a member of the Plaistow Historical Society.

Since 1975 there have been 10 recipients — three men and Carbone makes seven women. In the early days, the cane was only bestowed on men until 1930, he said.

"Verna follows up the tradition that good things come in small packages — for she is a good student, and as many of us know, full of fun," Robert Hobbs, Plaistow Historical Society's president, read from her high school yearbook.

Friends and family at the ceremony agreed Carbone, a former teacher, is full of fun.

Her nephew, Gerry Carbone, recalled stories of vacations with her, including her taking him and friends on a trip to Canada shortly after his high school graduation.

Kim Busta, who works for Carbone as an aide, recalled recently going through old cards with Carbone. Most said, "You have the best smile, keep that smile."

Busta didn't know Carbone years ago when she was acting in local plays, but later when the women connected Busta remembered seeing Carbone's smile from the audience.

Now Busta regularly bursts into singing and dancing while working with Carbone, who "loves it."