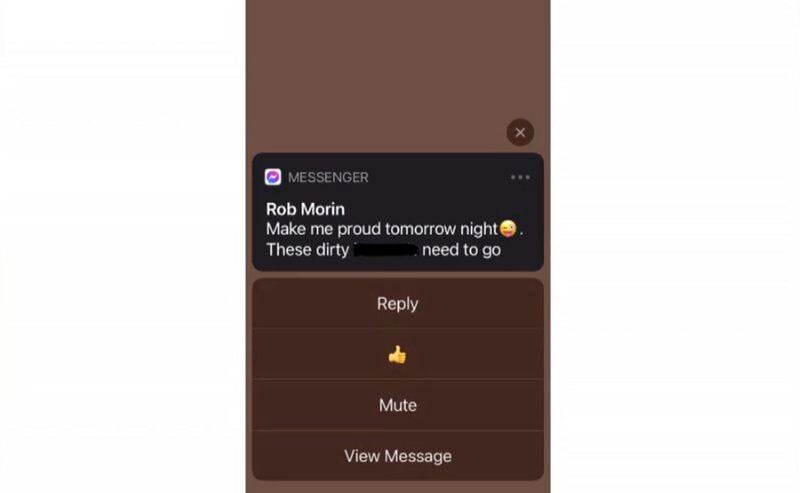 SALEM, N.H. –– A private Facebook message written by former Deputy Police Chief Rob Morin will be forwarded to the New Hampshire Attorney General, FBI and U.S. Department of Justice with a request for an investigation, three Selectmen decided Monday night.

Selectman James Keller explained he did not receive the message firsthand, but it was forwarded to him by “one or more Budget Committee members,” whom he did not name.

He believes it was sent in advance of a Budget Committee meeting on Saturday, when members harshly scrutinized Keller for an answer he provided them months earlier regarding a raise given to the town manager. Records show that Dillon's pay was boosted nearly $12,000 – or 8% – in 2020, bringing his salary to $150,000.

Before the selectmen's meeting, Town Manager Chris Dillon said he confirmed with an attorney for the town that there was no legal consequence in sharing the message publicly.

It is not clear who the intended recipient was or when it was sent, and Morin refused to comment for this article.

When questioned in the fall, Keller told Budget Committee members that Dillon's raise awarded by selectmen was written into his contract. However, when a member of the committee later reviewed the document, there was no mention of an obligatory increase in pay.

Committee members expressed frustration and shared feelings that they were purposefully misled by Keller.

“It was very clear you wanted to shut us down,” member Tanya Donnelly said.

Keller said Monday night to his fellow selectmen that he apologized to the committee, provided an explanation of what he considered a misunderstanding, and was prepared to move on.

That was until he received the copy of Morin’s Facebook message, he said.

“It certainly creates, I don't even know what the right words are – pretty significant concern,” he said. “I felt in this case, often times we let things go, we take care of things behind the scenes, but given the vitriol that has been exhibited for the past two plus years, I didn’t feel it was appropriate to do that.”

He added, “It’s not my job to investigate this, but if the chairman would allow, I would request that the town manager forward this to the New Hampshire Attorney General, the FBI, the U.S. Department of Justice.”

Keller said he believes “it may be material in not only investigations that are ongoing, but in fact legal action that this individual is taking against the community of Salem.”

The reference is to an ongoing civil lawsuit filed by Morin against Dillon, Human Resources Director Anne Fogarty and others he believes are responsible for slandering his name. The suit does not include a monetary amount that Morin is seeking.

Morin also remains under investigation by the New Hampshire Attorney General for possible criminal wrongdoing, resulting from a 2018 audit of the Police Department when Morin was a top-ranking officer. He has been retired from the Salem Police Department since June 1, 2019.

He reasoned that the message is undated,

"I don’t know what that is a reference to,” he said. “I don’t want to keep this fight going forever."

Bryant also pointed to an issue with Keller’s explanations of the town manager's raise.

“What you said was that we had a conversation in public forum about the town manager’s salary. And if you remember, that did not happen,” Bryant said. “...The vote of the board was never discussed, where it was the year before, and I think that's probably where everyone is getting a little testy."

Bryant says now he should probably have "jumped in front of that one" and started a larger discussion at the time.