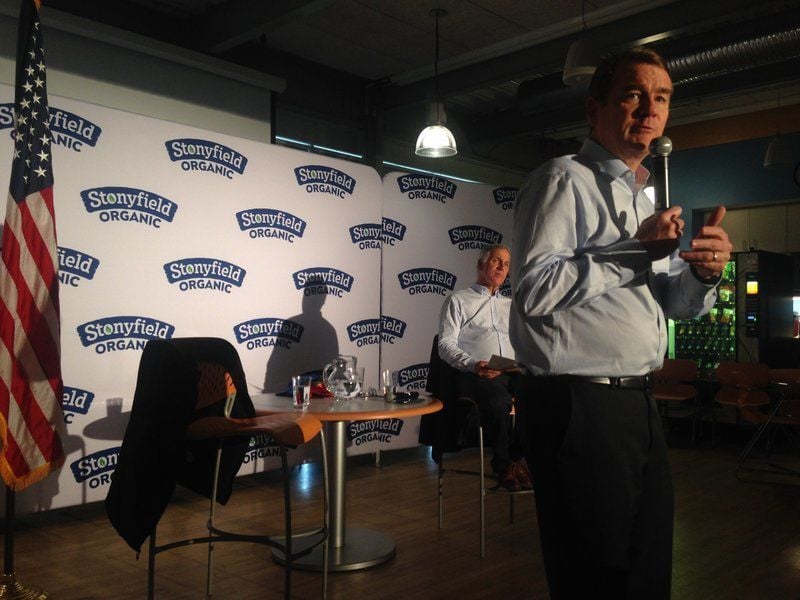 JULIE HUSS/Staff photoSen. Michael Bennet, D- Colorado, a candidate for president, speaks to the crowd gathered at Stonyfield Organic during a climate and agriculture forum. 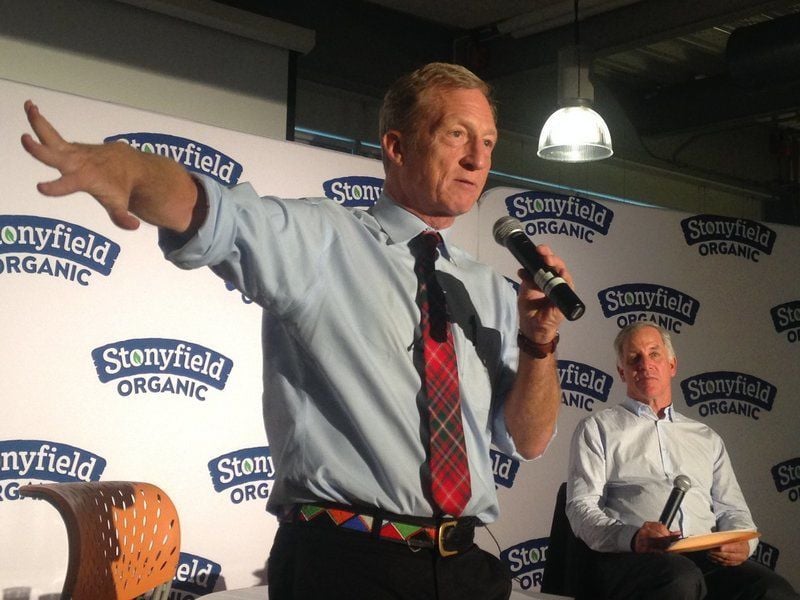 JULIE HUSS/Staff photoSen. Michael Bennet, D- Colorado, a candidate for president, speaks to the crowd gathered at Stonyfield Organic during a climate and agriculture forum.

LONDONDERRY — For the list of Democratic candidates hoping to take the nation's top office next year, having views on how to handle climate change is a common cause.

And hearing from candidates in an intimate space recently offered people a chance to gauge those views and hear possible solutions.

Stonyfield Organic hosted is second climate and agriculture forum Friday afternoon, inviting Democratic presidential candidates Tom Steyer and Sen. Michael Bennet to come to the Londonderry company and give their views on the state of the planet and what can be done to protect its resources.

The forum was also supported by the New Hampshire Young Democrats, New Hampshire Businesses for Social Responsibility and the New England Farmers Union.

He added both Bennet and Steyer are great friends of his, with a common mission to help secure a safe climate and planet. He stressed that the changes in climate are having stern impacts on many areas, including the farms and animals.

"Climate change is here," he said, adding supporting agriculture is one way to "work our way back."

Each candidate had an individual time frame to speak and then fielded questions from those attending.

Bennet led off the forum, saying the issue of climate change is a real global threat and, if elected president, he has a concrete plan on what to do.

Calling out the "climate deniers," including President Donald Trump, he said there is little being done now in Washington to make sure generations to come have a clean future.

"We need to create a solution that will last for generations," Bennet said.

His official climate change plan includes a commitment to conserve 30% of America's land and oceans by 2030, supporting American agriculture and creating a Climate X Option to require power providers to support reducing emissions and offering a cleaner energy option to homes and businesses while also supporting more clean vehicles and other green/clean technologies.

His effort, America's Climate Change Plan, will also engage people from across the country to be part of a diverse group to help put American back into a strong leadership role in the world when it comes to climate.

On day one in office, he would establish the American Climate Council, Bennet said. America would also rejoin the Paris Climate Agreement.

"The vast majority of Americans think climate change is real," Bennet said. "But there is a lot of denying going on."

Grace Reisdorf of Derry didn't have a specific question for Bennet, but said as an avid skier she worried that the winters in New Hampshire were shrinking and seasons were getting shorter.

"We don't have winter anymore, it's sort of like a spring thing," she said.

Bennet agreed and said even in his state of Colorado, between drought, fires, and lower winter temperatures, it's a losing situation for everyone.

"We will find a way to succeed," he said, adding America will once again become a leader in the world on climate.

For Steyer, his first day in the Oval Office would include making climate change a main effort to make America the leader again on the world stage.

"I will make it the focus of my foreign policy and I would declare a state of emergency," Steyer said.

Calling himself the "outsider" within the Democratic pack of candidates, Steyer said he has spent years talking about climate concerns and ways to protect the planet.

Steyer said he also would re-enter America in the Paris Climate Agreement and work with partner nations toward finding solutions.

It's all about priorities, Steyer said, and prioritizing actions to accelerate that clean energy future.

"Everybody is in favor of clean energy, it's a no-brainer," he said. "We are smarter than just burning rocks."

Supporting cleaner technologies is key, as is supporting the nation's farmers and ranchers.

Steyer, like Bennet, said climate change is a major problem and America's people will realize what's at stake if something isn't done.

And both agreed, it's time for America to lead again in this arena.

"I think the American people realize what's at stake," Steyer said. "To me, this is the time. Just like climate, we have to do it, we can do it, and we will do it."