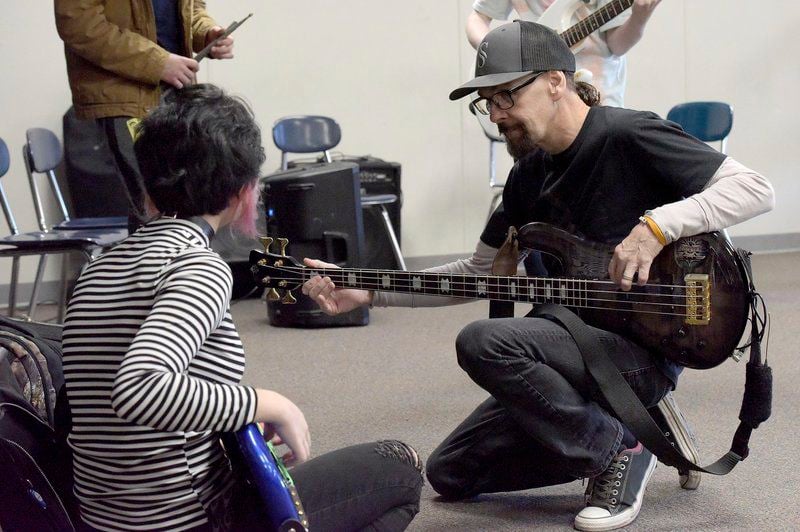 TIM JEAN/Staff photoGodsmack bass player Robby Merrill works with students at Gilbert H. Hood Middle School as they learn music as part of a video for the band's song "Unforgettable." 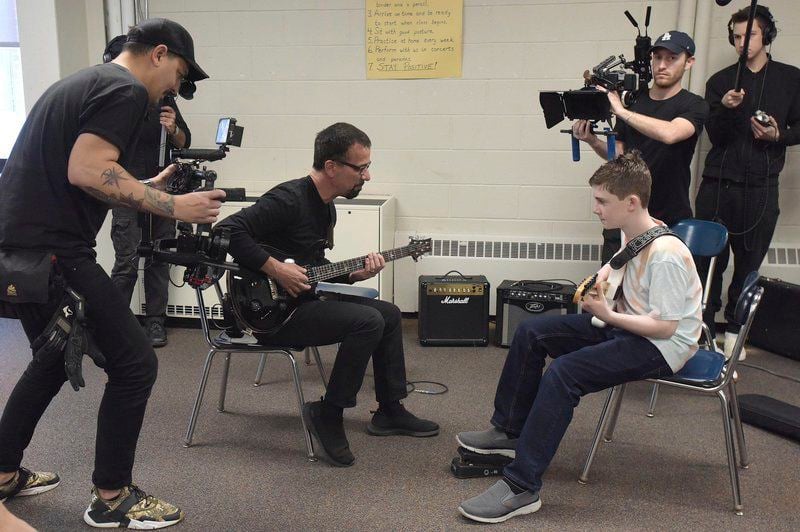 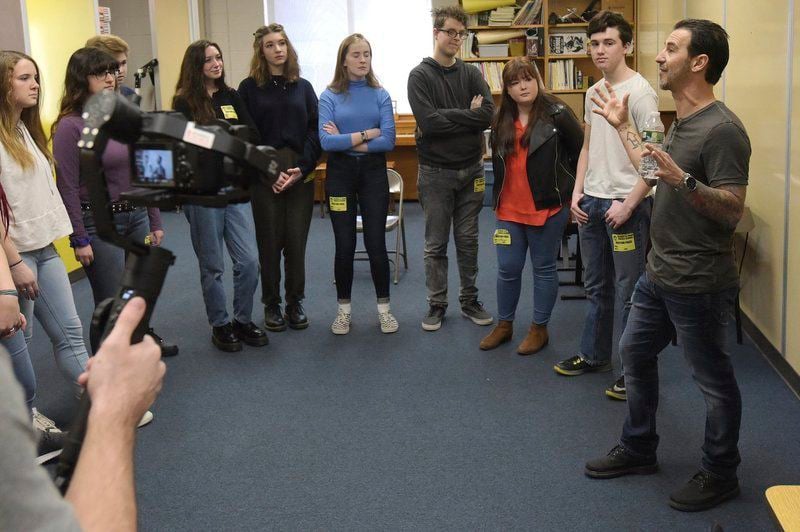 TIM JEAN/Staff photoAt right, Sully Erna, lead singer of rock band Godsmack, talks to students at Gilbert H. Hood Middle School in Derry as they learn part of a song before filming a video for the band's song "Unforgettable." Students from West Running Brook Middle School also were part of the video event.

TIM JEAN/Staff photoGodsmack bass player Robby Merrill works with students at Gilbert H. Hood Middle School as they learn music as part of a video for the band's song "Unforgettable."

TIM JEAN/Staff photoAt right, Sully Erna, lead singer of rock band Godsmack, talks to students at Gilbert H. Hood Middle School in Derry as they learn part of a song before filming a video for the band's song "Unforgettable." Students from West Running Brook Middle School also were part of the video event.

DERRY — Music is an outlet that can spark a memory, draw out emotions or even save a life.

That, according to Salvatore "Sully" Erna, is why he calls music his personal outlet for peace and success.

The 52-year-old founder and front man of multi-platinum-selling, Grammy Award-nominated rock band Godsmack appeared before 300 Derry students Friday morning at Gilbert H. Hood Middle School, telling stories of his background growing up in Lawrence, his career, while sharing thoughts on how music formed his future and saved his life over and over again.

Erna's visit was also part of a major project involving students from both Hood and West Running Brook Middle School, giving students the opportunity be part of a video for the band's song "Unforgettable" from the "When Legends Rise" album.

Erna took the Hood stage early in the day to offer a few thoughts before staring the video work with the students and his band.

For him, it was all about the music while growing up in Lawrence — an outlet to bring him back from sometimes dangerous behaviors he found himself falling into.

"Growing up I had every challenge in the world," Erna said. "Fights, drugs bringing you down the wrong path. I got really good at being bad. Thankfully, I had music in my life."

Erna's connections to Derry have been strong for years.

The musician has held connections to Community Alliance for Teen Safety, an organization working to support youth with making safe life decisions.

And two years ago, Erna and Godsmack came to Derry and joined with 20 middle school students from both Hood and West Running Brook to record backup vocals for the song "Unforgettable."

Students were then invited to appear on stage months later during a Godsmack performance at the Bank of New Hampshire Pavilion in Gilford, New Hampshire. Each student received a vinyl copy of the album signed by the band.

Some students involved in the project with Erna two years ago returned Friday morning to talk about their experiences.

Victoria Volokitkin, 16, is now a sophomore at Pinkerton Academy in Derry, but she remembers that time two years ago when she had the opportunity to appear on stage with Godsmack.

"It was so much fun," she said. "It assured me it was something I wanted to do in the future."

Kathryn DeLong, 15, attended Hood two years ago when she met Erna and his band and sang on their album.

"I hadn't heard of (Godsmack) at all," she said, adding the music was "quite catchy" and she liked it a lot.

"It was really a good experience," Kathryn said. "It opened up a lot of opportunities we wouldn't have had."

Others said the Godsmack experience was life changing.

"Two years ago, I thought, this can't be happening to me," said 16-year-old Adam Carvalho, now a high school sophomore. "I didn't think of myself as important, or didn't feel unique and special in today's world. Now, every time I hear the song, I remember what a great experience it was."

"And I appreciate Sully and his willingness to give back," Garofalo said.

Kate Boisvert, a music teacher at Hood, said the experience two years ago was unforgettable.

"Two years ago, we got this amazing opportunity," she said. "This is what music means to you, it's the passion that drives you through life."

Music is something everyone shares, Boisvert added, with Erna now circling back to bring another chance to hundreds of students by involving them in the video.

Then on Saturday, all students were scheduled to climb on buses to head to Manchester for more video filming of "Unforgettable" at the SNHU arena.

The video is expected to be released in the next several weeks.

Erna called music a "universal gift" and something students should strive to hold on to, no matter what their future paths hold.

"You are going to pass that on to your kids someday," Erna said, recalling his own family's deep ties to music. "And focus on things that make you feel amazing. Find what it is that grabs you and spend time mastering it. Be great at what you do, and for me, it was music. That's the thing that will save your life someday."