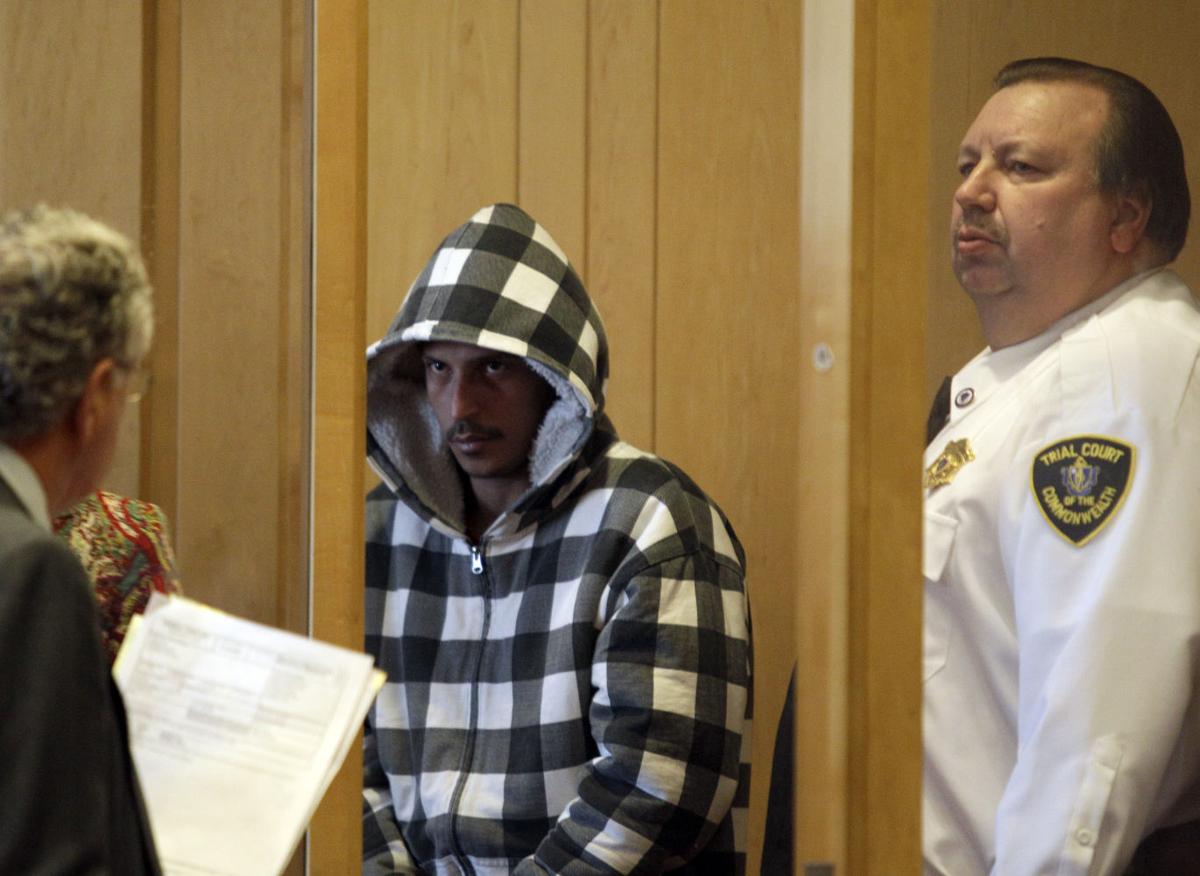 Sarah Terrero, a cousin of Johanns Miranda, wipes a tear as she listens to the arraignment of Josue Diaz in Lawrence District Court. Diaz was arrested in connection with the murder of Miranda. 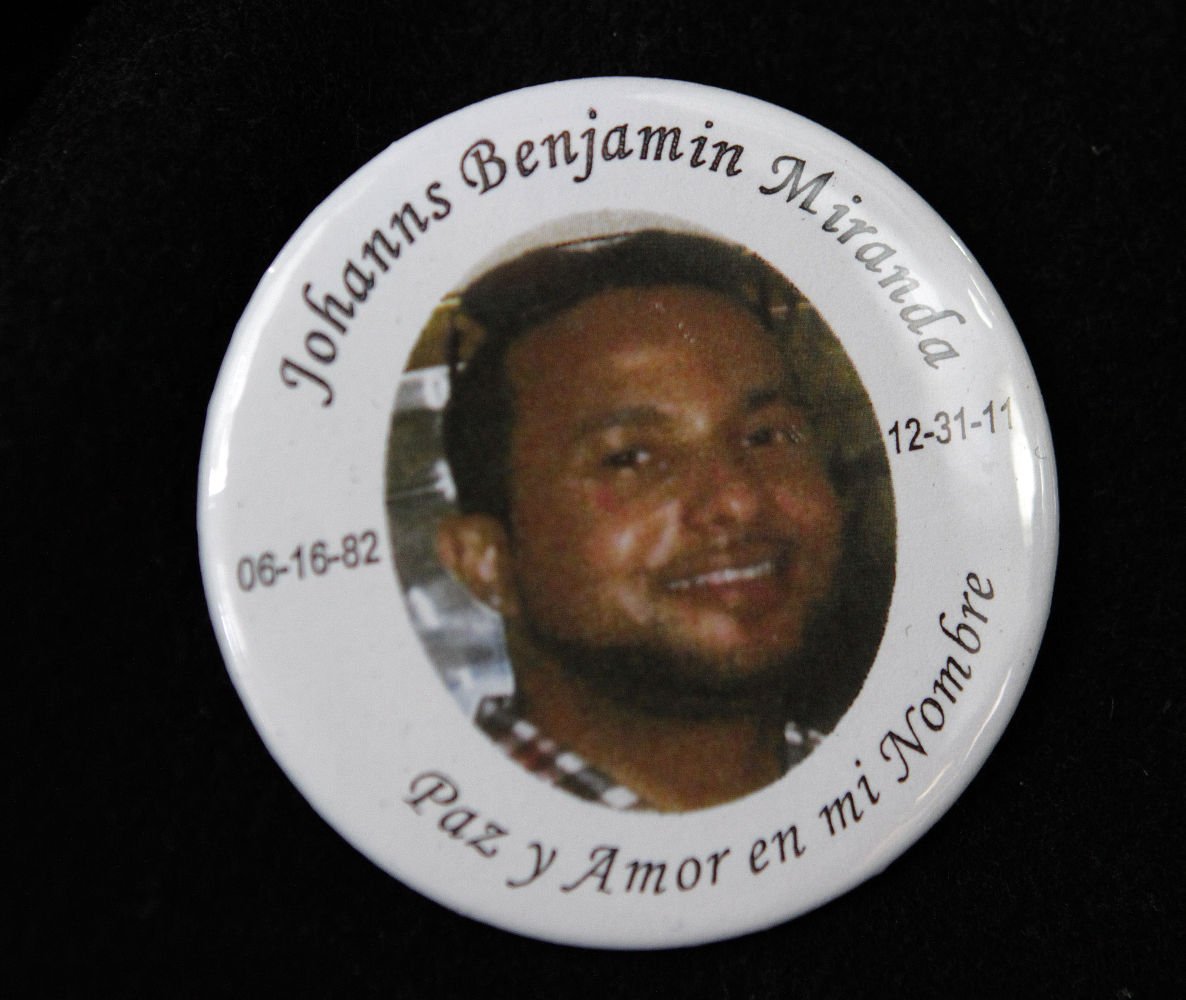 A button on the jacket of Sarah Terrero, cousin of Johanns Benjamin Miranda.

Sarah Terrero, a cousin of Johanns Miranda, wipes a tear as she listens to the arraignment of Josue Diaz in Lawrence District Court. Diaz was arrested in connection with the murder of Miranda.

A button on the jacket of Sarah Terrero, cousin of Johanns Benjamin Miranda.

LAWRENCE — Just days before he allegedly shot a man to death, Josue Diaz tried to set things on fire and threatened to kill himself in the apartment he shared with two women and two toddlers, according to court records.

Diaz, 27, was held without bail after his arraignment Monday morning in connection with the murder of Johann Miranda, 29, a father of two from Fairhaven. The killing happened nearly a year ago.

Diaz is accused of shooting Miranda several times after an early-morning argument near a chimi food truck parked near the Campagnone Common on Dec. 31, 2011.

At 1:20 a.m., Diaz allegedly lashed out and then gunned down Miranda because he was Dominican  and not Puerto Rican, according to police and Miranda's family members. They said the two men did not know each other.

After going out in Boston, Miranda came to Lawrence to go to club El Cesar 99 Essex St., before stopping at the chimi truck for some late night food, his cousin said.

Just three days before the murder, Diaz was arrested and charged with trying to burn down the 29 Whitman St. apartment he shared with his girlfriend and his 15-month-old son, his girlfriend's sister and her 18-month-old son. In a report filed on Dec. 28, 2011, police said Diaz tried to set things on fire in the apartment and also threatened to kill himself with a butcher knife when his girlfriend said she wanted to end their relationship.

The girlfriend also told police that on previous occasions Diaz slapped her across the face, pushed her and tried to set curtains in the apartment ablaze, according the court papers. Diaz was charged with domestic assault and battery and attempting to burn personal property. He is scheduled to go on trial in that case on Jan. 8, according to court records.

After Diaz's murder arraignment, Miranda's cousin Sarah Terrero said the random attack cut short the promising life of a man who worked hard and was a great father to his two sons, ages 6 and 11.

In 2012, Miranda planned to get engaged in 2012 and also wanted to start his own towing company. He attended high school in Roxbury before going to work for Stop & Shop, Terrero said.

"We knew this day was going to come, even if it did take a year," Terrero said of the arrest and arraignment.

In court Monday, Diaz was allowed to pull his coat hood over his head, somewhat shielding his face from public view. Terrero said she was disappointed because she couldn't see exactly what Diaz looked like.

"I have so many feelings ... I feel very emotional and hope this will bring closure ... ," said Terrero, who came to court with numerous family members, including Miranda's father, brother and sister. Terrero wore a button with Miranda's picture on the lapel of her black wool coat Monday.

Miranda was shot to death at 1:20 a.m. Six confidential witnesses told police that Diaz was involved in the altercation near the chimi truck parked at 56 Jackson St. and that he was the person who shot and killed Miranda, according to court papers.

Sheehan said the case will be presented the Essex County Grand Jury for indictment in Superior Court on the murder charge.

In mid-November, the district attorney's office released surveillance video taken near the chimi truck that night, looking for the public's help identifying witnesses. However, Diaz's arrest at 21 Blakelin St. at 7:30 Sunday night was not prompted by a tip involving the video, police said.

Diaz is scheduled to return to court on Jan 30 for a probable cause hearing.