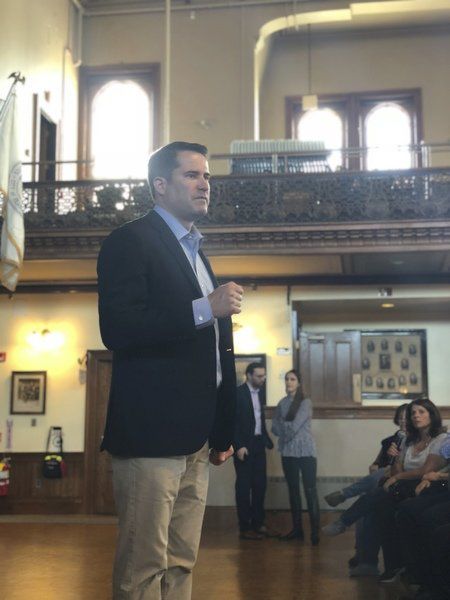 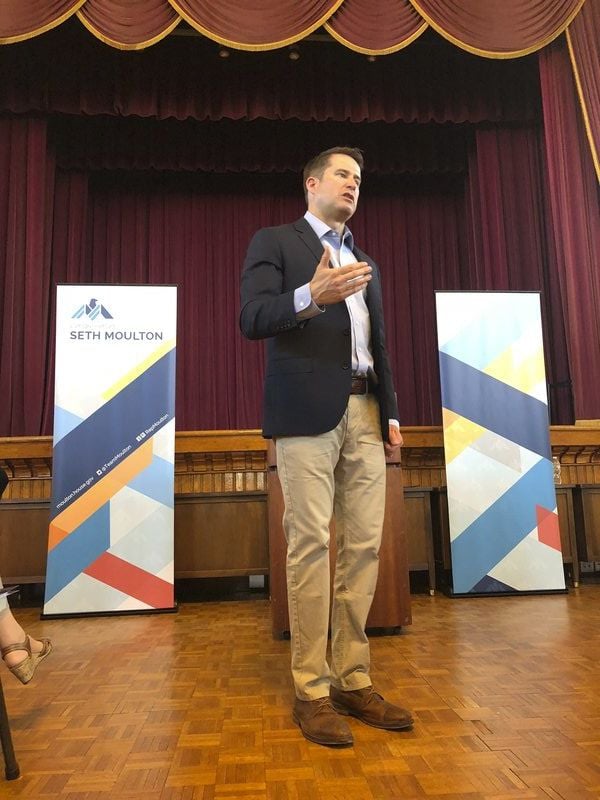 More than 100 people went to Peabody City Hall on a sunny, Saturday afternoon to ask such questions, largely expressing their concerns about national issues affecting people locally. Moulton spent about an hour at his Town Hall event speaking to topics that ranged from the opioid crisis and money in politics, Syria and veterans services to the NSA and the EPA.

"My family lives in Parkland and my friends were lucky enough to be survivors of the shooting. I'd just like to thank you for your dedication to passing stricter gun laws," Laura Miller said. "Specifically, though, how do you plan to pass all this legislation given that, as you said, much of the Congress is doing nothing and even our president wants to pass legislation to arm our teachers?"

Miller, who attends the Waring School in Beverly, has an aunt, uncle and cousins who live in Parkland, Florida, and knows survivors of the shooting at Marjorie Stoneman Douglas High School on Feb. 14.

"I am going to keep doing everything I can to pass sensible gun reform laws for our country," Moulton replied.

He is working on the bill to ban bump stocks, an accessory that allows semiautomatic weapons to mimic automatic fire, used in the Las Vegas shooting in October 2017. He admitted the accessory is a small part of the problem, but is a step in the right direction, adding that the bill has more Republican support than any other gun bill in Congress.

Sharen Froilan, 52, asked about addiction and the prison system, stating that President Donald Trump talks about the opioid crisis but hasn't provided any funding to address the issue.

The legislation Froilan referred to, signed into law on April 13, modifies the criminal justice system in a way that is meant to empower police officers to crack down on the opioid crisis by holding fentanyl and carfentanil traffickers more accountable.

While the overhaul repeals mandatory sentences for some minor drug offenses, it updated the penalties for trafficking in fentanyl and carfentanil — synthetic drugs fueling the overdose crisis. It includes new mandatory minimum prison sentences for fentanyl trafficking.

"I do think this is an important step in the right direction. It's the kind of reform that we should be looking at as a country," Moulton said. "The reality is that we're all in this together. Consent of the governed also involves how we pay for these things and so, you know, in some ways the question goes back on you: Where are you willing to pay more to pay for these things that we need? And that's a hard choice because many of you are just struggling to make ends meet."

Moulton went on to say that tough decisions need to be made as a community and as a country about where government funds should go, where to make cuts or where to raise revenues to pay for these services.

"And those are tough choices so I don't know exactly what that answer is," he said.

The final question of the event was given to Peabody City Councilor Joel Saslaw, who asked about recreational marijuana.

Moulton noted the disconnect between the state and cities and towns across Massachusetts that have banned the drug in their communities.

"I think this is a mistake on the part of Peabody or other cities that chose this path," Moulton said. "The reality is, we're not going to make marijuana go away by pretending that it's not in our community. What we ought to be doing is figuring out ways to regulate its use responsibly because otherwise it's going to be used in the shadows."