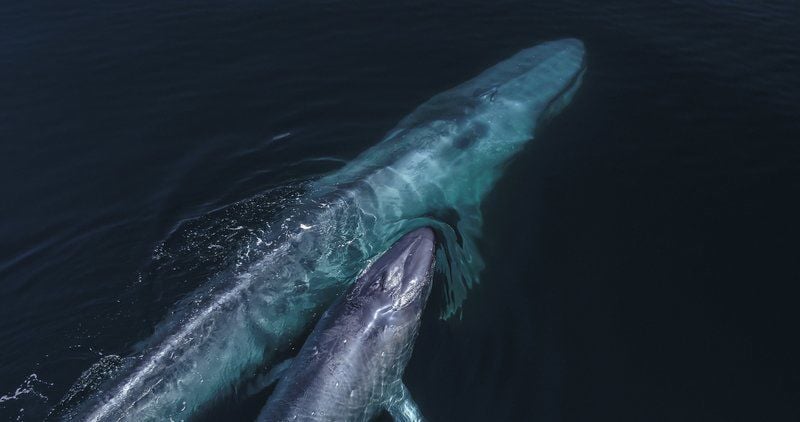 CHRISTIAN MILLER/Courtesy photoAn adult and young blue whale, which can grow to 100 feet long and weigh more than 150 tons, swim just below the surface in an image captured using an Ocean Alliance SnotBot. 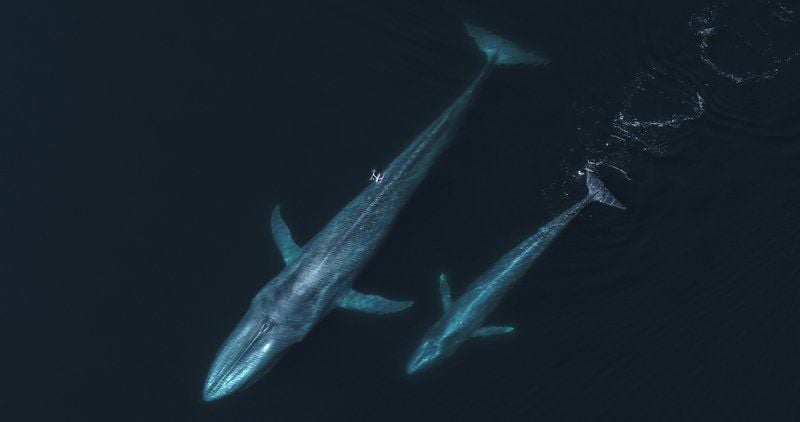 CHRISTIAN MILLER/Courtesy photoThe SnotBot hovers over blue whales, the largest creatures on the planet. The whales come up for air every 9 to 12 minutes, at which point Ocean Alliance drone pilots collect the whale blow or snot.

CHRISTIAN MILLER/Courtesy photoAn adult and young blue whale, which can grow to 100 feet long and weigh more than 150 tons, swim just below the surface in an image captured using an Ocean Alliance SnotBot.

CHRISTIAN MILLER/Courtesy photoThe SnotBot hovers over blue whales, the largest creatures on the planet. The whales come up for air every 9 to 12 minutes, at which point Ocean Alliance drone pilots collect the whale blow or snot.

In addition to SnotBot’s television debut, which was narrated by actor Will Smith, the Gloucester-based nonprofit organization last week received a Webby Award, presented annually by The International Academy of Digital Arts and Sciences for excellence on the Internet.

“It’s been an exciting week here for all of us at Ocean Alliance,” CEO Dr. Iain Kerr said. “We’re only a little group here but we’re certainly getting a lot done.”

The NatGeo episode, titled “Escape,” explores how humans might leave Earth and build another colony somewhere else. It examines barriers to this endeavor, including space radiation, microgravity and the bacteria inside us.

“These astronauts are talking about the fact that when you leave Earth and you go out into space, it really does look like Planet Ocean and that’s always been my big thing —we don’t live on planet Earth, we live on Planet Ocean,” Kerr said. “There’s quite a broad perspective represented in this series.”

Hadfield explores the 2017 Parley SnotBot field season, where an Ocean Alliance team observed blue whales in the Sea of Cortez. The largest animal that has ever existed on the planet, the adult blue whale can weigh more than 150 tons and grow 100 feet long, according to Kerr. Just the tongue of a blue whale can weigh up to five tons.

“The largest dinosaur could walk through the jaw bone of a blue whale,” Kerr said. “An adult could crawl into the ventricle of the heart of a blue whale.”

Though they observed the largest creature to ever exist on our planet, Ocean Alliance was really after some of the smallest organisms.

Using the SnotBot to capture whale blow, or whale snot, Ocean Alliance collects data through DNA and micro-biomes that are released with the bodily fluid. Micro-biomes are the collection of microorganisms living in or on the body.

“This shows how new technologies enable us to look at the biggest of animals in a very non-invasive manner and learn how the smallest animals make these organisms tick,” Kerr said.

The Gloucester organization, which aims to preserve whales and the ocean through research and education, usually makes three expeditions a year with the SnotBot and four or five people. Field work typically lasts two weeks, but the data collection, organization and research extends the entire process to around five weeks.

“It’s just unbelievable looking down at this huge animal,” Kerr said. “For me, it’s incredibly exciting. I have to focus to make sure I collect the data because you’re in such awe looking at these creatures from the air. We’re seeing that animals do things that have never seen before because you’re up in the air looking down through the water.”

Kerr credits much of Ocean Alliance’s success to its business model, which is inherent in the name.

The work it’s doing with SnotBot is broken down into two main components, Kerr said. The first is developing the tool, the second, analyzing the data.

“It’s an interesting process where we’re developing the tool and also collecting hard data, which is getting analyzed by our partners,” he said.

Ocean Alliance works with the top whale DNA expert in the country, Dr. Scott Baker at Oregon State University, and hormone specialist Dr. Shannon Atkinson at the University of Alaska Fairbanks to analyze the collected data, according to Kerr.

“We’re quite lucky to be working with different people and this is where the name Ocean Alliance comes from — the fact that we’re partnering with these people,” Kerr said. “I almost feel this type of collaboration is the future of this type of research.”

In Kerr’s mind, working with drones is a sort of democratization of science because more people can get involved in the less expensive research method.

The group won a Webby for its Intel/Parley SnotBot production “Below the Surface.” The video shows the SnotBot in action and explains how Intel’s advanced and sophisticated database brings Ocean Alliance’s research to a new level.

Mary Markos may be contacted at 978-338-2660 or mmarkos@gloucestertimes.com