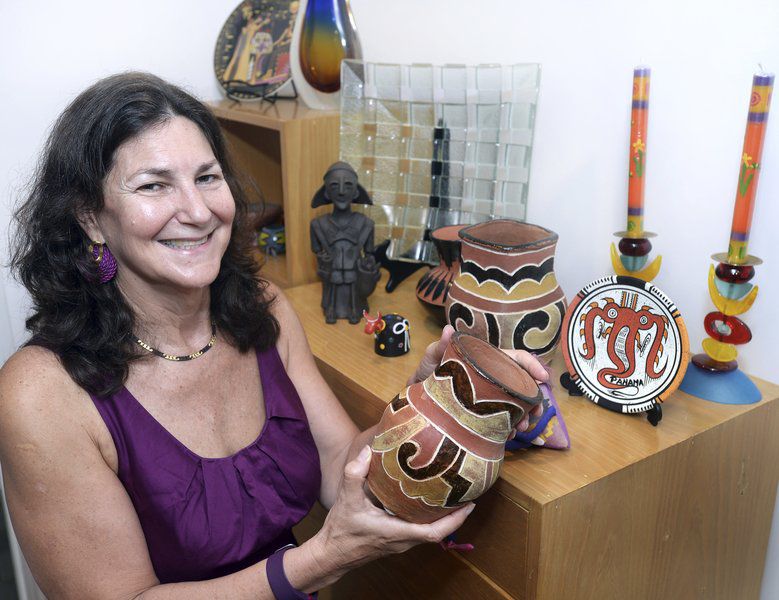 CARL RUSSO Staff photo. Dr. Ethel Schuster, a computer science professor at Northern Essex Community College, has spent quite a bit of time in Brazil. She taught at the University of Sao Paulo. She is holding art work from Brazil displayed in her home along with art work from Panama, Israel, and Ethiopian art work made in Israel. 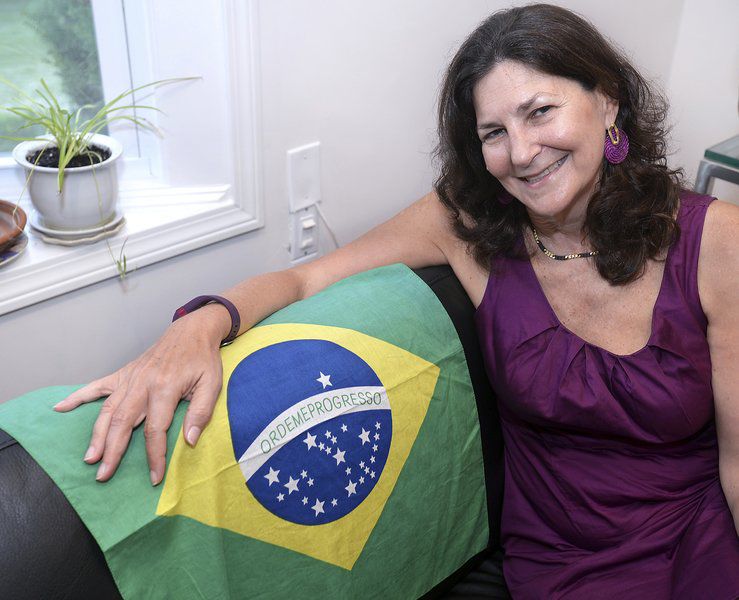 CARL RUSSO Staff photo. Dr. Ethel Schuster, a computer science professor at Northern Essex Community College, has spent quite a bit of time in Brazil. She has taught at the University of Sao Paulo.

CARL RUSSO Staff photo. Dr. Ethel Schuster, a computer science professor at Northern Essex Community College, has spent quite a bit of time in Brazil. She taught at the University of Sao Paulo. She is holding art work from Brazil displayed in her home along with art work from Panama, Israel, and Ethiopian art work made in Israel.

CARL RUSSO Staff photo. Dr. Ethel Schuster, a computer science professor at Northern Essex Community College, has spent quite a bit of time in Brazil. She has taught at the University of Sao Paulo.

ANDOVER — With the 2016 Olympics just having wrapped up in Rio de Janeiro, Brazil has drawn enormous attention lately.

By now, probably most Americans can identify the green, yellow and blue Brazilian flag, after watching thousands of fans waving those colors in the Olympic stadium.

A Northern Essex Community College computer science professor, Ethel Schuster, knows much about this huge country that takes up half a continent – and boasts the ninth-largest economy on the planet, according to the International Monetary Fund.

Schuster, of Andover, has worked on computational linguistics and taught scientific writing at the University of Sao Paulo. She and her husband, Haim Levkowitz, a computer science professor at UMass Lowell, went to Brazil for their honeymoon in 1984 and fell in love with the country. They spent two sabbatical years there, in 2004-2005 and 2012-2013.

They have been back often, except for this year.

Do they wish they were in Rio for the Olympics?

"Yes and no," Schuster said. "Rio is one of the most beautiful cities in the world." The immense, boisterous crowds can be nerve-wracking, she noted.

"No and no," said Levkowitz, who has long had a love for Brazilian music but is not a sports fan.

Schuster, a native of Colombia who came to the United States in 1977 to attend Brandeis University, and Levkowitz, who was born in Israel, have collaborated with colleagues from Brazil over the last 16 years. They have a special bond with Maria Cristina Oliveira, a computer science professor at the University of Sao Paolo (USP) who was a post-doctoral student at UMass Lowell; and her husband, Osvaldo Novais Oliveira Jr., the vice rector of the physics institute at USP.

This relationship led to Schuster doing research in computational linguistics and teaching scientific writing at the University of Sao Paulo at Sao Carlos. Brazilian scientists are eager to have their work published in scientific journals – but many of these publications are in English and the writers need help with the language, she explained.

Spelling amounts to 8 percent of the errors by Brazilian scientists who are writing about their research in English, she said. When and when not to use the definite article "the" is also a challenge for folks whose native language is Portuguese.

Schuster and Levkowitz love the friendliness of the Brazilian people. Their hosts not only provide them with a place to stay but also let them use their car, she said.

On top of that friendliness, Brazilians know how to party and how, she noted. Bahia boasts a seven-day carnival celebration of dancing and music.

"They have the time of their lives," Schuster said.

Then there's Carnaval in Rio, held just before Lent each year and considered the biggest party on Earth. Hundreds of bands, endless dancing, magnificently colorful costumes and parades mark this massive celebration.

The floats are especially entertaining, Schuster said. One float featured a Stevie Wonder theme, she said. Another had people swimming and diving into a pool.

"Every single person in the world should visit Rio de Janeiro and experience Carnaval, once in their lifetime" Schuster said.

While they love Brazil, Schuster and Levkowitz do not deny the negative aspects of the country. When they visit Brazil, they associate with people in the academic community, who are in the upper middle class.

"Some Brazilians have to work every single day to support themselves," she said.

The country's economy has grown impressively during the last few decades and Brazil's vast natural resources make it a potential superpower. Yet there are millions of Brazilians living in poverty, she noted. Crime is also a serious problem.

Schuster and Levkowitz found that out the hard way when they made their first trip to Brazil in 1984. They got mugged while riding a bus.

The mugger put a knife to Levkowitz's back and demanded his bag. Levkowitz felt like fighting, but did the smart thing and gave the crook his bag with all his camera equipment.

Brazilians have "no sense of black and white" and mixed-race couples are much more common in Brazil than in the United States, she said.

One is also much more likely to see tall women accompanied by shorter men in Brazil than in the United States, she added.

"I found that interesting," she said.

"Brazilians are happy people," Schuster said. "They are not confrontational. There is a sense of 'we can work it out.'"

Perhaps that is why Brazil has not fought a major war in more than a century, she suggested.

The Brazilian bureaucracy is a stumbling block to both the country's citizens and foreigners, she said. For instance, it usually takes 153 days to open a business in Brazil as compared to only six days in the United States, she said.

Schuster and her husband had a run-in with the bureaucracy during their first sabbatical visit. Because they have different last names, they had to drive several hours to the American consulate in Sao Paulo to get sufficient documentation in order to obtain identification cards for their two children for their yearlong stay in the country.

Yet their love for Brazil continues unabated.