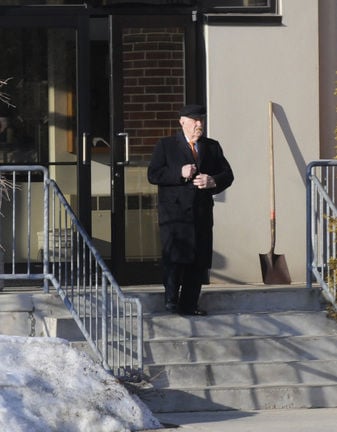 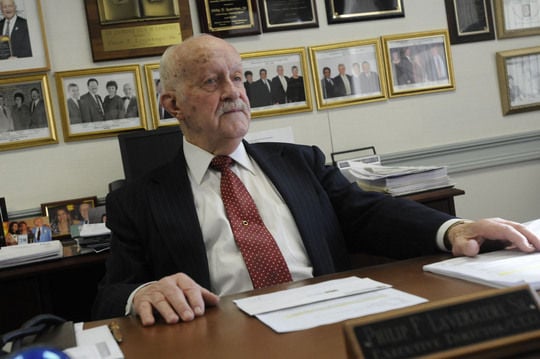 PAUL BILODEAU/Staff photo Philip F. Laverriere Sr., Director of GLCAC reacts to a reporter’s questions regarding his whereabouts during his regular work day during a meeting on March 15th. 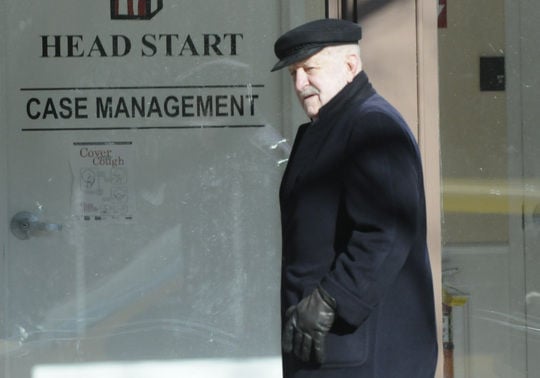 PAUL BILODEAU/Staff photo Philip F. Laverriere Sr., head of Greater Lawrence Community Action Council, spent most of 21 work days at the Elks lodge on Andover Street, instead of the office. Here, he is shown arriving for work at the agency on March 2 at 9:09 a.m. He left shortly after 12 p.m. for the Elks for the afternoon and several hours later headed home.

PAUL BILODEAU/Staff photo Philip F. Laverriere Sr., Director of GLCAC reacts to a reporter’s questions regarding his whereabouts during his regular work day during a meeting on March 15th.

PAUL BILODEAU/Staff photo Philip F. Laverriere Sr., head of Greater Lawrence Community Action Council, spent most of 21 work days at the Elks lodge on Andover Street, instead of the office. Here, he is shown arriving for work at the agency on March 2 at 9:09 a.m. He left shortly after 12 p.m. for the Elks for the afternoon and several hours later headed home.

LAWRENCE — Fighting poverty in the state's poorest community is supposed to be a full-time job.

But the head of the city's leading anti-poverty agency spends as little as 15 hours a week in the office. The remainder of his time is spent at the Elks Lodge on Andover Street, playing card games and video poker, enjoying long lunches, and indulging his taste for Romeo Y Julieta cigars, an investigation by The Eagle-Tribune has found.

Philip F. Laverriere Sr. has been executive director of the Greater Lawrence Community Action Council since 1974. Under his watch, the nonprofit agency has grown into a $30 million-a-year operation funded almost entirely by federal and state tax dollars.

He oversees 310 employees and a sweeping array of poverty programs, including child care, immigration assistance, heat subsidies and even a youth baseball league. The agency serves 35,000 people annually in Lawrence, Methuen and the Andovers.

Laverriere's salary has also grown over his 37 years with the agency. According to the last tax returns filed by the agency in 2009, Laverriere earned $144,641 between his salary, allowances and annual bonus.

Based on an anonymous tip, The Eagle-Tribune began observing Laverriere and found that between Jan. 28 and March 14, the 85-year-old spent 21 afternoons at the Elks Lodge No. 65, a chapter of a nationwide fraternal organization Lodge.

Typically, Laverriere showed up for work at the agency's headquarters on Essex Street within a few minutes of 9 a.m. and left work within a few minutes of noon for the 10- or 15-minute drive in his Cadillac DeVille over the Merrimack River to the club. He typically stayed at the club for two to five hours, then went directly to his home on Ames Street.

When confronted with The Eagle-Tribune's findings, Laverriere acknowledged his routine and said it has been going on for about three years. He said he makes up the time away from the office by going in on weekends.

"I come in on Saturdays, I come in on Sundays," he said. "Whatever is needed to do the job. When you see the checks I have to sign every week — they come in this high every week. I don't always get to them during a regular day because of other things that happen."

Laverriere said he would not tolerate an employee working his type of schedule.

"I wouldn't accept it from anybody else in the agency — I wouldn't," said Laverriere, who claims to be on the job 40 hours a week in the Form 990 tax forms he signs and the agency files annually with the federal Internal Revenue Service.

When asked why it is OK for him to spend most of his days at the Elks, Laverriere said, "I don't know. It's an honest answer. I don't know."

The monthlong observation of Laverriere ended last Monday, when The Eagle-Tribune requested an interview with him, as well as Assistant Executive Director Charles LoPiano and Finance Director Richard Robichaud.

LoPiano and Robichaud attended the 2 p.m. meeting. Laverriere did not.

"He had to go to the doctor — something happened to him," LoPiano said. When asked if Laverriere was OK, LoPiano replied, "Are any of us OK?"

Laverriere was OK. In fact, he remained inside the Elks, while the meeting continued on without him in the agency's headquarters.

Another request was made to meet with Laverriere in his office, but this time a morning meeting was requested. This time, Laverriere was there.

"You're going to make this a thing, saying the executive director only works part-time or whatever?" he said, as the 30-minute interview ended. "That's not very pleasant for me. So now, from here on in, I will make a change. If I go to the Elks club, I'll stay one hour and come back."

Thomas Schiavone, who has served on the agency's board of directors for 12 years and now chairs it, said the revelation that Laverriere has been working half days for three years was "alarming." He called the executive committee of the board of directors to a special session Friday to inform members that The Eagle-Tribune would be publishing this story. He canceled the meeting as word about the story spread independently. Instead, he said the board would discuss the issue at its regularly scheduled monthly meeting this Thursday.

Schiavone said there has been no discussion about offering Laverriere a severance package, but Laverriere said if asked to leave, he would demand one.

'No idea where he goes'

By the end of last week, Laverriere had reportedly hired a lawyer. But even as battle lines began to form between him and his board, Laverriere was at work Friday morning inside the building that was dedicated in his name in 2003.

The red-carpeted executive suite on the fourth floor is a tight cluster of offices that surround a wide central lobby. Laverriere shares the space with his four top staff members — LoPiano, Robichaud, Human Resources Director Christine Kuzmitski and Planning Director Maureen Mulcahy, as well as their secretaries.

Laverriere's corner office, which has a picture-window view of the city, can be seen from any of the other offices and by the two secretaries who sit just outside it.

LoPiano and Robichaud said they were unaware of Laverriere's daily trips to the Elks. Kuzmitski did not return phone calls. Mulcahy said she was instructed to refer calls to the agency's lawyer, Michael Morris, who would not comment.

"It's not unusual for us to go do different things, different days, different places," LoPiano said. "The agency runs. You have to manage and supervise it, but it runs."

"I have no idea where he goes when he leaves the office, to a business luncheon or one of the program locations," Robichaud said. "He's accountable to the board of directors, not me."

Three times while Laverriere was at the Elks club, The Eagle-Tribune called the agency or paid a visit to ask his whereabouts. On Jan. 28 and March 14, LoPiano said Laverriere had gone home sick or to a doctor's office. On Feb. 3, a secretary said he went home sick, but Laverriere's car was parked at the Elks.

Schiavone said the disclosure that the man who oversees the agency's daily operations has been working 15- or 20-hour weeks for three years does not suggest that the board's oversight of its top employee has been lax.

"I'm not a micro-manager," said Schiavone, who was chief of staff for former Lawrence Mayor Patricia Dowling and economic development director under former Mayor Michael Sullivan. "It's not my personality to go in and walk around the agency on a day-to-day basis to see who's in and who's not. I'm not the clock-watcher."

He added, "Every indication is that this agency is run extremely well. There have been no controversies, no rumors or investigations of inappropriate activity at the agency or misappropriation of funds. If you call the funding sources, you'd get the same answer."

How he and the agency works

GLCAC has only two major funding sources: the federal and state governments, which together provide $29 million of its $30 million budget. GLCAC funnels the funding to the 16 or so programs it administers, which return a portion of the funding to pay for the administrative services the parent agency provides. GLCAC this year will receive $1.6 million from the programs it oversees, of which $1.2 million will pay the salaries for its 16 administrators, including Laverriere.

Jennifer Kritz, a spokeswoman for Health and Human Services, said the agency has received no recent complaints about Laverriere or the programs he oversees. She said the agency would contact GLCAC about the allegations involving Laverriere's 15-hour work weeks.

"We take allegations of misuse of state funds very seriously," Kritz said. "We will certainly look into the concerns ... and take appropriate action."

Joseph Diamond, executive director of the Massachusetts Association for Community Action, did not return several phone calls seeking reaction. The agency provides training, resources and other services for 24 community action programs in the state and lobbies for them in Boston, but provides no oversight.

GLCAC is among the largest of the 24 programs across the state. The city at the core of GLCAC's service area — Lawrence — is Massachusetts' most impoverished municipality. Median household income in the city was $33,337 in 2009, the lowest in the state and nearly $20,000 below the national average, according to the U.S. Census. One in four Lawrence families lives in poverty. Unemployment is approaching 18 percent.

Into that massive need, GLCAC launches a life raft of social services. Among the biggest are Head Start, which serves 700 children in Lawrence, Methuen and the Andovers, and the Low-Income Home Energy Assistance Program, which recently doubled the aid it distributes to $9.1 million as economic stimulus money flowed in from Washington, D.C.

GLCAC's executive director oversees it all. The written job description says the executive director supervises personnel, develops rules and regulations to carry out daily operations, builds relationships with the public and governments, prepares financial statements and directs the operation of services, equipment and facilities.

Laverriere elaborated. He said his workday includes serving the executive board and the committees of GLCAC's board of directors, including going to their meetings. He said his day is expansive.

"How the hell can I explain what I do? It's so damn much," he said. "Everyday, I have to sign financial documents, supply request forms. There's so many things I do."

He said he also hosts business meetings, including at the Elks club. He did not elaborate, except to say that the meetings can involve a card game.

"Sometimes I meet with business people down there," Laverriere said. "We play 45s. You get wrapped up in it."