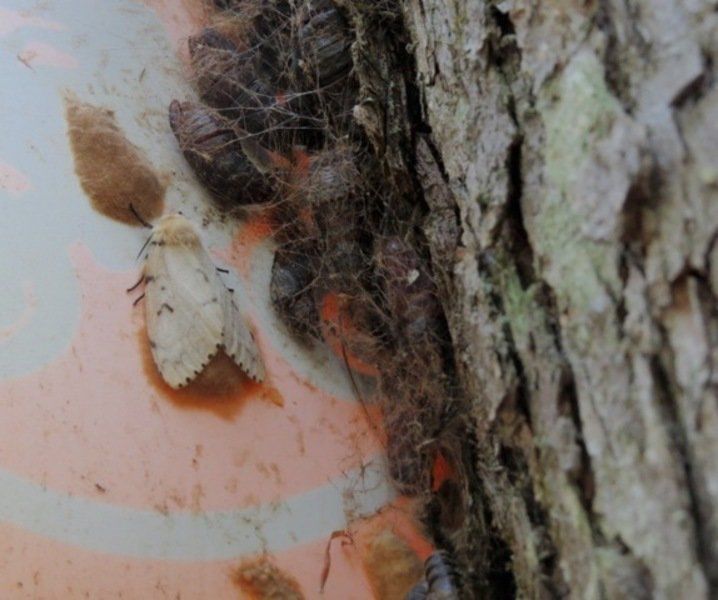 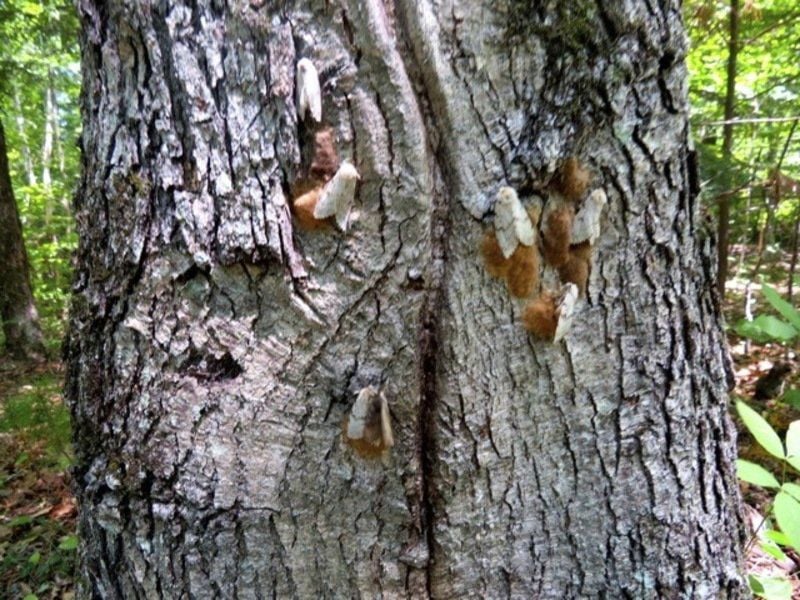 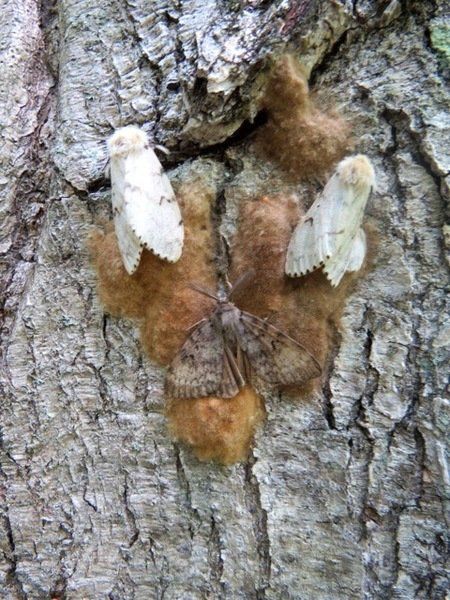 KINGSTON, N.H. — Evy Nathan was on a hike in the woods, taking in the fall views in the Valley Lane Forest area, when she noticed a far greater number of moths around her than normal.

She followed those she saw to their source, a brown-colored, fuzzy substance covering the trees. Returning home, she confirmed her suspicion — she had found egg masses of lymantia dispar, the gypsy moth.

She is not the only one to have encountered the moths, notable for their destructive appetites, in recent weeks. Rockingham County Forester Fred Borman also has discovered them hiding around the county.

“I had been contacted by the town of Windham about a big white tree in the graveyard, and it was loaded with them,” he said.

Gypsy moths, originally introduced to the United States when a few escaped from the Medford, Massachusetts home of French immigrant and amateur entomologist Etienne Trouvelot in the late 1860s, are today a widespread pest in the forests of the northeastern United States, according to the U.S. Forest Service. When they emerge as caterpillars, they feed on foliage, sometimes leading to massive defoliation of forests, which over years can be a mortal wound to trees.

Managing moths before its too late

“A major concern is the potential loss of economically critical and ecologically dominant oak species,” a favorite host for the insects, according the United States Forest Service’s gypsy moth website.

Worse yet, this year’s severe drought has prevented the growth of the moths’ main predator in several states and parts of New Hampshire. That predator is a fungus named entomophaga maimaiga, which needs wet, humid weather to spread. The resulting summer of rampant gypsy moths devastated parts of Rhode Island, Massachusetts, and Connecticut. Nathan fears that that environmental damage may come north in the Spring.

“As of now with two dry years, we’re in position for a looming major infestation,” she said.

Nathan, who serves as chairperson of the Kingston Conservation Commission, knew the next steps she wanted to take, especially given the fact that the insect’s natural predator, a fungus that preys on gypsy moth caterpillars, struggles to grow in dry seasons.

"(There) were way more than usual, so I contacted Fred right away,” she said.

Borman visited the Valley Lane area after Nathan told him she had encountered the insects there.

“I took a walk a few days later in (Valley Lane Forest) on the Red Trail I think, and I noticed that there were a few oak trees defoliated, and there were gypsy moths in the trees.”

The Kingston Conservation Commission invited Borman to address the issue and a plan of action at an Oct. 6 meeting of the KCC.

Borman explained to the commission that the moths are very difficult to dislodge.

“The problem occurs in the forest, and there’s really not a cost effective way,” he said of methods of cleaning out the moths.

The insects are also capable of migrating from forest to forest across roads, he noted, which may be an issue for the towns nearby to Valley Lane Forest such as Plaistow and Hampstead.

“They will travel across a road to get from one tree to another,” he said.

Counting begins in the spring

The moths live on a 10-year cycle, he explained, peaking in the third year before a virus that attacks the insects leads to population collapse. This year is still part of the lead up to the peak, he added.

The severity of the infestation in Connecticut when he worked there in the late ‘80s, Borman said, was so great that swathes of forest were populated by more insects than leaves.

“I can still smell it — when they all died, it was that bad.”

Borman added that homeowners can protect specific ornamental trees with prescribed chemicals, as one Christmas tree farmer in Fremont was able to do last year, and some other trees can be saved by creative use of burlap. At the same time, he cautioned against the use of BT, Bacillus Thuringiensis, a popular pesticide, because it prevents the population from collapsing under its own weight when the virus takes hold.

“My own personal view is we should let it run its course, because if you spray the BT you’re extending the cycle,” he said.

Still, with so many factors at play over the winter, in which freezing conditions can kill the eggs, predictions about spring weather — and whether droughts will continue — are difficult to make.

Kyle Lombard, program coordinator at the Forest Health Section of the New Hampshire Department of Forests and Lands, believes people should take caution when determining the viability of the moth eggs.

“People should make sure to note the difference between old, parasitized masses and pupae versus new ones,” he said. “I haven’t seen any new egg masses that would support a major outbreak.”

Lombard explained that this year the state saw limited defoliation compared to Connecticut and Rhode Island, and while he would expect more moths next spring, it’s very difficult to predict how severe it may be.

“We don’t even begin counting them until spring — mice eat them, birds eat them, so many things prey on them that doing a count in the fall (often) doesn’t correlate to the spring,” he said.

He added that the fungus that preys on the moths must have had great success over the summer and spring, getting just the appropriate amount of rain. Until the spring, he concluded, it will be very difficult to know how many moths will hatch.

Borman said that he had been in touch with the Forest Health Section and the section, he said, would be putting out updated information to help homeowners defend their trees over the next few months.

People across the state have been hoping for more rain for all kinds of reasons, with fighting off a moth infestation being yet one more cause to look up to the sky with fingers crossed.

“Do a rain dance and pray for a wet spring,” Nathan said.