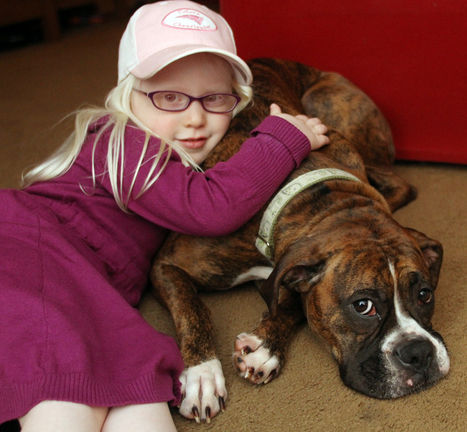 Kalli Roy with Olivia, one of her family’s two boxers. Roy was born with albinism. 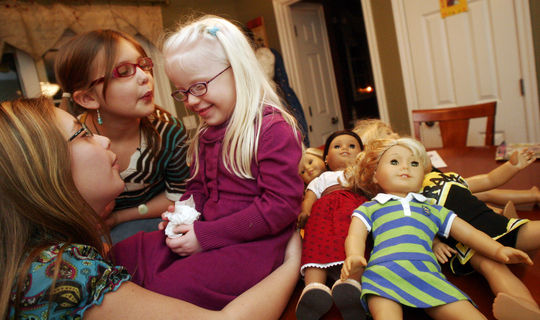 Kalli Roy, 4, of Salem, right, has albinism. Her sisters Kaila Roy, 10, left, and Kiana Roy, 8, center, are rallying to get an American Girl Doll modeled after her. ALLEGRA BOVERMAN/Staff photo

Kalli Roy with Olivia, one of her family’s two boxers. Roy was born with albinism.

Kalli Roy, 4, of Salem, right, has albinism. Her sisters Kaila Roy, 10, left, and Kiana Roy, 8, center, are rallying to get an American Girl Doll modeled after her. ALLEGRA BOVERMAN/Staff photo

SALEM — Kalli Roy's two older sisters have American Girl dolls customized to look just like them. But getting one for Kalli is more difficult than picking out the right facial details from the doll catalog.

Kalli, 4, has albinism, an inherited genetic condition that means she has little or no pigment in her eyes, skin or hair. Her eyes appear violet and her vision is impaired, but that didn't stop her from sprinting around her house one recent evening.

Her sisters, Kaila, 10, and Kiana, 8, got the idea to ask the American Girl company to make a doll that looks like their sister. But their request isn't just so their sister could have a familiar toy.

The dolls come with books telling the tales of pre-teens from various points in history through the modern day. The girls hope a "Kalli Frances" doll and book would educate those who sometimes stare at Kalli or make mean comments.

At a summer camp, Kiana and Kaila were playing with a boy they had just met. They asked if he wanted to play with their sister, too.

"Did I cry?" Kalli asked, from the other side of the table.

Kiana told Kalli she didn't cry, because she hadn't heard the exchange.

"What do you say when people stare at you or say bad things?" the girls' mother, Tricia, asked Kalli.

The girls decided to contact American Girl on their own, Tricia Roy said, and the company urged them to send in a letter about their little sister. But Kaila and Kiana had bigger ideas.

"We didn't want to just send in two or three letters from the family," Kiana said.

So, the two of them approached their principal at Lancaster School to see if they could ask fellow students to write letters. The school went above and beyond, Tricia Roy said, bringing in guidance counselors to talk to each class about albinism and then letting students write letters to the company during lunch. Kalli went to the school that day to answer questions from students.

"We had over 40 letters from the school and staff," Kiana said.

Tricia Roy also posted the girl's mission on Facebook and message boards for people with albinism, their families and friends. She has received letters from people nationwide and even outside the country.

"Everyone stares at Kalli and if we make an American Girl doll, it'll help them answer the questions that they're too afraid to ask because they think they're too personal," Kiana said.

But the doll could help people understand that Kalli is, with some slight help, able to live like any other 4-year-old. She uses a walking stick, and has to wear sunblock and sunglasses whenever she's outside.

But she goes to the beach with the help of a full-body bathing suit and a sun hat, and can run throughout her own home because she's memorized where everything is.

"She's smart as a whip and runs through life like any 4-year-old," Tricia Roy said.

She dances and is learning gymnastics from Kiana. She also is learning to play the piano.

"She played "Jingle Bells" in the Christmas recital," Roy said.

Just seconds later, Kalli was gone in a bright blur and "Jingle Bells" was coming from the piano a few rooms over. That's the Kalli her sisters want people to know — a girl who can do just about anything and is fun to be around, rather than some of the preconceived notions about albinism.

"All the movies that have a person with albinism, they show them being evil," Kaila said.

And for Kalli, who uses the term "sunglass kid" rather than albino to describe herself, the idea of having a doll like her is a pretty great one.

As her mother asked what a Kalli Frances doll would come with, Kalli ticked off some of her own accessories: a bright yellow dress, sunglasses, a walking stick, "a bathing suit like mine and beach socks."

Father Dave said his daughters are like second mothers.

"What's really nice is they include her in everything," he said.

And their mother has already told the girls it isn't about the end result. Even if the doll never gets made, they've already raised awareness in their school and in their community, among the people Kalli will know as she grows up.

That will help make Kalli's interactions with people easier, Tricia Roy said, even if it doesn't completely cure ignorance as they've hoped.

"What they're asking for from the world, I don't know if it'll ever really happen," Tricia Roy said. "But just knowing they think it's possible is enough for me."

Letters in support of the doll can be e-mailed to vote4kalli@gmail.com.

Salem, NH - Anita D. Poirier, 97, of Salem, N.H., passed away on Saturday, September 26, 2020, at home surrounded by her loving family. She was born in Lawrence, Mass., the daughter of the late Benjamin and Genevieve (Perry) LeBlanc. Mrs. Poirier grew up in Andover, Mass. She worked for Tire…