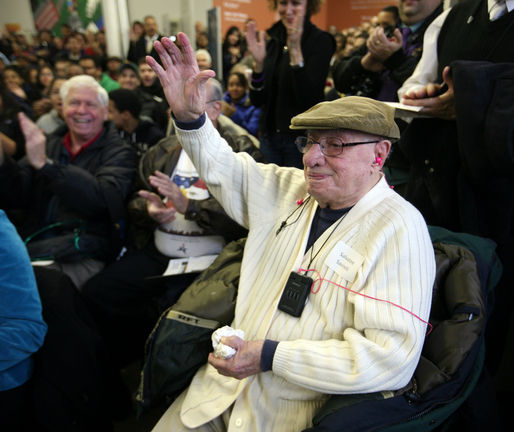 File photo Salvatore Savinelli, 104, waves to the crowd as he is recognized during the commemoration of the 100th anniversary of the Bread & Roses Strike on Jan. 12. 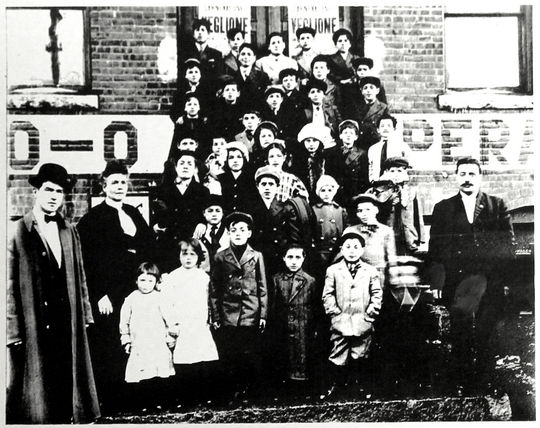 The children sent from Lawrence to Barre, Vt., stand on the steps of the Socialist/Labor Hall. Salvatore Savinelli, then 4, is believed to be the blurred face at right front, standing next to his father, Angelo Savinelli, far right.

File photo Salvatore Savinelli, 104, waves to the crowd as he is recognized during the commemoration of the 100th anniversary of the Bread & Roses Strike on Jan. 12.

The children sent from Lawrence to Barre, Vt., stand on the steps of the Socialist/Labor Hall. Salvatore Savinelli, then 4, is believed to be the blurred face at right front, standing next to his father, Angelo Savinelli, far right.

LAWRENCE — When Salvatore Savinelli was just 4 years old, he hopped on a train bound for Barre, Vt., with 35 other children and his father as the group made its way out of the city in the midst of one of the biggest strikes in U.S. history.

It was 1912 and Savinelli, now 104 and living in a Methuen assisted living center, still recalls many of the details of that historic time as if it were yesterday.

Sully, as he's known by friends and family, may be the last living link to the Bread and Roses strike, which took place during a tumultuous two-month period from January to March 1912.

Last month, he sat proudly in his wheelchair as politicians and schoolchildren alike fawned over him like he was some kind of rock-star during the city's opening celebration marking the 100th anniversary of one of the seminal events that shaped the modern American labor movement.

When 25,000 people walked out of the dozens of mills throughout Lawrence over a pay dispute on Jan. 12, 1912, it marked the beginning of what would eventually lead to the abolition of child labor, creation of a 40-hour workweek, and better pay and working conditions for millions of Americans, many of them recent immigrants, toiling away in the country's manufacturing plants.

Two of the people who walked off their jobs that day were Angelo and Maria Laurenza Savinelli. According to an oral history transcribed by family friends Barbara and Bob Innes of Andover, Angelo worked in the Ayer Mill while Maria worked in the Wood Mill. They were both so-called "gill box workers."

They would run "from machine to machine, watching for breaks in the wool thread, tying the ends when breaks occurred, or when the machines stopped to permit placement of new balls of wool," Sully told Barbara Innes back in 2002.

It was difficult and demanding work, and as the strike of 1912 loomed, mill owners were pushing employees to work harder and faster, for less money.

Angelo, educated in Italy, became a sought-after speaker and eventually became a prominent member of the Strike Committee, he said. During the strike, he managed a store and bakery that gave food to striking workers on credit since they had no money to pay for the basic necessities for survival.

That was one of the factors that led organizers and strikers to agree in mid-February to begin shipping children out of Lawrence to places like New York City, Philadelphia, and Barre, where they would be cared for under better circumstances by friends, family members and other union workers.

On Feb. 10, the first wave of about 150 children was shipped off to New York City, where they were greeted amid much fanfare, with a parade and marching bands, according to a history of the strike, "Bread and Roses," penned by Bruce Watson.

The children's departure, as well as their arrival in New York City, was well-chronicled by newspaper reporters and photographers, and their images and stories were splashed all over what at the time was considered the primary mass media in the country, according to James Green, professor of History and Labor Studies at the University of Massachusetts Boston.

One image published in New York City showed the arrival of the children at Grand Central Station with a marching band and carrying banners saying they were against child labor.

"This had never been done at other strikes," Green said. "Kids were holding banners, saying, 'We come from Lawrence to find a new home' or 'Some day we shall remember the exile.'"

About a week later, more trainloads of children left the city, some bound for New York, others for Barre, including Savinelli and his father. Sully said he doesn't remember the specifics of the train ride, but an image taken of the group in Vermont shows the children standing on the steps of the Socialist/Labor Hall there on Feb. 15, with Angelo Savinelli on one side. Standing next to him is a blurred image of a young boy, believed to be Sully, who moved his head at just the wrong moment, according to Jonas Stundza, a local historian who recently spent several hours with Savinelli, recounting his recollections of the strike.

While he doesn't remember the trip to Barre, he does recall many other details of the strike, or perhaps he recalls the stories handed down through the years by his family.

"During the strike, his house was a soup kitchen," Stundza said. "They lived near the Everett Mill."

He told Stundza that he remembered throwing pieces of coal at the militia members as they prowled the streets trying to corral striking workers, and then running back in the house when soldiers pointed their bayonets at them.

Some of the biggest names of the strike were visitors to his house, including Ettor and Arturo Giovannitti, organizers wrongly accused of murder and inciting a riot during the unrest.

The so-called "children's exodus" continued, culminating in a riot at the train station on Feb. 24 when the militia attempted to keep children from getting on a train. The result was that police allegedly used batons against women and forcibly threw children off the train platform, according to Watson's account, based on news clippings and other sources.

The riot at the train station, and subsequent Congressional hearings on the treatment of women and children during the strike and in the mills before the strike, marked a turning point, eventually forcing mill owners to concede to the wishes of the workers as public opinion turned against them.

Green, of UMass-Boston, said using the children to tug at the heart strings of America was brilliant.

"The idea of saving the innocents from violence, the campaign to move children and then to publicize it, was a stroke of public relations genius," he said. "It was very well thought-out in terms of winning the hearts and minds of the public."

Savinelli went on to have a successful career at AT&T, where he worked for 30 years before retiring, according to one of his caregivers at Methuen Village, Paula Frew.

Innes said Sully and his family often talked about the incidents that transpired during that two-month period of the Bread and Roses strike.

"He's still proud of what his father did," she said.