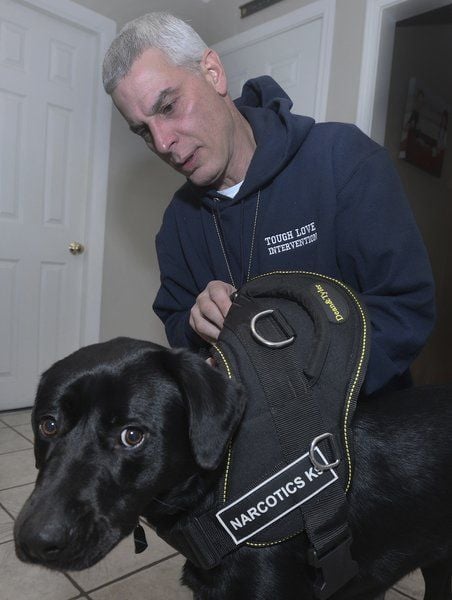 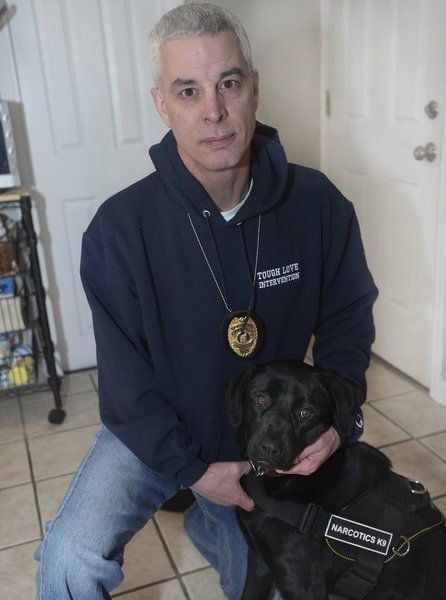 LAWRENCE — Kevin Drouin, a teacher by profession, says he wants to help put a stop to the opiate crisis.

He may have come up with a novel way of achieving his goal. Drouin, 46, of Lawrence, purchased a black Labrador retriever and had her trained to detect heroin, cocaine, crack cocaine, ecstasy, marijuana, hashish and other illegal and dangerous drugs.

A drug user, however, will most likely hide the narcotics in a very secure place. A dog, whose sense of smell is much, much better than a human's, can detect the presence of drugs by sniffing.

So you contact Drouin, he comes to your house with Moxie, his narcotic-detecting dog, and the canine starts sniffing around.

"The physical search is done by the client," Drouin said, adding that he is not affiliated with any law enforcement agencies. If Moxie picks up a scent and a bag of heroin is found, it's up to the client to decide what to do about it, Drouin said.

Some folks might ask, why not ask the police to use one of their canines to check for drugs in your home?

"The police will not do that," Drouin said.

Reading about the skyrocketing number of heroin overdose deaths prompted Drouin to take action, he said.

"When you read an obituary about a young person who 'died unexpectedly,' you can't help but think it was a heroin overdose," he said.

Right now, there are not many civilian canine drug detection teams, Drouin said. The only other civilian with a drug-sniffing dog in New England is Thomas Robichaud, with whom he trained, he said.

Drouin and Moxie trained together in Missouri. He is doing business as Tough Love Intervention and can be contacted at 978-337-0925 or kdrouin@msn.com.

He said he expects to have a website up and running by January.

Drouin has been a teacher for the past 21 years. He taught in Lawrence for five years and in Stoneham for the past 16 years.

He was a middle school social studies teacher.

He said he's taking a year off from teaching to pursue his new line of work as a handler for a drug-detecting dog.

Hiring Drouin and Moxie to do a drug sweep involves a written contract, he pointed out. Drouin said he observes strict confidentiality.

While Drouin hopes to make a living in his new venture, he said he and Moxie will provide their services at any veterans facility free of charge.

Drouin told the following story to show how powerful a dog's sense of smell is. During his training in Missouri, he and his fellow students learned about a dog that picked up the scent of a corpse that was under 50 feet of water, he said.

"A dog can detect a drop of blood in five gallons of water," he said.

Drouin was born and raised in Lawrence. He and his wife Melissa live in South Lawrence with their four children. He noted that many people from Maine and New Hampshire come to Lawrence to buy drugs.

"When you see the cars with the Maine and New Hampshire plates, you know they're not here for a friendly visit," he said. "It's an epidemic!"