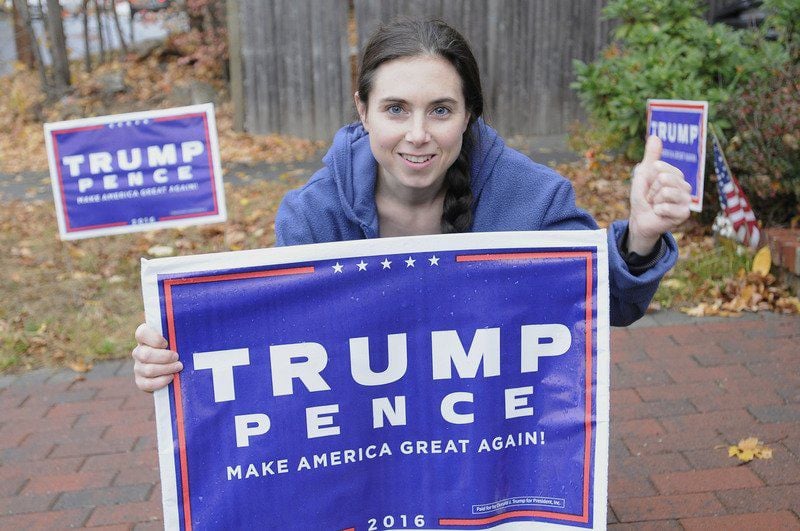 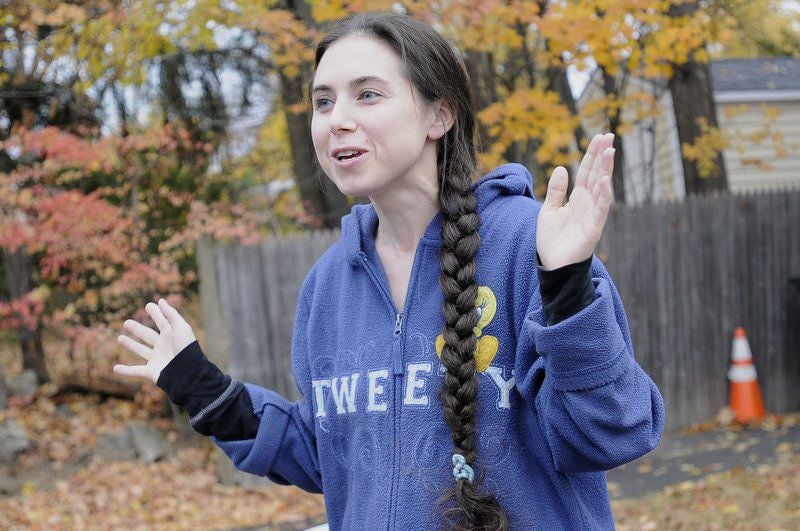 TIM JEAN/Staff photoHaverhill resident Breanna Hernandez, a mother of seven children, expresses her satisfaction with the results of the presidential election. 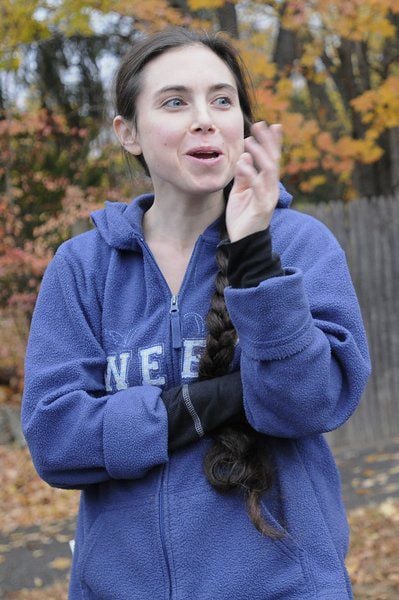 TIM JEAN/Staff photoHaverhill resident Breanna Hernandez, a mother of seven children, expresses her satisfaction with the results of the presidential election.

In Haverhill on Wednesday afternoon, Deanna Hernandez stood in the light rain outside her house, the front lawn speckled with Donald Trump signs. She was waiting for her kids to get off the bus.

"We were jumping up and down," said Hernandez, recalling watching TV with her husband at 2:30 a.m., as Trump reached the necessary number of electoral votes and it became clear he would be the 45th president of the United States.

Hernandez has seven kids; the oldest in middle school. She is studying history at Southern New Hampshire University and her husband works in telecommunications.

She said wage stagnation and rising health care costs – their bills just went up by $200 a month – have been stifling the family.

Co-opting sentiments from Democrat Hillary Clinton's campaign, she said she hopes her husband can "break the glass ceiling" at work and get a better job soon.

Trump was always her candidate, even before he announced his presidency. He used to call Fox News, and she liked what he had to say.

"I want to see him reform the tax code, and get rid of Obamacare," she said.

Hernandez said she doesn't believe comments Trump made about women and people of color represent who he will be as a president.

But for some local mothers not as enamored with the Republican president-elect, his comments were enough to repulse and frighten them on a personal level.

"The news makes me incredibly fearful of the world with which I am about to bring in a new child," said North Andover resident Julie LeBlanc, the mother of a 2-year-old girl and pregnant with her second child. "That so many people could look past his hateful words and elect him to run our country makes me sincerely second guess our ethical values."

LeBlanc, a speech language pathologist in public schools, said she has been more outspoken on the day after the election than in the past, and that the results have compelled her to keep a closer eye on the changes he plans to make.

"I've always felt that whether I agreed with the outcome or not, our presidents were qualified to handle their position of power. ... I do not have that confidence anymore."

As for her children, she said she will continue to reinforce that her daughter is "a smart, kind, loving girl, that is capable of whatever she puts her mind to."

Just as the election persuaded LeBlanc to be more vocal about her opinions with colleagues and friends, it compelled Michelle Filleul to be more politically active.

"My goal is to reach out to organizations that will be affected by this presidency, and to help them," the North Andover resident said. "I have been politically engaged, this just makes me realize I need to do more."

Filleul said she plans on reaching out to organizations that support causes she believes will be in jeopardy with a Trump presidency: "gun control, climate change, women's rights."

"I think our elected officials need to help unify, and stop using inflammatory language," Filleul said. "I plan to start small and teach my daughters to be compassionate."