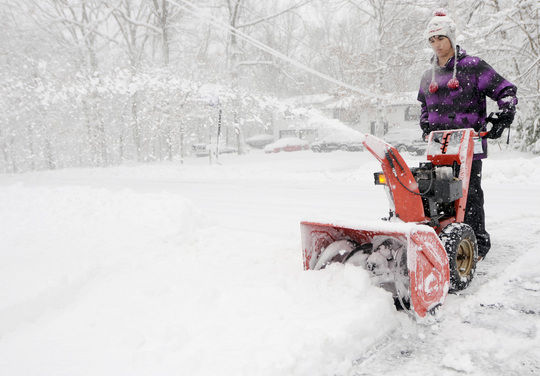 TIM JEAN/Staff photo Steve Martinelli, 16, clears snow from away from his grandmother’s driveway on Overledge Drive in Derry. 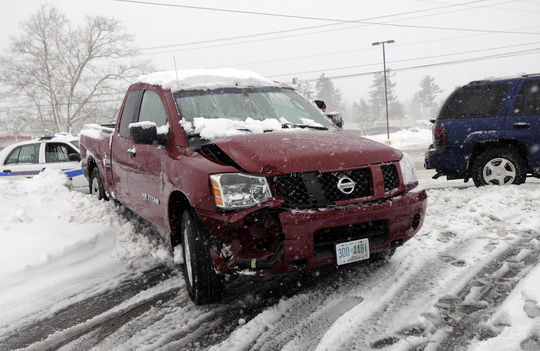 A Toyota pickup collided with two SUVs on Route 102 in Londonderry yesterday afternoon. The driver of the pickup truck was taken to the hospital. The late-season snowstorm caused multiple small accidents all across Southern New Hampshire. 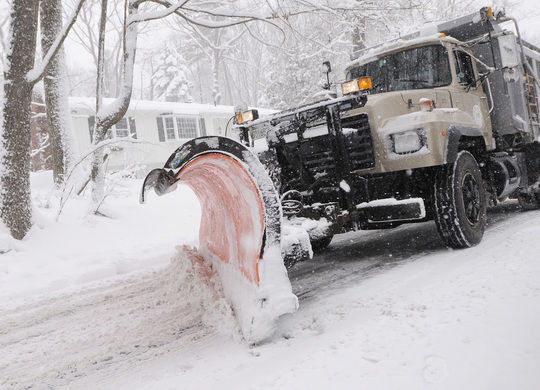 TIM JEAN/Staff photo Steve Martinelli, 16, clears snow from away from his grandmother’s driveway on Overledge Drive in Derry.

A Toyota pickup collided with two SUVs on Route 102 in Londonderry yesterday afternoon. The driver of the pickup truck was taken to the hospital. The late-season snowstorm caused multiple small accidents all across Southern New Hampshire.

The first heavy snowfall of 2012 caused a lot of problems for New Hampshire drivers yesterday, but local residents coped with the difficulties.

The storm dropped snow steadily on Southern New Hampshire Wednesday afternoon and all day yesterday, according to local amateur meteorologist Ryan Breton. He said the total snowfall as the storm slowed last night was 10 inches in Atkinson.

"In Southern New Hampshire, most totals were in between 9 and 13 inches," the Atkinson resident said. "In northern Massachusetts, totals were between 5 and 8 inches. There was a really sharp difference in the temperature in just the 10 miles between Atkinson and Lawrence. In Lawrence, the temperature went above freezing for a time and, as a result, the snow didn't accumulate as well."

The storm made for difficult travel yesterday, causing a lot of minor accidents, but with no reported injuries. Along Interstate 93, traffic was at a standstill in both directions at 8:30 a.m. after minor accidents clogged the highway.

Signs warned motorists the speed limit had been lowered from 55 to 45 mph, but drivers crawled along at 25 mph as sleet coated the road.

In Kingston, resident Troy Porter lost control of his car and crashed into a fire pond on Church Street at 1 a.m. yesterday, according to police Chief Donald Briggs.

Plaistow Deputy police Chief Kathleen Jones said there were about nine minor accidents during the storm and Hampstead police Chief Joseph Beaudoin said they had about six small accidents.

In Londonderry, 17 cars went off the road between 6 a.m. and early afternoon, police Lt. Timothy Jones said. At least five vehicles received minor damage, he said. A tow truck had to be called in for a garbage truck that drove off Royal Lane.

"Sometimes when it snows like this, it can get pretty busy," Jones said.

It was also a busy day for local plow crews, who were hard at work not long after the first flakes started to fall Wednesday afternoon. They didn't stop, rotating throughout the night and all day yesterday.

In Salem, Public Works director Rick Russell said the town had 72 vehicles either plowing or spreading sand and salt. By early afternoon, travel on local roads had significantly improved.

"The tough stuff is scraping down nicely," he said.

"We had approximately 450 customers out in the Exeter and Kingston region," he said. "From that point on, it was just chasing small outages, a few pockets of customers here and there. We brought in some third party contractors to handle the storm."

Some people picked up snow shovels at Bridge Street Hardware in Pelham yesterday.

"We have sold quite a few shovels," employee Zachary Thibault said. "That's how a lot of people are — they wait until the last minute."

The store had just started putting out spring supplies when the big storm hit.

For those who thought the recent warm weather meant spring was on the way, think again.