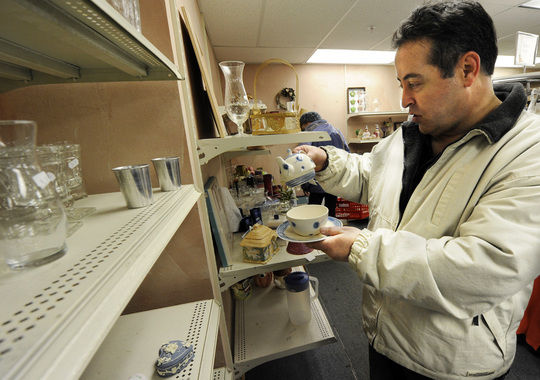 Bobby Aguirre, 44, of Derry looks over a tea cup while shopping in the thrift shop at the Marion Gerrish Community Center in Derry yesterday. 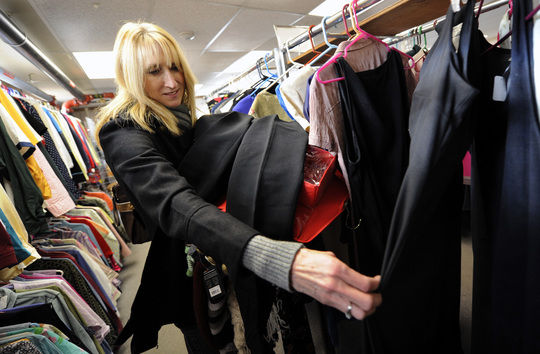 Laurie MacCall of Chester looks over a dress while shopping in the thrift shop at the Marion Gerrish Community Center in Derry yesterday.

Bobby Aguirre, 44, of Derry looks over a tea cup while shopping in the thrift shop at the Marion Gerrish Community Center in Derry yesterday.

Laurie MacCall of Chester looks over a dress while shopping in the thrift shop at the Marion Gerrish Community Center in Derry yesterday.

Bathing suits and shorts are on display at many clothing retailers, harbingers of warmer days ahead.

But thrift shops across Southern New Hampshire, too, are getting ready to put away the winter coats and break out the T-shirts and sundresses.

"We change everything in here to summer clothes," she said. "We have no extra space for all seasons."

The store sells clothes, shoes and jewelry in Hampstead Public Library's small basement. To get rid of winter inventory, the store has a half-price sale from March 8 to 19.

"We close for two weeks to organize and bring out the spring and summer clothes," David said.

Hollyhock starts accepting spring donations on April 1 and then reopens on April 5, showcasing the new influx of seasonal clothes.

Jane Driscoll, vice president of philanthropy and public affairs at Goodwill, said the Londonderry store changes things around as the seasons change.

"We stock with what we get, so it depends on what the community gives us what's in our stores," she said. "They'll move warm things to the back as the weather gets nicer; you won't see coats front and center."

She said Goodwill used to put the coats away for the season, but it became too much work to keep up with traditional retailers. She said the store usually has to wait until spring to see a lot of new donations.

"February and March are quiet times of year, but people start to clean out their closets by spring," she said. "The Londonderry community is so generous. The store has one of the highest donation rates in the area; it's always full."

Mary Ann Lombardo, manager of the Marion Gerrish Thrift Shop in Derry, said the clothing doesn't really change much for the season.

"We put things out as they come in," she said. "So, right now, we have winter as well as summer and spring; everything is out there."

She said the store's real challenge is the lack of donated household goods like dishes and knickknacks.

"We get plenty of clothes, it's the household items that we need," Lombardo said. "I think people have more yard sales or sell the items on Craigslist or eBay. People think they can make more money. Some people realize it's a pain and end up donating to us instead."

Brenda Magri of Derry said she shops at Marion Gerrish because of the prices. And she said she will buy a winter coat in the summer if she sees a good deal.

Gail Daley of Raymond shops at the Goodwill in Londonderry.

"I hate the mall and it's a great alternative," she said. "It also helps the environment. I donate clothes, so each time I try to bring something in and take something out. I don't do eBay or Craigslist. It takes the fun out of shopping."

Judi Crowley, a volunteer at Hollyhock, said the quality of the clothes is really high for the price.

Hampstead residents donate all the clothes and 100 percent of the proceeds from sales go to the Hampstead Public Library.