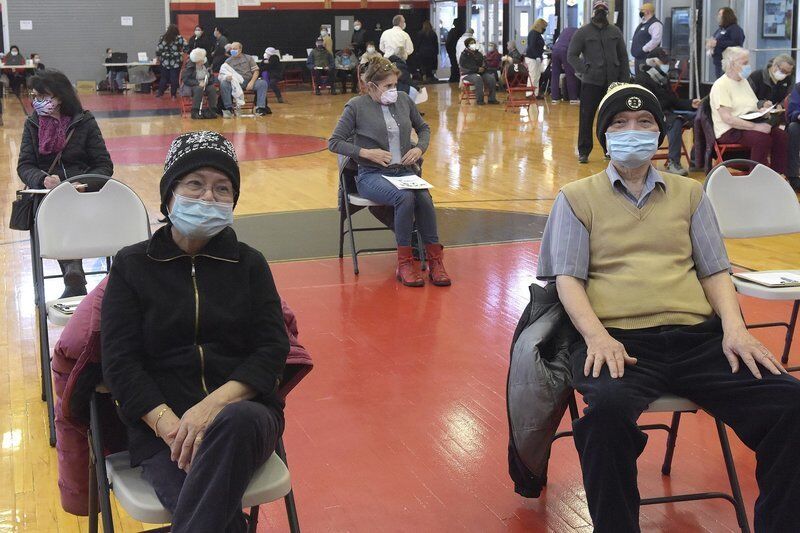 TIM JEAN/Staff photoHijyen Nguyen, 72, left, and her husband Nha Pham, 78, of North Andover, wait for 15 minutes after receiving their COVID-19 vaccine in case of side effects during the Greater Lawrence Family Health Center vaccination clinic at the North Andover Youth Center on Saturday. Gov. Charlie Baker announced last week that there will be 20 equity program communities — locally Methuen, Lawrence and Haverhill. This means towns like North Andover will no longer be allowed to hold local clinics. 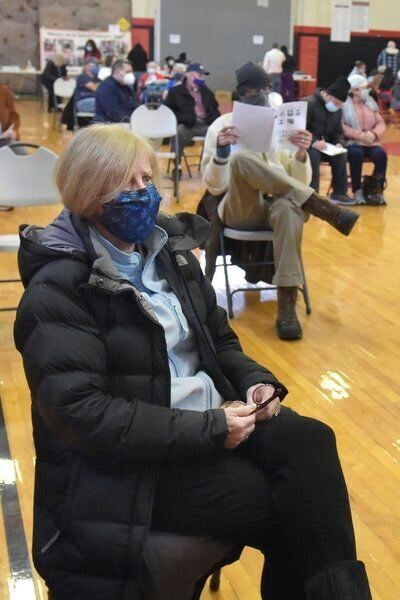 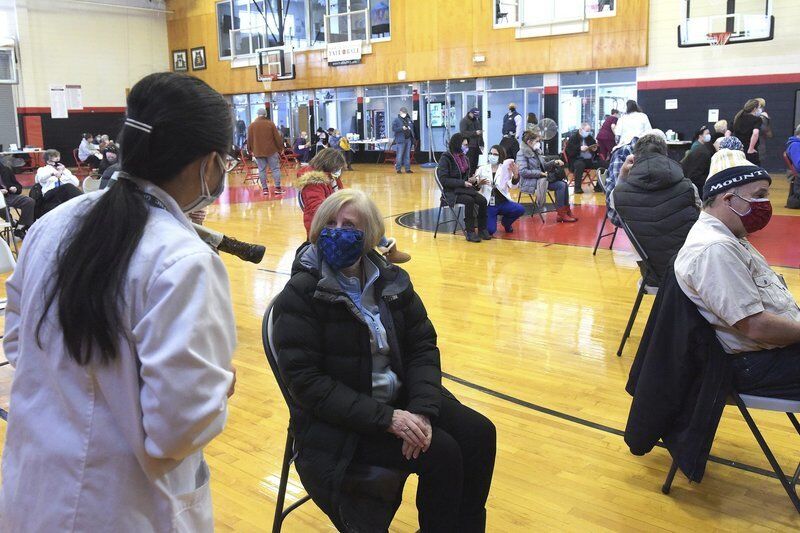 TIM JEAN/Staff photoIn center, Susan Miller, 72, of North Andover, listens to a nurse as she waits 15 minutes after receiving her COVID-19 vaccine in case of side effects during the Greater Lawrence Family Health Center vaccination clinic at the North Andover Youth Center on Saturday. 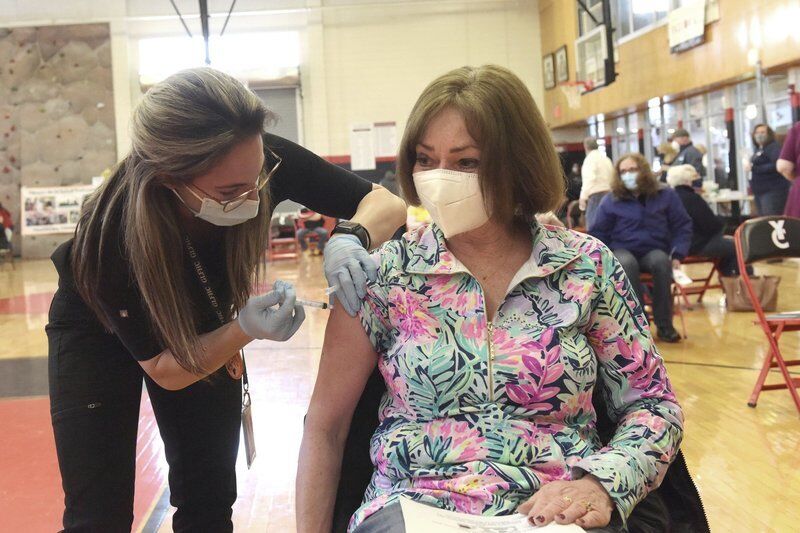 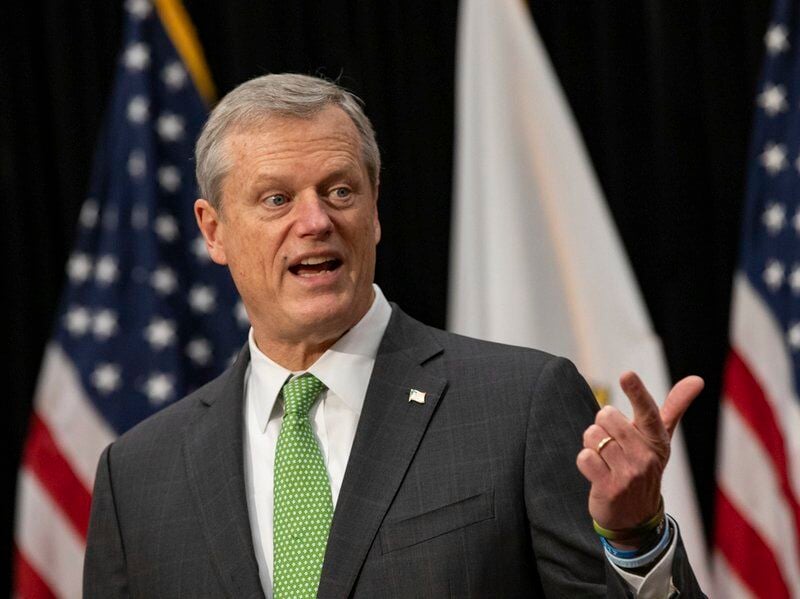 TIM JEAN/Staff photoHijyen Nguyen, 72, left, and her husband Nha Pham, 78, of North Andover, wait for 15 minutes after receiving their COVID-19 vaccine in case of side effects during the Greater Lawrence Family Health Center vaccination clinic at the North Andover Youth Center on Saturday. Gov. Charlie Baker announced last week that there will be 20 equity program communities — locally Methuen, Lawrence and Haverhill. This means towns like North Andover will no longer be allowed to hold local clinics.

TIM JEAN/Staff photoIn center, Susan Miller, 72, of North Andover, listens to a nurse as she waits 15 minutes after receiving her COVID-19 vaccine in case of side effects during the Greater Lawrence Family Health Center vaccination clinic at the North Andover Youth Center on Saturday.

Gov. Charlie Baker stepped to the podium to offer hope to a million more Massachusetts residents Wednesday at his latest press conference. Those over 65 or people with two medical conditions putting them at risk for COVID-19 are finally eligible to receive the vaccine.

However, with that same hope came confusion for local boards of health, as the state also quietly announced plans to shutter local vaccination clinics starting March 1. The plan, according to the Baker-Polito Administration, is to funnel eligible residents to mass vaccination sites such as Fenway Park, Gillette Stadium and the DoubleTree Hotel in Danvers, instead of allowing residents — most of whom are seniors — to stick closer to home.

This has caused problems for some seniors, who find the prospect of navigating these large sites intimidating. A group of 40 legislators — including local state Reps. Christina Minicucci and Marcos Devers and state Sen. Diana DiZoglio — wrote in a letter to Baker on Thursday in protest of the plan.

“These mass vaccination sites are inequitable for seniors, who have encountered obstacles in every step of the process,” according to the letter. “Instead of halting the ability of our communities to vaccinate their most vulnerable populations, we should prioritize the local infrastructure.”

According to a memo sent to local boards of health by state Secretary of Health and Human Services Marylou Sudders, the cities of Lawrence, Haverhill and Methuen are three of 20 municipalities shown to have the greatest COVID-19 burden and the greatest percentage of non-white residents. As a result, local vaccine clinics in those three cities will continue to operate and receive other benefits, including being assigned a state liaison to assist with “increasing awareness, address vaccine hesitancy and to mitigate barriers to vaccine access,” according to Sudders.

It is unclear if the local clinics in equity cities, should they be allowed to remain open, will be for residents of those cities only, or if residents from other cities would be welcome.

The overall result is confusion and unrest among local officials, regardless of how their city or town factors into the new rollout plan.

Methuen Mayor Neil Perry is among those frustrated by the lack of information.

“There has been little to no coordination with the state communication (team) on changes to the guidelines, and frankly, I can’t even tell how many vaccines are coming into my city by other methods, because no one appears to be tracking it,” Perry said. “And yet, the state announces — in my meeting with Commissioner (Monica) Bharel — Methuen to be one of the 20 most needy cities for vaccines for our underrepresented population. I ask you: How does that message align with zero vaccines?”

His statement references this week’s news that after holding two small-but-successful clinics for residents at The Loop in recent weeks, Methuen would not receive any new doses of vaccine, though the reasons why are conflicting.

After being notified, Perry said, he told city councilors at a meeting this week he was “mad as hell.”

“The plan in place forgets about our seniors. It has forced us to step in and create collaborations to make sure they get convenient access to vaccines,” said Minicucci, who represents the 14th Essex District which includes Haverhill, Lawrence, Methuen and North Andover.

Minicucci lives in North Andover and helped set up two vaccination clinics held in town Saturday — one at Merrimack College and another at the North Andover Youth Center. For those clinics, the town used doses provided by the Greater Lawrence Family Health Center.

She called the effort “herculean.”

“We had a Zoom call that was like the ‘Super Brady Bunch.’ There were four people from GLFHC, our town manager Melissa Rodrigues, the executive director of our housing authority Maggie Cleary, our public health nurse Caroline Ibbitson, me, and then we collaborated with the Youth Center and Merrimack for the space, which they immediately agreed to do,” she said. “We’re also working with The Kindness Collaborative and the North Andover Senior Center. That was just one instance, but now we’re going to have to continue to do this.”

But there’s a built-in deadline: Under Baker’s plan announced Wednesday, North Andover will no longer be able to hold its own clinics starting March 1.

It remains unclear, even after repeated requests for clarification by The Eagle-Tribune to state officials, if all vaccine clinics will remain operational in Haverhill, Methuen and Lawrence, or if they will be consolidated.

In Haverhill, Mayor James Fiorentini said Friday he does not want to have to send his residents to mass vaccination locations when local sites run out of doses.

“We have hundreds of residents without cars or (who) cannot travel,” Fiorentini said. “We cannot and will not abandon them.”

Still, Fiorentini said he looks forward to working with the state vaccination liaison appointed to assist with bilingual messaging and related outreach. His goal, he said, is to get 75% of the community vaccinated by July 4.

Neighboring Lawrence has developed a similar campaign under the guidance of Mayor Kendrys Vasquez. Bilingual leaflets blanket the densely populated city and a hotline is available for residents to call to book their vaccination appointments.

Vasquez plans to host a COVID-19 vaccination town hall event on Facebook Live using the “Office of the Mayor — Lawrence, MA” page Thursday at 6 p.m. to help keep residents informed. Local medical professionals will join him to discuss the importance of taking both doses of the vaccine, its side effects and answer other COVID-19 questions.

“We suffer a lot more than other communities do,” said Lawrence Board of Health agent Mike Armano, who is also the city’s inspectional services director.

According to statistics provided by the Greater Lawrence Family Health Center, 27% of Lawrence residents live below the federal poverty level and the city is designated as a “medically underserved area,” making it hard for residents to access care.

“It’s great to have mass vaccination sites pumping out high volume, but if the majority of people immunized are from places with .1% or low positivity rates, while cities like Haverhill or Lawrence can’t get supply into residents, we are not being ‘efficient,’” he said.