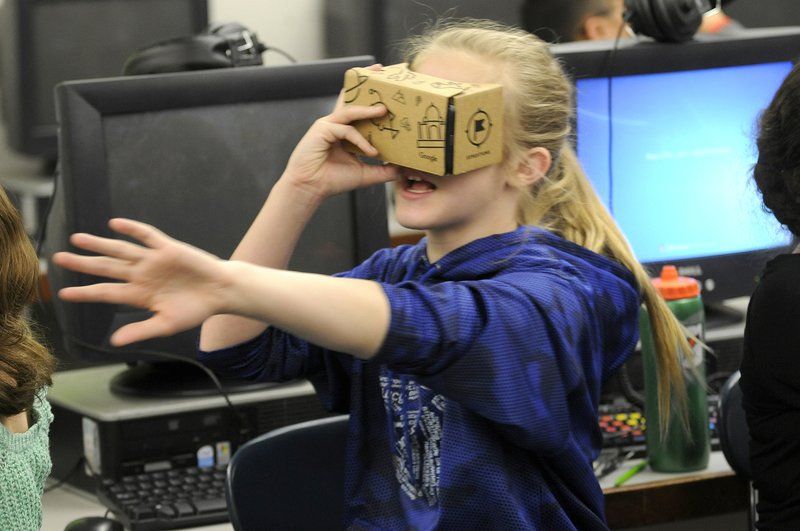 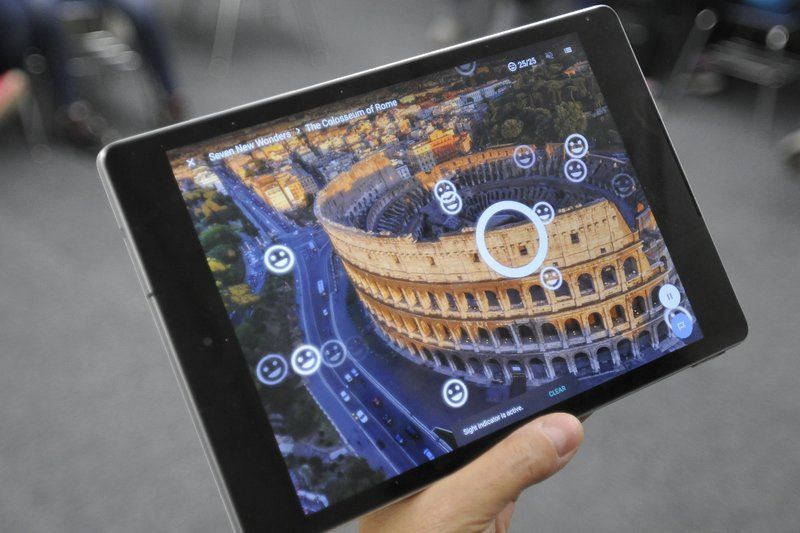 TIM JEAN/Staff photoKathleen Jeffrey uses a tablet to guide students as they look through a viewer to see a virtual reality field trip with help from Google Expeditions Pioneer Program at the Marsh Grammar School in Methuen. 3/23/16 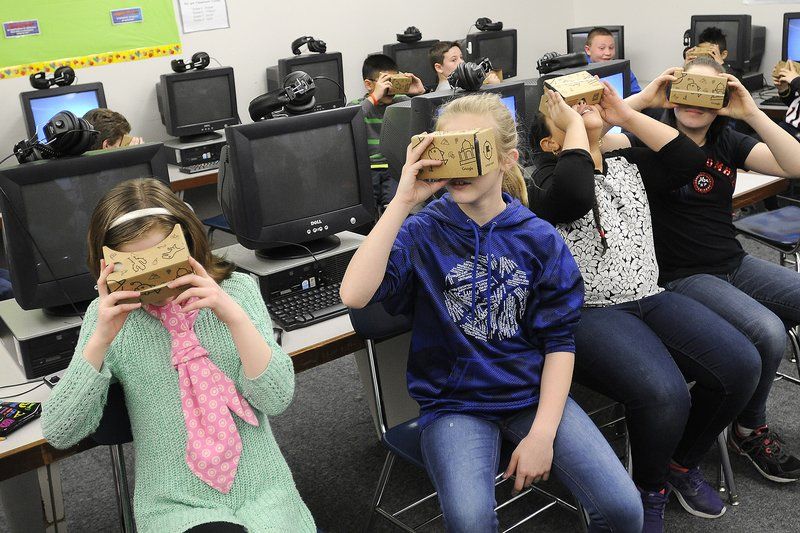 TIM JEAN/Staff photoFifth grade students look through a viewer to see a virtual reality field trip with help from Google Expeditions Pioneer Program at the Marsh Grammar School in Methuen. 3/23/16 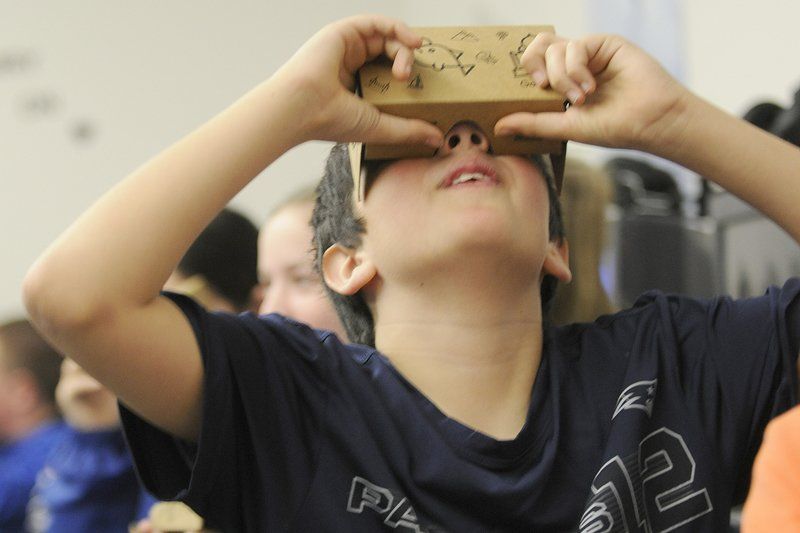 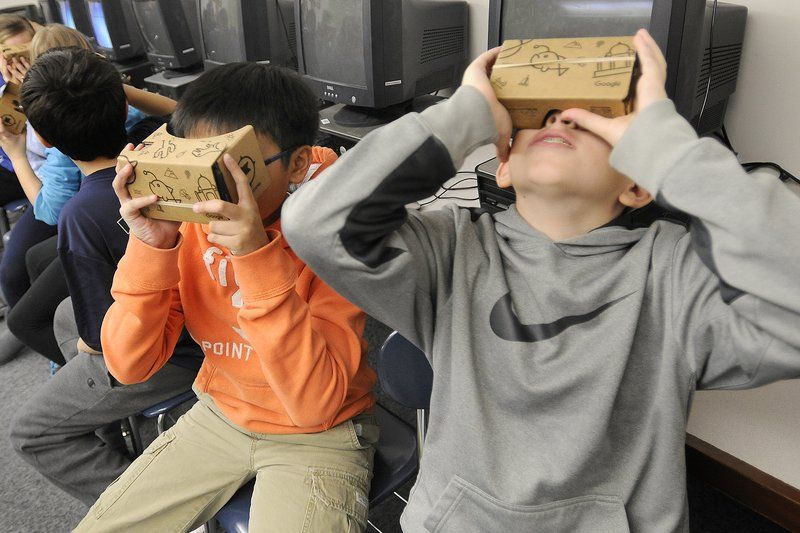 TIM JEAN/Staff photoKathleen Jeffrey uses a tablet to guide students as they look through a viewer to see a virtual reality field trip with help from Google Expeditions Pioneer Program at the Marsh Grammar School in Methuen. 3/23/16

TIM JEAN/Staff photoFifth grade students look through a viewer to see a virtual reality field trip with help from Google Expeditions Pioneer Program at the Marsh Grammar School in Methuen. 3/23/16

METHUEN — Braeden Robillard was in a roomful of computers, but he was facing away from them, his attention instead focused on the object resembling a cardboard viewfinder that he was holding to his eyes along with the rest of his fifth-grade class.

Marsh Grammar School technology teacher Kathleen Jeffrey stood before them, tablet in hand, ready to take students on a virtual exploration of the seven modern wonders of the world.

Within seconds, excited gasps and exclamations of “Whoa,” and “Oh my gosh” filled the room as students found themselves looking down on the Taj Mahal and a 360-degree view of the area surrounding the architectural marvel.

From there, they jumped to the Great Wall of China, the second stop on the about half-hour long virtual field trip, provided through the lens of Google Cardboard and the Google Expeditions Pioneer Program, which visited the school on Wednesday and gave students in fifth- through eighth-grades the opportunity to explore everything from famous architectural structures to shipwrecks and man-made reefs.

“It was cool because you get to go to places you were learning about that you wouldn’t have been able to see before, it gives you a better understanding of them,” said Robillard, 11.

Jeffrey, who worked with Google to bring the program to the Marsh school, was thrilled at the technological opportunities the Expeditions Pioneer Program afforded for students as well as with how excited and engaged they were with the virtual tours.

“This type of technology is going to allow us to take students to places they’ve generally only learned about in textbooks and put them there and let them free explore,” she said.

Jeffrey uses Google heavily in her technology classes, with students beginning to use Google products and services as early as third grade. She found out about Expeditions — a virtual reality program designed to broaden students’ perspectives beyond the classroom and bring certain concepts to life — and contacted Google just a few weeks ago to try and bring the program to Methuen.

They had an opening and Jeffrey worked with the school’s specialists, including art and health teachers, to organize and run the expeditions in scheduled blocks so that each upper school student would have the opportunity to participate.

“It’s another way to bring the amazing technology to all of our students and to keep current,” Jeffrey said. “It’s such an unique opportunity I didn’t want them to miss.”

Usually, a teacher can only take a classroom or a grade level on a field trip, she said. But with Google Cardboard, the cardboard viewer through which a smartphone is attached that runs the Expeditions programming, hundreds of students got the chance to explore places that normally wouldn’t have been possible.

“I’m so extremely pleased Google was able to come and give all of our 550 upper school students the opportunity,” she said.

The fifth-grade tour of the seven modern wonders, for instance, took students to the Taj Mahal, the Great Wall of China, the Colosseum in Rome, Chichen-Itza in Mexico, Petra in Jordan, Rio de Janeiro in Brazil and Machu Picchu in Peru. Jeffrey controlled the tour through the tablet, directing students toward certain points of interest with arrows on the screens and observing what they were focusing on through indicators on the screen of her device.

After their virtual tours, students used Chromebooks to map out their expeditions with pictures on Google Maps.

“It’s taking them out of the textbook and into the destination they’re learning about, it’s another tool teachers can use to make connections with their students to real life places,” Jeffrey said.

Upper school Associate Principal Robert Marino praised Jeffrey and the other teachers for being willing to think outside the box in connecting their curricula to technology.

“This was an amazing experience for kids to be able to see these important monuments and places in a way that goes beyond just a picture,” Robert Marino, noting how excited both students and staff were for the opportunity.

Virtual reality and similar technologies were something Marino said he could see being integrated into regular classroom work in the future, adding to the learning experience already provided by teachers. Even at their young ages, the students saw that potential as well.

Robillard, for instance, said the virtual tour helped broaden his understanding of each structure he saw by making the things he was learning about come to life.

His classmate, Kyleigh Norton, 10, agreed, citing Chichen-Itza and Machu Picchu as her favorite parts of the tour.

“It was really cool,” she said. “I’ve never seen something like that.”

Seventh-grade students Olivia Patturelli, 12, and Emma Daly, 13, traveled through the sites of sunken ships that had formed man-made reefs, including the SS Antilla Shipwreck off the coast of Aruba, and viewed the Underwater Museum.

“I was amazed actually,” Daly said. “I didn’t think shipwrecks could have this many living things on them.”

Patturelli said she saw classroom potential in using virtual technology to help teach “how everything forms and how ocean life and man-made things can form such beautiful things in the ocean.”

Seeing the shipwrecks come to life around her inspired Daly to want to learn more.

“By experiencing this every day you can stretch your learning on it and really understand the history behind it,” she said.

She added, “It’s really cool to see different parts of the world you wouldn’t get to see in real life.”