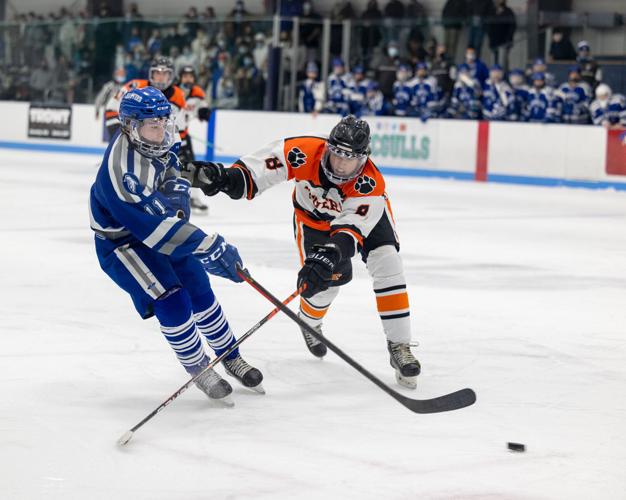 Danvers’ Jimmy Thibodeau takes a shot on goal while being defended by D.J. Bachini of Beverly during a game last month. Coaches of both teams were involved in an incident after their game last night. 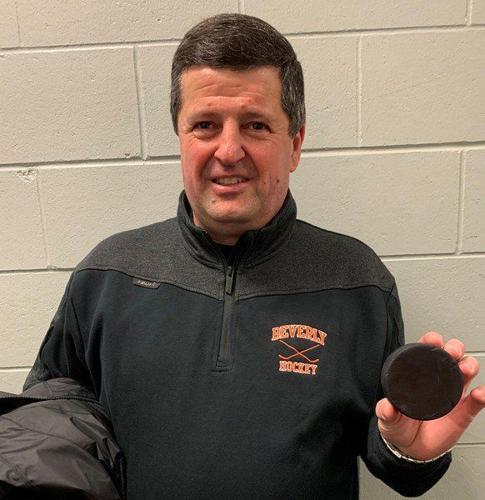 Danvers’ Jimmy Thibodeau takes a shot on goal while being defended by D.J. Bachini of Beverly during a game last month. Coaches of both teams were involved in an incident after their game last night.

MIDDLETON — An altercation broke out between the boys hockey coach from Beverly High School and one of the assistant coaches from Danvers High School Monday afternoon following a game between the two schools at the Essex Sports Center.

Beverly head coach Greg Fonzi put his two arms out and knocked down Falcons’ assistant Colby Mulry to the ice at center ice after the contest, which was won by Danvers, 2-1, in overtime.

After Jimmy Thibodeau scored to win the game for his team, the Danvers players and coaches formed a line near center ice for the traditional postgame handshake with Beverly. Fonzi waived his team off the ice and towards their locker room, later citing recent Massachusetts Interscholastic Athletic Association (MIAA) policies in regards to limiting postgame handshakes in order to help stop the spread of COVID-19 and the omicron variant.

Some teams in MIAA boys hockey follow this rule and line up at opposing blue lines after a particular game and bang their sticks on the ice or raise them up with one hand as an acknowledgement to their foes. Others do participate in the handshake tradition; in fact, when Danvers and Beverly played on Jan. 11 at Endicott College’s Bourque Arena, the teams did shake hands following a 5-1 Beverly victory.

Harsh words were reportedly exchanged after Monday’s game between Fonzi and some on the Danvers side, including Mulry.

“I sent my team off the ice, feeling it was the right thing to do,” Fonzi said afterwards. “They were celebrating their win fair and square, so I told my team ‘let’s go’ (off the ice). I walked over to (Danvers) to say ‘I sent them off, boys.’ They say not to (shake hands), so I sent them off.”

Fonzi then extends his hand as if he were going to shake Mulry’s, then turned as if to walk away. Mulry crossed the center ice line and got close to Fonzi before the Beverly coach pushed him backwards with two hands, causing him to fall to the ice.

Fonzi said he felt someone “spit at me from the side,” although he didn’t believe it was Mulry. He did say he pushed Mulry away from him because he was not wearing a face covering.

“I did something stupid,” Fonzi, who has coached the Panthers for the last three seasons, said. “Honestly, that’s my fault. I should’ve just walked off.”

The two game officials, who were at center ice to monitor the proceedings, immediately intervened and prevented anything further from happening. So did Beverly assistant coach Jim Sasso and several of the Danvers players, who along with head coach Kevin Fessette got their team off the ice quickly.

Fonzi, who has been coaching hockey for 32 years, said that there was “absolutely no intent to hurt anyone. I’m very sorry that I pushed him and that he fell.”

This was the third meeting between the two hockey teams this season, with the first contest taking place on December 22 (a 3-2 Beverly win).